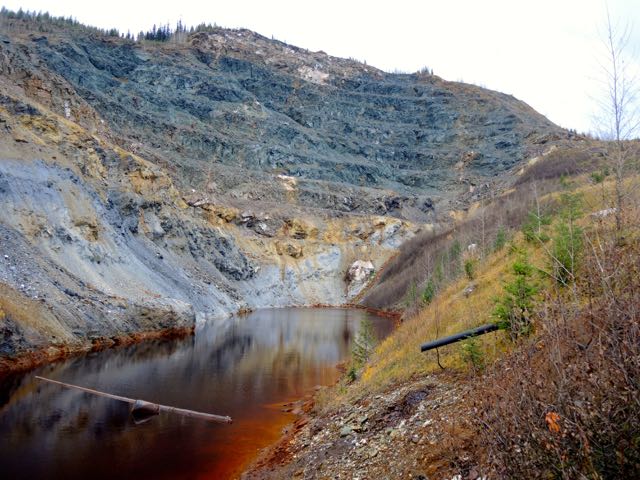 With the valuable ore removed, all that is left in the Samatosum mine’s open pit is rusty, acidic water

Given the elevated concerns about mine tailings after the Mt. Polley disaster, I recently took advantage of the opportunity for a tour of the Samatosum Mine reclamation site near Adams Lake. The open pit silver, lead, zinc and copper mine was in operation for just three years beginning in 1989 and produced some 566,000 tons of ore along with 9-million tons of waste rock and 542,000 tons of tailings. Despite its small footprint of just 189 hectares, the reclamation efforts took many years and resulted in the need for a water treatment plant that may be required to remain in operation forever. 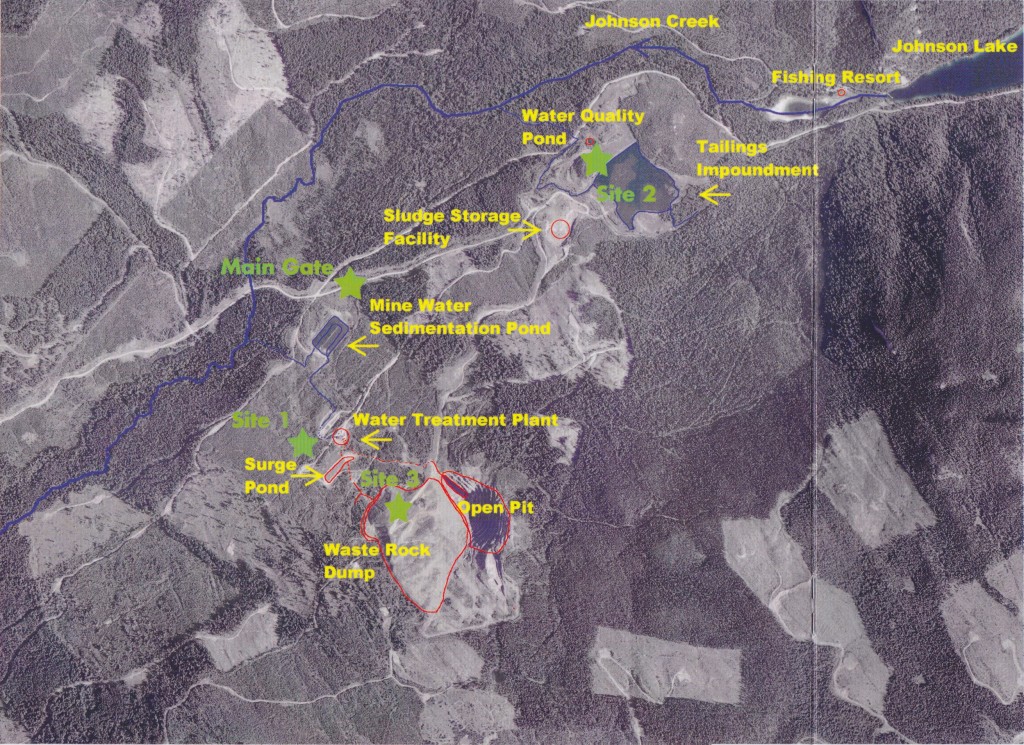 Most mines require a processing plant to operate alongside the pit or the underground tunnels to pulverize the ore and separate out the minerals from the surrounding rock, thus producing tailings. Often the tailings are acid generating rock and thus must be deposited in a tailings pond so that water covers the material and prevents it from oxidizing and thus polluting nearby waterways. At the Samatosum site, the dam for the pond was constructed in a natural gully with nearby moraine soils and the tailings were covered with water from a nearby creek, which now flows through the 10-hectare pond towards Johnson Creek. 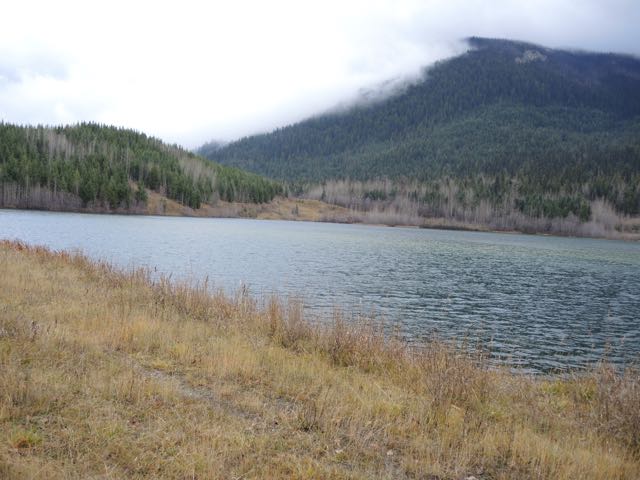 The 250 metre long dam is covered in grass and is completely stable with no chance of failure other than from a massive earthquake. The exiting water is tested often and has the same alkaline pH as the natural creek. And there are water plants taking hold in the pond, including some cattails. One of the maintenance projects is ensuring that the outlet is never blocked with debris.

The original mining company deposited the waste rock in layers on a slope adjacent to the open pit. The plan was for the layering of clean rock with the acid generating rock to prevent acid rock drainage from occurring. However, testing of the water moving through the waste rock and the open pit in 1996 showed that the plan was not working and thus BC Environment issued a control order for the construction of a water treatment plant. 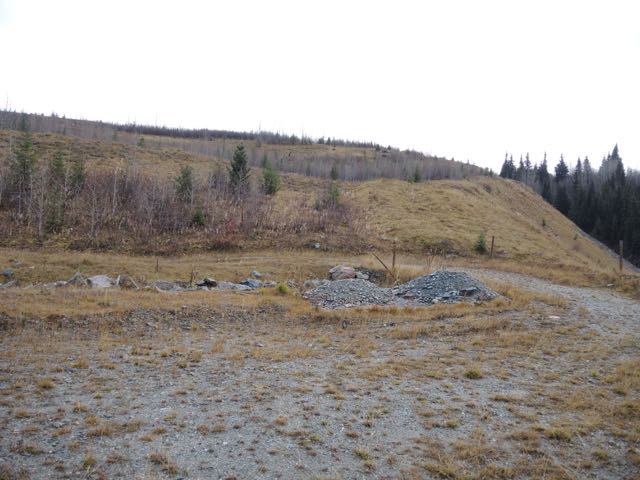 After visiting the tailings pond and the open pit, where the acidic water is stained brown from iron, the maintenance staff showed me the water treatment plant. Above the plant is a surge pond that collects the water before it flows into the plant, where the relatively simple process of neutralizing the water with lime is done using the latest in technology. The lime is mixed into a slurry, which is then added to a large tank with a slow moving paddle. The lime slurry precipitates a mineral rich sludge from the water and a small amount of sludge is added back to the tank which helps to maintain the precipitation process much like a grain of sand produces the pearl in an oyster. 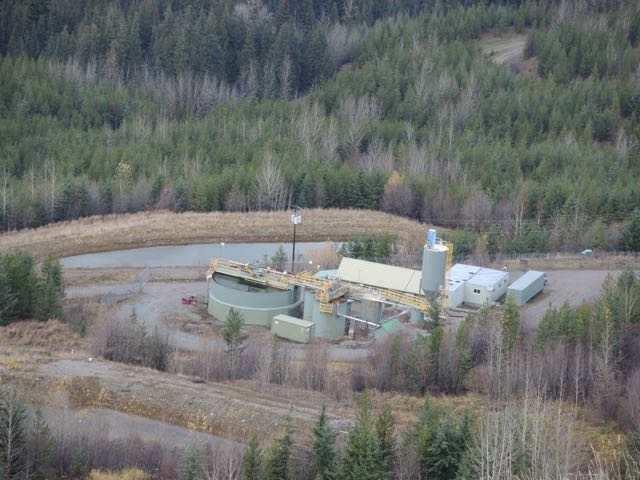 The waste water treatment plant. The tower holds the lime, which is mixed into a slurry and added to the water from the large tank on the left into the centre tank where the sludge is formed.

Before treatment, the pH of the water entering the system ranges from 3 to 8, and after treatment the water becomes slightly alkaline with a pH of 8, which is similar to the naturally occurring pH of Johnson Creek. The treated water is piped to a settling pond, that allows for any remaining minerals to settle out before the water is returned to the creek. 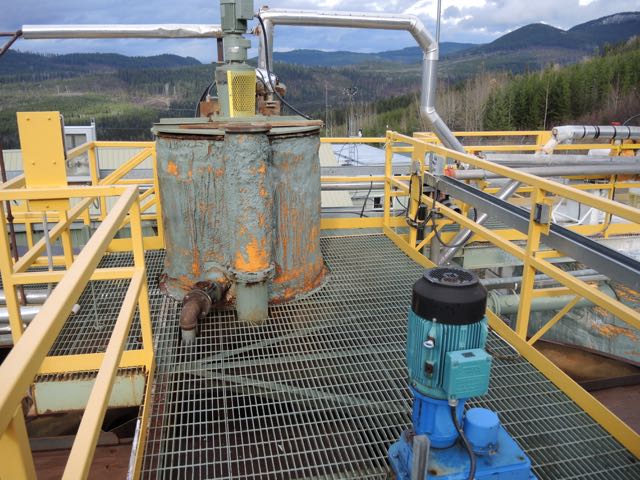 If the power is out, generators are used to run the equipment

The sludge is stored at the former mine milling site, and given the relatively small amount of sludge produced each year it will take decades before a vegetation cover is required. Nonetheless, various types of vegetation covers have been tested so that when the time comes, there will be a plan in place.

At the top of the steep waste rock hillside there are permanently installed mirror platforms that are used with survey equipment to measure any possible movement of the material. Problems with this hillside include gullying from erosion prior to the establishment of vegetation and minor slumping at the bottom began to occur in 2003. Consequently, the slope was re-contoured in 2008. 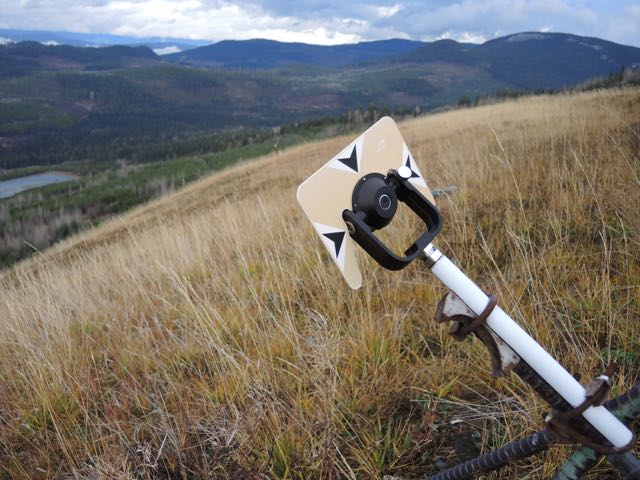 One of the mirror platforms installed on the waste dump hillside

The award winning reclamation of the Samatosum mine site, with its now well-established mix of grass, legumes, trees and natural vegetation, might be some consolation for the current owners of the site. However the responsibility for the operation has passed from one corporation to another whenever one mining company swallowed up another one. Sites like Samatosum are considered liabilities on the books of these companies and one can only wonder if the profits gained by three years of mining are sufficient to cover the maintenance costs that could be required forever.

The mine was first owned by Minnova and Rhea Gold. During the four years of operation, some 30 million oz. of silver were recovered and 22,500 oz. of gold. The estimated gross revenue for the first year of operation was 40 million dollars. The mine was owned by Inmet Mining when the reclamation work was completed and a tour was held in 2012. It is now owned by First Quantum Minerals Ltd., which only has operating mines in other countries.

When mining and the resulting reclamation work is done responsibly in suitable locations, as with the case for the most part at the Samatosum Mine, the impacts can be minimal. With profits from this mine likely over 100 million dollars, there must be enough money in a fund somewhere to ensure the water treatment work continues for as long as necessary. Also, according to the staff, if the company reneges on its responsibility, the government can access a bond that was set up to ensure the work carries on.