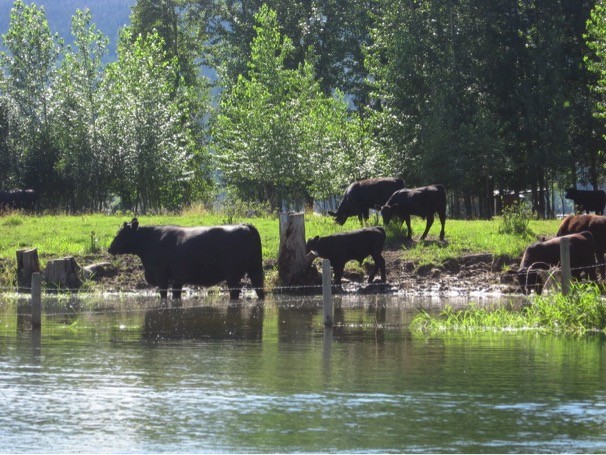 It is a massive report, through a modeling exercise, that provides detailed data about the sources of nutrients that enter Shuswap Lake and yet it leaves many questions unanswered. Produced by the environmental consulting firm, Tri-Star, the 2014 SLIPP Water Quality Report examines tributaries, authorized point-source discharges, natural sources and all seepage sites to determine where there are major concerns that can be minimized through improved nutrient source management. 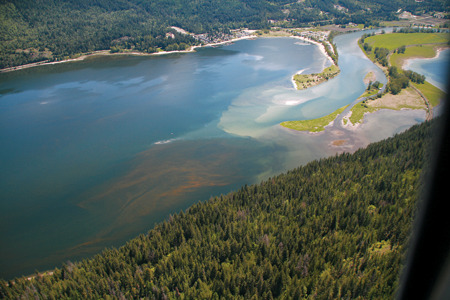 The impetus for the study was the two algae blooms in 2008 and 2010 in Shuswap and Mara Lakes, which were caused by an increase in nutrients, particularly phosphorus, which is considered a “limiting nutrient” because it encourages the growth of algae. Until the release of the report, there was no scientific evidence for the sources of the nutrients, which is needed for making informed management decisions.

The report makes use of the intensive monitoring of water quality that coordinated through SLIPP and on inferences from estimates that use established data from other jurisdictions. Natural sources of nutrients are examined such as salmon as well as non-natural sources from sewage treatment, houseboats, agriculture and forestry activities. 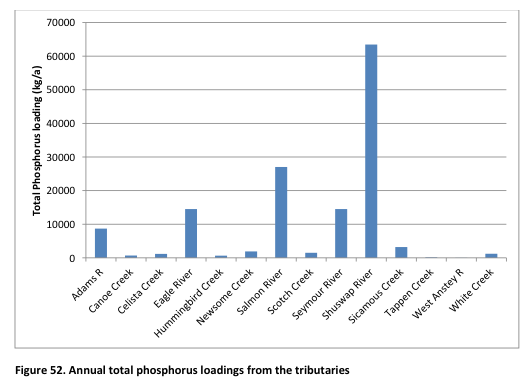 The major source of nutrients comes from the tributaries, each of which is analyzed in the report. And the largest sources are from the sub-drainages that contain valleys dominated by agriculture, the Shuswap River, Salmon River and to a lesser degree, the Eagle River. 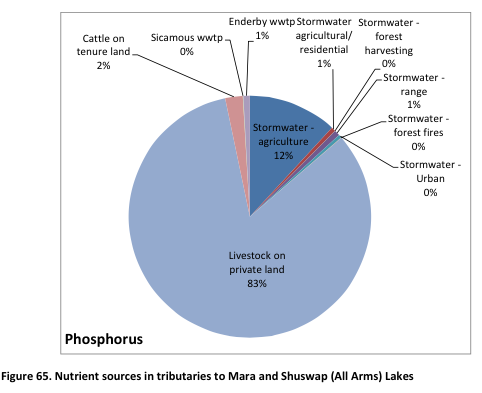 The report concludes that 95 percent of all the phosphorus entering the lakes comes from agriculture and of that, 12 percent of this loading occurs during storm run-off periods. The primary source of these nutrients is from cattle, given the numbers and size of these animals. The peak time for nutrient loading occurs during the spring run-off, from the approximate 9,500 cattle in the Shuswap River watershed and 8,300 cattle in the Salmon River watershed. 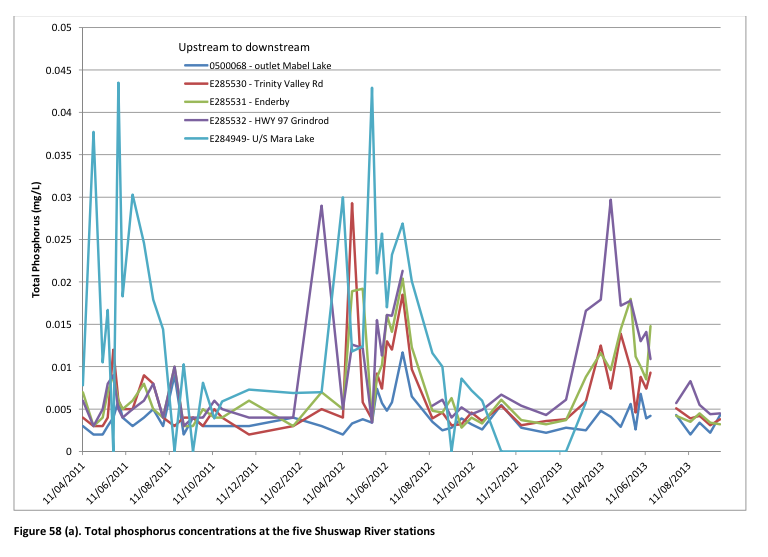 Note the spikes in phosphorus during spring run-off

The most precise data in the report is from the authorized point source discharges into the rivers and lakes from sewage treatment. By and large, the amount of nutrients entering the watershed from these sources is deemed small when compared to agriculture and given the dilution factors. However, the report points out that the discharges from the Enderby sewage treatment plant are significant and could be substantially improved if the system were upgraded. 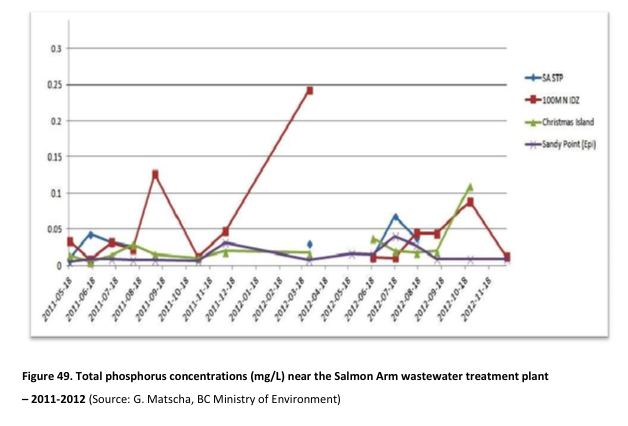 While the amount of effluent discharged from the Salmon Arm sewage treatment plant is the largest in the watershed, the amount of nutrients in the effluent is minimal given the quality of the treatment, thus the impact to water quality is considered to be minor. However, there is no data on other pollutants in the effluents such as cleaning agents and pharmaceuticals or the potential impacts of these chemicals. 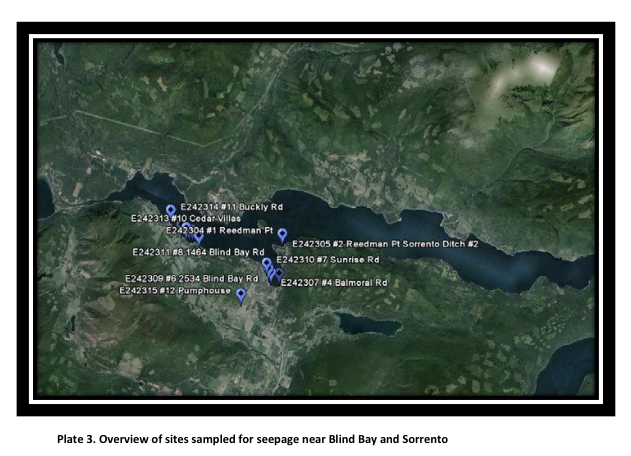 Septic systems close to the lake have long been identified as a major concern, especially those systems that are antiquated or poorly designed. Prior to the introduction of more stringent government regulations, dry wells were installed in many locations, which allows for the effluent to penetrate to the ground water and eventually into nearby streams or the lake. Testing of groundwater does show elevated amounts of nutrients and bacteria along populated areas close to the lake. The area of greatest concern is Blind Bay as the water flushes less often there than in the main arm of the lake. 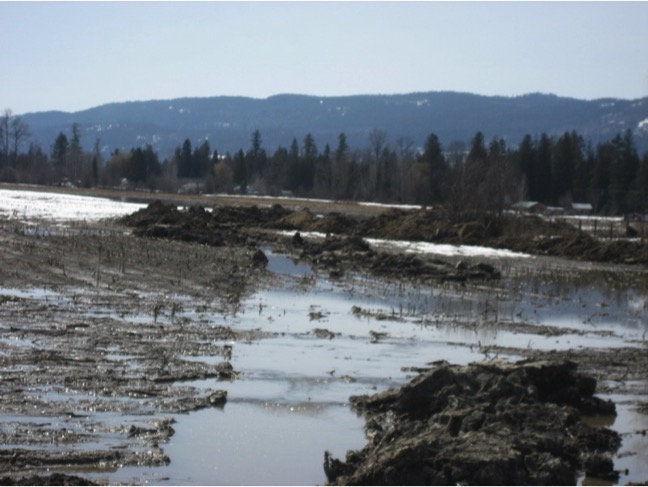 The overall conclusion of the report is that in order to minimize the outbreak of future algae blooms, effective action should be undertaken to reduce the amount of phosphorus entering the lake from agricultural operations. Secondarily, consideration should be given to providing tertiary treatment of sewage for Enderby.

The report, which can be read at www.shuswapwater.ca, provides ample data for three forms of nutrients, phosphorus, nitrogen and carbon, however it focuses on the impact of phosphorus while providing no information about how nitrogen or carbon impacts water quality. While it is critical to take action to prevent future algae blooms, there is no data about what appears to be increasing growth of algae, which boaters and swimmers have witnessed. Dead algae create slime on the bottom of the lake that covers rocks in some areas of the lake. Some testing has been done on algae growth, but the report does not include this information.

Given the rapid flushing of Shuswap and Mara Lakes, there is no need to fear the impacts that occur in other major lakes such as Lake Winnipeg where blue-green algae blooms fill the lake with toxins due to intensive agriculture. However, Shuswap Lake has definitely deteriorated in the past decades, as cattle numbers have increased and government oversight has decreased. Complaints about manure spreading on snow-covered fields have had some impact. Hopefully, this report along with further work by the Shuswap Watershed Council will result in improvements to water quality in the future.

There are reams of material written about Shuswap Lake water quality and it is no wonder, as the lake is the source of drinking water for so many residents as well as being the star attraction for summer visitors and long term residents. Yet, it has been easy to be complacent about water quality issues due to the vast amount of water in the lakes and the rapid flushing time. The algae blooms were a major wake-up call that has sparked action.

In the last few decades, large dairy operations have been established in the valleys, resulting in large amounts of manure being spread on fields during the winter, despite best farming practices that advise against this practice. Efforts are now being pursued to work with farmers to improve their practices, although some operators are resistant to change.

I have personally registered complaints that had been passed on to me by nearby local residents. Some of these complaints have resulted in infractions and resulting improvements. More work is needed and this effort will now be coordinated by the fledgling Shuswap Watershed Council that formed after SLIPP ended.

While for the most part, the lake water is clean and contains miniscule amounts of algae growing nutrients. However, boaters who leave their boats in the water over the summer report how the bottoms of the boats get covered in algae, and require cleaning in the fall, which apparently was not the case a few decades ago. As well, some areas of the lakeshore, particularly on the south shore, can have somewhat murky water and the rocks are covered with algae-like slime.

Salmon Arm Bay and Tappen Bay are particularly problematic, as the water there is mesotrophic, with far more algae growth. This condition is partly natural and partly a result of decades of intensive farming in the valley and sewage effluent release that had far more nutrients in it prior to upgrading.

At some point, local citizens may be asked in a referendum to decide if they support a special tax to fund the efforts of the Shuswap Watershed Council to improve water quality. This will take years to establish, but will be much needed and hopefully local taxpayers will support the initiative.