The potential for new trails above Celista

Home » The potential for new trails above Celista 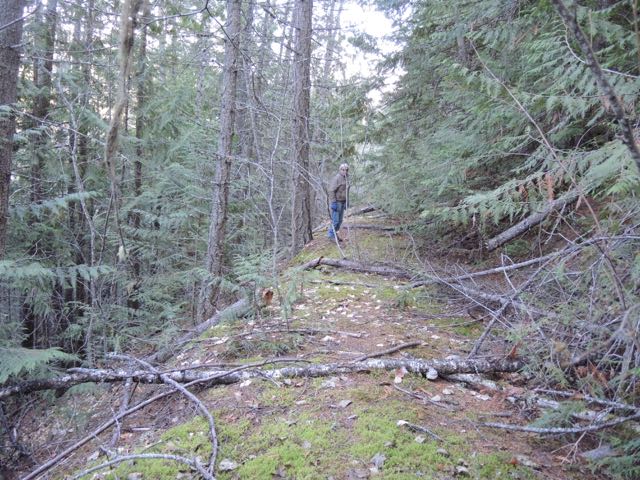 The Shuswap Trail Alliance, in conjunction with the CSRD, is always on the lookout for new trail opportunities and the recent mention of the potential for a trail above Celista sparked me into investigating the route. When the Area F Park Plan was first developed it included the option of acquiring a 40-acre parcel called Farrell’s Field. Since then, the CSRD acquired 22 acres of the property, where it now manages a popular outdoor ice rink. Recently, a friend and I explored the old trails in the forest behind the rink and the route between the park and Celista. 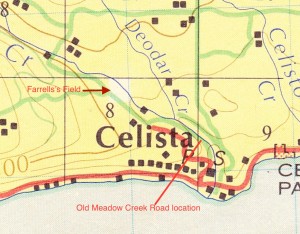 Little is known about William Farrell, the Welch immigrant who homesteaded the quarter section (160 acres) back in 1918. The remains of his buildings can apparently still be found on Leopold Road. At some point in time, the property was divided and one story claims he donated the land to the community, while another explains that the property reverted to the crown because the taxes were not paid. We may never know the truth, but regardless the land is listed legally as park reserve, and for two decades beginning in the mid-1970s, it was under the management of the community association. 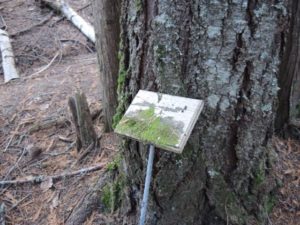 The signs installed by the Junior Forest Wardens are still there, but now with a moss covering

As soon as we entered the young forest behind the skating rink, we were impressed by the growth of the Douglas fir trees, as this is an excellent growing site. Some firs were already well over a foot in diameter and quite tall. We quickly found the remains of numerous old trails complete with directional signs and interpretive signs that were now molding away. The canyon trail headed to Meadow Creek, also known as Hlina Creek, but looked impenetrable due to the blow down. 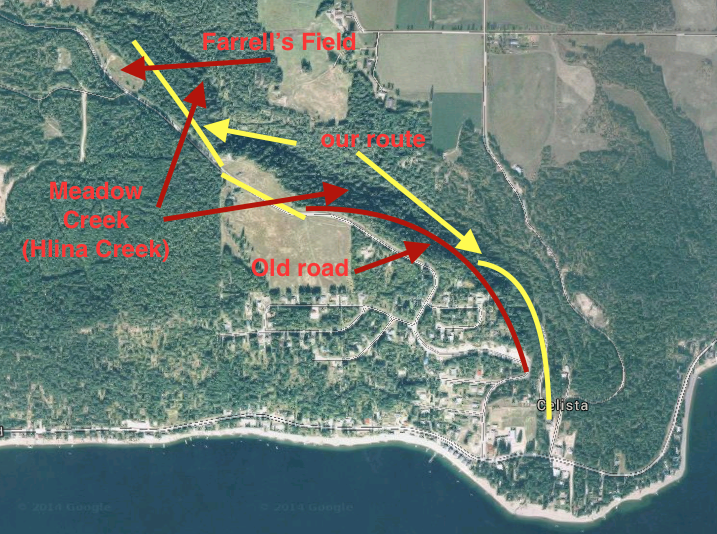 These trails were built by the Junior Forest Wardens sometime between the 1970s and the 1980s, and unfortunately, no one has been found that has any further details about this project. The lack of available information about a local community project raises concerns about the loss of recent historical record. While efforts continue to document the history of the settlement era, more recent history is being lost. As society is generally more concerned, with good reason, about the present and the future, we may indeed be losing knowledge about people and events from just a few decades ago. 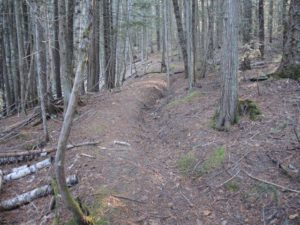 As we were interested in the potential trail between Farrell’s Field and Celista, we chose to hike alongside an ancient irrigation ditch that perhaps Farrell himself had dug from Meadow Creek to irrigate his fields. This route, which follows the contours of the land, ends at the public road, where the edge of the canyon adjoined private land. We were forced to continue hiking along the road until we walked passed the property to where we found an old road heading south. 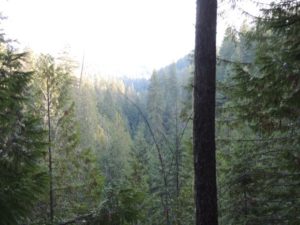 Hiking along the old road was fascinating from both an historical perspective and a geographical one. We were able to catch a glimpse of the canyon through the trees with the lake and the mountains in the distance. Parts of the old road were covered in moss and as expected, we were forced to work our way in places through groves of young trees and elsewhere over and under blow down. Closer to Celista we found a lower road and followed it to a local campground adjacent to the creek and next to the school. It only took us one hour and fifteen minutes to hike the route, despite the obstacles. 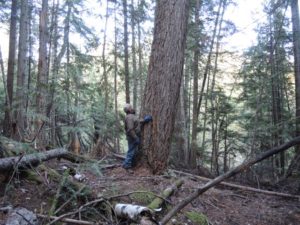 A 1979 Ministry of Environment map of this region shows two roads, the one we found that hugs the canyon and the existing road. North Shuswap old-timer Larry Speed recalls that his father opened the road in the mid-1940s, as it had a better grade than the other route and at times during the winter, chains were not needed. But eventually this old road was abandoned because sand was always sloughing off the bank and in the mid-1970s the existing road was rebuilt and improved when the Celista sub-division was built. 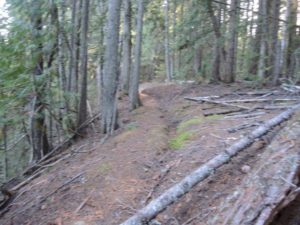 The Ministry of Highways cannot find any record of the old road, thus it would require an agreement with the landowners to create a trail there. Perhaps this would be possible if the landowners appreciated the health, historical, and tourism benefits that this trail would provide to the community. 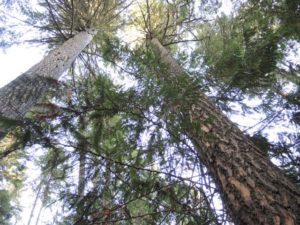 These two massive, fire-scared firs are hundreds of years old

Other trails would be possible, including one adjacent to the creek. The great-grandson of one of North Shuswap’s earliest pioneers, Ralph Bischoff, has many childhood memories of Meadow Creek. The Meadow Creek canyon was his haunt, where he hiked, fished and explored. Options now exist to restore the existing trails in the Farrell’s Field Park and add new ones alongside the creek and perhaps one day the old road to Celista could be opened up too. 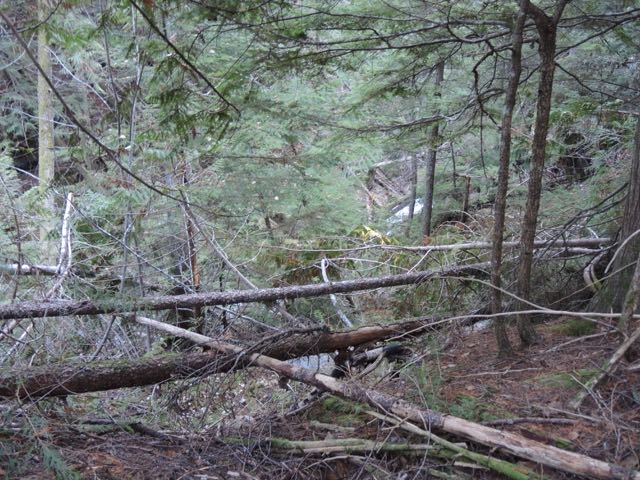