The sport where the stones slide to the house

Home » The sport where the stones slide to the house 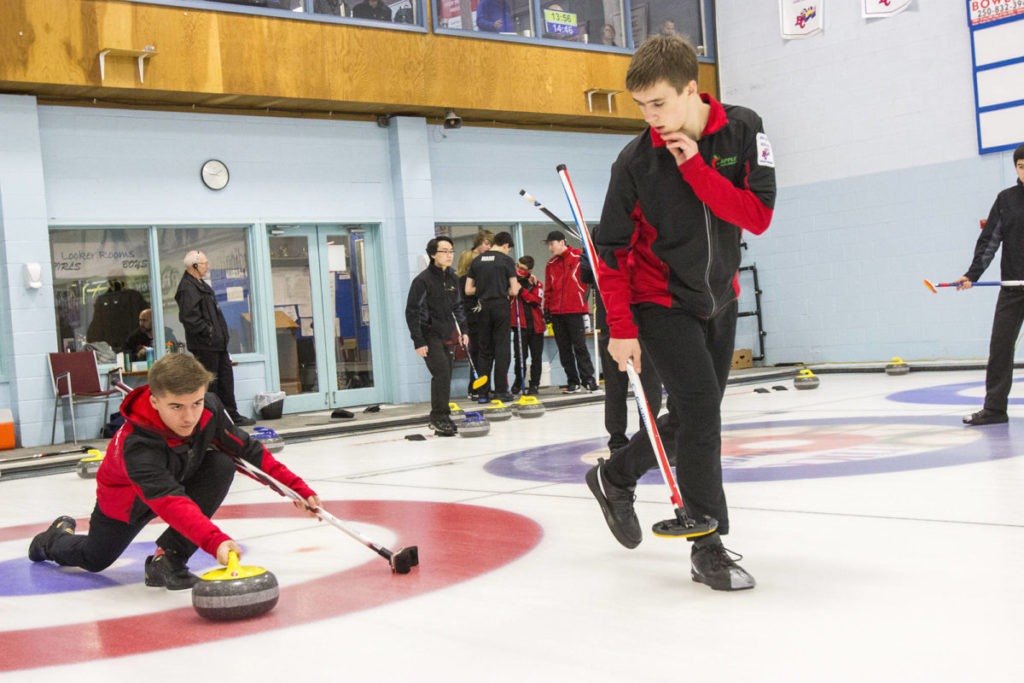 The sport of curling, often described as “chess on ice,” is an ancient game that began 500 years ago in Scotland. In Canada and in the Shuswap, the sport’s popularity is likely due in part to the large number of Scottish immigrants who settled here. There are curling rinks in every incorporated Shuswap community, as well as in Falkland and although the number of players has decreased over time, the sport continues to bring many people of all ages together to have fun competing and exercising. 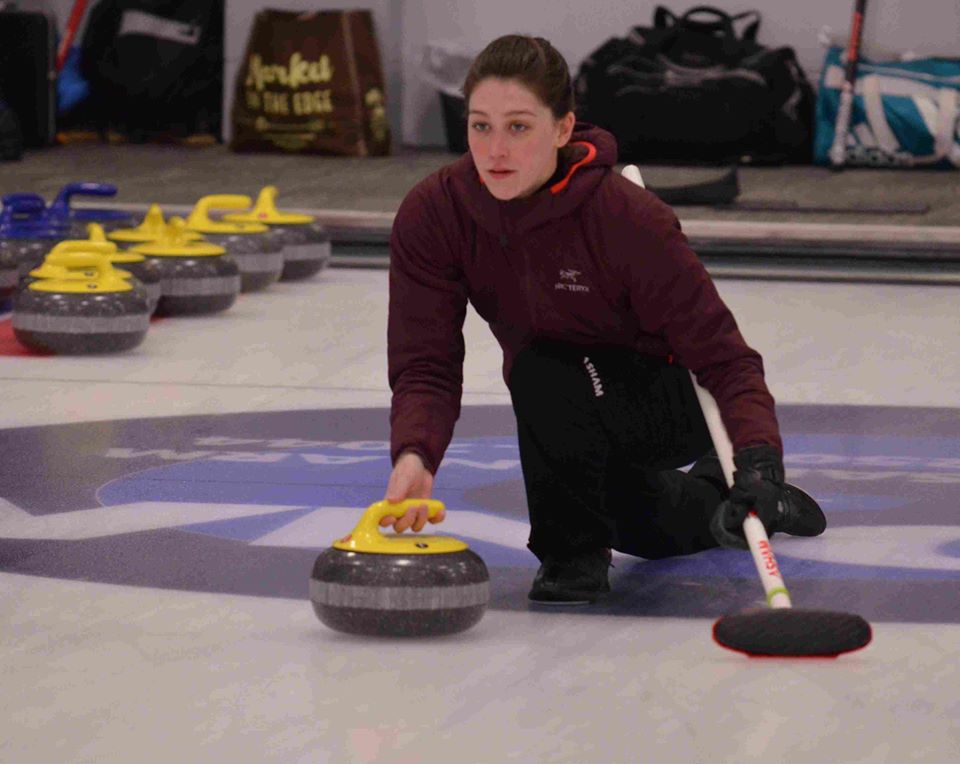 Salmon Arm boasts the largest curling club, where 415 members play in various leagues throughout the week. The club owns its well-designed building, which has six sheets of ice and a large lounge with a dance floor. Weekends are for bonspiels, the competitions that include teams from other Curl BC’s Region 4 communities. 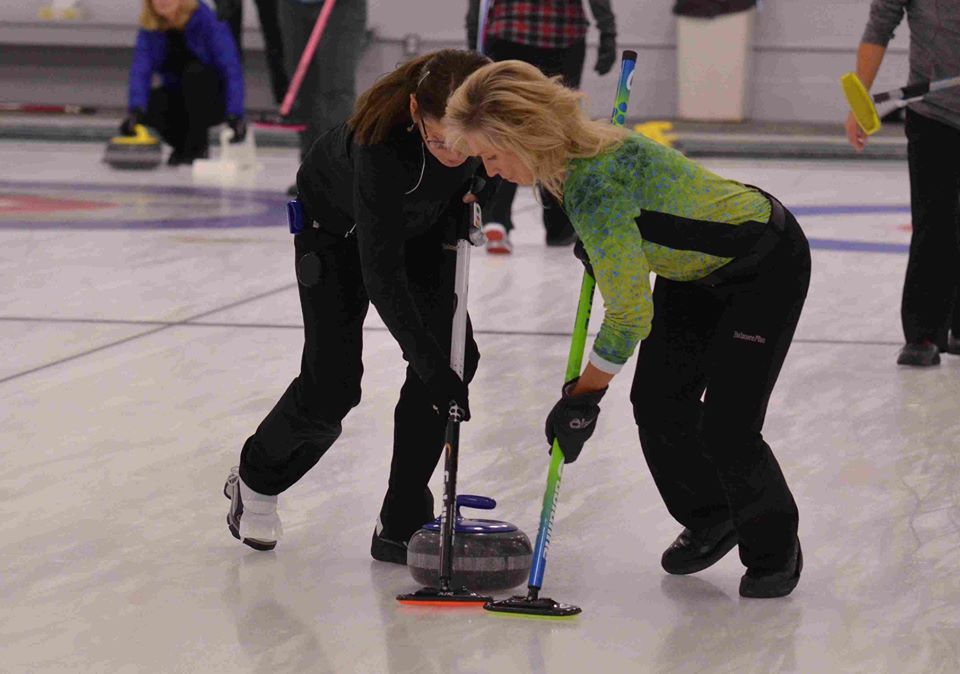 There are men, ladies, coed, and junior leagues with upwards of 13 teams in each one, as well as a stick league for players who are not able to crouch down on the ice to slide the stone. On any given morning or evening, all six sheets are filled with up to 12 teams playing, each with four curlers. One of most popular, the Tuesday morning mixed league, has 20 teams curling at ten and half-past noon. Following the games, many of the players enjoy socializing in the lounge for a few hours. 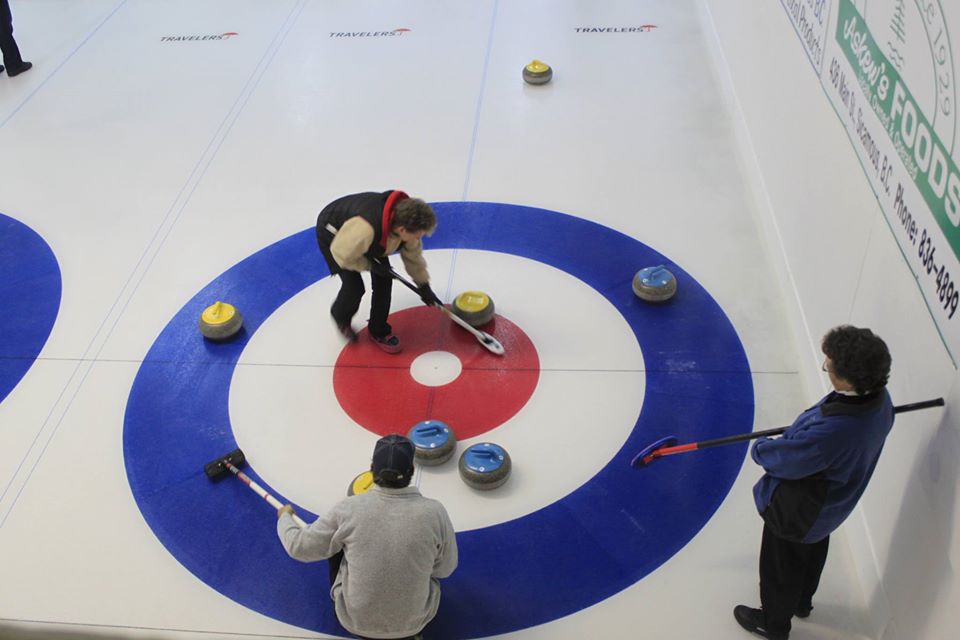 Curling is both a difficult and complex sport that requires a great deal of teamwork and strategy, as well as skill. Players must crouch down on the ice, push their body with one foot against the hack starting block, slide down the ice and then release the stone prior to the hogline, while twisting it to the right or left according to how it needs to curl in its trajectory towards the house goal or to hit the opposing team’s stone out of the way. Teammates then sweep the ice to increase the speed of the stone or control the route and the team follows the direction of their leader, the skip. It is no wonder that most clubs offer a learn-to-curl program, which happens on Wednesday nights in Salmon Arm. 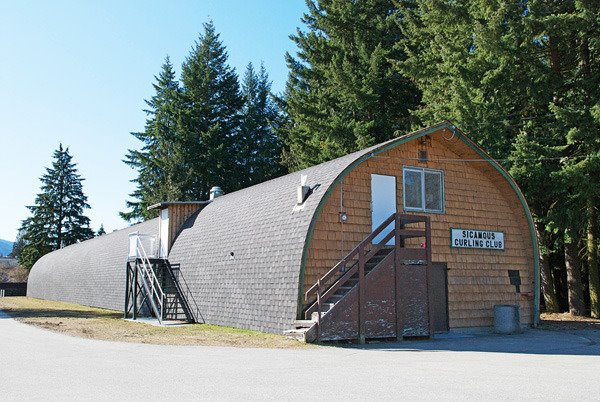 There are just two sheets of ice at the Sicamous Curling Club, which has seen a decline in membership and now has approximately 50 members. They currently have 8 women’s teams, 5 men’s teams and a stick-curling league. The club’s building, which benefited from over $300,000 in renovations in 2012, is now owned by the District, which lowers the costs for the club. Their future is uncertain however, as the building’s ice plant needs a $350,000 replacement, which would require outside funding. 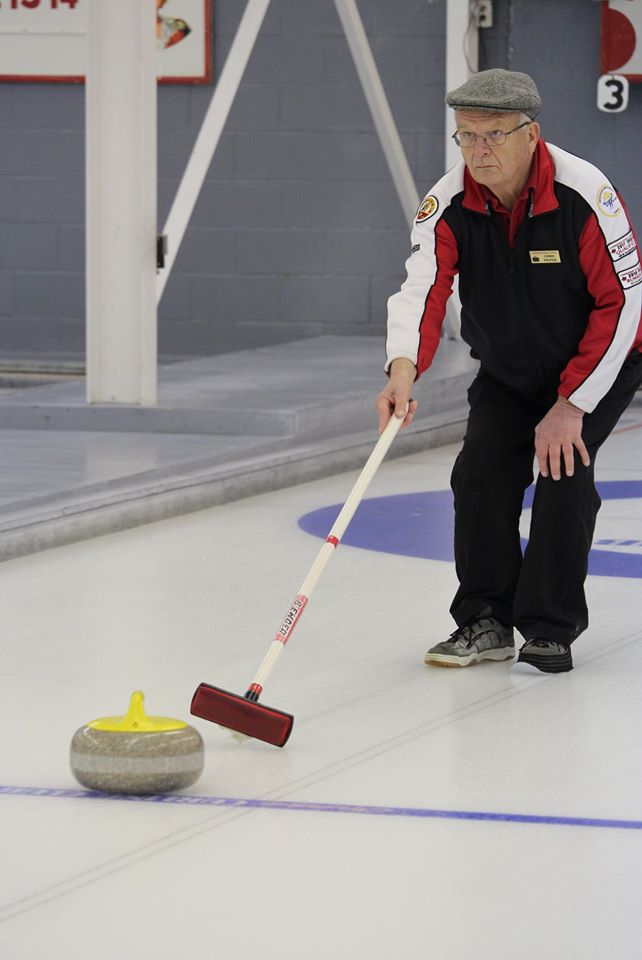 The Chase Curling Club has 4 sheets of ice in its building, which is also owned by the Village. They have 50 members and are eager to recruit more. Volunteers do one hundred percent of their operation, and they host fundraisers including a pancake breakfast held every second Sunday of each month except May. Currently they have two open leagues, a stick league and an after school junior league on Tuesdays. There is room for 175 people in the club’s lounge, which is often rented out for events, including weddings. 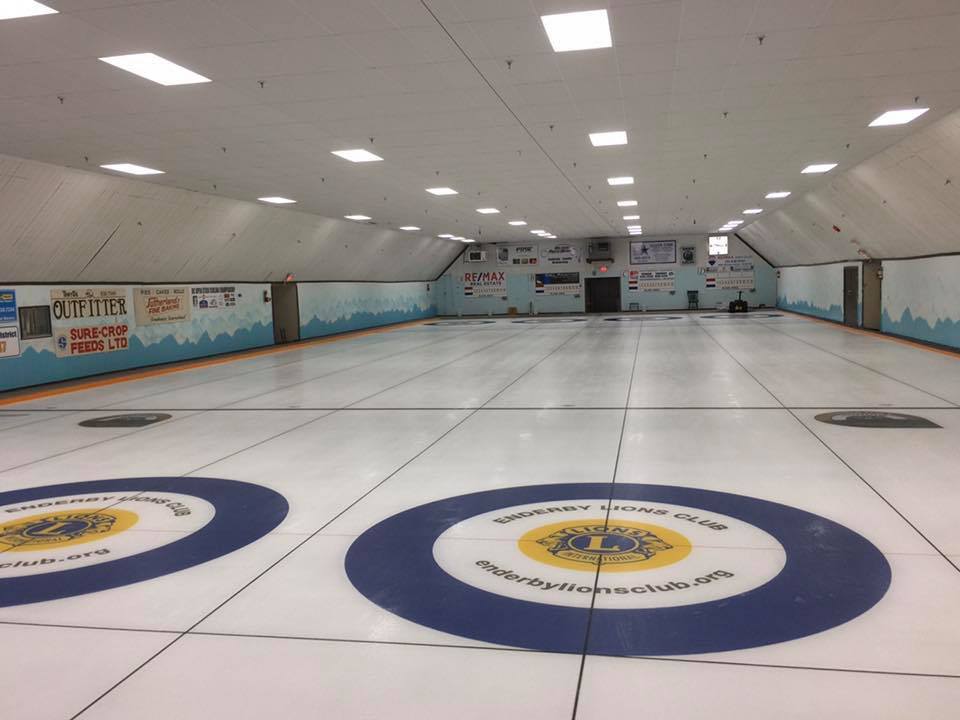 are four sheets of ice in the Enderby Curling Rink, which shares the building with the skating and hockey rink and it too is owned by the city. The club has 100 members and has a great reputation, as it is known for its hospitality and the immense amount of great food it serves players during their bonspiels. They offer a variety of leagues, including men’s, women’s, mixed, seniors, stick and open doubles where there are just two on a team. Their junior program is on Saturdays and is open to youth ages 7 and up. 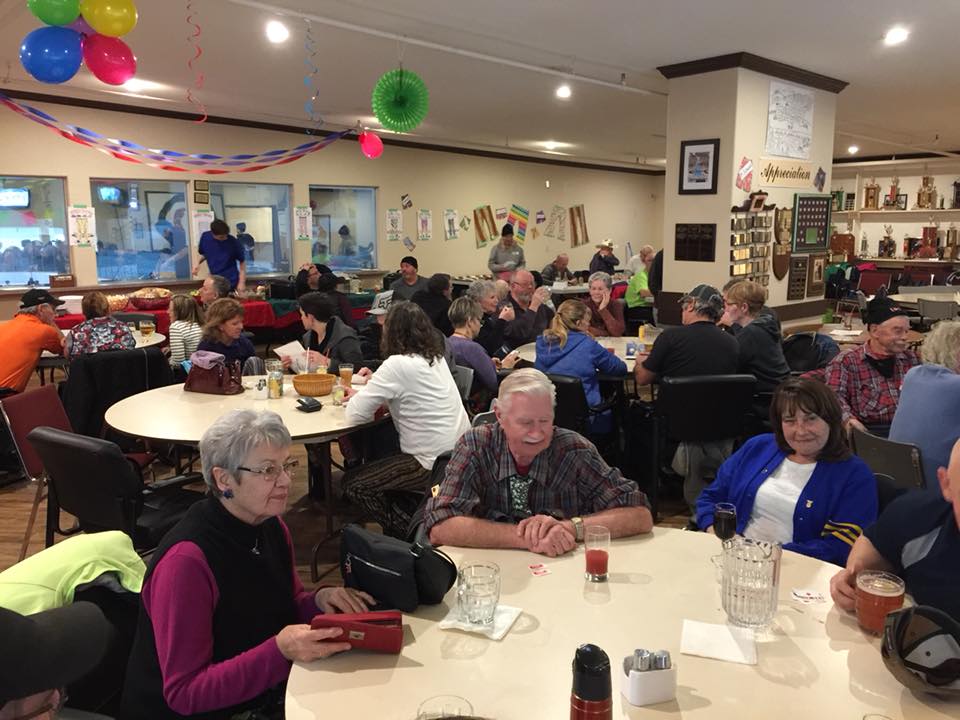 The two-sheet Falkland rink was built in 1967 with Canadian Centennial funding. Despite its declining membership numbers, the club keeps going thanks to the dedication of its remaining members. They have three leagues including a mixed league with seven teams that play twice a week. At the end of February they will host a bonspiel with teams from Winfield. 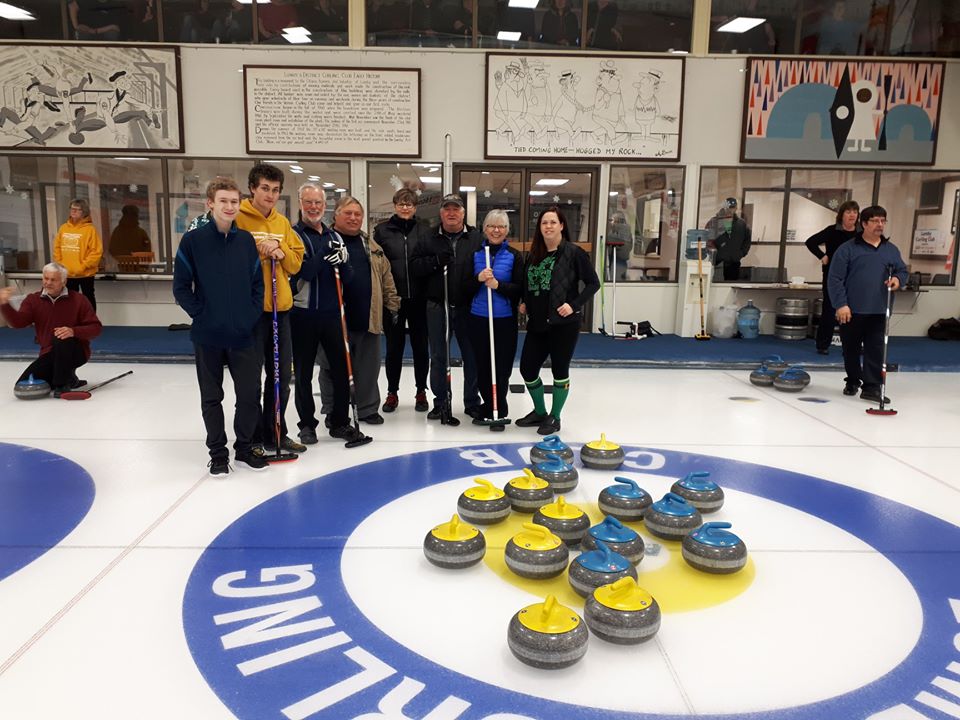 Curling is very popular in Lumby, where the 4-sheet rink is owned by the regional district and rented out to the curling club. Many of the 125 members of the club also assist with the operations as volunteers. There is a variety of leagues that fill the club nearly every evening and during Tuesday, Thursday and Saturday mornings. The local school offers a curling program for grades 5 and 6, where students learn to curl at the beginning of each season. 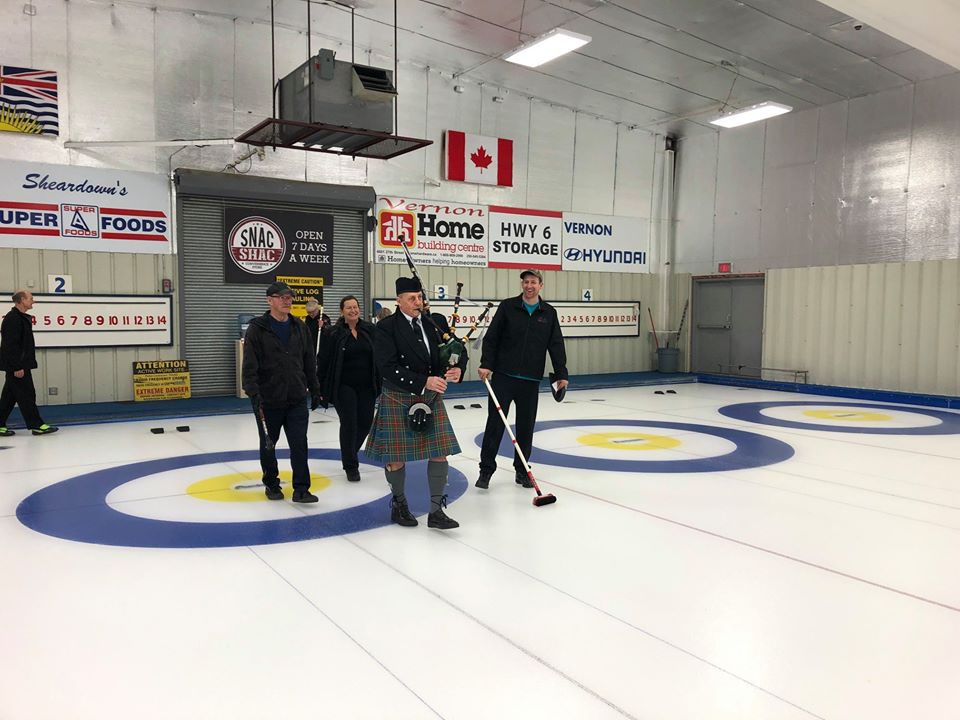 The Lumby Curling Club hosts three bonspiels each year, including one sponsored by Anser Manufacturing that offers over $10,000 in cash and prizes and brings in teams from other communities.

The curling building is also used as a community centre and sometimes there are meetings or parties at the same time there is curling. As well, the high school graduation is held there and the building is used for Lumby Days. There was an earlier club building, a two-sheet rink built in 1961 by volunteers. It was torn down in 1980 and some of the materials were used in the new building.

In November, The Salmon Arm Curling Club held its 24th Annual Curl for Cancer tournament, with the theme, “goes to the movies.” Teams dressed in costumes from various movies.

Nathan Murphy was the Snow White to the rest of his team’s seven dwarves at the Curl for Cancer event held at the Salmon Arm Curling Centre on Sunday, Nov. 3. (Jim Elliot/Salmon Arm Observer)

Last month, a Salmon Arm Curling Club bonspiel attracted 44 teams, including some from the Okanagan. A local team took the championship for the men’s division, while a team from Vernon took the top prize for the women’s division.