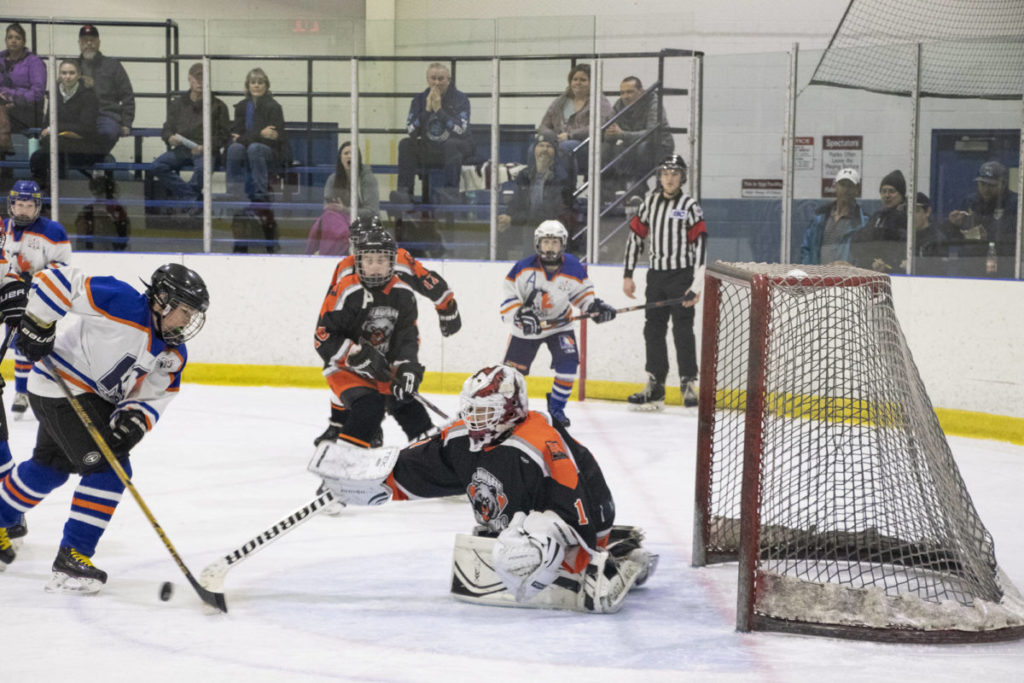 Mostly gone are the days when playing hockey meant strapping on the used skates, grabbing a wooden stick and heading down to the frozen pond or lake to play with friends. Today, hockey is almost always played in arenas and is highly organized, expensive and yet every bit as engaging, exciting and character building. Thanks to the dedication and commitment of a legion of volunteers that work with the Minor Hockey associations and generous local sponsors, hundreds of young people spend many hours on the ice practicing, playing games and participating in tournaments from September to April every season.

Youngsters begin at the ages of five or six in the initiation program (U7), where they learn to skate and then graduate into the Novice division (U9) at age eight or younger. By the time they are ready for the next level, the Atom division (U11), there are two streams, the recreational league and the rep league, which requires try-outs, is for more serious players and involves more ice time.

The next level for young hockey players is now called Peewee and is for ages 12 years and under. It was likely this name that rankled some parents, as beginning next year all the age-division names will be changed to reflect the age, with Peewee becoming Under-13 or U13 and so on. The last two age divisions are now called Bantam (U15) for age 14 and under and finally Midget (U18) for age 17 and under. Hockey is no longer just for boys, as girls can either play on a regular team, which are deemed Co-ed, or on one of three female teams. 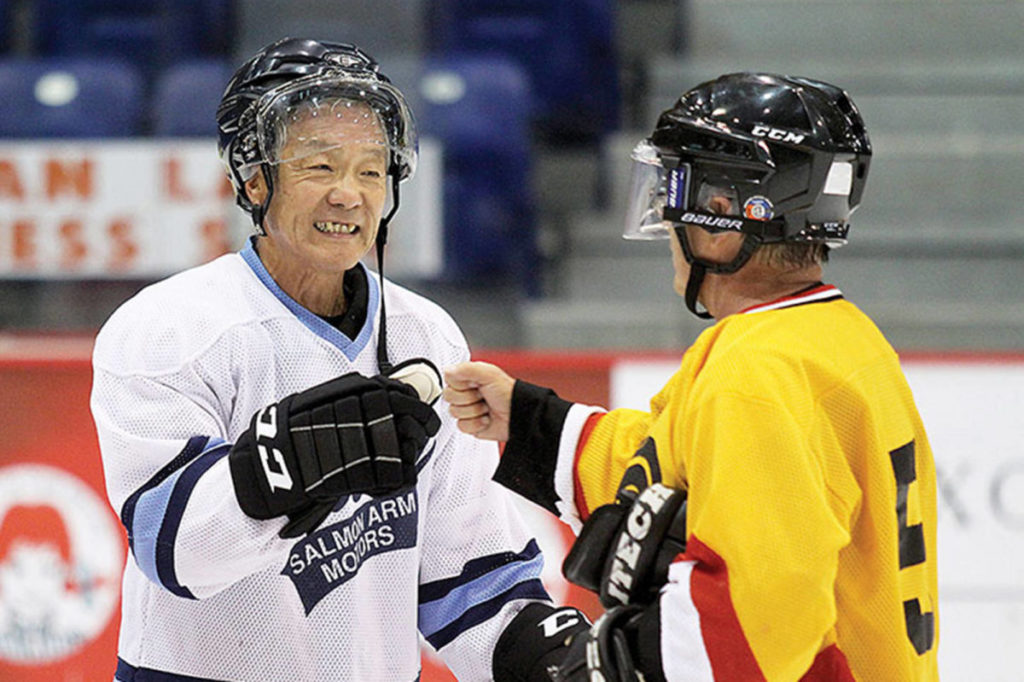 Roy Sakaki and Gord Mackintosh congratulate each other after a game in the Vernon Senior Oldtimers Hockey Harvest Jamboree. Photo courtesy of the Salmon Arm Observer

This year is the 57th season for the Salmon Arm Minor Hockey Association (SAMHA), which has adopted the same grey, black and white colours for the rep teams of Salmon Arm’s Junior A team, the Silverbacks. There will be over 14 tournaments this season, with 6 to 16 teams participating in each one. Juggling all the schedules for these games, as well as the ice times for all the division teams is the responsibility of the SAMHS administrator, Roy Sakaki. During tournaments when the two ice sheets are fully booked, he has to divert some games or practice sessions to the Chase, Enderby and Sicamous arenas.

Minor hockey provides a welcome boost to the local economy. The many players who come from the Okanagan, Cariboo and the Kootenays often arrive with their families, stay in local hotels and eat in local restaurants. Shuswap teams also spend many weekends travelling to play in tournaments elsewhere.

Many young players who excel at the sport dream of one day joining the NHL, even though so far only six or seven from Salmon Arm have made it to this level. Another goal is to play in a Junior A team, as many of these players achieve full scholarships to attend universities and play on their teams. Occasionally, a scout will pick a young player from a Bantam (U-15) team, who could then be drafted and sent to Edmonton. 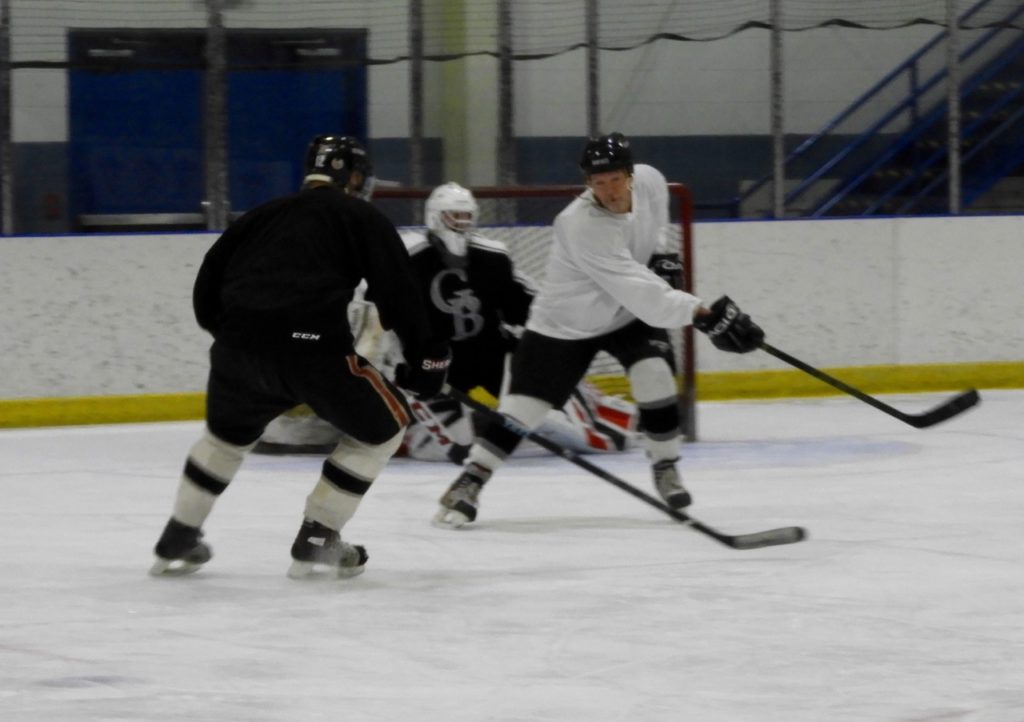 Local arenas are not just for kids, as old-timer hockey is also very popular. In Salmon Arm there are four groups, each with four teams with players aged 55 to 79, including Dennis Adams who is still playing at the age of 87!

Thanks to the efforts of many volunteers and the regional districts, kids and adults once again have the opportunity to skate and play hockey for free at four outdoor rinks in the Shuswap. Volunteers first flooded the Farrells Field rink above Celista in 2007. Years later it became a CSRD park and is now well used by the North Shuswap community. There are also outdoor rinks in community parks located in Sorrento and Silver Creek, as well as in Cherryville. Of course, these outdoor rinks are weather dependent and as the planet warms, ice time becomes limited. 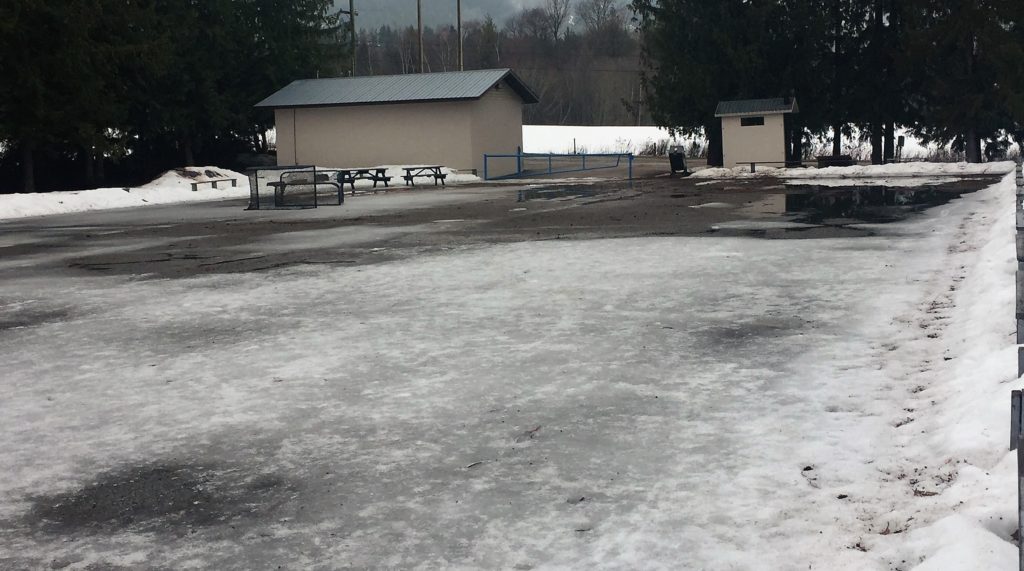 Blind Day/Sorrento Park ice rink, As of Jan. 2, 2019, the ice rinks were not ready yet due to warm warm weather, photo courtesy CSRD 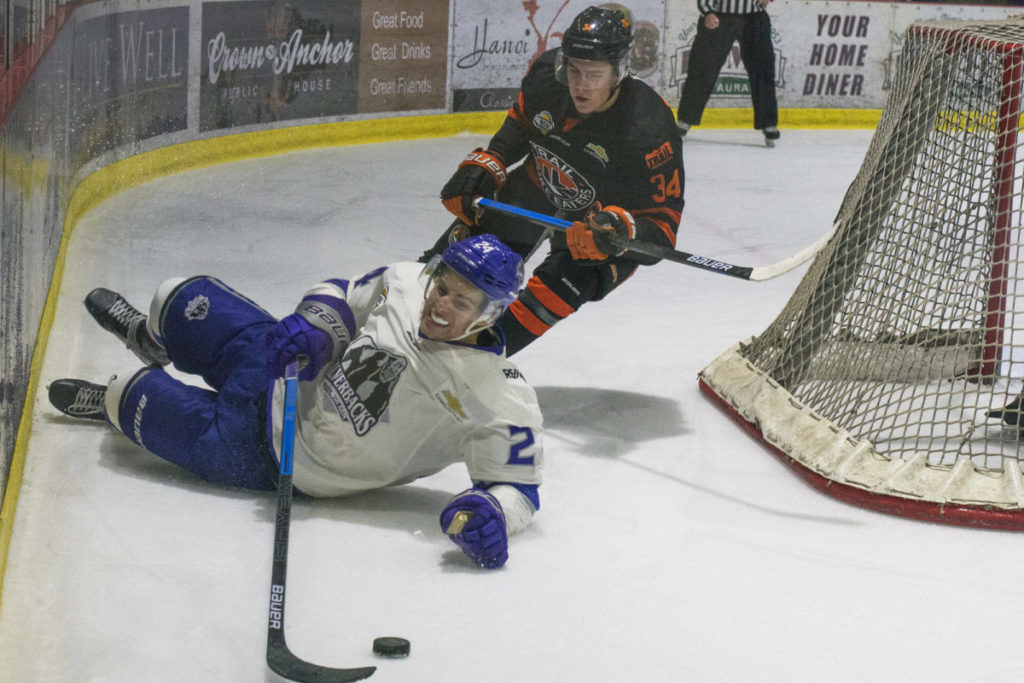 This Silverback player, while down on the ice, was still trying to hit the puck, photo courtesy of the Salmon Arm Observer

We attended our first Silverbacks game on Dec. 8th when they played the Trail Smoke Eaters. It was an exciting game, with Trail initially in the lead. In the second period, the Silverbacks took control and ended up far in the lead at 7-4. When they scored their first goal, hundreds of teddybears were thrown out on the ice and then were collected by the team with the help of two trucks. While this is a wonderful, generous effort to provide toys for underprivileged kids, it is a sad reflection on our society that there are so many low-income families in the community. 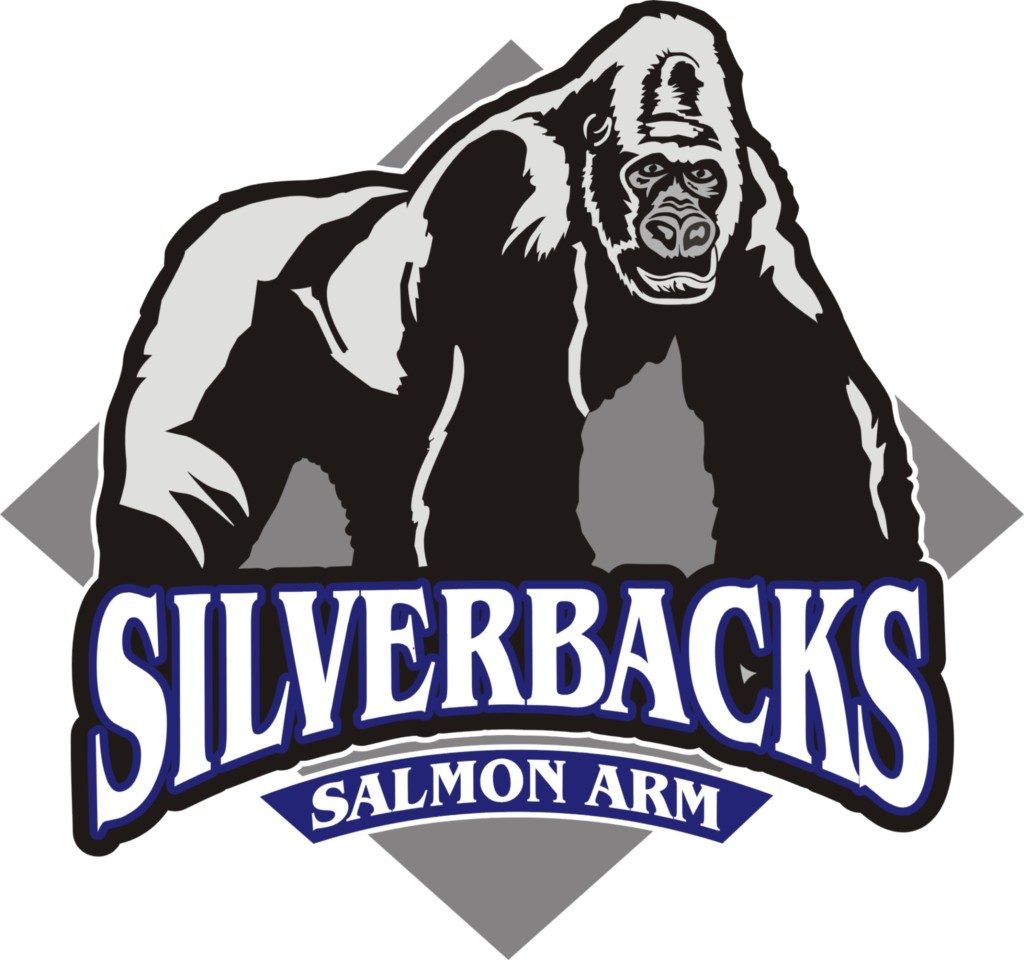 I was surprised to see how much fighting there was in the game, as I thought this rude behaviour was only seen in pro-hockey. It can be a rough game, with players knocked over or slammed into the sideboards. It seemed like the Trail team was usually the first to start punching and the Silverbacks players were forced to respond. As a result, players had to spend time in the penalty box.

In September, Salmon Arm Minor Hockey Administrator Roy Sakaki was named a Hockey Ambassador by Hockey Canada. A representative from the national organization came to Salmon Arm to film Roy and the video shaws his family history and details his 60 years of hockey experience including playing, coaching and running a hockey academy. Learn more and watch the video here: Mr. Hockey