The early days of hockey in the Shuswap

Home » The early days of hockey in the Shuswap 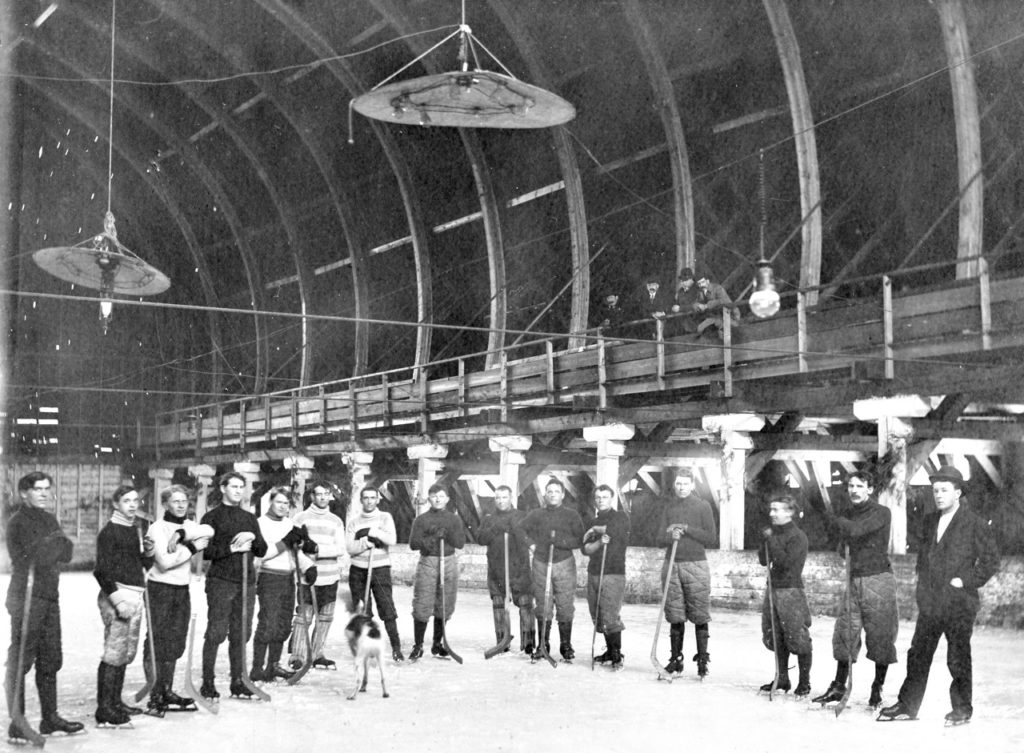 Lined up for a team photograph when hockey was a game, not a callous business, in Salmon Arm’s original arena. Circa 1914. From “Fleeting Images,” Courtesy of Douglas Ruth and the Salmon Arm Museum at R.J. Haney Heritage Village

Just as Canada could be deemed a hockey nation, so too is the sport so very popular here in the Shuswap. Throughout the season, many hundreds of players of all ages are on the ice in one of the region’s five arenas in Chase, Salmon Arm, Sicamous, Enderby and Lumby. The sport also has a rich local history complete with community teams, arenas and outdoor rinks, tournaments and championship awards that date back to the early days of settlement.

The region’s first arena was a private facility built by Andy Baird in 1904 adjacent to the Shuswap River near the Enderby brickyard. As with all the early rinks, the ice was dependent upon the weather and warm winter temperatures were a common problem that cancelled many games and practices. 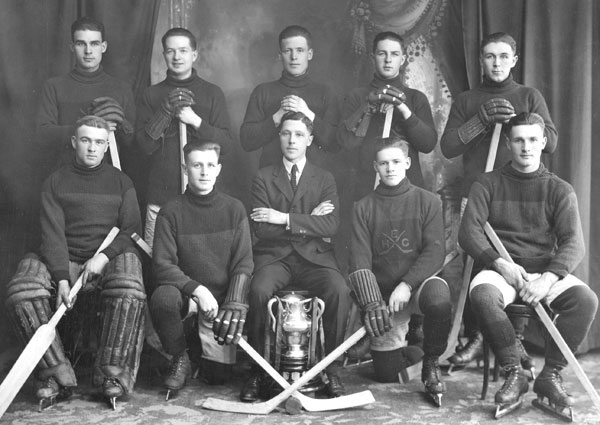 Efforts began in 1910 to build a public arena in Enderby, which was finally constructed after the First World War in 1921. The focus on the sport in Enderby no doubt contributed to their team’s success on the rinks, as they won the first Coy Cup in 1923, which was the trophy donated by Colonel Coy for the B.C. Amateur Hockey Association championship award. 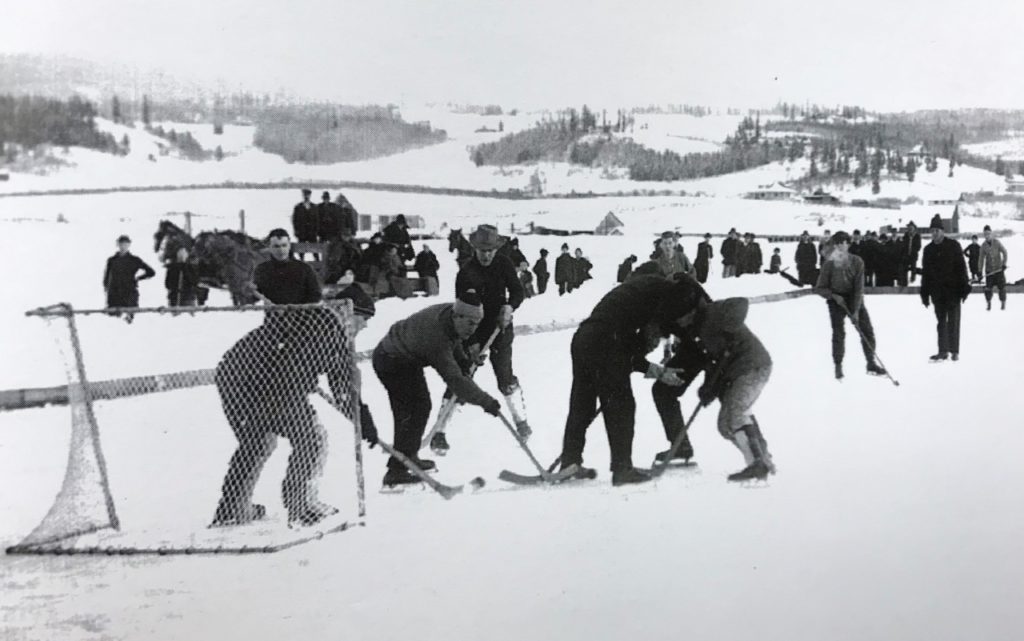 “Married me vs. Single”, circa 1910 on the Salmon Arm lakefront, From “Fleeting Images,” Courtesy of the Salmon Arm Museum at R.J. Haney Heritage Village

The first arena in Salmon Arm was built in 1914, doubled as a stockyard shed for the Fall Fair Association and was also used by the curling club. It was a grandiose building with a high arch ceiling, but by the mid-thirties the structure was deteriorating. It burned down in 1942 and teams were forced to use outside rinks. 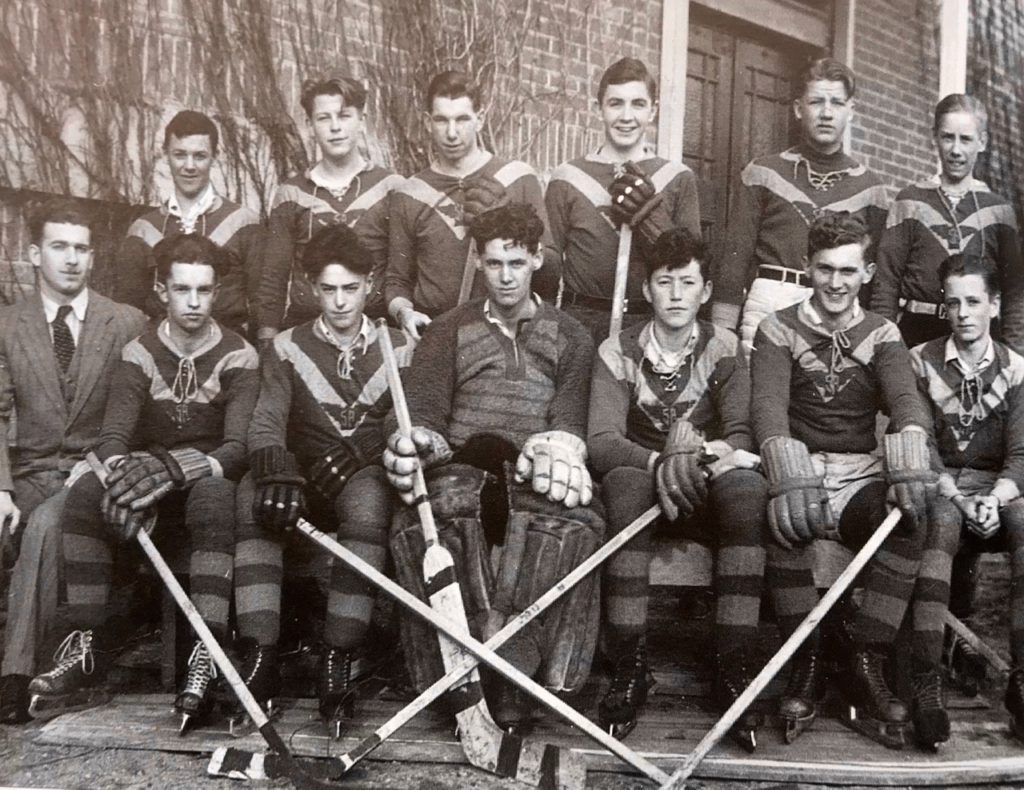 The book Fleeting Images has a number of photos of the early hockey teams posing with their awards, including the high school hockey team, the Tavern All Stars, and “legendary” Maw’s Jam Eaters, which won the city league title in 1940 and was undefeated in 1943-44. Another early team, the Salmon Arm Aces included imported players who were paid $15 a month and given free rooms. 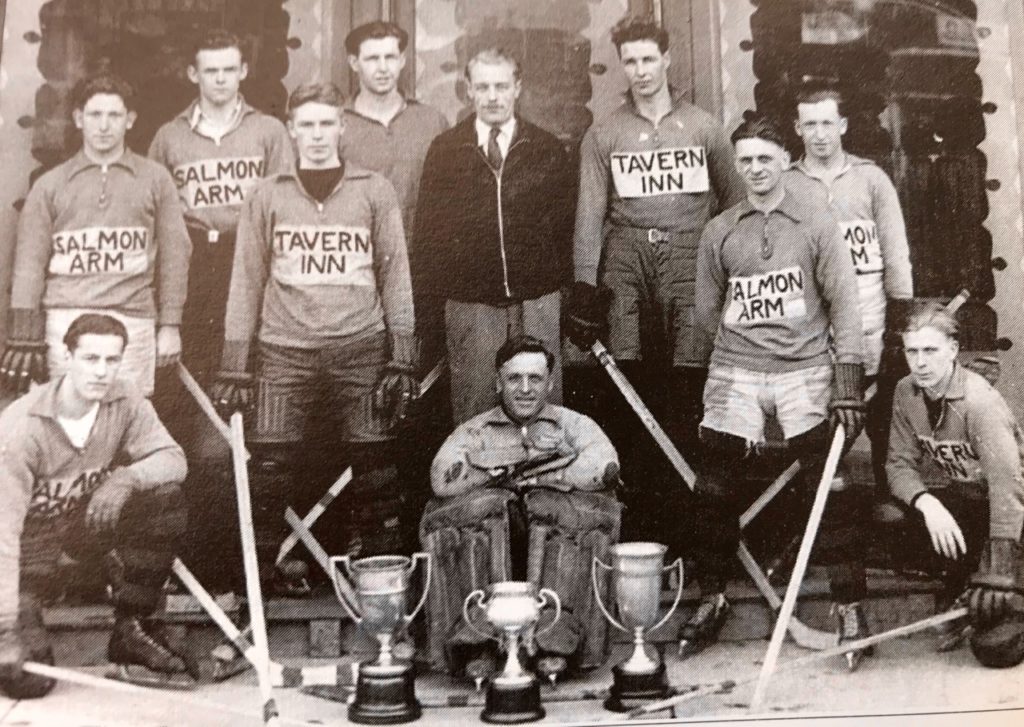 Tavern Inn All-Stars, sponsored by restaurant owner Tom Middleton, were a local sports fixture in pre-WWII days, seen here with a season’s worth of awards. From “Fleeting Images,” Courtesy of the Salmon Arm Museum at R.J. Haney Heritage Village

Just as today, there were youth teams, women’s teams and old-timer teams. From 1926 until 1933, the coveted prize was the Mainline Hockey League championship award, the Bruhn Cup, donated by local MLA R.W. Bruhn. Teams from Salmon Arm, Enderby, Vernon, Lumby and Revelstoke competed for the cup. Once lost, it was found in the White Lake dump in 1971, refurnished and now displayed by the Minor Hockey Association.

Efforts to build a new arena for Salmon Arm began after the end of the Second World War as a memorial to the war effort. The unique plan they developed resulted in the building of the community owned Salmar Theatre, with the profits going to help pay for the costs of the new arena. 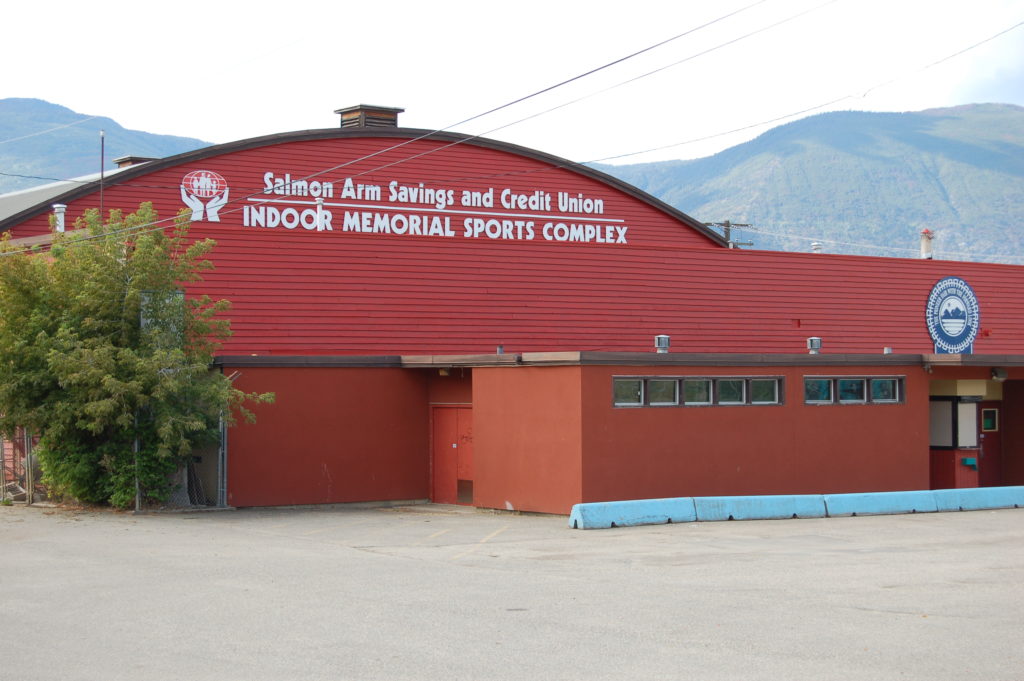 When the new arena was built in 2001, the old arena was converted to a indoor soccer field

Finally, with support from the city, the Memorial Arena was constructed in 1958. However, it was not until 1961 that the ice plant was installed, which is the same year that the Salmon Arm Minor Hockey Association was formed. 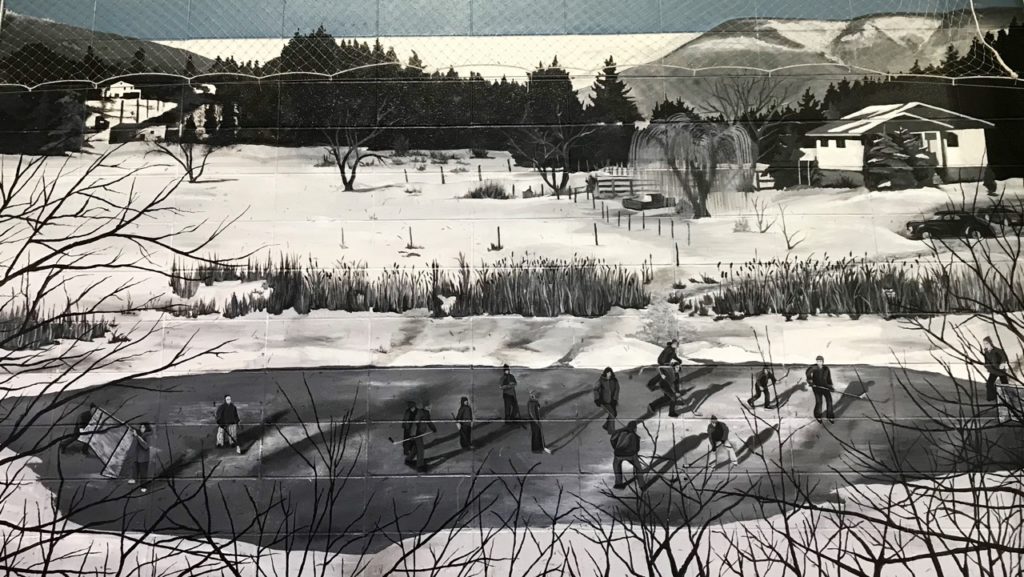 A painting of the original Hucul Pond on the wall of the Hucul Pond ice sheet in the Shaw Arena.

Hockey old-timer and former co-owner of the local hockey school, Gord Mackintosh fondly remembers his early days playing on Lester’s pond in South Canoe, when the games had players of all ages. His first coach was Charlie Williams, who also organized the Native Hockey Tournaments in the 1960s. Equipment was rarely purchased new in those days, as most kids were thrilled to find a used pair of skates under the Christmas tree.

One of Gord’s favourite events was the Saturday night Jamborees, when all the teams each played short five to ten minute long games and at one he scored a goal at the young age of seven. Only a few parents attended the games then and the young players would pack into a few vehicles to travel to tournaments. Once the arena was built, it was the kids who scraped the ice, as there were no Zamboni machines in those days.

From an article written by Roland Jamieson for the Salmon Arm Museum: 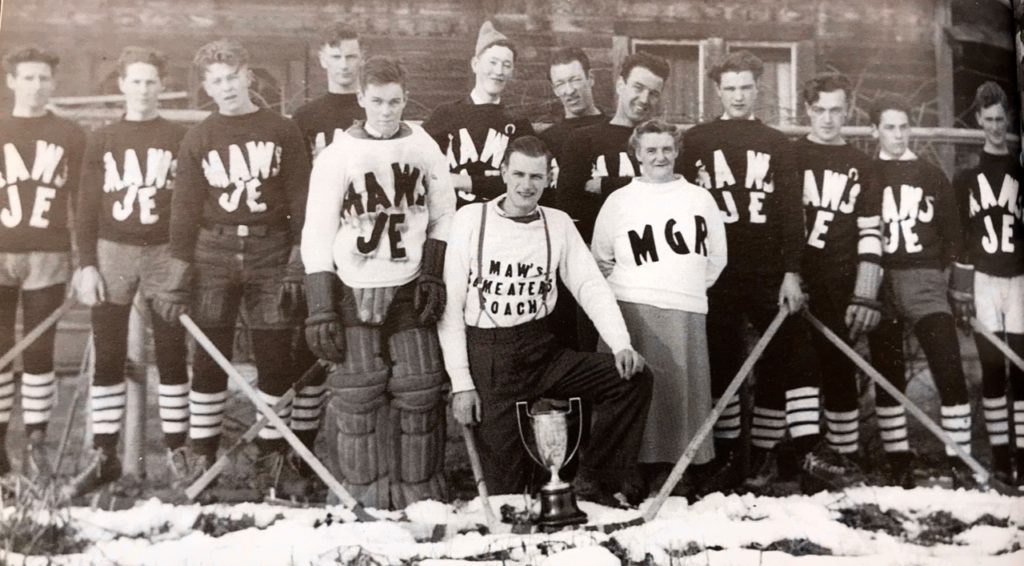 Salmon arm’s original arena was built by sawmill owners, Braden and Johnson, at a cost of $2,500 for the Fall Fair Association. When the Fall Fair Association was temporarily shut down in the 1930s, the building was turned over to the District Council. The city declared the building unsafe and a contractor was hired to repair it and fully convert it to house a hockey rink and curling rink. There were skating carnivals and skaters enjoyed live music played over a sound system. I the summer, the building was used for lacrosse.

There were several hockey leagues in those days, including senior, intermediate and high school, and women’s teams. The bush league was where most players found a home, and including teams like the Technocrats, the Broadview Apple Cider Warriors, Sam Miller’s Millionaires, Gleneden’s Flying Finns, the Secwepemc “Red Men,” the Tavern Inn All-Stars and the most memorable Maw’s Jam Eaters. These teams competed for the Barlow Cup, donated by Claude Barlow, local sportsman and horticulturalist.

the 1939-40 season pitted the Jam Eaters against the Mt. Ida Pack Rats, the Salmon Arm West Valley Vultures, the Silver Creek Cougars and the Millionaires renamed the Pole Cats. Maw McEwen and her daughter sewed the uniforms for the Jam Eaters and used a knitting machine for the wool socks. The final game was played on a warm afternoon in February, when the west end of the rink was covered in water. The Jam Eaters chose a strategy to get the opposing team, the Pole Cats, as wet as possible, because they wore more padding. By the end of the game, both teams were soaked, but the Jam Eaters won by a score of 3 to 1.