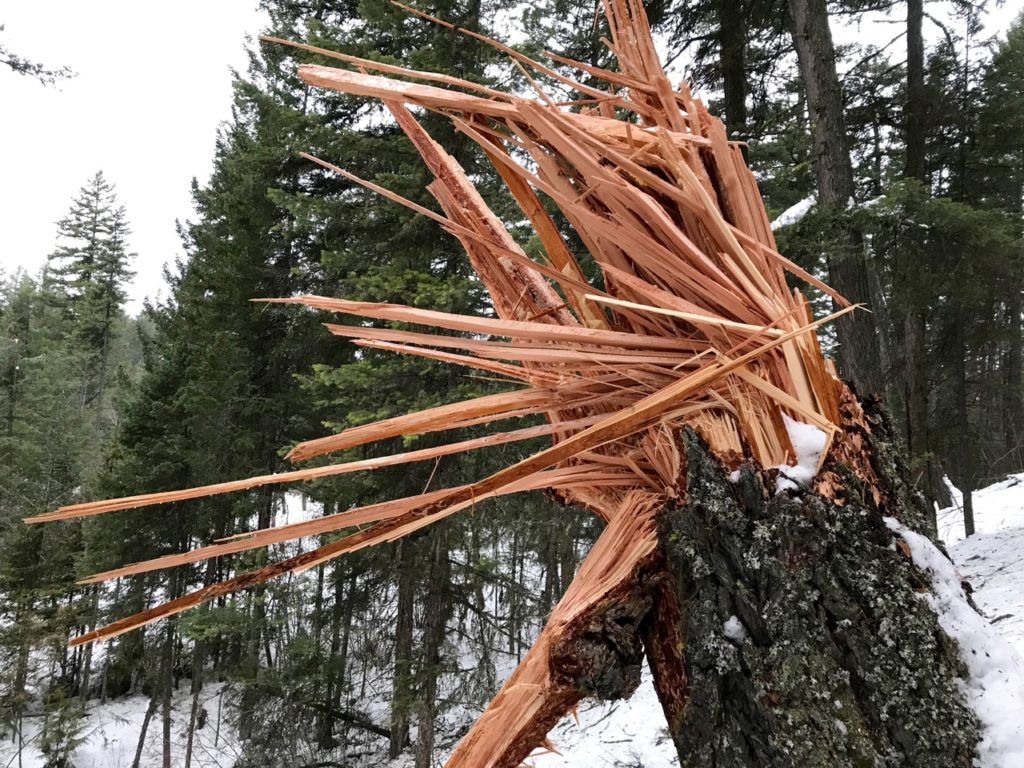 Even large trees snapped like toothpicks during the New Year’s Eve snowstorm, photo by Jim Cooperman

The arrival of the new decade that finally has a familiar ring provides an opportunity to reflect on the previous one, make predictions about the upcoming one, as well as compare it to its namesake, the Roaring Twenties. No doubt it will be as roaring as the last one, but more likely the roar will not be coming from the wild dance parties, instead it will emanate from wildfires, intense storms, rising social upheavals and yet more wars.

With so many countries now run by leaders seemingly populist, but increasingly authoritarian and in cahoots with the greedy elites; it is likely at some point citizens will rebel when they see themselves increasingly marginalized. As climate change impacts more people, it is inevitable that the public opinion tide will turn with Greta Thunberg’s movement gaining support and influence. 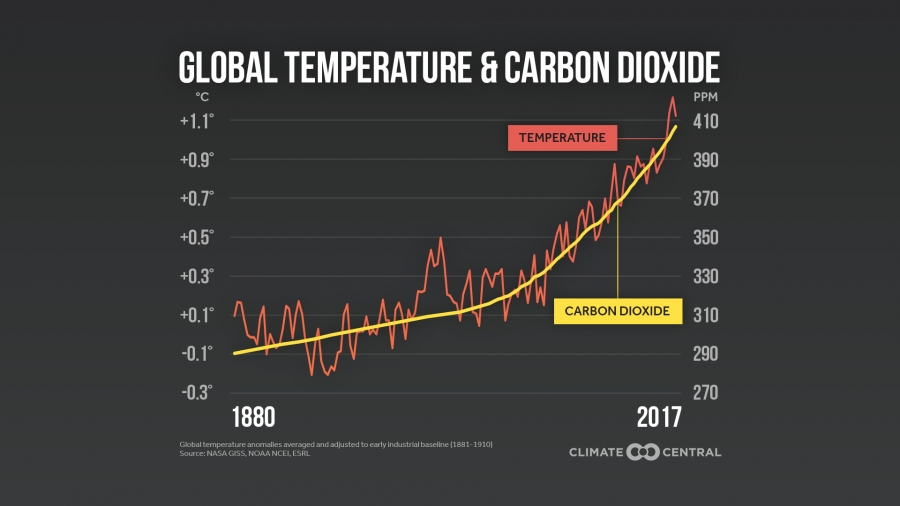 What is too often missing in any article about climate change is the true nature of the problem that all predictions call for exponential growth. We are witnessing the exponential growth of most impacts already, including glacier loss, wildfires, ocean acidification, and intense, unpredictable storms. There is little doubt that the upcoming decade will be much warmer, which could provoke a tipping point in public opinion towards greater uncertainty about the future and greater distrust of status quo governments. 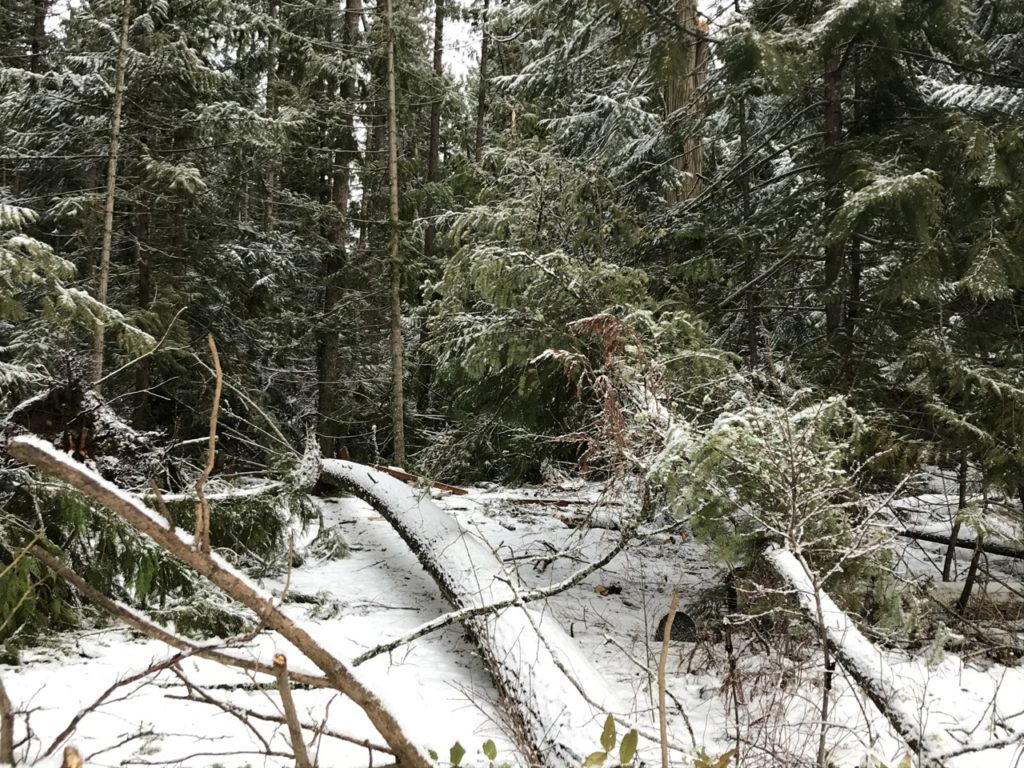 These trees that fell on the trail to the viewing platform at Tsútswecw Park also destroyed a bench, photo by Jim Cooperman

It has also been an ominous start to the new decade here in the Shuswap, as an unprecedented storm that combined massive amounts of heavy, wet snow with strong winds resulted in thousands of trees either snapped in half or fully down. As a result, most homes experienced a power outage, while some customers were without power for up to four days. 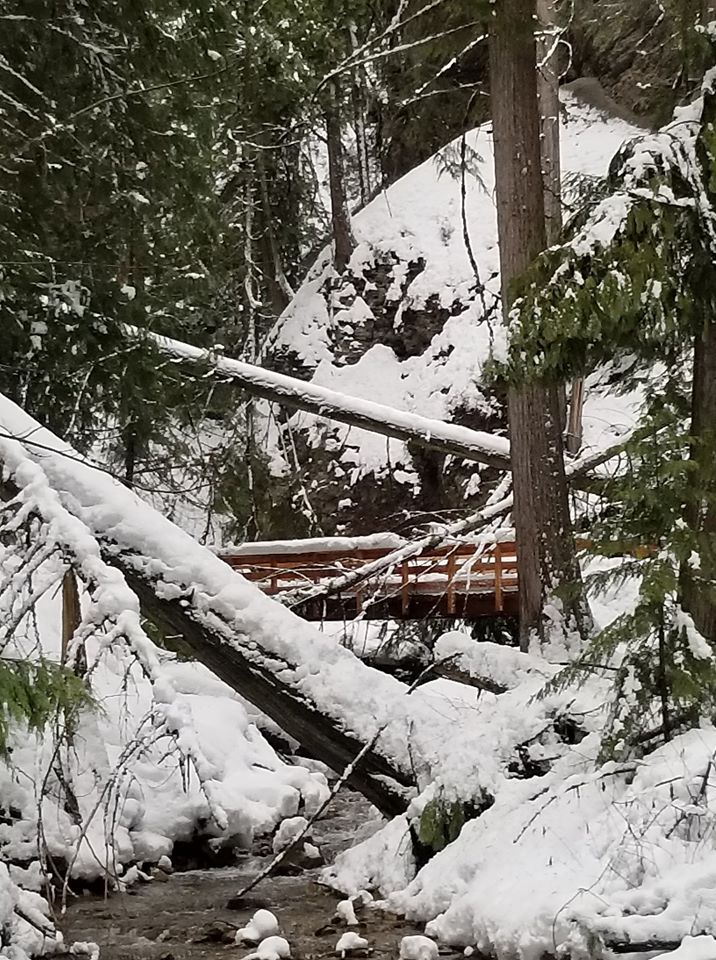 The Margaret Falls Trail is closed again because of downed trees in the park. photo by Barbara Fairclough

The impacts from the new year’s “snowmegeddon” will be felt far into the year, as likely every hiking and cross-country skiing trail is crisscrossed with upwards of hundreds of trees. Especially hard hit is the recently restored Margaret Falls trail where fallen trees have severely damaged the new bridges and walkways. The downed trees can also attract fir bark beetles, whose populations can then expand into the standing forests. 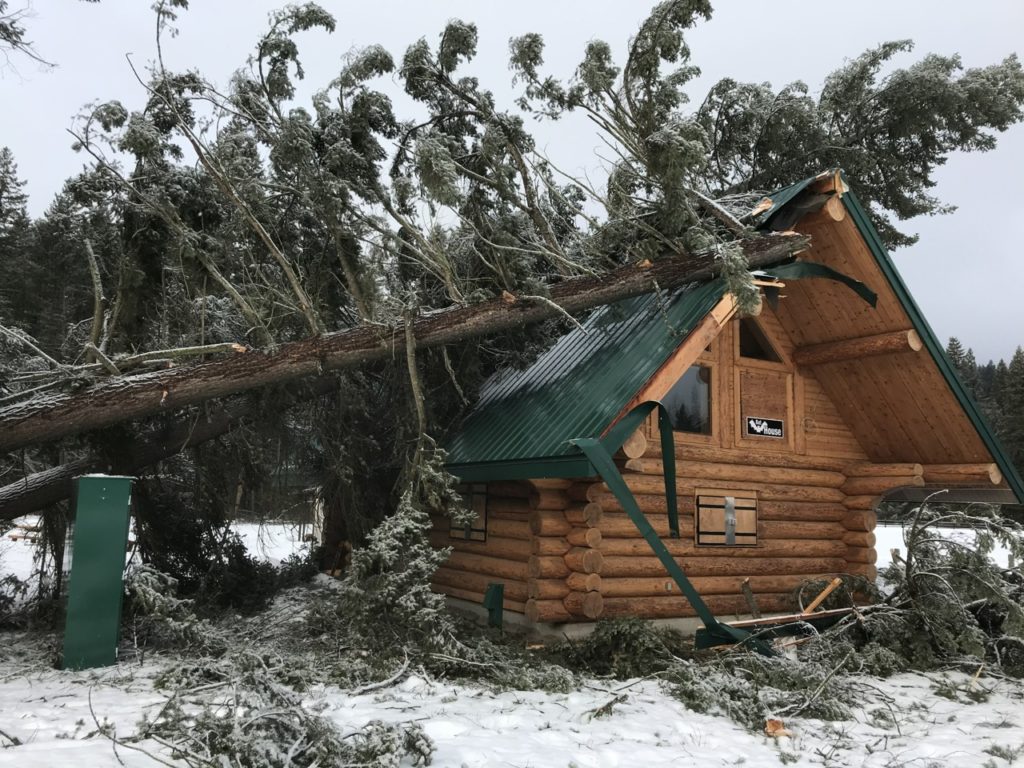 Tsútswecw Park will be closed until all the tree are removed, including these that fell on the Interpretive Cabin. photo by Jim Cooperman

With record amounts of snow and more on the way, the possibility of flooding in the spring increases. As well, if warm weather arrives early and is accompanied by heavy rains, there will be more slides and other erosion events as we have already seen too often in the Shuswap. 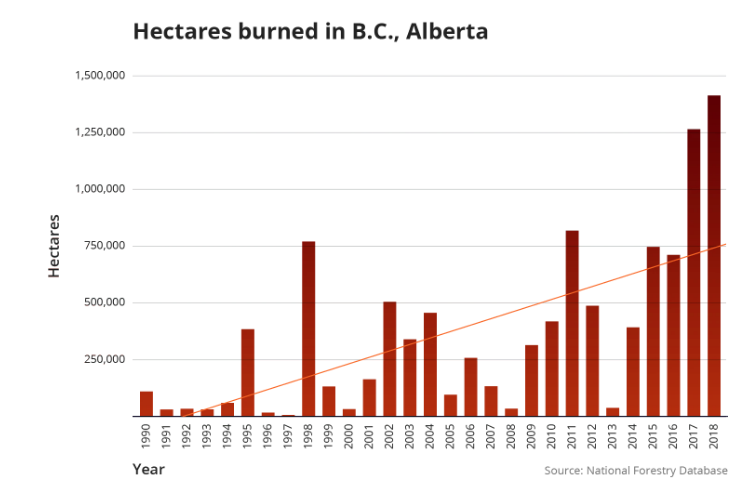 With forest fires currently ravaging Australia, there is a growing concern that the entire continent could become uninhabitable within decades. Last year we had a reprieve here in British Columbia, but the trend is definitely towards more droughts and more fires. It is only a matter of time, before wildfires threaten Shuswap residents again and yet government action on reducing fuel loads remains minimal.

Even though there will be greater uncertainty about the climate and the environment, trends from the previous decade indicate the Shuswap is poised for much more growth in the new decade. Salmon Arm is in the midst of a population expansion, as more people are choosing to move here, including many young families. As the population increases, so too will the local economy improve.

At best, we can begin the decade with our fingers crossed with the hope that one of the best places in the world to live will continue to remain green and viable. Thankfully, in addition to being fortunate to live in a magnificent environment, we also have incredible organizations with countless numbers of dedicated and generous volunteers; all adding to the big rewards we enjoy living here in paradise.

We have passed the point of no return when it comes to climate change. The tipping points are kicking in, as the methane, which is 70 times stronger than CO2 in warming the planet, is escaping from the warming arctic (and all the fracking sites). Forest fires are releasing more CO2 and are covering glaciers with ash, causing them to melt faster. When the sea ice is gone, the oceans warm faster and the ice melts faster.

Despite all the global efforts and climate change confabs, the levels of CO2 continue to increase. There is a 40 year time lag between the release of CO2 and the resulting warming, due to the delay in the ocean heating. Thus, even if we stopped emitting CO2 tomorrow, the temperatures would continue to rise for at least another 40 years.

While it is critical the citizens demand action to mitigate climate change, it is obvious that we need to address the need for adaptation. Wildfire is the biggest threat in B.C., and the government needs to invest more money into removing forest fuel around communities. More effort should be directed to food security, because Canada cannot depend on imported food in the future because climate change will likely impact southern food growing regions.

The fires in Australia should be a wake-up call and prompt immediate action to reduce emissions and prepare for an uncertain future. By the end of this decade, I predict the major concern for most people on the planet will be survival.

B.C. could be helping mitigate climate change through forest growth, however the reverse is happening as this graph illustrates: