Big ideas for a cultural centre 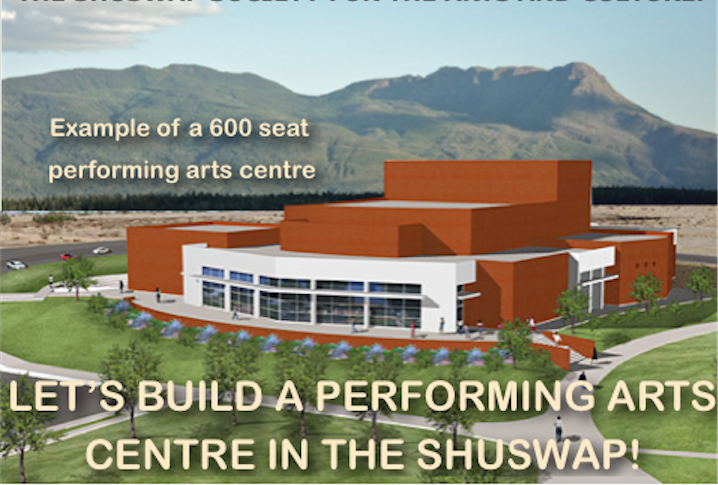 Given that many communities of similar size to Salmon Arm or even much smaller have successful performing arts centres, then our community should also be able to develop a similar facility. The first step is to create a vision, one that both fits the community’s current needs and its potential future needs. It would be more than providing a venue to significantly increase entertainment options, as the cultural centre should also foster the arts by providing a facility that could help develop future artists and meet the needs of a growing population.

The magnificent geography that the Shuswap is known for already helps inspire a rich arts and culture scene that includes a world class music festival, weekly outdoor summer events, a successful amateur theatre group, dance schools, a student music festival, art galleries, a jazz club, choirs, bands and an orchestra. However, all these groups operate on their own, with little coordination or cooperation between them.

In order to develop a comprehensive plan for a cultural centre, the existing groups will need to collaborate on a common vision that incorporates all of their needs in addition to what would be required to significantly enhance the cultural scene. We need to imagine a future that not only includes fabulous touring performers, but also one that includes local dancers working with local musicians and artists to produce original shows that attracts large audiences.

In addition to a 400 to 600-seat theatre space, a Shuswap cultural centre built to foster the arts should include a 150-seat multi-purpose hall that could be used for smaller performances, talks and meetings, dance classes, dances and rehearsals. Rather than fill the lobby space with giant windows as is often done, it should have ample wall space for art and heritage displays to be exhibited and it could double as a cafe and a venue for smaller shows. The building should also include rehearsal studios, a kitchen, a green room, and a sound studio for recording.

Ideally, the venue would have a close connection to the Secwepemc community that would result in incorporating Indigenous design and art to the structure, as well as providing a space for Indigenous storytelling, theatre, music and dance.

Building a multi-million dollar cultural centre would be no easy task, as the option of partnering with the school district as is the case in many communities is not feasible, given the high school already has a small theatre space. Corporate sponsorship would be key to raising the funds needed, as would support from all levels of government.

There are many potential benefits to the community from a well-designed, multi-functional cultural centre, both artistic and economic. Cultural events bring people into the community and more business to stores and restaurants. Adding a significant amenity to the community would also help attract more residents. Most importantly, a cultural centre could help create more art and improve our cultural identity. Just as sports and recreation facilities are key to a healthier lifestyle, culture is beneficial for our quality of life, our social health, as well as our minds and souls.

If we are going to imagine a future that includes a cultural centre where all the existing arts and culture groups are partnered together, we might as well utilize the community slogan and think big by combining the goal with another great idea. One day, Salmon Arm could be home to a degree granting, post-secondary campus that includes a school for the arts. The cultural centre could then also serve as a venue for the students to perform classics as well as original works, thus helping to make the Shuswap a well-known, creative destination.

There is an organization that has been actively promoting the creation of a performing arts centre in Salmon Arm since it was organized as a non-profit society in 2014. The Shuswap Society for the Arts and Culture, which began as a building committee for Shuswap Theatre, has been doing intensive research and has determined that the basic operational cost of the new facility could be covered through tenant rental and the stage derived income could then be used to pay for staff and improvements. 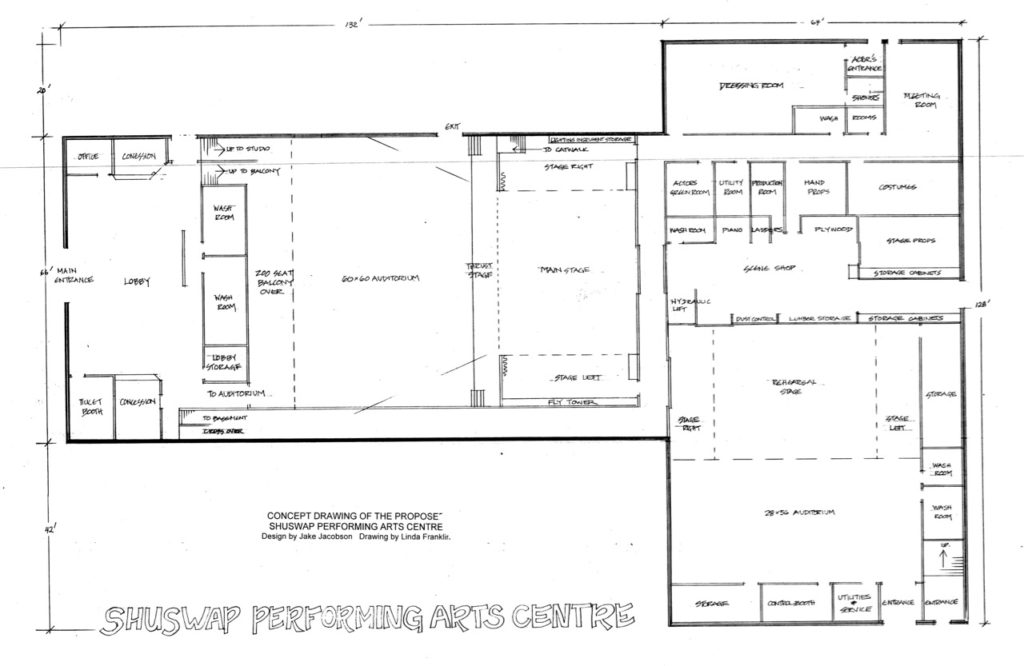 Proposed plans for the arts centre

With news that the City of Salmon Arm is interested in using a portion of the former JL Jackson school site for the arts centre, it has prepared proposed plans. The society is also providing input to the city commissioned Cultural Master Plan, including an assessment of all the arts facilities in the community. Potential features of the proposed building include a dance studio, movie screen, activity rooms, geothermal heating and cooling, green technology, rehearsal rooms and a permanent home for arts, literary, and cultural groups.