More places to explore in the Shuswap

Home » More places to explore in the Shuswap 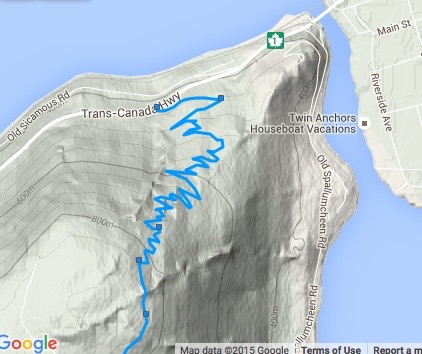 Pushing my bike up this trail was tedious, while the return trip down was exciting

Over the last few weeks, I have been visiting various locations in order to capture more images needed for my book, Everything Shuswap, which is now in production. Trips to the Larch Hills twice, Mt. Ida, and Scotch Creek have reinforced my appreciation for the amazing diversity of ecosystems, the magnificent vistas and the excellent trail networks we have in the Shuswap. For those who live in or near Salmon Arm, the nearby Larch Hills provide a wealth of opportunities.

An incredible view!
In early September, my goal was to get a better image of Mara Lake from the Hyde Mountain lookout trail. Following the instructions in the Shuswap Trails guidebook, I pushed and rode my bike up the steep trail from near Sicamous to the top of the Larch Hills and then cycled the logging roads to where the steep uphill trail begins. Upon reaching the top of the cliffs, I was in awe as this is one of the Shuswap’s most spectacular views. Despite the distant haze that befuddles every photographer I was able to capture the scene, and the resulting image may help with the promotion of the proposed rail-to-trail project. The return ride down the steep trail with its 33 switchbacks tested my abilities, but it was fun! 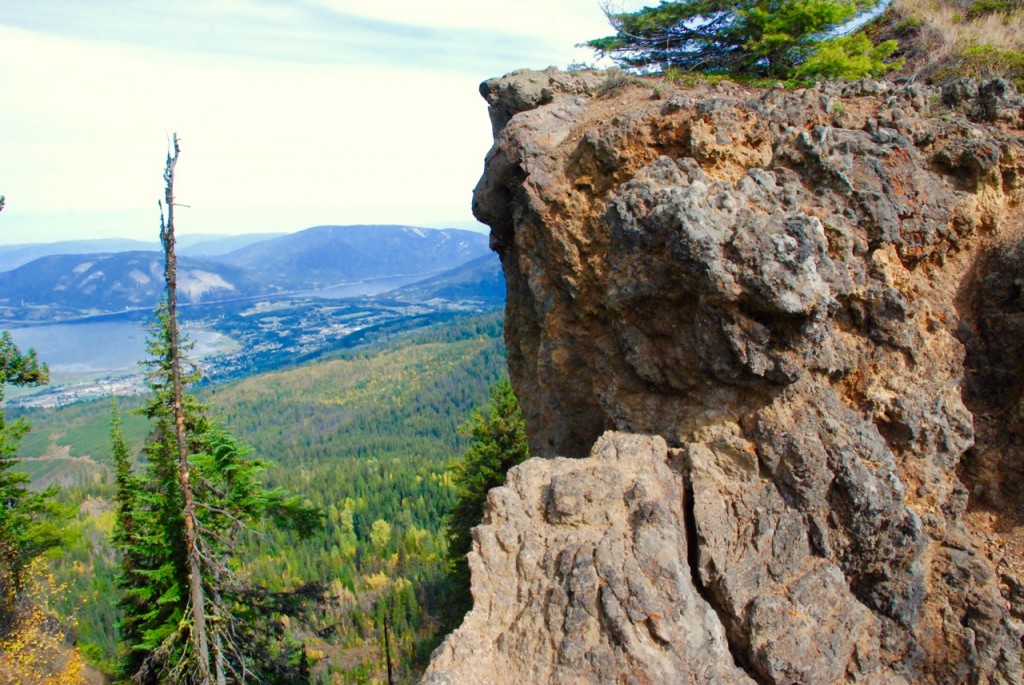 The volcanic rock atop Mt. Ida

For the chapter on geology, I needed a photo of the rare to the Shuswap volcanic rock atop Mt. Ida. It had been years since we were there last and we had always hiked up the trail from the north above the cemetery. We were surprised to find a small parking lot, outhouse and signs at the trailhead that date back to the 1970s, when Shuswap Outdoors installed these as part of what was likely one of the first trail systems for the region. 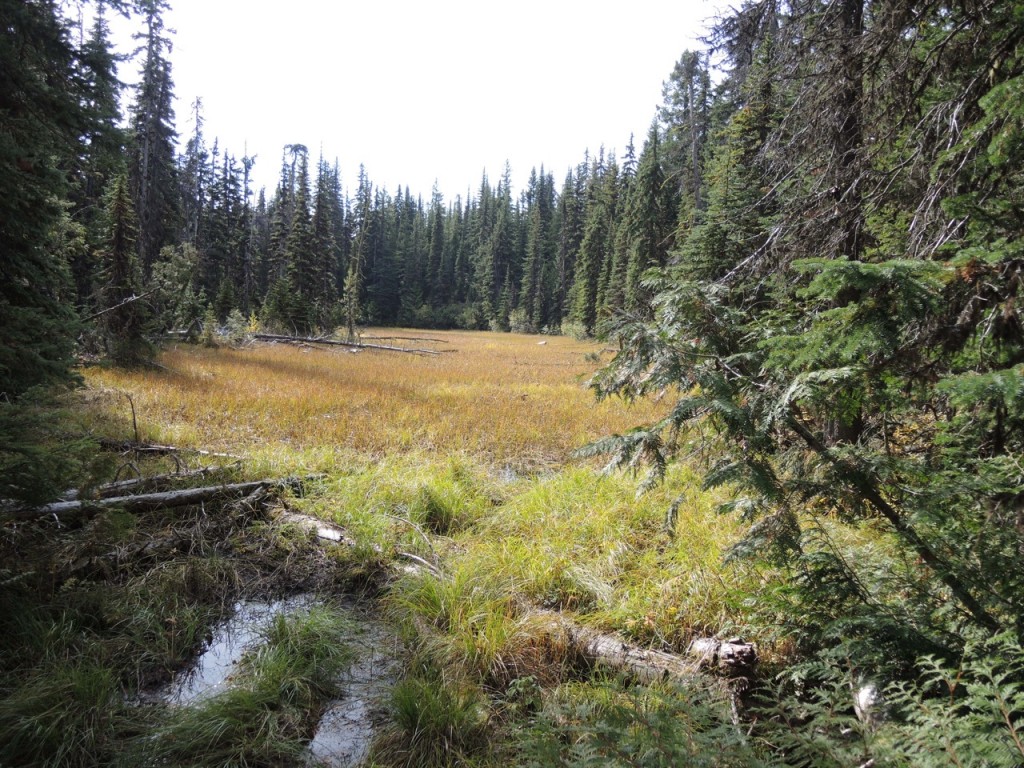 Fortunately, the idiot ATVer could not get any farther into this rare hanging bog

It was a short hike to the west peak viewpoints where we were thankful to find trees unscathed by the massive 1998 forest fire. The rare hanging bog is still there, but unfortunately there is an ATV track scarring the entrance from another irresponsible rider. The steep and dangerous terrain atop the mountain makes it impossible to reach the last peak to the west, which can be accessed via a route up from Silver Creek. There is a great loop trail back to the parking lot, from which I was able to get an interesting photo of layers of ancient sedimentary rock with the volcanic rock visible in the background. 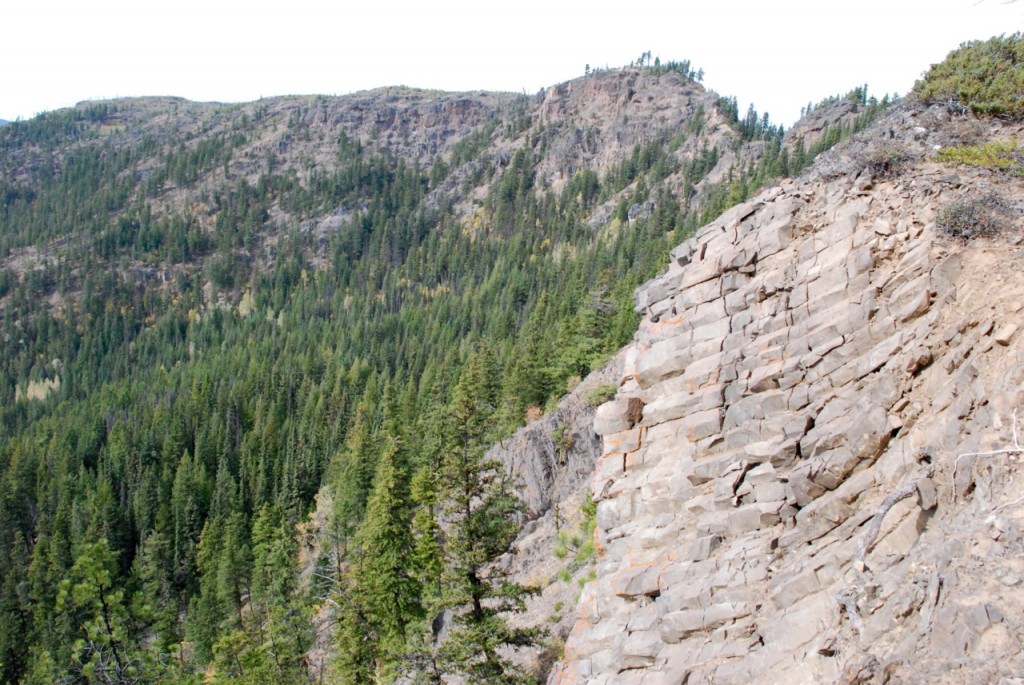 Sedimentary rock can be found adjacent to the volcanic rock

Many years ago, one of our favourite spots to fish for trout were the pools in Scotch Creek below the waterfall. It was a pleasure to return and re-discover this steep canyon where the rock has been polished smooth from the flowing water. 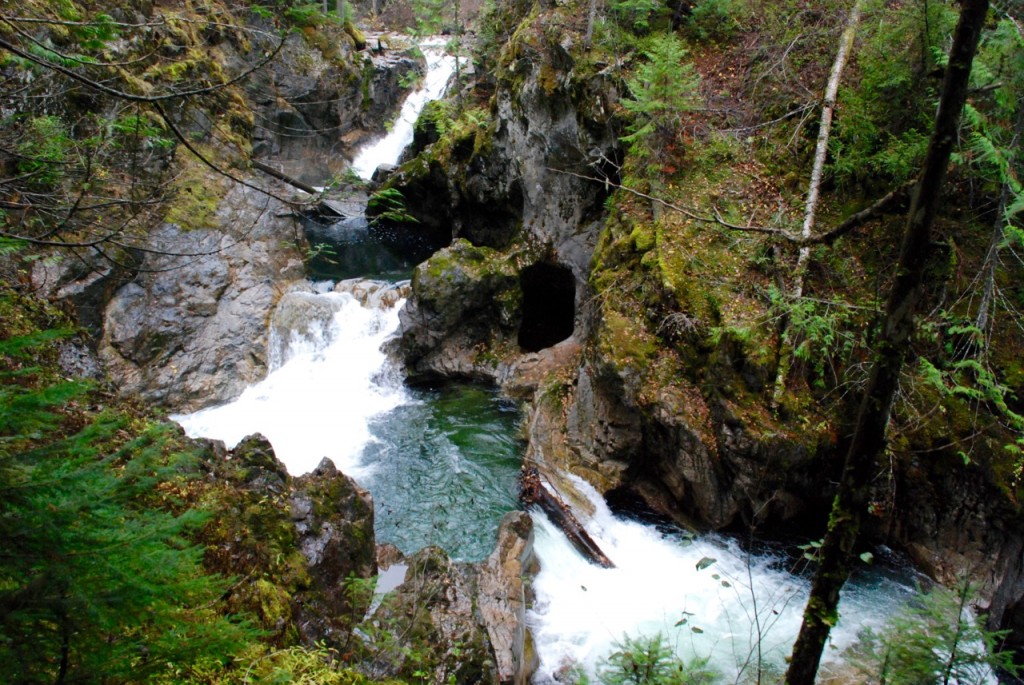 Scotch Creek Falls at the end of a steep canyon

The hike into the falls was just as difficult as I remembered, but after inching my way along the steep moss covered hillside clinging to roots and branches I managed to reach the falls and get the photos needed. There is a well-used forest recreation camping area nearby that is without any infrastructure. Perhaps one day, proper trails could be built here so more people could experience the beauty of this canyon, which also has an interesting history dating back to the 1880s Scotch Creek gold rush era. 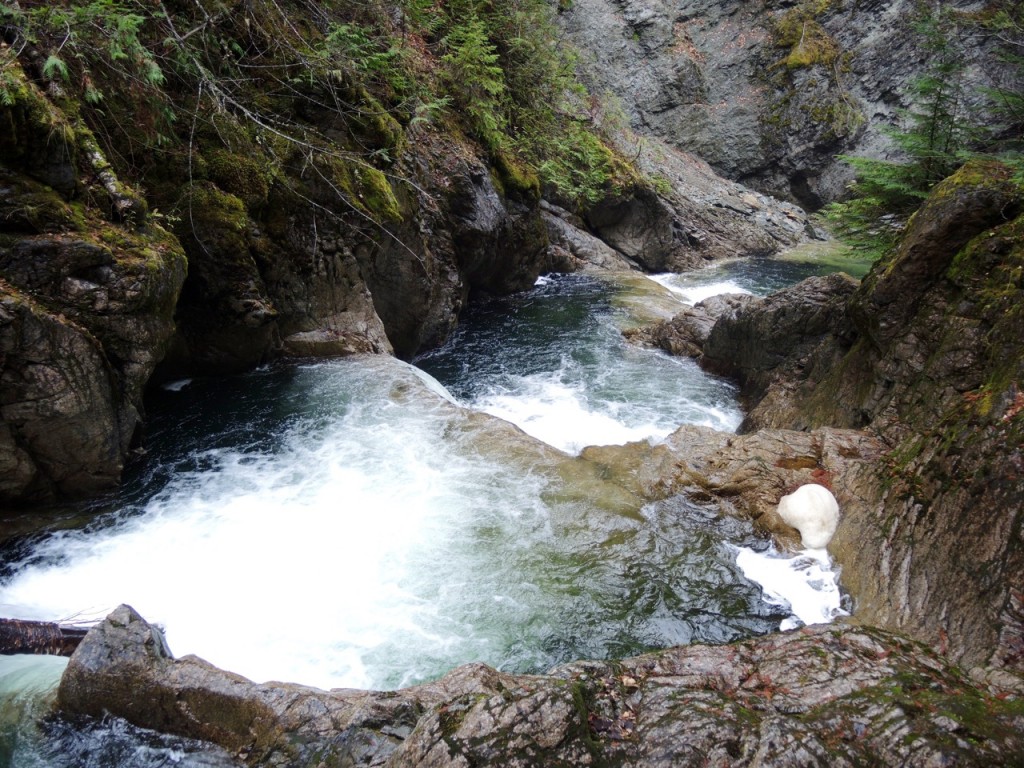 The view below the falls of the pools in the canyon

One might think that photos would be available of the autumn display of golden larch trees in the Larch Hills. But after making a number of attempts to find some good images, I headed up the roads we are more familiar with skiing on in the winter to look for larch. After learning that the best views would be near the Larch Lake loop road, I instead found new large clearcuts and what looks to be new skiing trails to explore this winter. 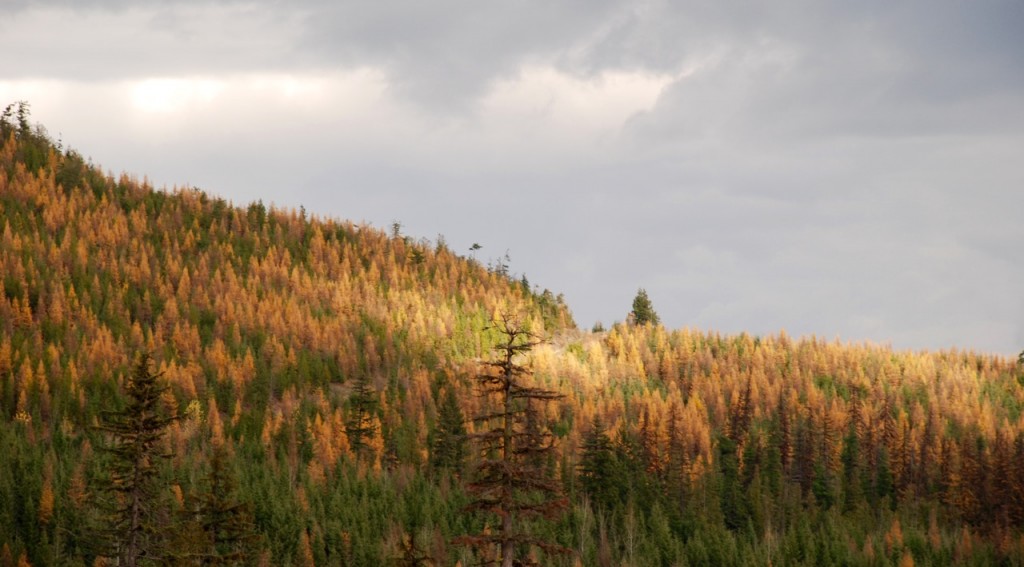 Most of the mature larch has likely been logged, but fortunately in the distance there were plantations filled with golden young larch that gleamed in a brief ray of sunshine. And along the logging road to Rosemund Lake I found both young and mature larch that stood out against a backdrop of cedar and fir. This is one of the reasons the Larch Hills are so special, because one can find just about every species of B.C. trees here, including groves of ancient old growth forest. 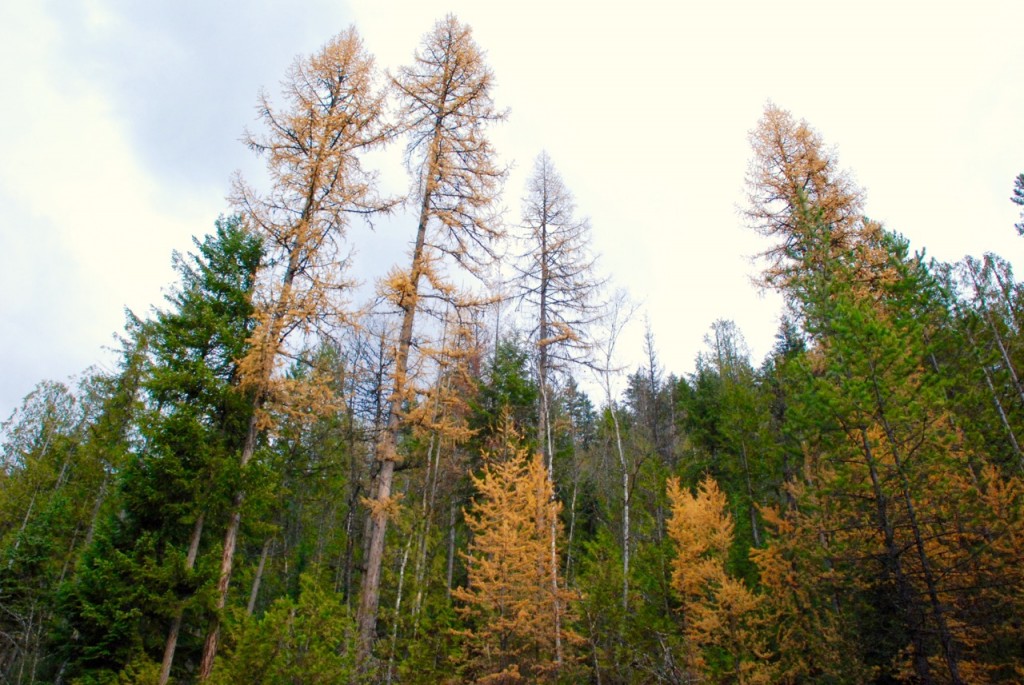 So many tree species, including these larch can be found in these hills

Most of these cedar, hemlock and giant white pines are protected in a 1,196-hectare old growth management area, which also protects the drinking watershed for Salmon Arm. As I was taking photos, a group of trail runners effortlessly whizzed by in one of best places to run or hike near Salmon Arm. 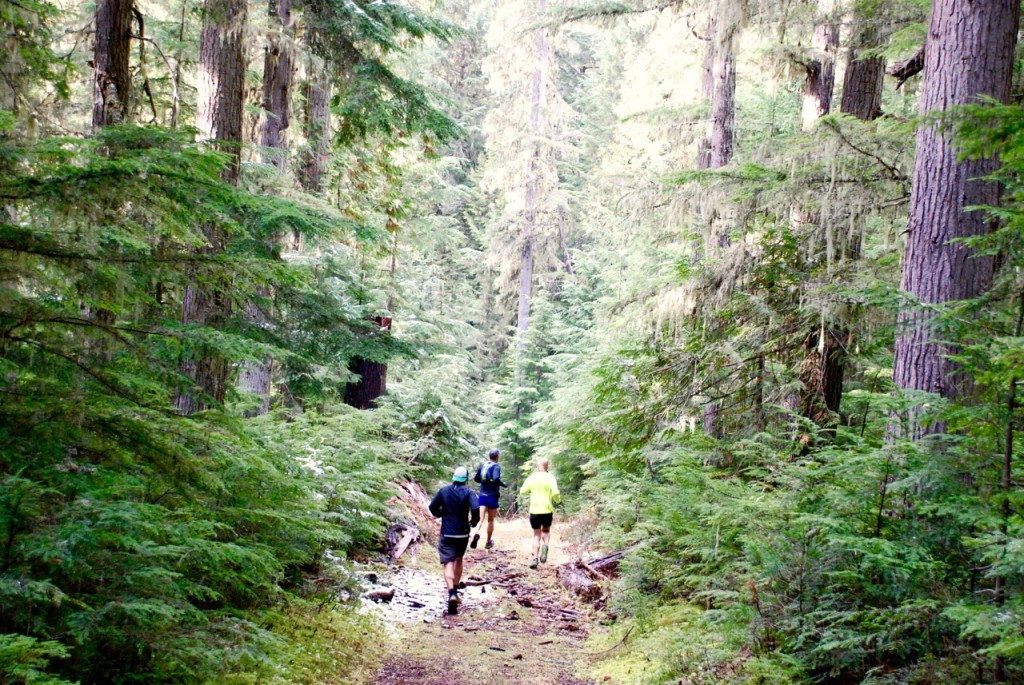 These brief expeditions to some of the Shuswap’s special places points out the many opportunities there are to get out and appreciate what our region has to offer. As well, many of these areas offer opportunities for improvement. The trail to the Mara Lake lookout could be improved and maps could be updated so hikers not willing to head up the steep uphill trail from Sicamous could drive to a parking lot near the last part of the trail to the lookout.

The Mt. Ida trails could be improved with interpretive signage that provides some background on its interesting geological history. The Scotch Creek canyon and waterfall needs a decent trail and the nearby camping area could use some infrastructure like a pit toilet and organized camping areas with picnic tables and fire pits.

The old growth in Larch Hills would also benefit from signage and more promotion for tourism. Consider how the redwoods in California are visited by many thousands of people every year. Given that this old growth is so close to Salmon Arm, this forest could also attract visitors. Interpretive signage would also help. 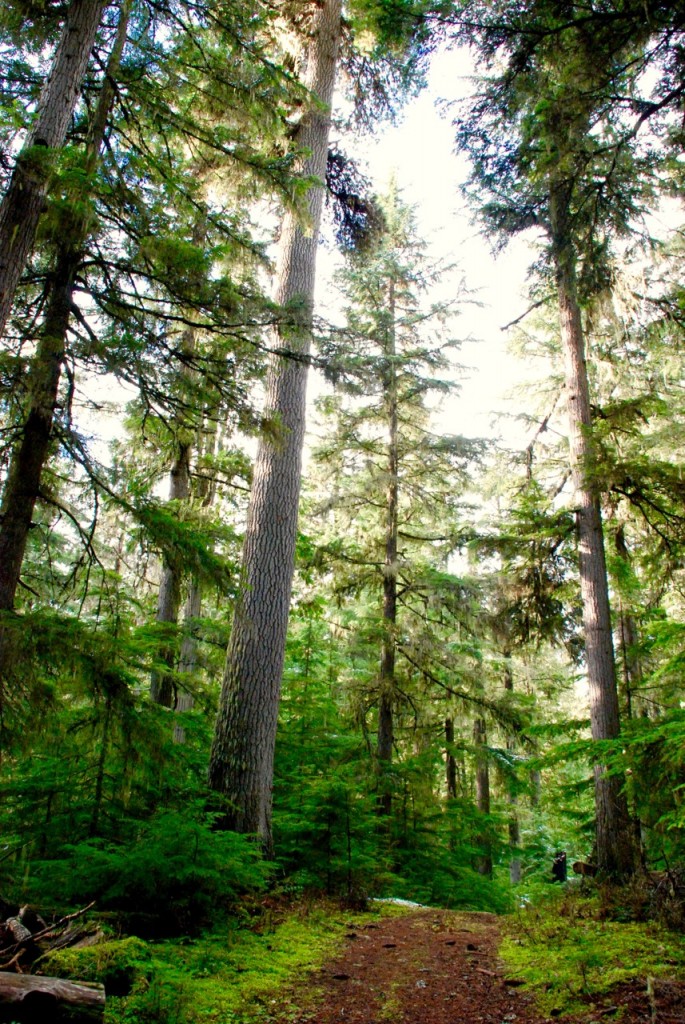