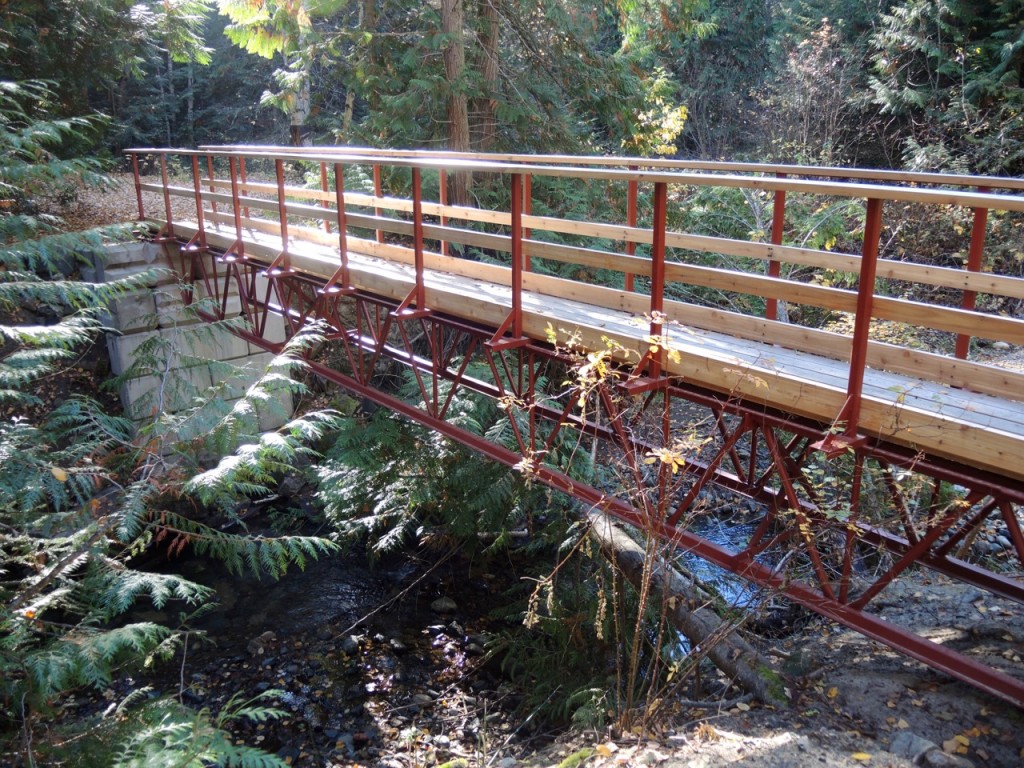 Many hikers were disappointed when the Bear Creek Flume Trail in Roderick Haig-Brown Park was closed last year due to a washout and decayed bridges that were no longer safe to cross. Fortunately, BC Parks was able to fund the reconstruction of the trail during the last few months. Four new steel bridges, new stairs, and cedar handrails have been installed by a contractor, which has vastly improved the route. The trail remains officially closed however, because the last bridge has yet to be replaced. (Latest news – BC Parks is planning to open the trail soon up to the last bridge) 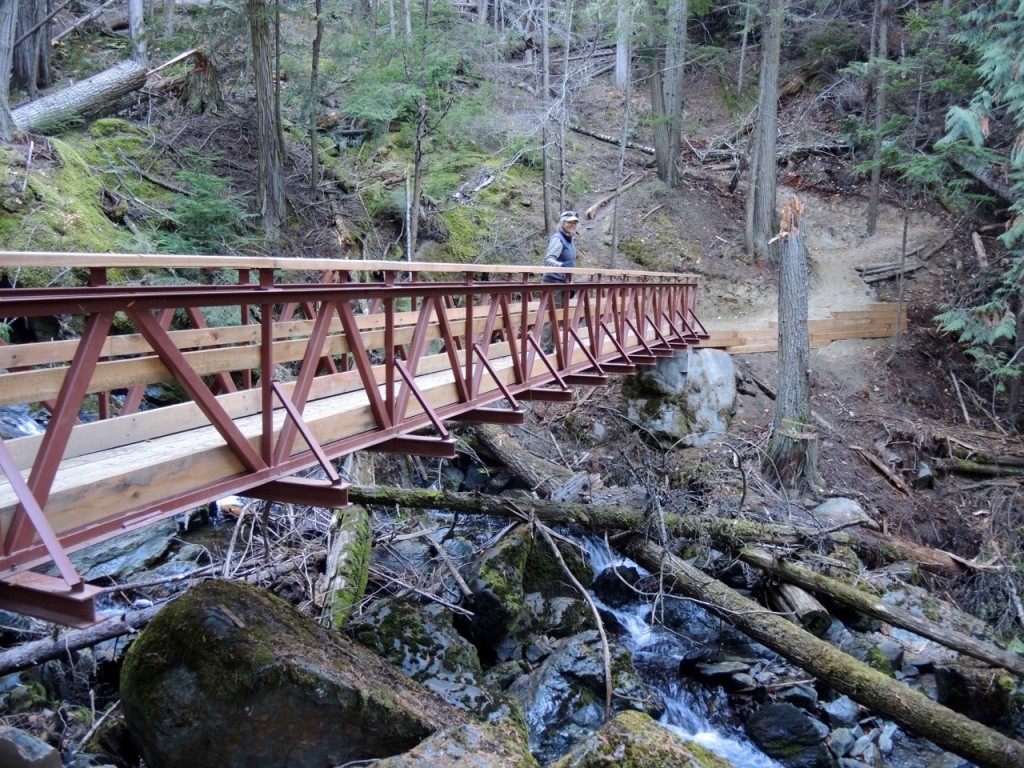 Installing the new bridges must have been quite difficult

The popular trail follows the creek with multiple crossings and then loops back along the route of the log flume. Remnants of the timbers used for the flume can still be found. In some hilly areas, the soil had been excavated to ensure there was a consistent grade for the flume. Either these large ditches had been dug with some type of steam shovel or by teams of men with shovels. It is a wonderful loop trail, with scenic views of the creek, old growth forest and waterfalls. 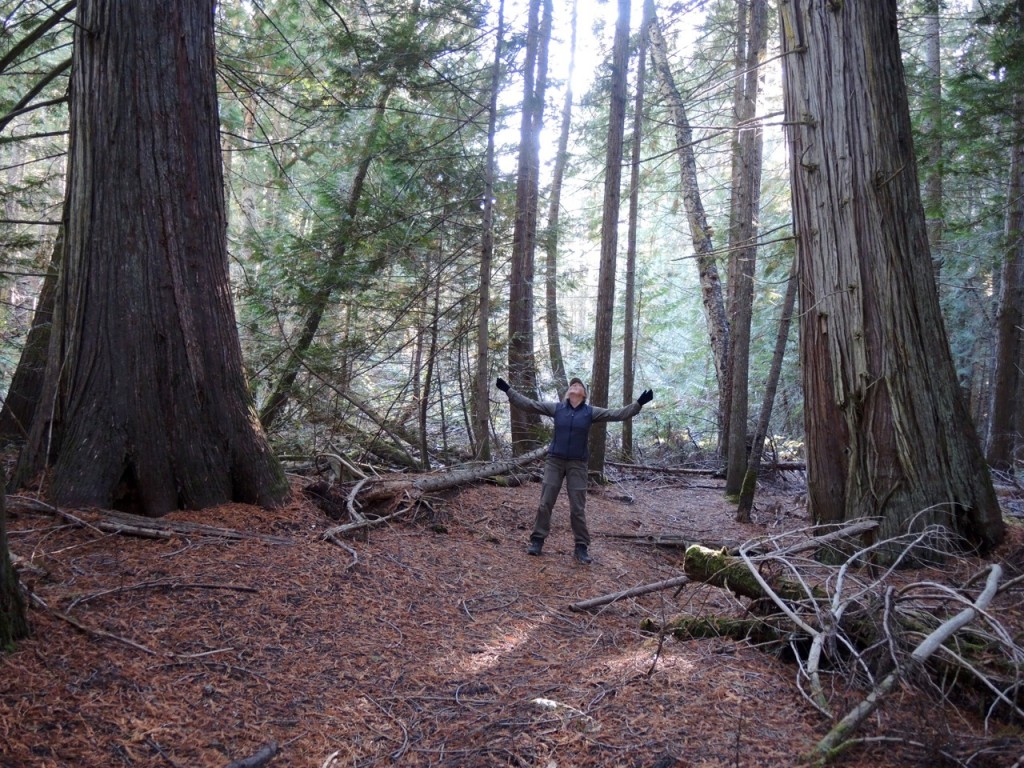 There are some massive cedars and firs along the trail

A federal employment program crew first constructed the trail along with the bridges, steps and guardrails in 1987, when the area was a forest service recreation area. It was not until the Kamloops land use plan was completed in 1996, that the 90 hectares surrounding the Bear Creek was added to Roderick Haig-Brown Park. 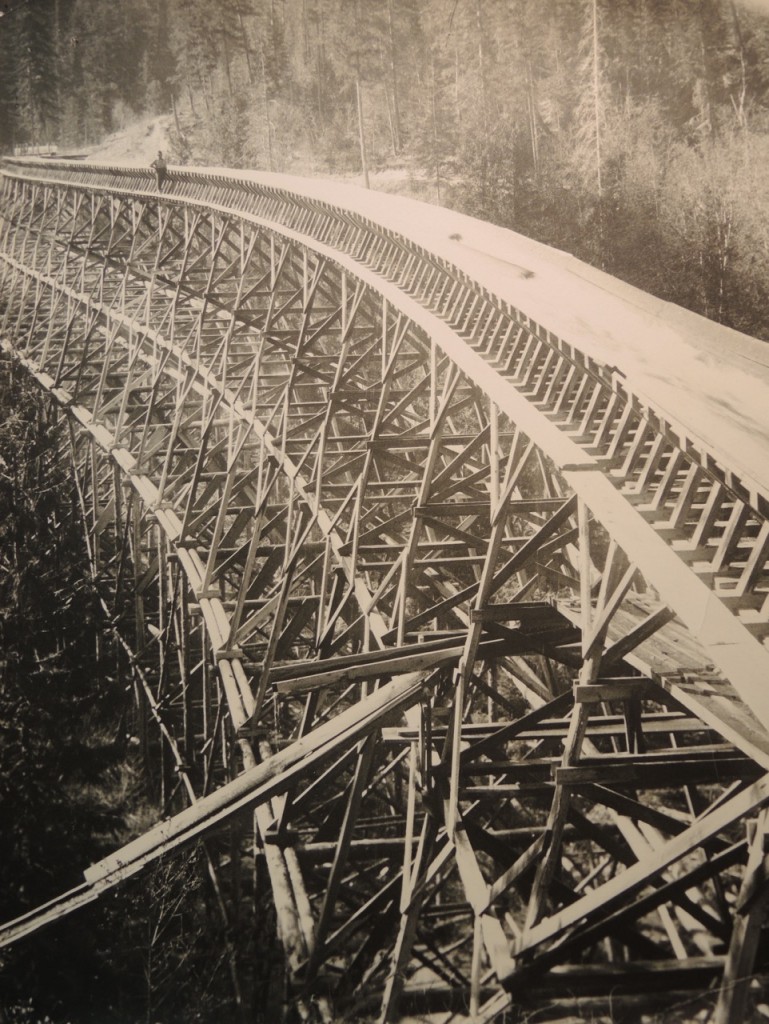 1912 circa photo by Walter Montgomery

The story of the flume begins in 1908, when the Adams River Lumber Company established its mill and the town of Chase. It was a massive sawmill, the third largest in the province and during its 20 years of operation it removed one billion board feet of the best timber from the Adams River watershed. Two loggers standing on springboards used 7 to 10 foot long crosscut saws to fell the trees. 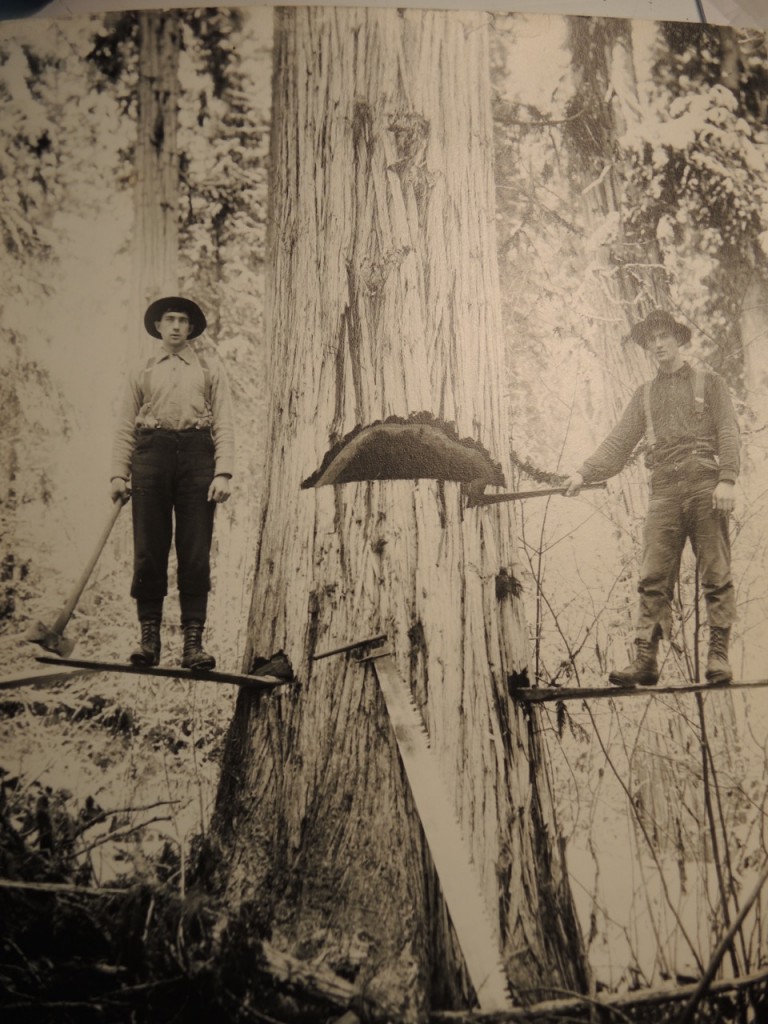 During the first three years of operation, the logging concentrated on the timber within a half-mile from the shoreline of the lake and river. A splash dam, which decimated the Upper Adams River salmon run, was built on the lower river near the lake to control the flow of water. It allowed the logs to be sent down the river to the lake, where they boomed and then towed to the mill. 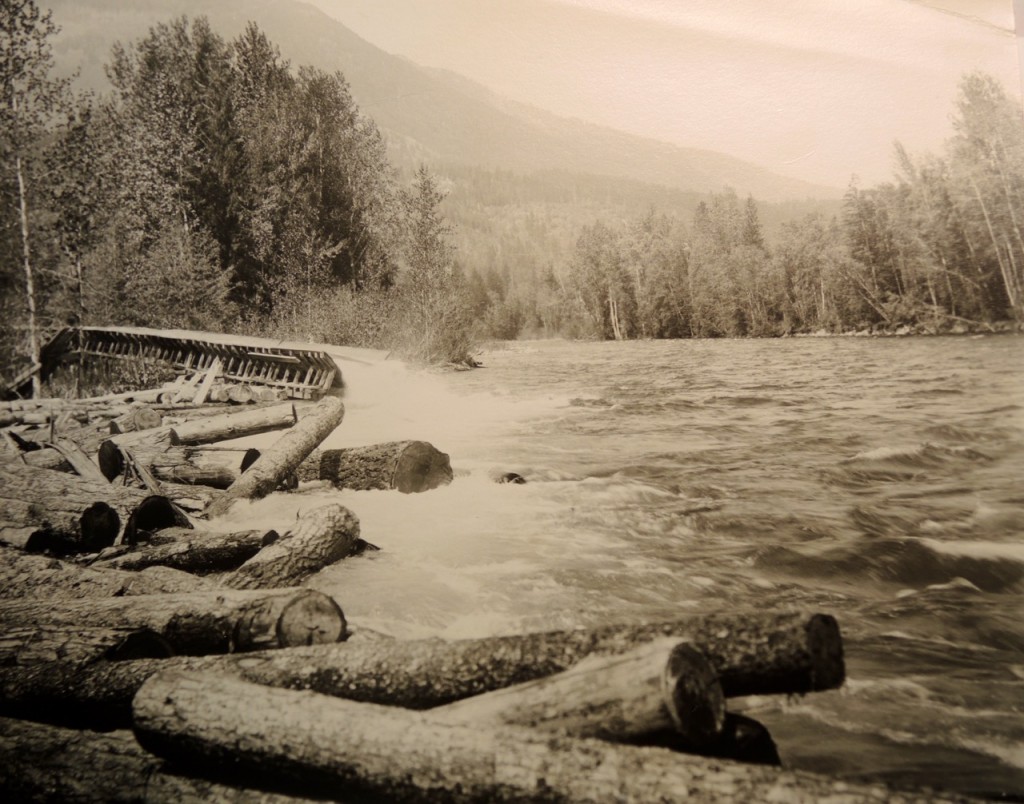 The flume outlet at the Adams River

By 1912, the nearby timber became scarce and the company was forced to develop other methods for long distance log transport. At the headwaters of Bear Creek there was a small lake (Skamana Lake) surrounded by timber. A dam with head gates and a V-shaped flume were built to float the logs the 11 miles down to the river. In order to maintain a constant flow of water, it was necessary to construct the flume with a steady grade. In some areas, the trestles carrying the flume were 50 to 80 feet high to cross gullies. 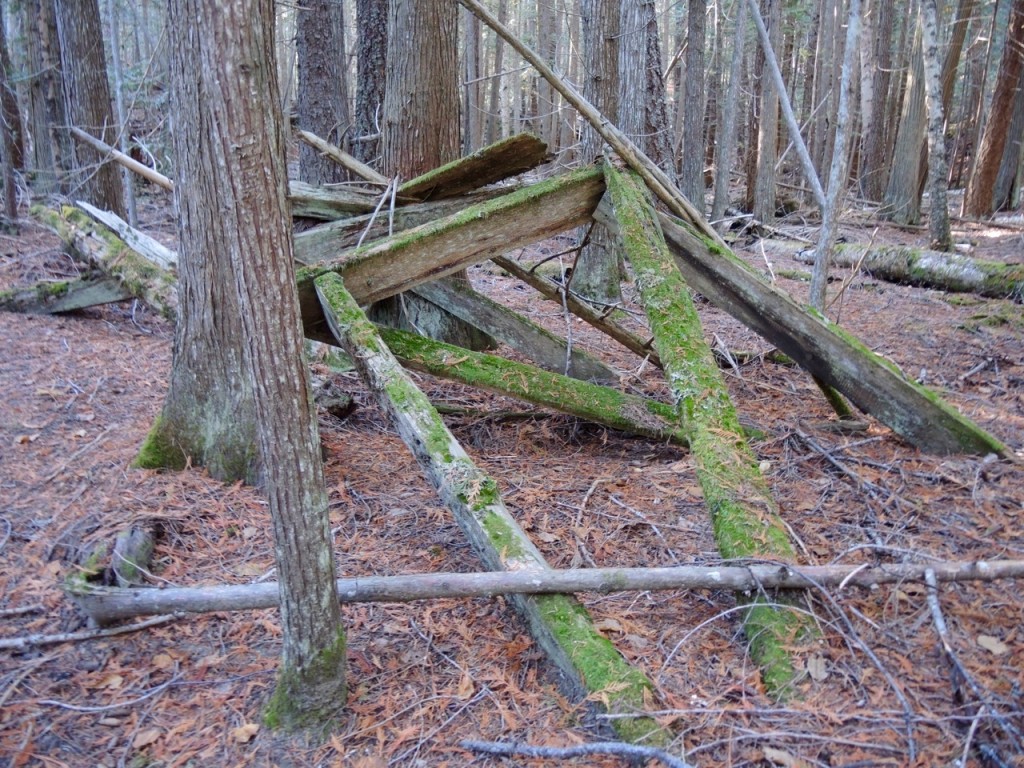 Although it was expensive to build, costing approximately $132,000, and was only functional for part of the year, the flume proved to be incredibly efficient. Logs travelled the 11 miles in only 15 minutes. No records exist about any loggers trying out what would have been the ultimate water slide! Once the timber was logged and the flume use was discontinued, many of the timbers were hauled away by nearby homesteaders to use for their construction projects. Retired Adams Lake tugboat operator Frank Fraser recalls how his father Dave, built their 2-story home out of 6 by 12 timbers piled atop each other, similar to log home construction. The house is still in use today. 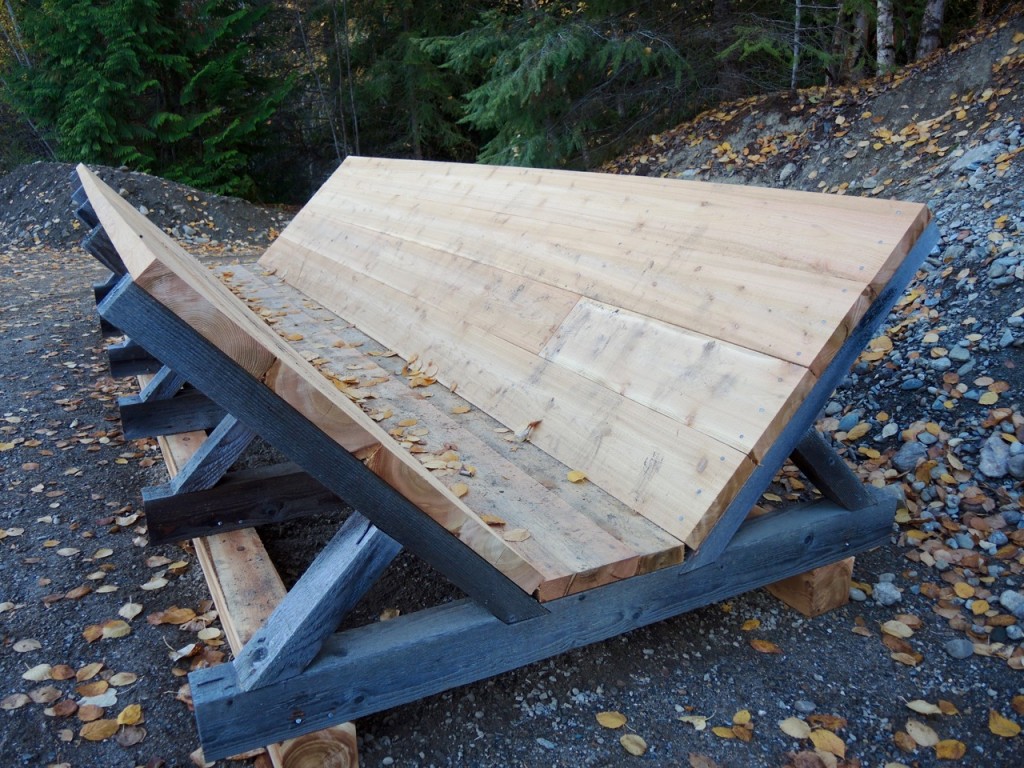 A replica of a section of the flume
There is also a lower flume trail that includes a bridge over Bear Creek and stone steps that was also built in 1987. It too is a joy to hike, especially during a peak salmon run, as it ends at a side channel of the river frequented by spawning salmon. As part of the trail renovation, there is a new parking lot adjacent to the highway that features a full size replica of a section of the flume.

This is indeed one of the best trails in the Shuswap, given its historical background and its excellent infrastructure. Spooner Construction was the contractor who did a fabulous job. This trail is one of many in Roderick Haig-Brown Park, where one could spend a few days hiking and biking. 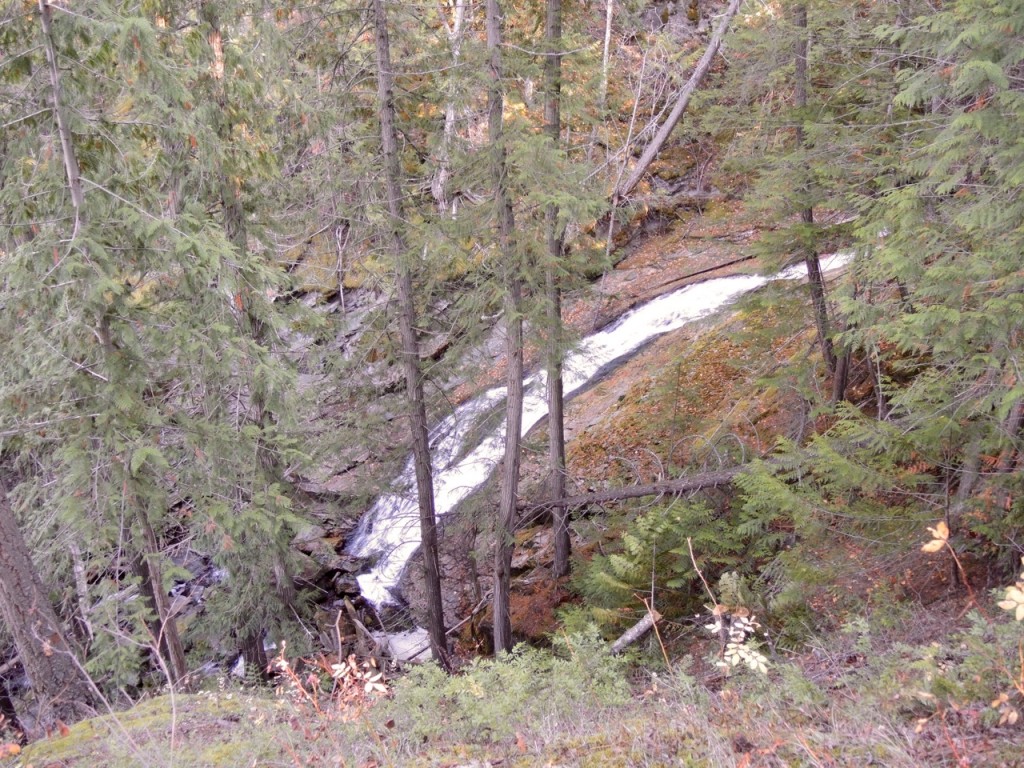 The main waterfall on the creek

A very scenic scene along the trail 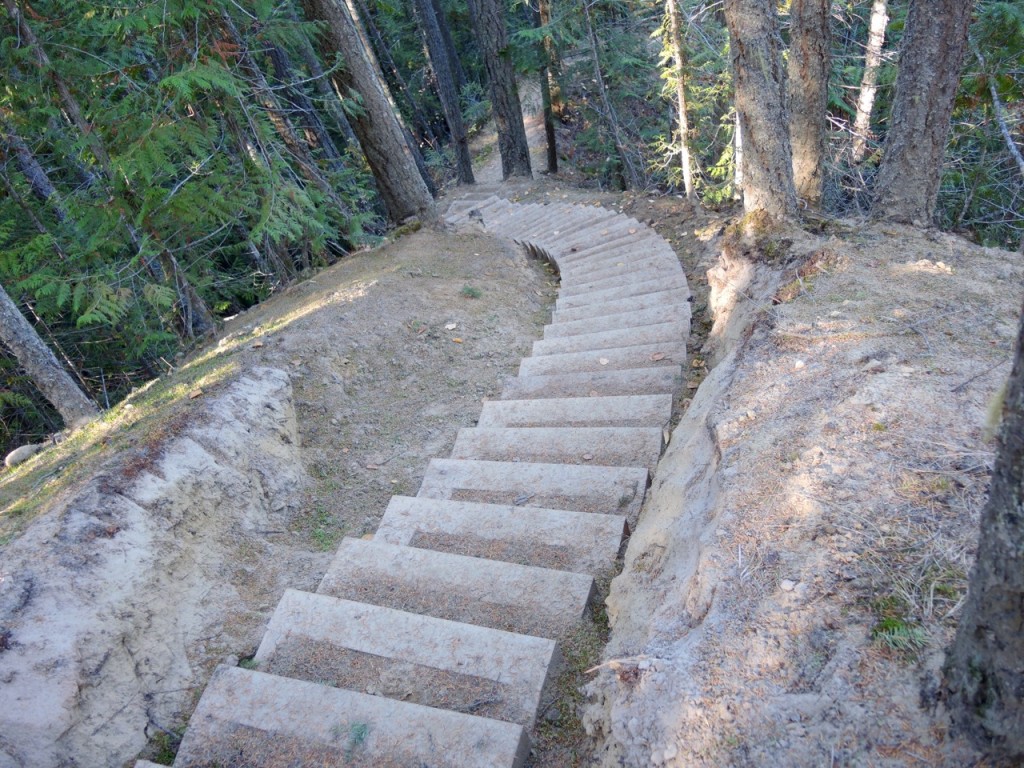 Quite the set of timber stairs