What makes Anglemont so successful?

Home » What makes Anglemont so successful? 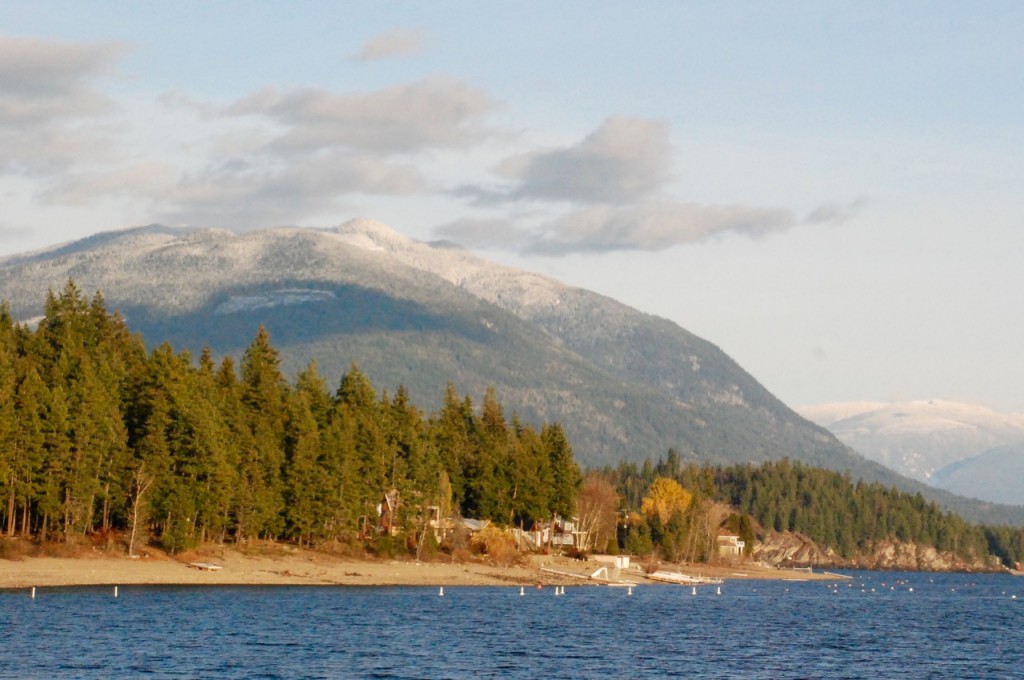 A hillside community nearly at the end of the paved highway in the North Shuswap, Anglemont is somewhat of an enigma, as despite its isolation it continues to thrive throughout the year. During a recent visit to Anglemont, I hiked the new trail into Evelyn Falls, toured the massive log inn and met with the president of the Community Centre, Fay Begin, to get a sense of what makes the community tick. Looking back on my way home, the fresh snow atop Angle Mountain, named by George Dawson in 1877 for the angle formed by the Seymour Arm of Shuswap Lake, glistened in the sun. 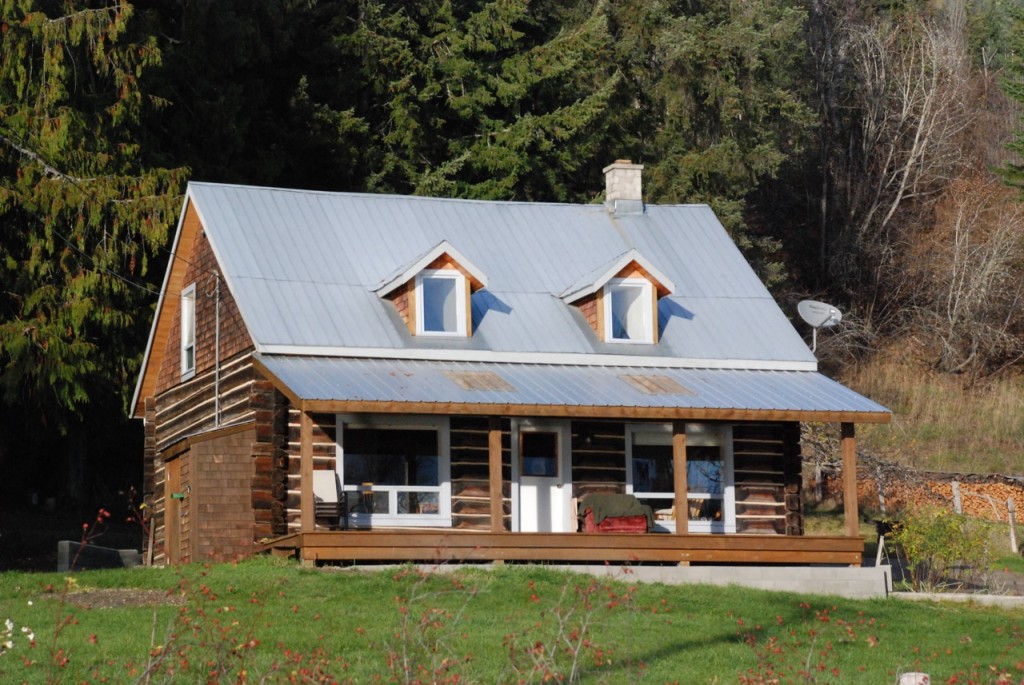 Ed Grisham homesteaded this property along the highway in 1914. This cabin was built in the early 1920s

Given its lack of good agricultural land, it is no wonder that Anglemont was the last part of the North Shuswap to become settled. The first settlers, brothers Bill and Tom Hudson arrived in 1913, which resulted in the creek being named after them. And the falls on this creek were named after Bill’s oldest daughter, Evelyn. By 1923, there were enough school-aged children to warrant a school, which was quickly built out of logs by the settlers. As was the case in much of the Shuswap region, these early settlers eked out a living by growing some fruits and vegetables, hunting and fishing and by cutting poles and cordwood. 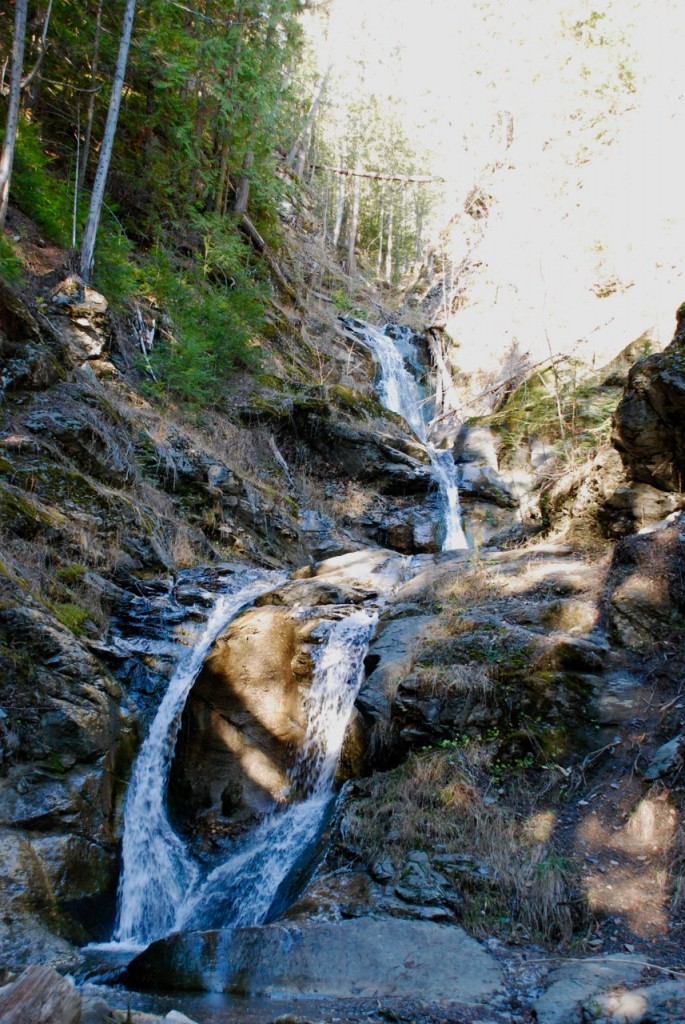 In 1925, despite having cut and sold 64 cords of firewood and shipping out 161 crates of strawberries along with currants, loganberries and gooseberries, Fred Hodson’s family still required another source of income. And thus lakeshore tourism began as they opened their home to paying guests from Victoria and Kamloops. However, by 1938, a number of the original settlers had left or passed away and with few children left in the community, the school was forced to close. 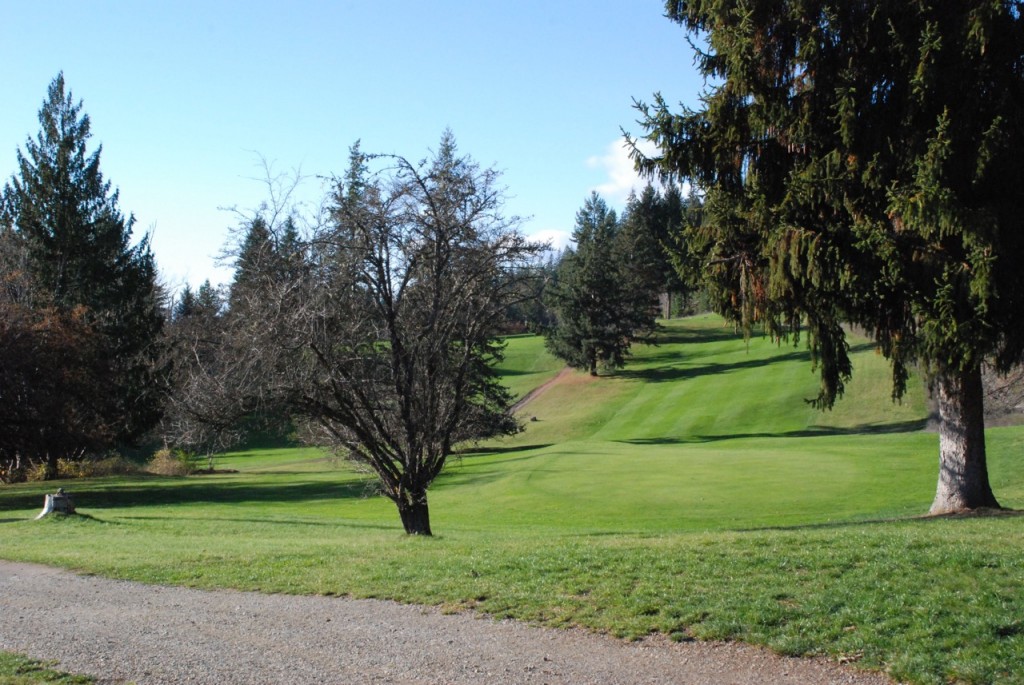 The community languished until Jack Duffy arrived from California in 1959 and purchased Tom Hudson’s homestead to first try his hand at farming. With his experience of building a small subdivision in Chico, he began developing Anglemont Estates by first building a campground, motel, marina, golf course and a floating diner. 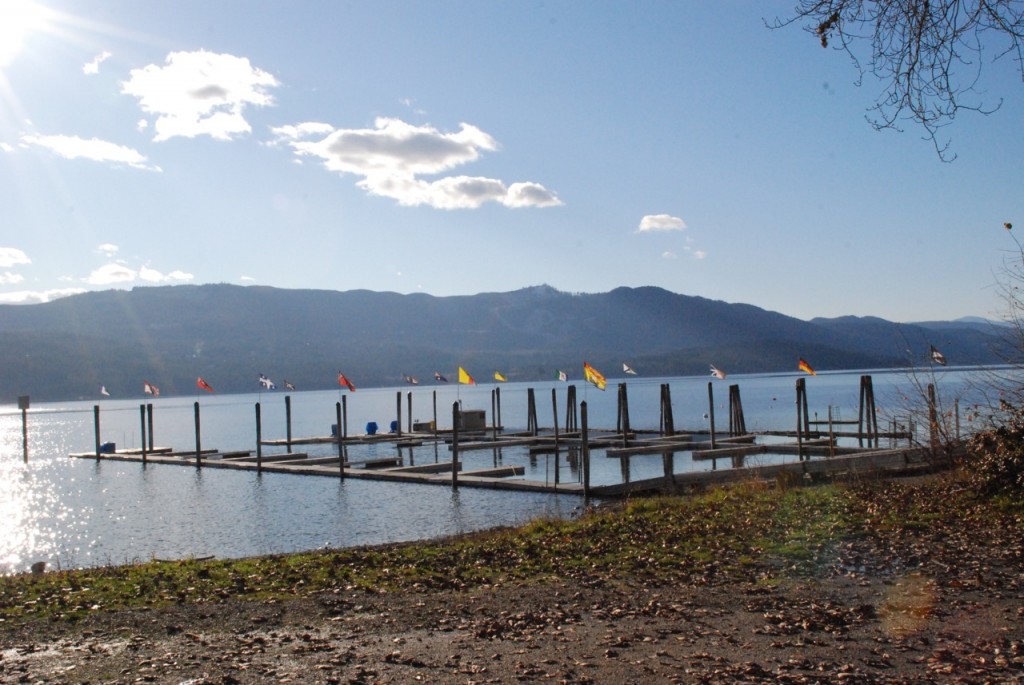 Despite most everyone considering Duffey’s plan to build a development at the end of a gravel road in a remote location crazy, he carried on. With the help of partners, additional parcels of land were purchased and a large log lodge was built. By 1971, over two-thirds of the initial 300 lots had been sold and the development had become a four-season success. Today, Anglemont’s mix of small lots and acreages is a true recreational community with a busy inn, marina and golf course. 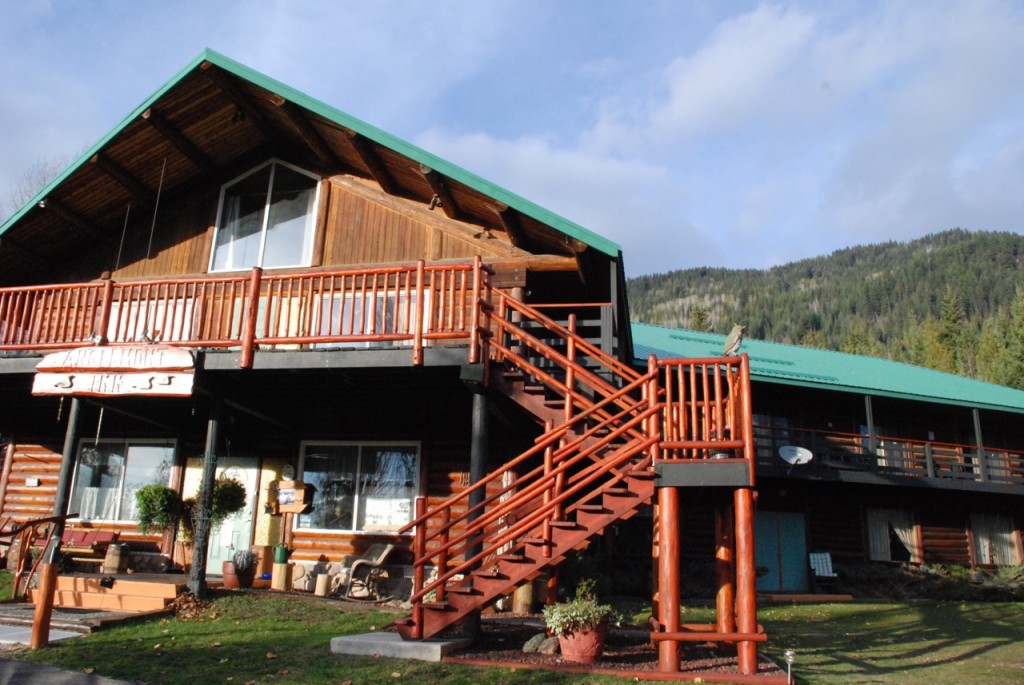 As of 2011, there were 411 residents of Anglemont, although fewer than the 454 recorded in 2006, is nonetheless a fair number of people living so far from a major centre. Most of them are very pleased that despite the high costs, they now have a clean and reliable source of water thanks to the CSRD. 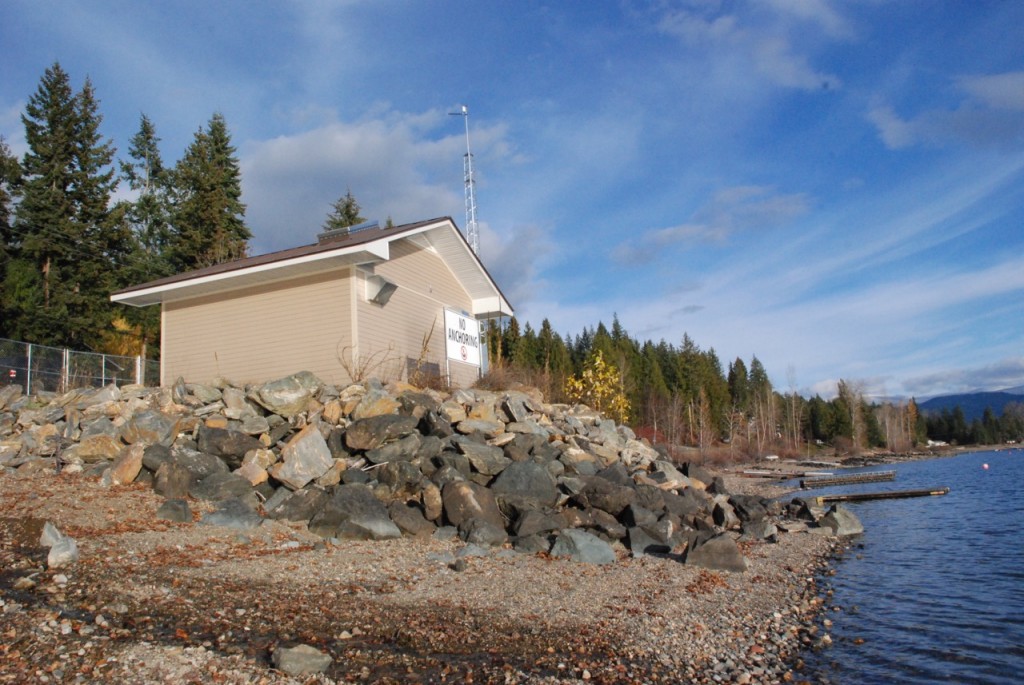 The equipment for the new water system is housed in this building.

In 1981, with many of the residents of the development aging, the Lakeview Seniors Centre was built with funding from all levels of government and through local initiatives. Today, the population has shifted to younger retirees and some young families. As a result, the name has changed to Lakeview Community Centre and the range of activities has changed as well to include those of interest to all ages. 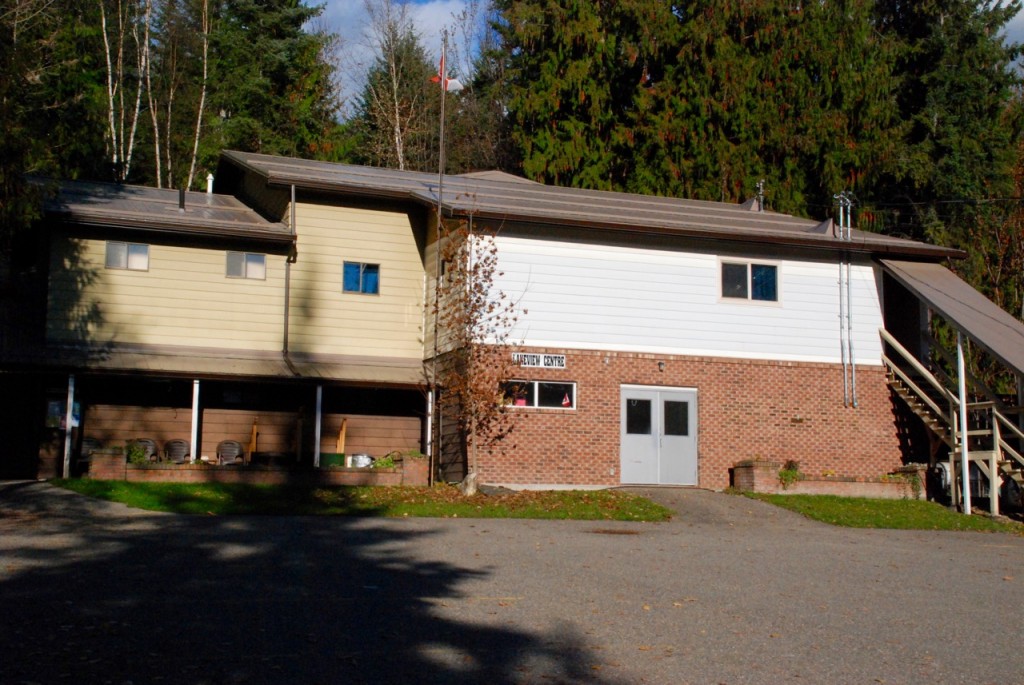 During most days of the week there are 40 or more residents at the Centre visiting; playing table tennis or pool, or carpet bowling; or taking courses in crafts and painting. As Fay explains, “the Centre is hugely important for the well-being of the community.” Perhaps the most popular activities are music and drama, given that the Anglebay Entertainers host the very popular Pig and Whistle theatre show every two years for 8 nights with upwards of 1400 people in attendance. Plus they host the community Christmas party each year.

Recently the Community Centre has seen significant renovations and more are planned. With its new large generator, the building can also serve as an emergency preparedness Centre. Now that there is so much going on at the Centre, there are fewer snowbirds heading south in the winter. Next up in the busy community of Anglemont are their first coffee house on November 27th and their craft fair the following day.

The trail into the falls is a delight, and takes less than an hour round-trip. It snakes up the hill behind the firehall through a second growth cedar forest that includes a few old giant white pines.

The Anglemont Inn is an architectural wonder, built  over a few months by the Karl and Barney Bischoff out of logs logs supplied by Ralph Bischoff. The furniture is also made of natural wood poles by the owner of the Inn, Marty McMillan. He and his wife Maureen run a beautiful facility that often hosts weddings, see anglemontinn.com 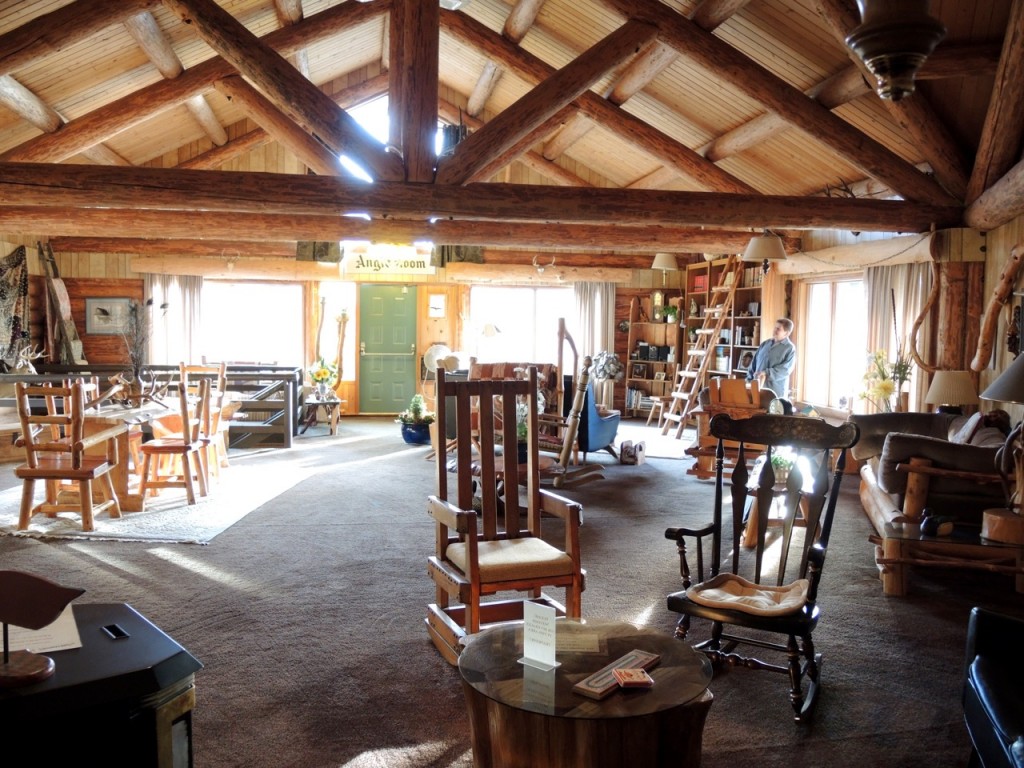 Essentially, Anglemont is also about lake shore living and the beach is paramount. 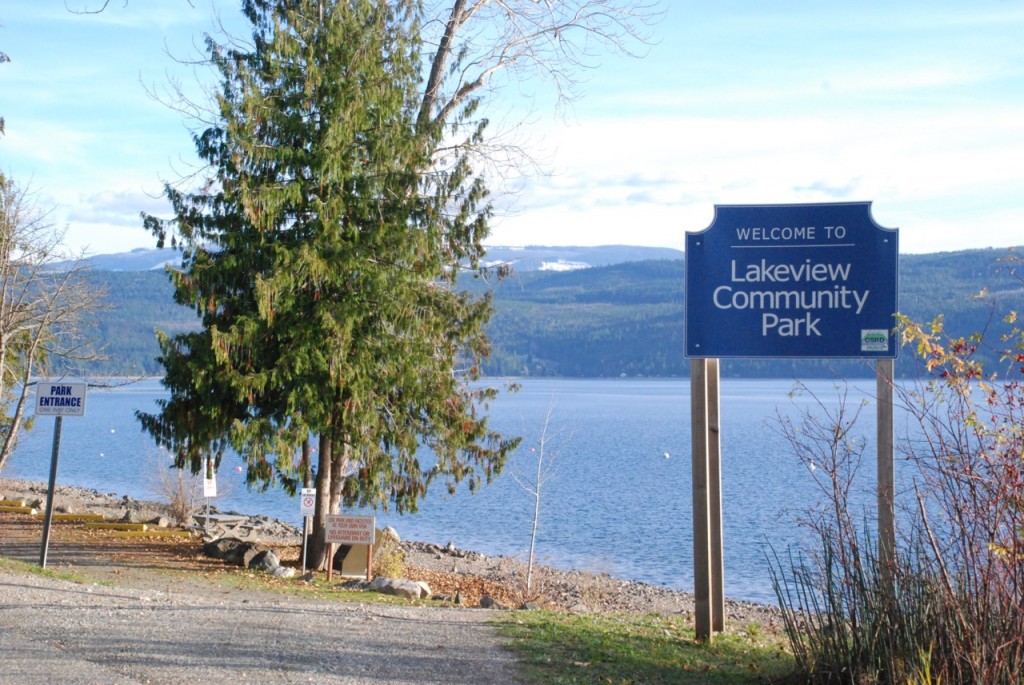 The popular public beach in Anglemont