Hiking the Tplaqin Trail to the top of the Enderby Cliffs 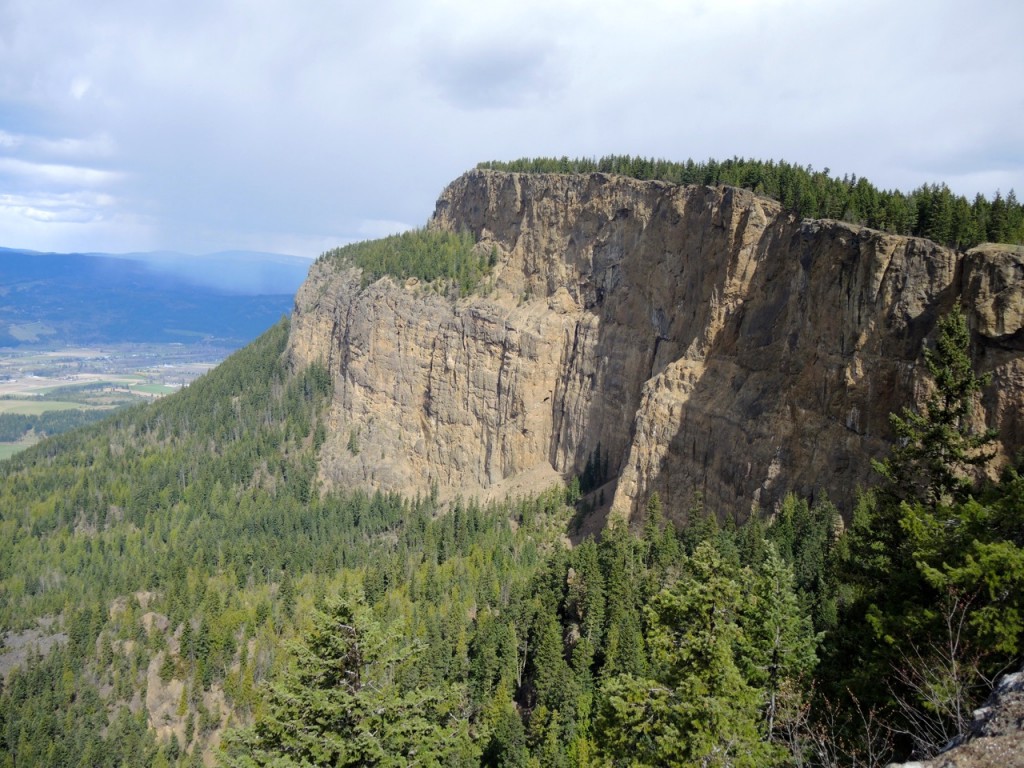 It has been 20 years since I last hiked to the top of the Enderby Cliffs, so it was a real treat for us to make the climb recently and experience the vastly improved Tplaqin trail. In 2010, thanks to the collaborative efforts of BC Parks, the Shuswap Trail Alliance and the Splatsin Band, the steep, eroding sections were removed and replaced with long switchbacks that provide a pleasant route to the 1100 metre ridgeline. 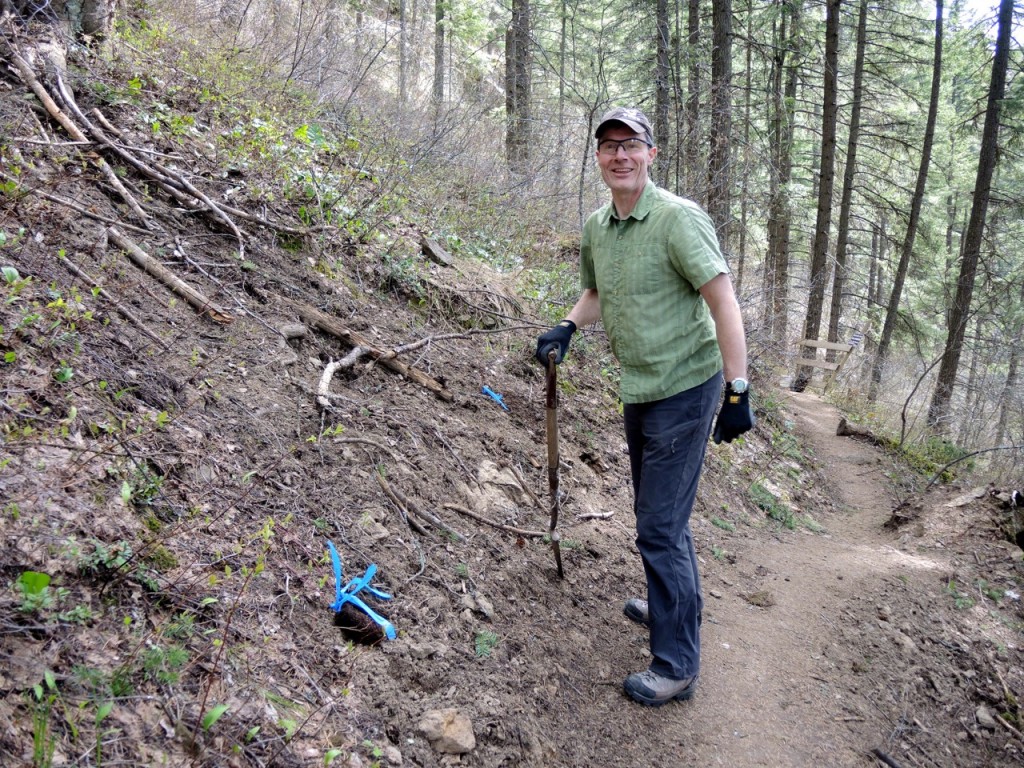 Phil McIntrye-Paul enjoying the planting to restore the old trail

With the new trail and the 40-car capacity, paved parking lot completed, work still continues on restoration and management issues. Every year, Shuswap Trail Alliance volunteers spend a day planting Douglas maple and ocean spray seedlings in parts of the old vertical trail.  Retired Skimikin Seed Orchard manager, Keith Cox, grows the seedlings in his backyard. On our descent we encountered Trail Alliance executive director Phil McIntyre-Paul and trail stewards, Damon, Jenn and Kayala Kent happily planting the saplings that they had carried up in buckets.

The management plan for the park is still being worked on, and when finished it will no doubt include the issues regarding the damage caused by unsanctioned, motorized access. Although a locked gate blocks the old road that goes through private land, occasionally someone does break through. 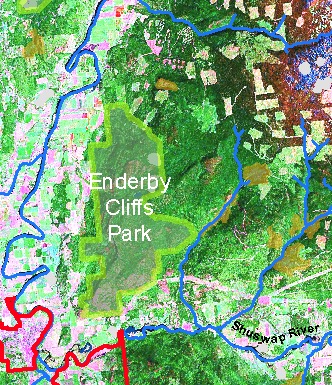 Illegal access from the north has damaged wetlands near Reeves Lake, and efforts are still needed to decommission this route, while still providing non-motorized access. The Splatsin Band is very involved in planning, as the Enderby Cliffs and the surrounding forests, wetlands, and rare grasslands are a significant sacred area. 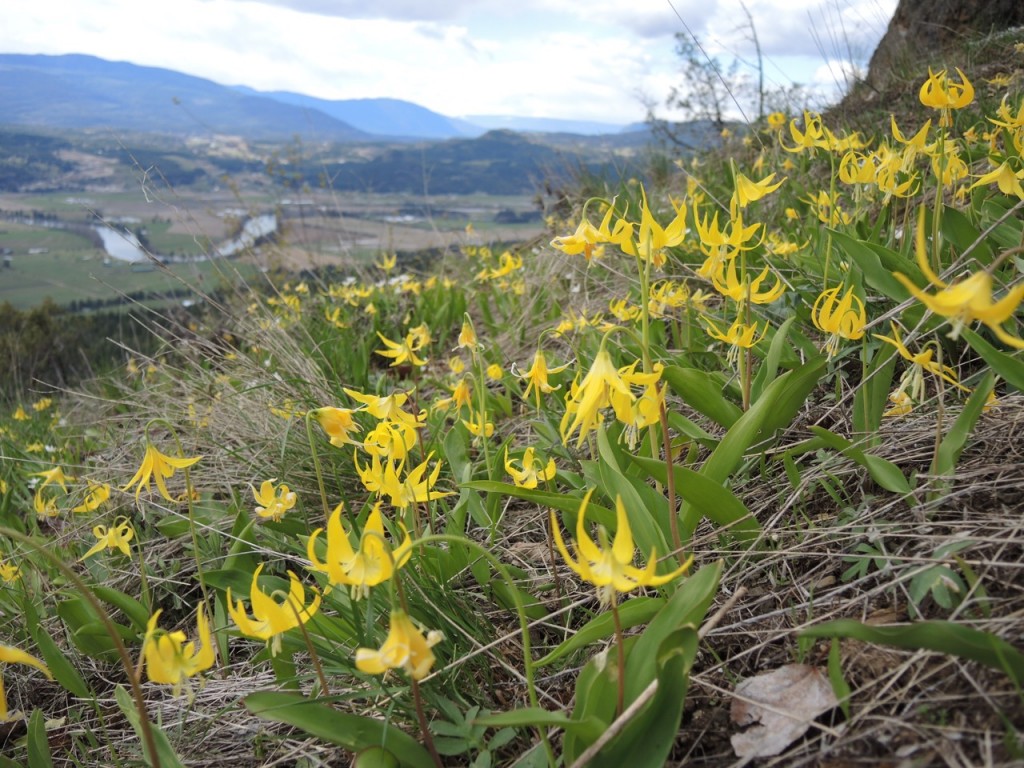 Spring is one of the best times to make the hike, as the weather is cooler, more views of the valley can be seen with leaves still in bud and the air quality is often good. We found the panorama from the top truly spectacular, especially at the summit, where you get a 180-degree vista that includes both Shuswap Lake and Okanagan Lake. The small meadow at the top is perhaps the most scenic lunch spot in the entire Shuswap, especially the stunning views of meandering Shuswap River that flows through some of the richest agricultural land in the province and the eagles and ravens that soar in the updrafts. 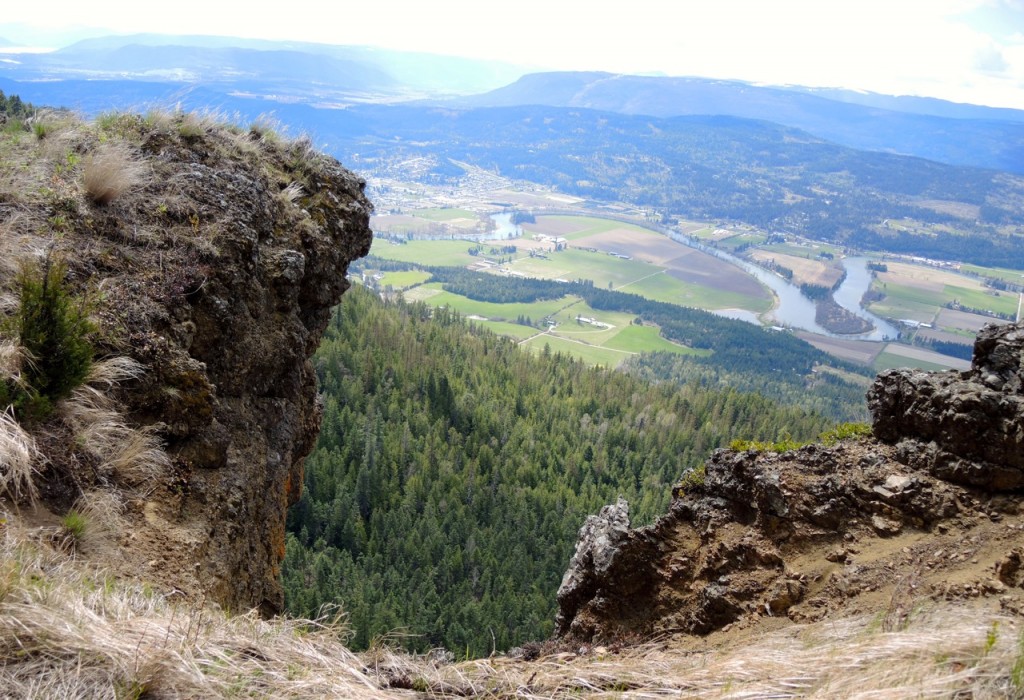 With the early spring, we were rewarded with colourful first blooms, including avalanche lilies, jolly jump-ups, twin-bells and buttercups. I was particularly impressed with the ancient Rocky Mountain juniper trees that have grown quite tall along the edge of the cliffs. It would be interesting to date one of the larger trees, as it is possible that their age could be many hundreds of years old. 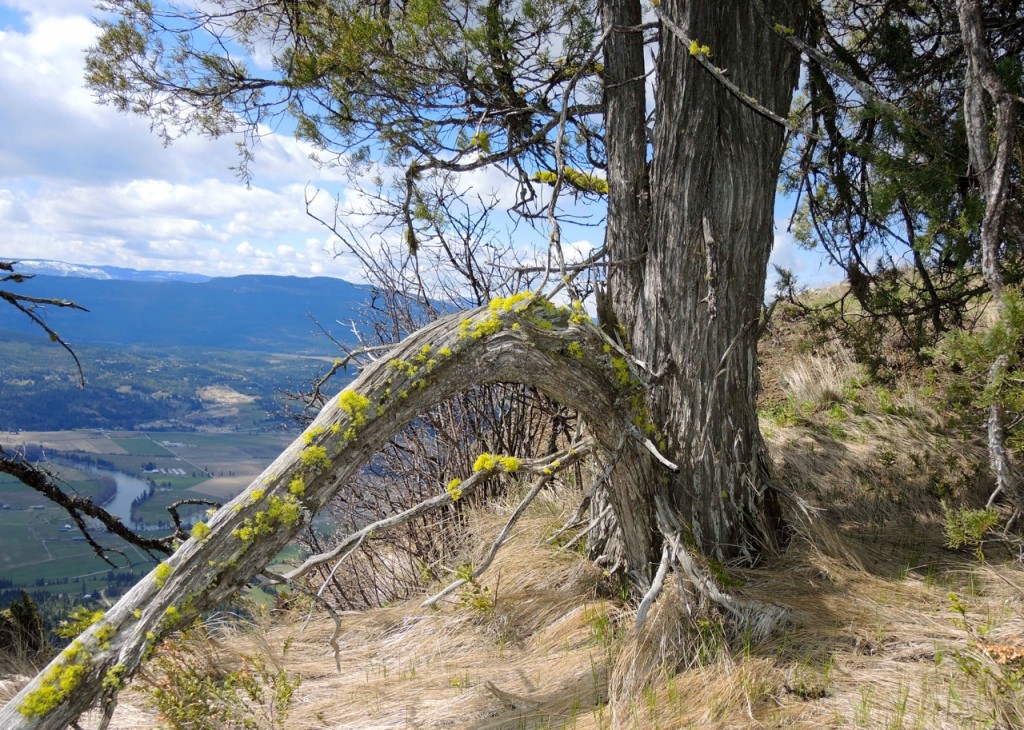 We also found some small yew trees with patches of rose coloured bark. Yew wood was used both by the First Nations and other civilizations for bows, handles, paddles and digging sticks. The Secwepemc value both the junipers and the yews for their medicinal uses.  Some of the fir trees along the edge were also remarkable due to the massive girth of the lower trunk, which grew large to withstand the wind and survive the erosion. The entire cliff edge is a unique harsh environment, shaped by the exposure and air movement where you can find old growth fir and juniper, along with grasses and wildflowers. 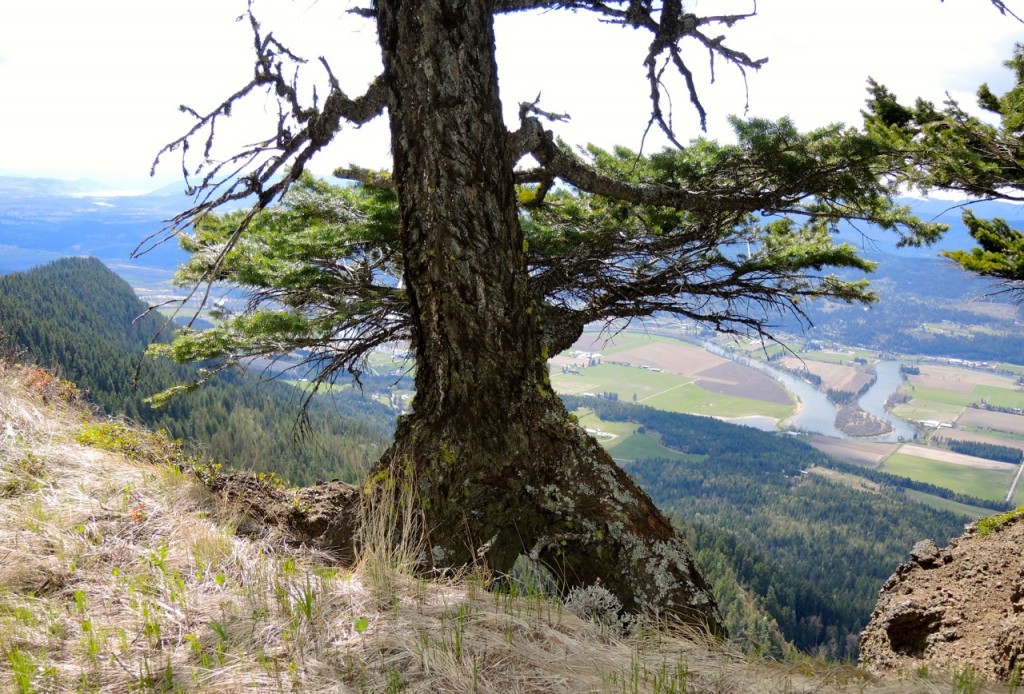 In the afternoon, the winds picked up and although we could hear the howling, the air was relatively calm along the edge of the cliff because when the wind hits the cliff it bounces up. Just down from the summit, I looked over to take photos of the cliff face and recent slides, but with the utmost of caution and care. The hike down was even more scenic as we faced the view and could get a better sense of the terrain. 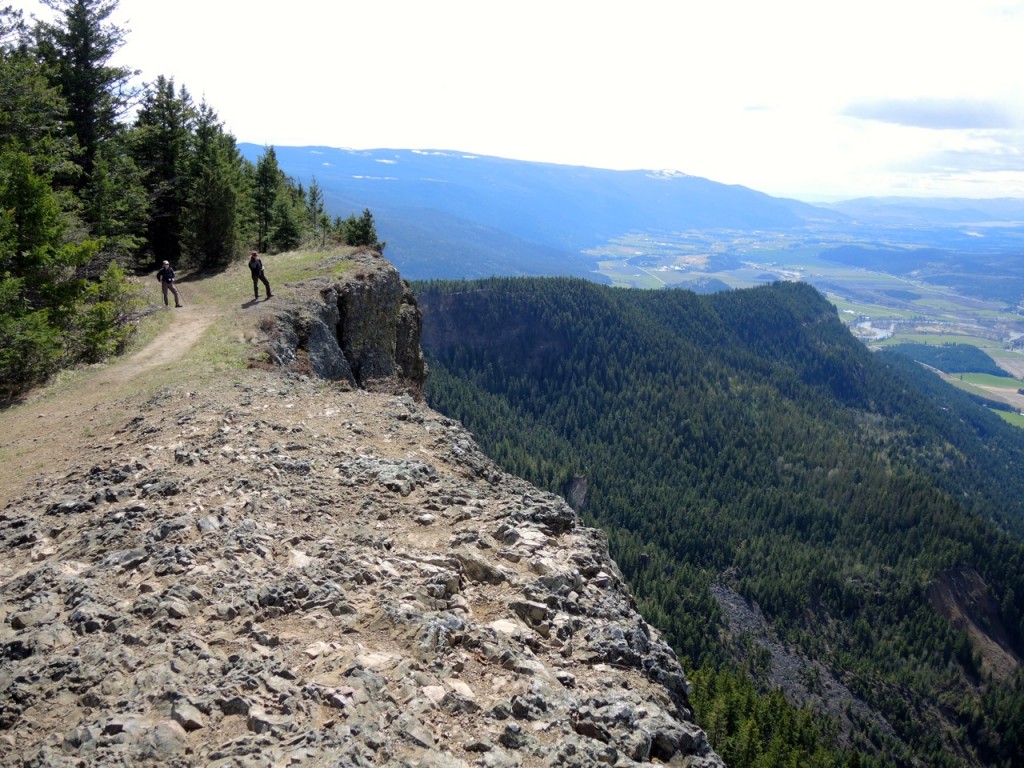 Tplaqin is a very popular trail that sees as many as 10,000 hikers in a year. On May 3rd, the Hospice Society in conjunction with the Trail Alliance sponsors an annual Enderby Cliffs hike and the popular club, Shuswap Outdoors will have its annual hike on May 31st.