Quaaout – a community enhanced by tourism 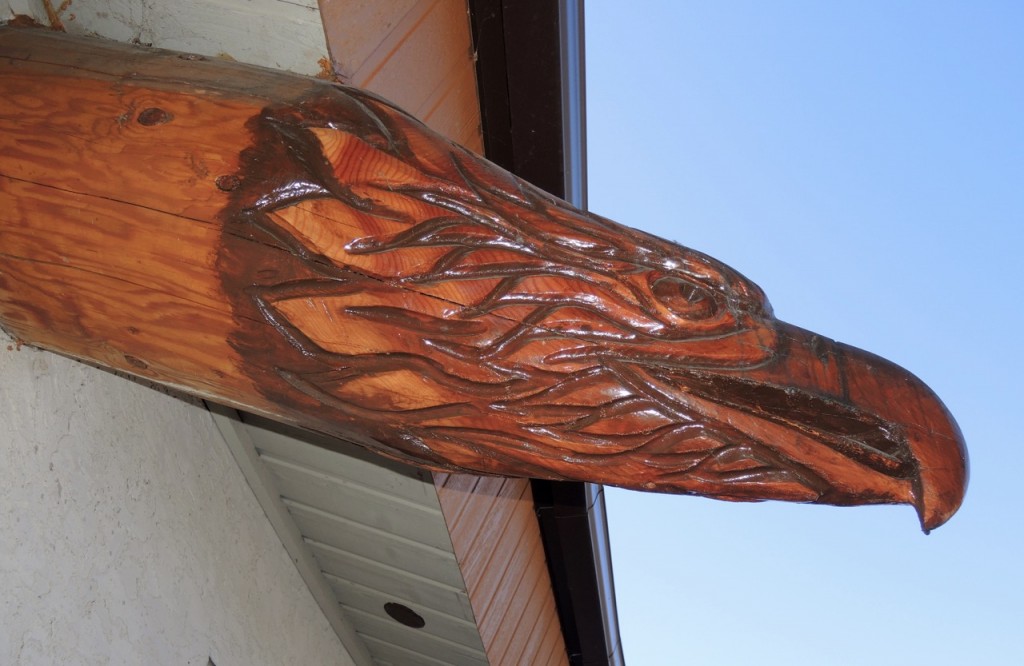 There has always been a significant community on the north side of the Little River, as evidenced by the many kekuli pit house depressions near the outlet of Shuswap Lake just to the east of the Squilax gas station. At one time there may have been many hundreds, if not thousands of Secwepemc people wintering there on what is now sacred ground. However, by the late 1970s, the Little Shuswap Lake Indian Band reserve was looking somewhat threadbare, with high unemployment, very few band members living on the reserve, and its prime recreational lakefront property dominated by leased beach cabins. 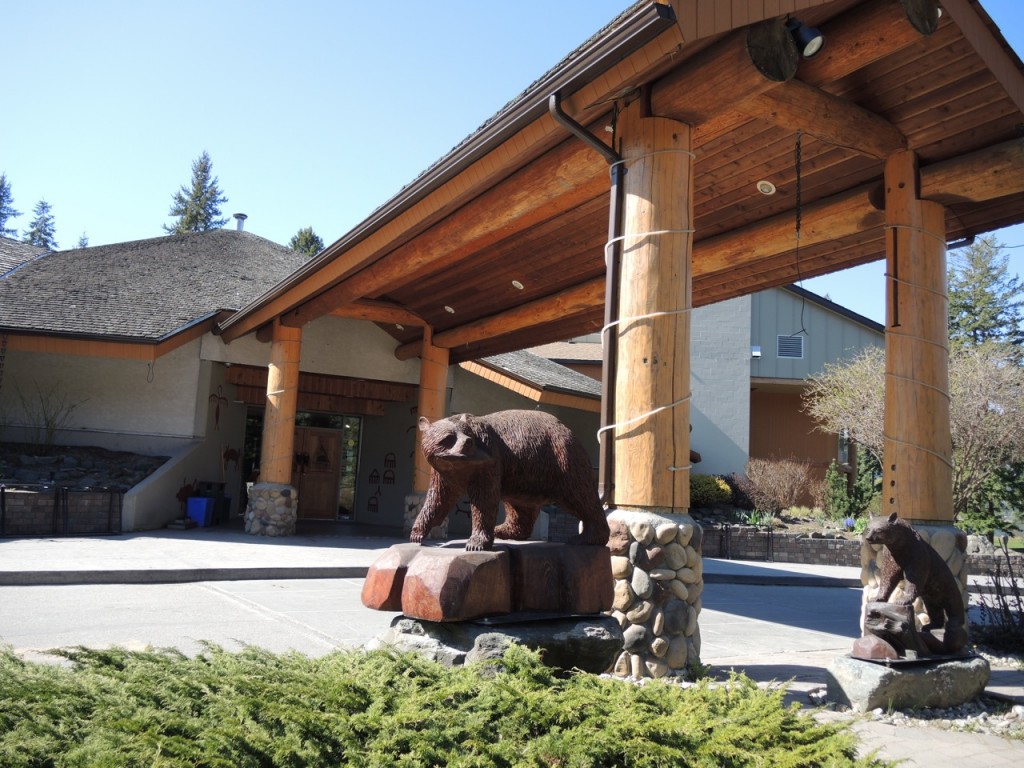 When Felix Arnouse became chief, he, the serving band councillors and band members decided it was time for many much needed improvements and with the leases coming due there was an option for major changes. After numerous band meetings and much brainstorming the decision was made to develop a resort and not just any resort, but a world class, four-star destination lodge, conference centre and golf course. 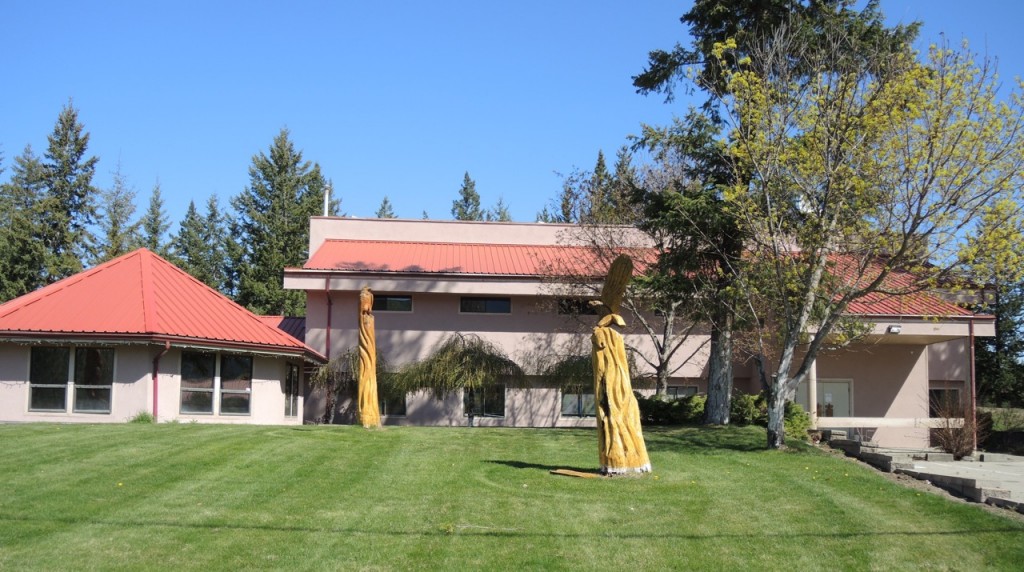 The first step was building a new band office and community hall so the council and staff could finally move out of the dilapidated trailer. As Secwepemc culture was also high on the agenda, Pow Wow grounds were built and the first event was held in 1981. Once a substantial number of leases on Little Shuswap Lake were retired in 1989, construction of the lodge began with a design inspired by the traditional round pit house and that included massive log beams, animal carvings and rock painting designs. 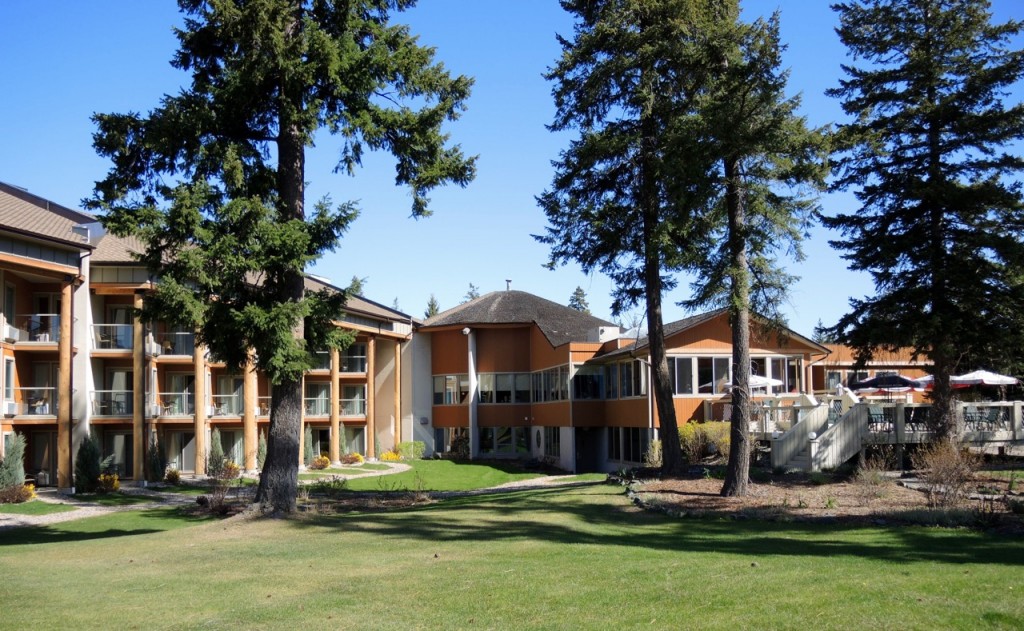 As the resort grew, so did the community with improved infrastructure and more services for its nearly 200 resident band members. A fire-safe, southwest architectural theme was chosen for many of the new buildings, with stucco exteriors and tile or metal roofs. Driving past the resort, one will find a combined day care and wellness centre. Behind the centre is housing for the elders and along the lake are modern town houses. In the hills above is a massive water tower that was recently connected to a new pump house along the Adams River. 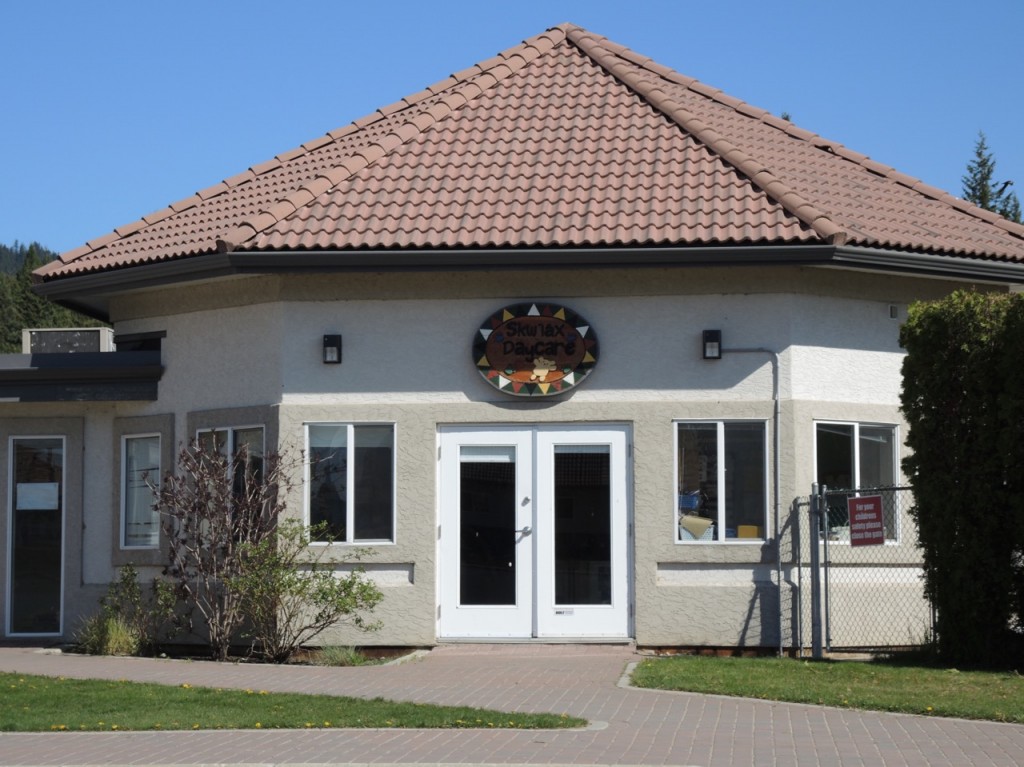 The Daycare is adjacent to the Wellness Centre

Fire safety is key at Quaaout, with the new fire hall built across from the administration building. The old fire hall is now home to the band’s cultural centre, where Barb Callihoe works with youth and elders to tan hides and create traditional moccasins and baskets made from birchbark or pine needles. Some of these goods are marketed in the storefront next to the gas station. During the spring, summer and fall, Barb’s group heads out into the forests to collect craft materials, medicinal herbs, berries and other traditional plant foods. 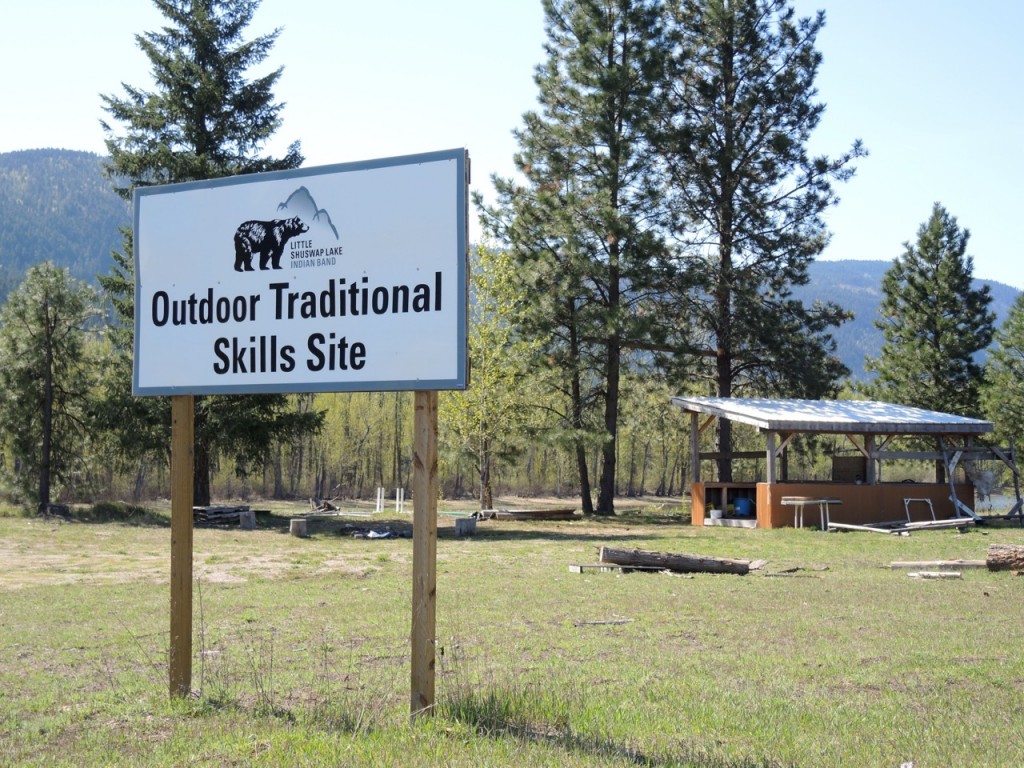 As is true for many First Nation communities, salmon are essential to Quaaout culture and sustenance. Fisheries Manager Aaron Arnouse looks after the fish fence at Scotch Creek as well as numeration projects for many other local creeks and rivers. During the runs, from 8 to 15 staff monitor the streams. They also bring fish from the Thompson River and prepare it in the traditional manner for the elders in the community. His focus is on sustainability, as despite direction from Fisheries and Oceans to allow the harvest of thousands of fish, he often decides to let these fish spawn instead. 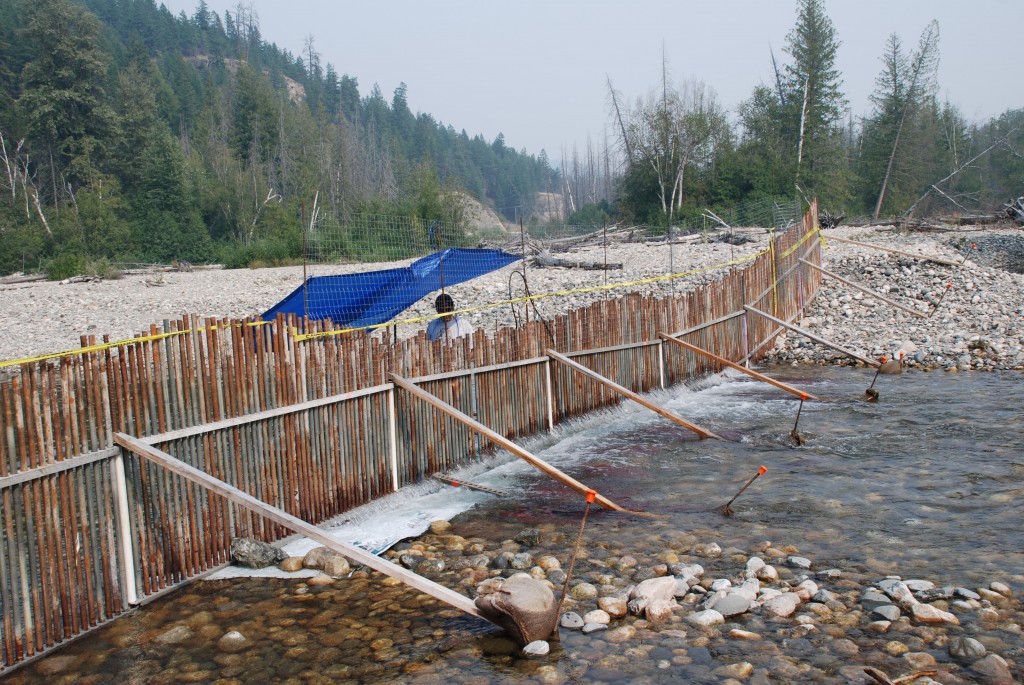 The Little Shuswap Lake Indian Band’s new chief, Oliver Arnouse, is proud of the developments made at Quaaout and he is dedicated to maintaining traditional cultural values. He teaches their language, Secwepemctsn, at the hall in Quaaout and in the band’s small hall on their reserve in Tappen. Quaaout, explained Chief Arnouse, means, “where the sun’s rays first touch in the morning.” Also, the lodge was designed with the four corners defined by where the sun’s rays first touched at the beginning of each season. 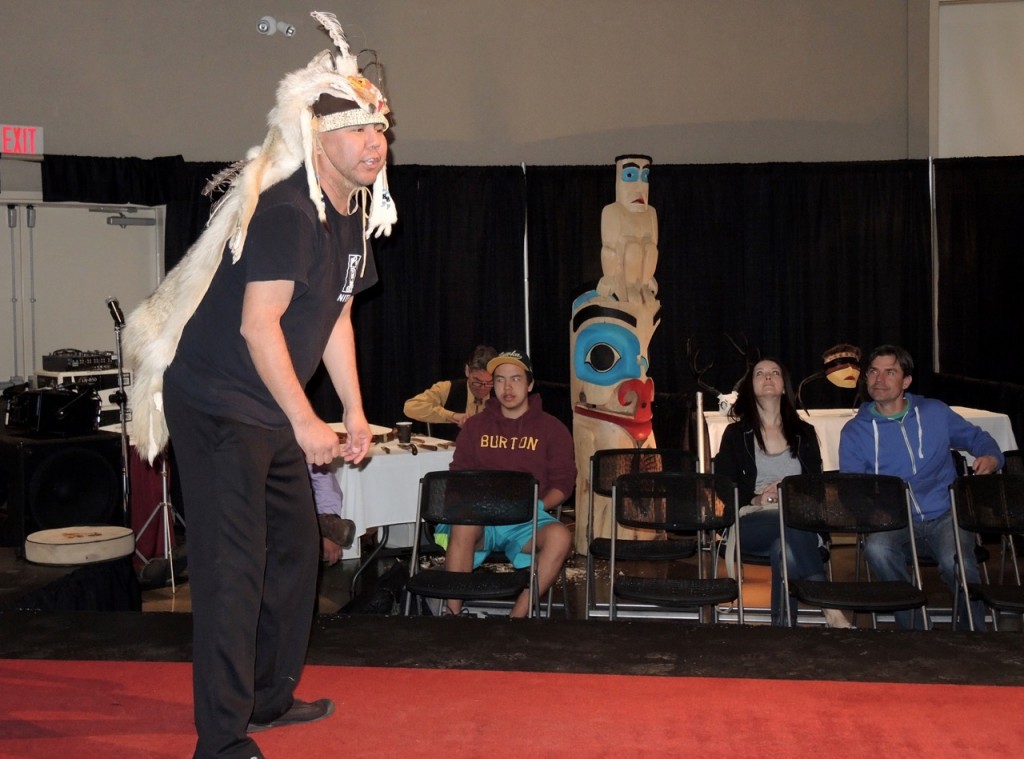 Kenthen Thomas performed at the festival

After the lodge opened in 1991, business was slow to get going, but it began to get much busier once the conference centre was completed. However, it was the award winning Talking Rock golf course that has really made the difference and now the resort is booked a year in advance. When I last visited on a Sunday to take photos, there was an Aboriginal Art Festival in the conference centre, an outrigger canoe group out on the lake, golfers coming and going, and the popular brunch filling the restaurant with customers. 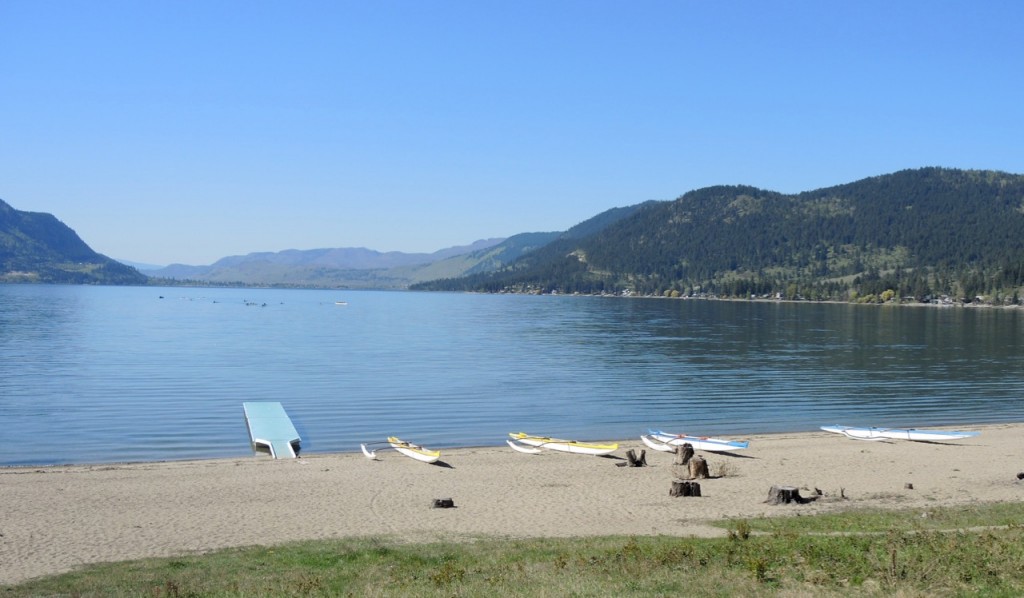 One outstanding feature of the resort is the traditional grounds between the lodge and the lake, where there is a kekuli to explore, a salmon smokehouse to see, interpretive signs to study and a magnificent view of the Little Shuswap Lake to enjoy. For many guests and visitors, it is Quaaout that has put the Shuswap on the map. We should all be appreciative of how this one small First Nation band turned an exciting and ambitious vision into an amazing reality. 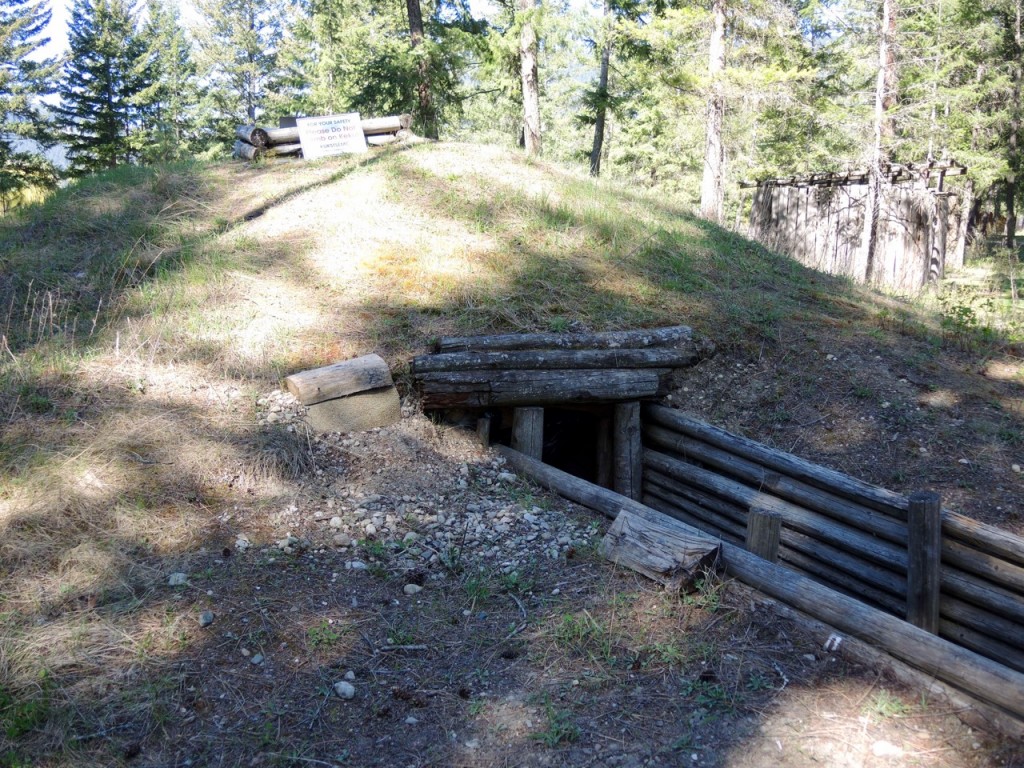 Tradional kekuli pit house on the grounds behind the Quaaout Lodge

There is so much more that could be written about Quaaout. There is a walking trail along the road, a ball park, a community beach open to the public and another nearby subdivision on the way to Adams Lake. Along the highway, a large field that used to grow hay is now a landing strip. There is a long-term land use plan that calls for another development with townhomes. This year’s Squilax Pow Wow has been cancelled to allow time to improve the grounds and repair some of the facilities there.

If you have never visited, Quaaout, considered a visit there soon to enjoy the restaurant at the lodge and the beautiful grounds. If you golf, you will no doubt enjoy the golf course, one of the best in our region.