An expedition into the Mara alpine

Home » An expedition into the Mara alpine 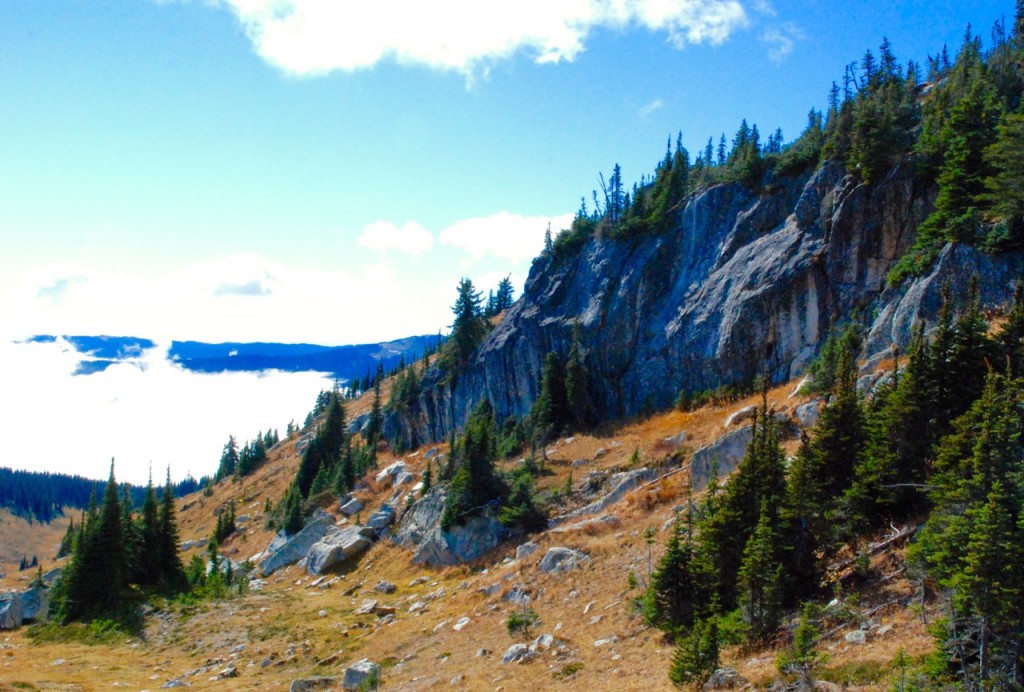 With a goal to visit every part of the Shuswap, it was time to explore Hunters Range and attempt to hike to the forest fire lookout. After studying the maps and trail guide, our group headed out early in the morning via the Owlhead route on a glorious fall day. 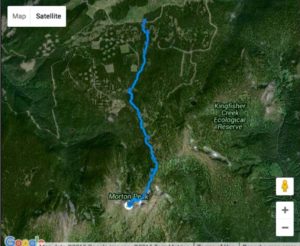 At the beginning, the trail through the mixed age spruce and balsam forest was well worn and clearly marked, and the blazes on the trees looked 50 to 75 years old. But as we neared the alpine, we were thankful that one hiker had a GPS as there was no longer a visible trail or markers. 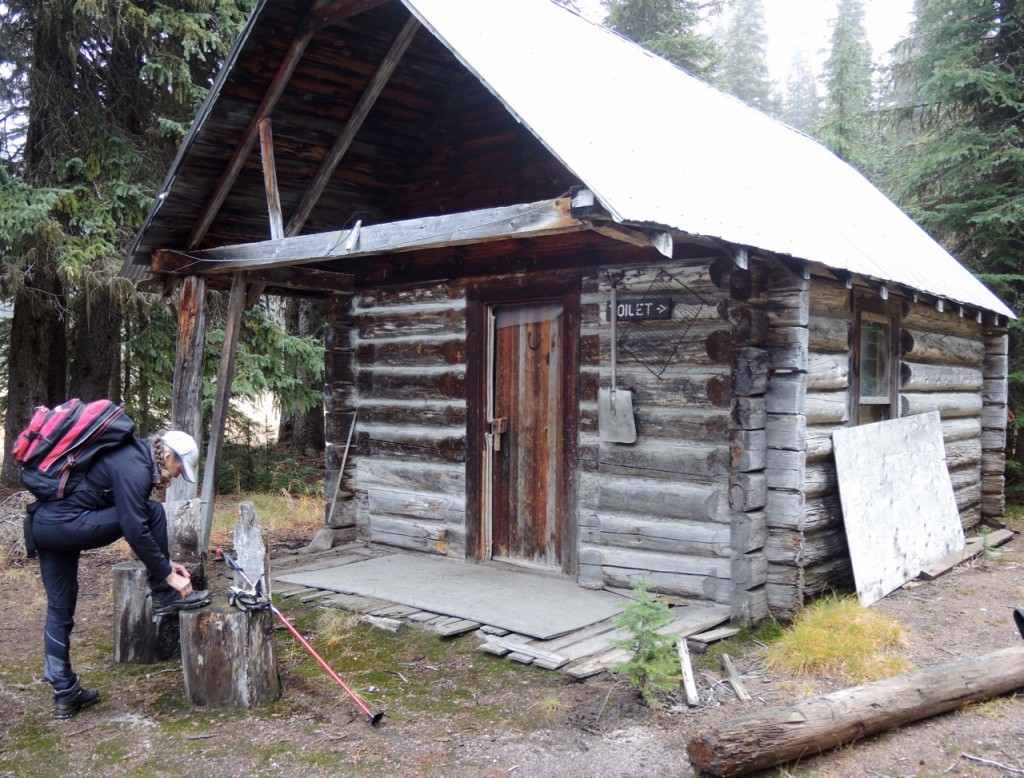 The first stop was the old forestry log cabin that was used as a supply post for the forest fire lookout station. Although it is quite dilapidated, it could be easily restored for its historical value. The outhouse is still functional and the trail signage dates back to when this was a forestry recreation trail. Just past the cabin we came across the first of some 40 boardwalks, in various stages of disrepair, that were built to keep hikers boots dry and protect the wetlands. Rather than boards, most are built with logs and apparently it was dirt bikers that trashed the majority of them. 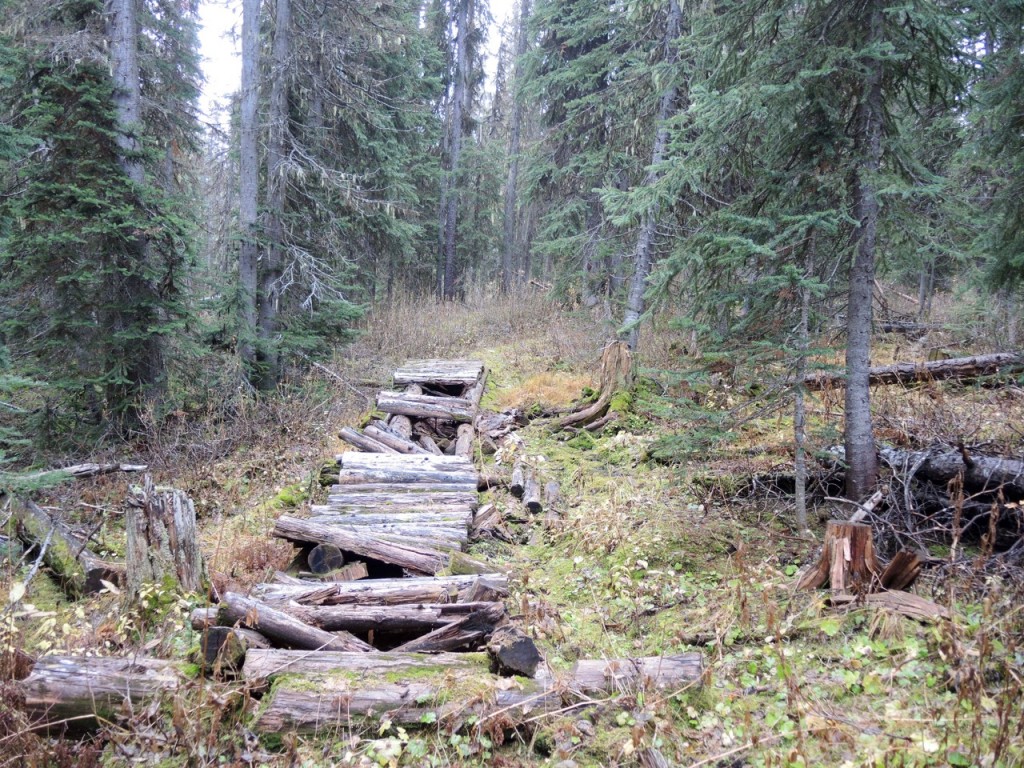 One of the very sad looking “board”walks

We were forewarned about the condition of the trail, but we were still shocked at the sight of the devastation as we approached the alpine. The motorized “wreckreationists” have used the snowmobile trail to get into the alpine on their ATVs and in the process; they converted the sensitive meadows to wide expanses of mud. 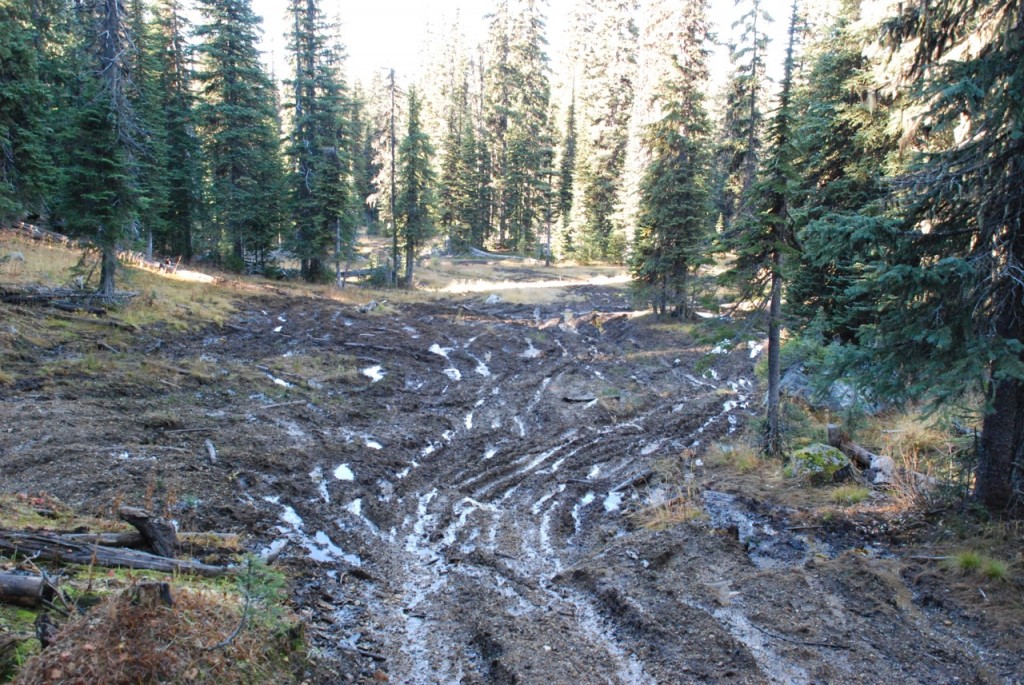 Riders could get charged for this, but there is very little enforcement

It was difficult for us to negotiate the trail without getting muddy. It is mind-boggling how people who apparently enjoy being in the mountains can guiltlessly damage sensitive ecosystems for pleasure. 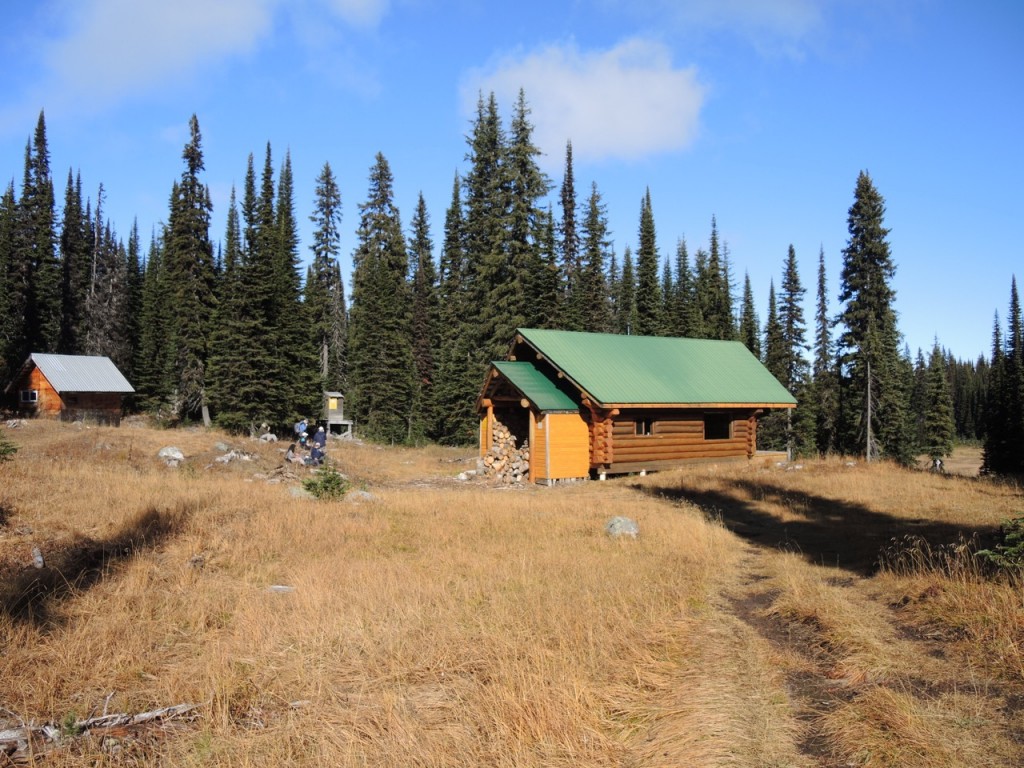 After a short break at the impressive Owlhead snowmobile log chalet, we carried on through the meadows where we were fortunate to see a young grizzly bear dash into the trees when it sensed our approach. As we neared an alpine lake it was good to see the ATV track finally fade out. 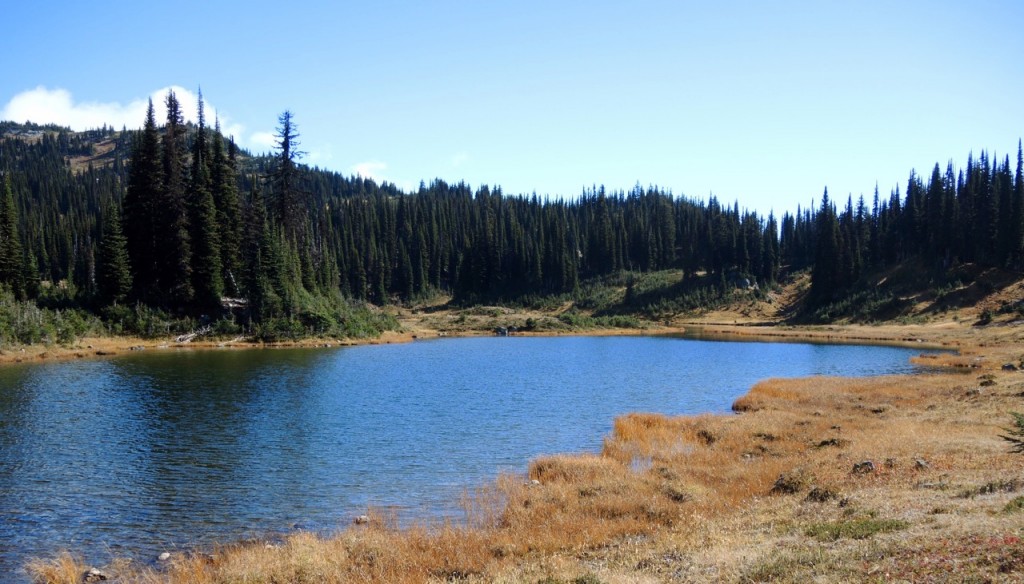 One of Twin Lakes, a peaceful sub-alpine scene

When we climbed farther, we came across a single wire that once stretched all the way to the lookout and was used for telegraph communication to Sicamous. 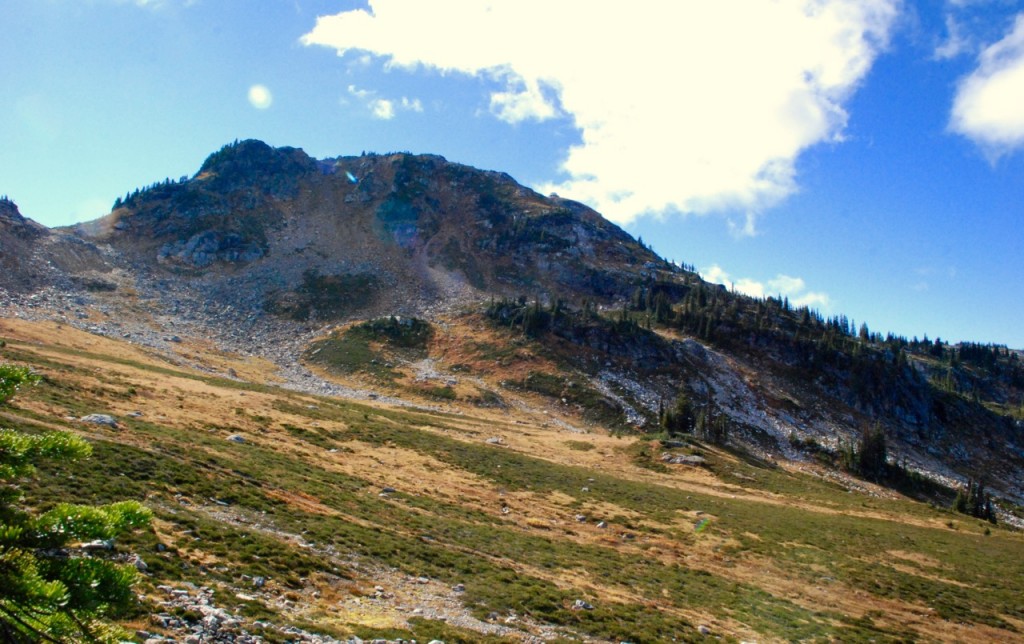 View of Morton Peak from the bowl, fire lookout on the right

Although the clock was ticking close to when we needed to begin the descent, we pushed on through an alpine bowl to Morton Peak, where we could see the lookout station. We managed to make it to the shoulder of the peak, where we hoped for a view of the valley, but instead all we saw was an impressive wall of fog below us. 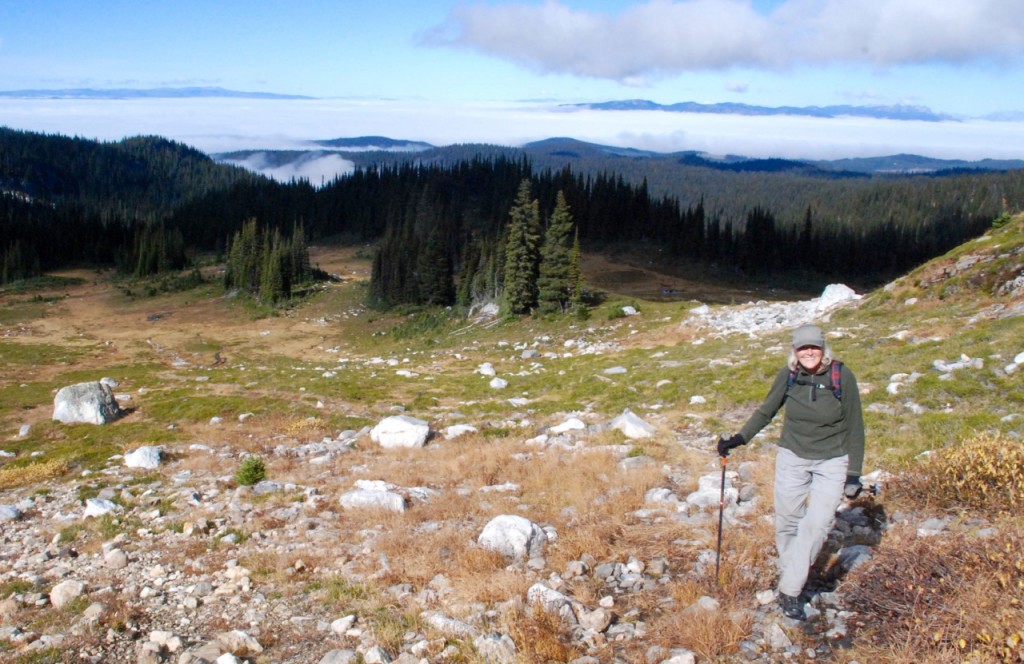 The bowl to east of Morton Peak

Nonetheless, it was exhilarating to hike so high in the alpine. On our return, some of us took the time to pick up beer cans and other trash no doubt discarded by the sledders.

The original Mara forest fire lookout was built in 1925 and it was replaced with a new structure in 1950, which was used until 1998. As the building was in poor condition, there was talk of removing it. Thankfully, the Kingfisher Interpretive Centre came to the rescue and took responsibility for the structure, including making repairs. In 2012, the BC government provided funds for a complete restoration and then took over management of the site through Recreational Sites and Trails BC. 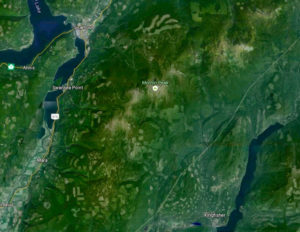 The alpine area is more accessible from the Kingfisher area near the Shuswap River, where a logging road ends close to the lookout. Other roads, including one near the Noisy Creek campground at Mabel Lake also provide access to the Mara plateau. Problems persist on this side as well, with damage done by both mudboggers and ATVs near three fishing lakes, Morton, Blue and Cummins. 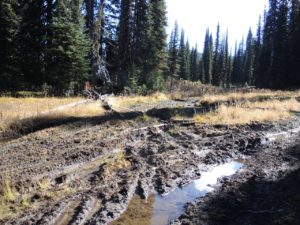 Imagine how difficult it would be to try and restore this!

Under the leadership of the Shuswap Trail Alliance and the Splatsin Band, a working group was established to address the environmental degradation caused by motorized recreation on Hunter’s Range. Thanks to the participation of local ATV and snowmobile clubs, Tolko, local range licensees, the CSRD, BC Parks and Recreational Sites and Trails, efforts will begin this fall to permanently block motorized access with large boulders. As well the group will focus on educational efforts and establishing dedicated areas for ATV use. There is also a commitment for restoration efforts, with the understanding that restoring soil disturbance in the alpine faces many challenges.

The motorized vs. non-motorized controversy certainly has found a peak in the Hunters Range, where the damage has reached a new plateau. I can only hope that the plans to block access works, as it looks like in some areas it could not get any worse. The same problems have been occurring throughout the province for years and that is why the BC government finally brought in license and registration for off-road vehicles. They were the last jurisdiction to do this in North America! And yet the new rules do not kick until next month, and implementation will be incremental. 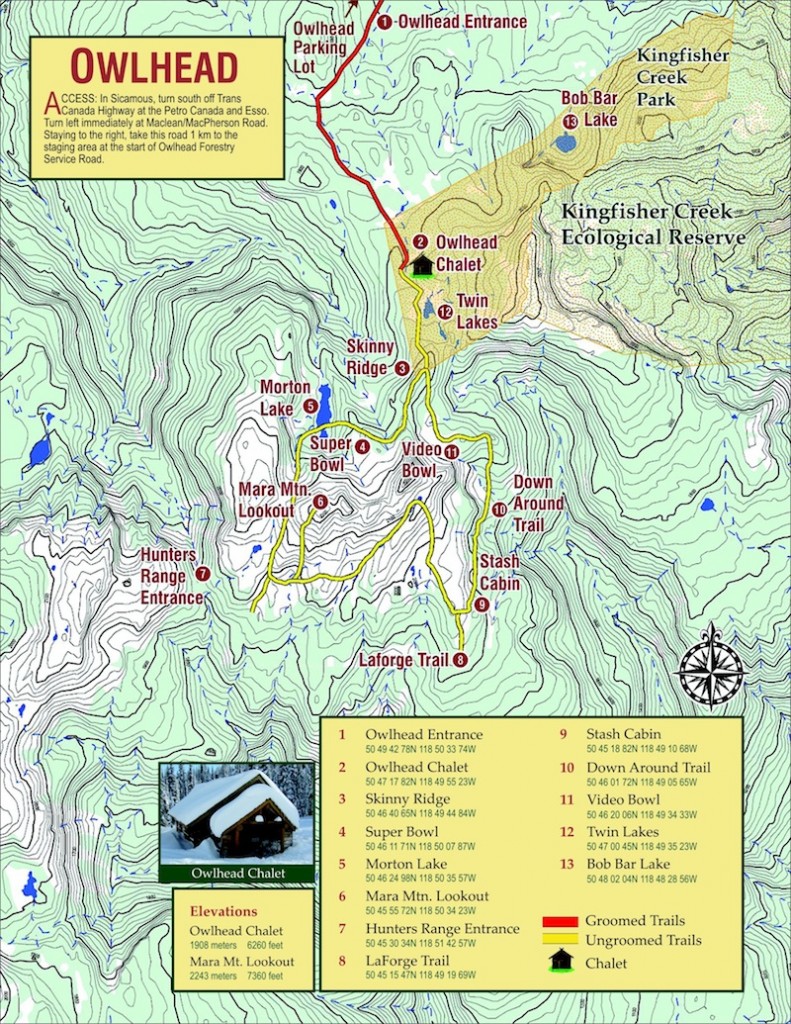 Hunter’s range is a busy place, especially in the winter, as this snowmobile map shows. There is another chalet at Blue Lake.

Mores photos of the damage: 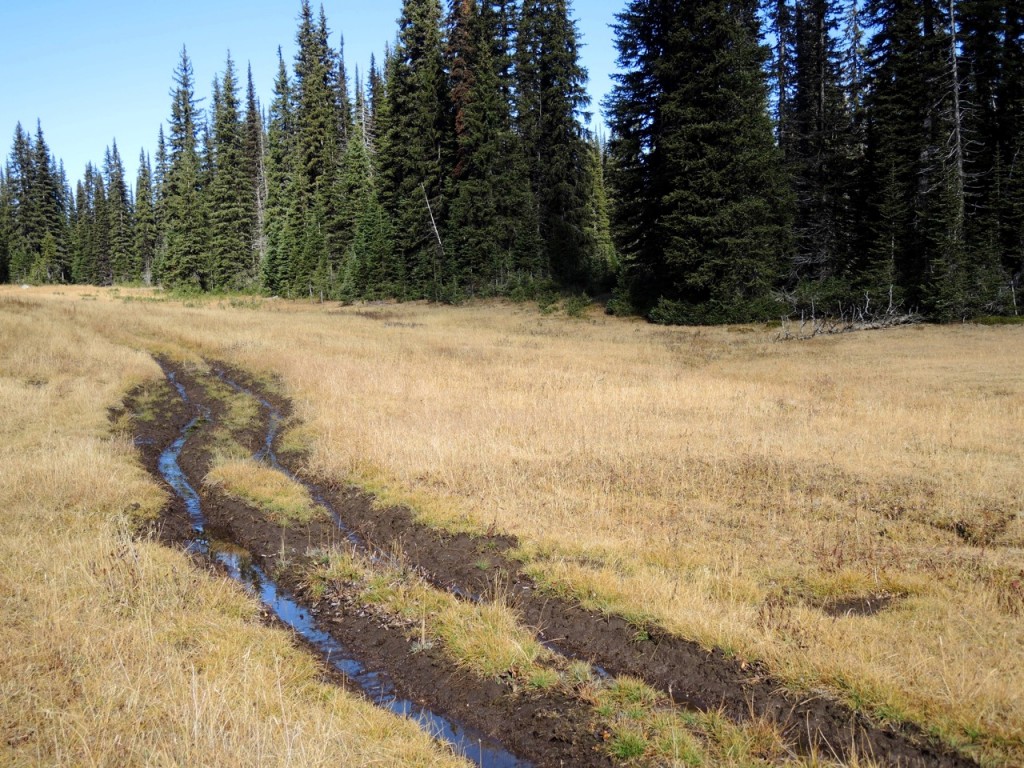 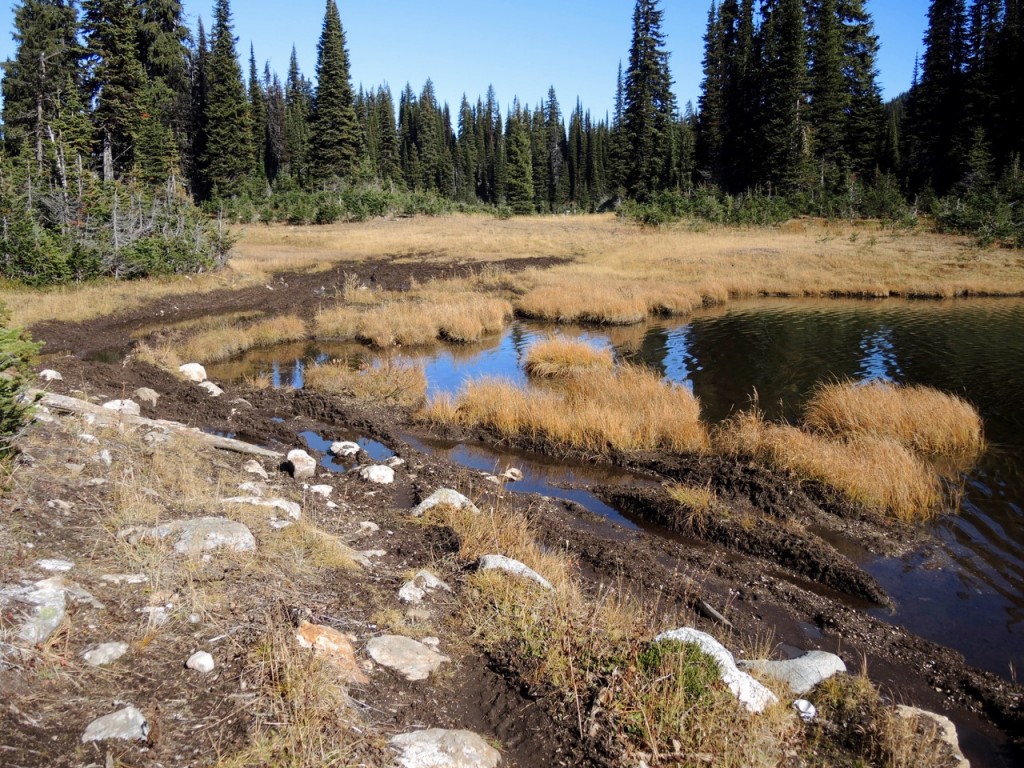