After over ten years of research and writing, my book Everything Shuswap goes into production this week. I had always thought that sourcing the images needed to showcase Shuswap’s amazing geography would be easy compared to the efforts required to produce the text, however while many Shuswap photographers were keen to support the project, many of the needed photos were not available. Consequently I took advantage of some clear days in September to travel around the watershed taking photos and in doing so; my appreciation for our region’s diversity was reinforced and more knowledge was gained. 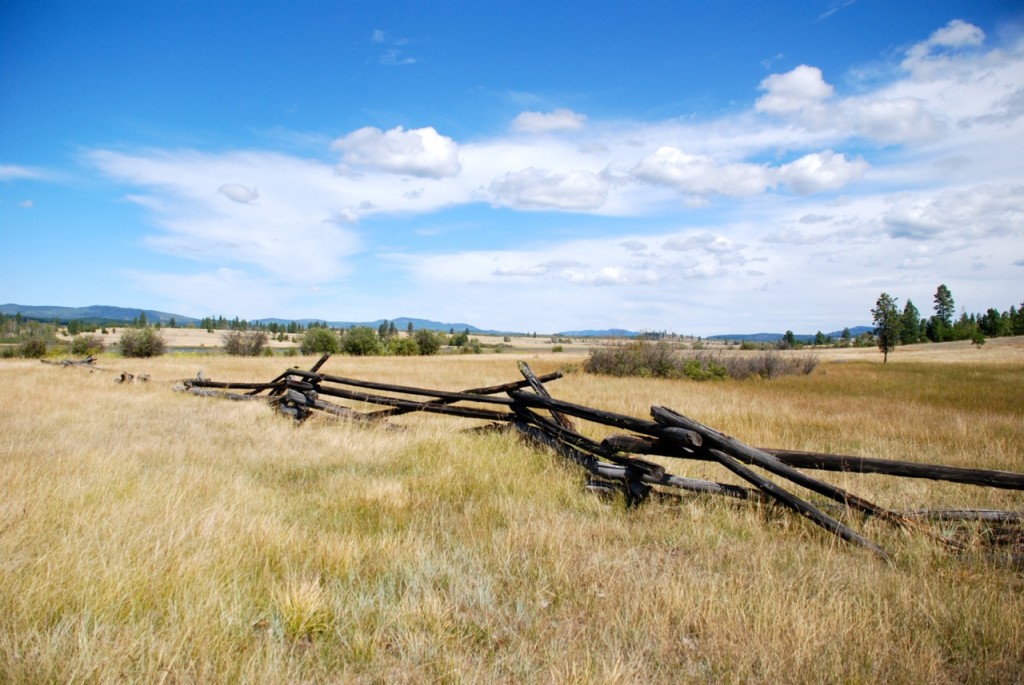 One tour was into Shuswap’s cowboy country with John Vivian as my guide. At Westwold, first known as Grande Prairie, we drove across the valley on private land and hiked to the beginning of the hills to view the small cairn built in 1958 from the fireplace stones that came from the Shuswap’s first European dwelling, a supply cabin along the Brigade Trail. The plaque on the cairn put there by the Westwold Women’s Institute, estimates that the cabin was built sometime between 1811 and 1820. Given that the cairn is located on the north side of the valley next to a spring, it is likely that the trail was located there, rather than where the highway is now. 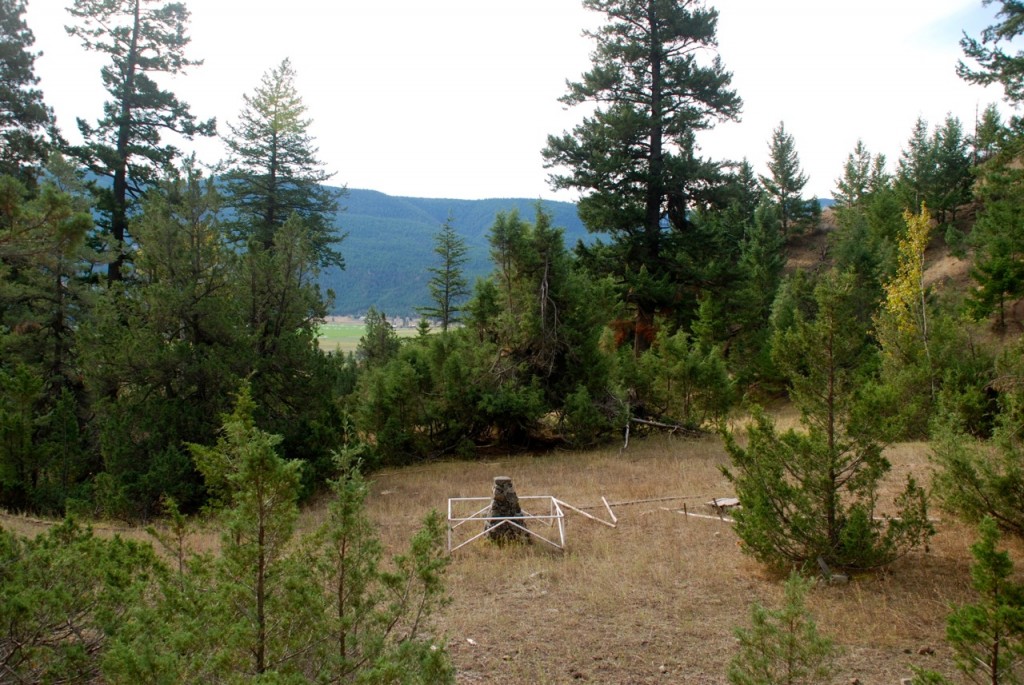 The cairn overlooks the valley

We then drove to the boundary between the Shuswap and the Nicola regions in Douglas Lake Cattle Ranch country, with there are vast grasslands with small lakes and few trees. This is where a peace treaty, known as the Fish Lake Accord was signed between the Sylix people of the Upper Nicola Band and Tk’emlups people of the Secwepemc Nation. There is also a small Upper Nicola Band reserve here adjacent to Salmon Lake. The ditching done by the cattle ranch in the early 1960s to channel the upper Salmon River and thus drain a wetland and convert to a hay field and pasture was clearly visible. 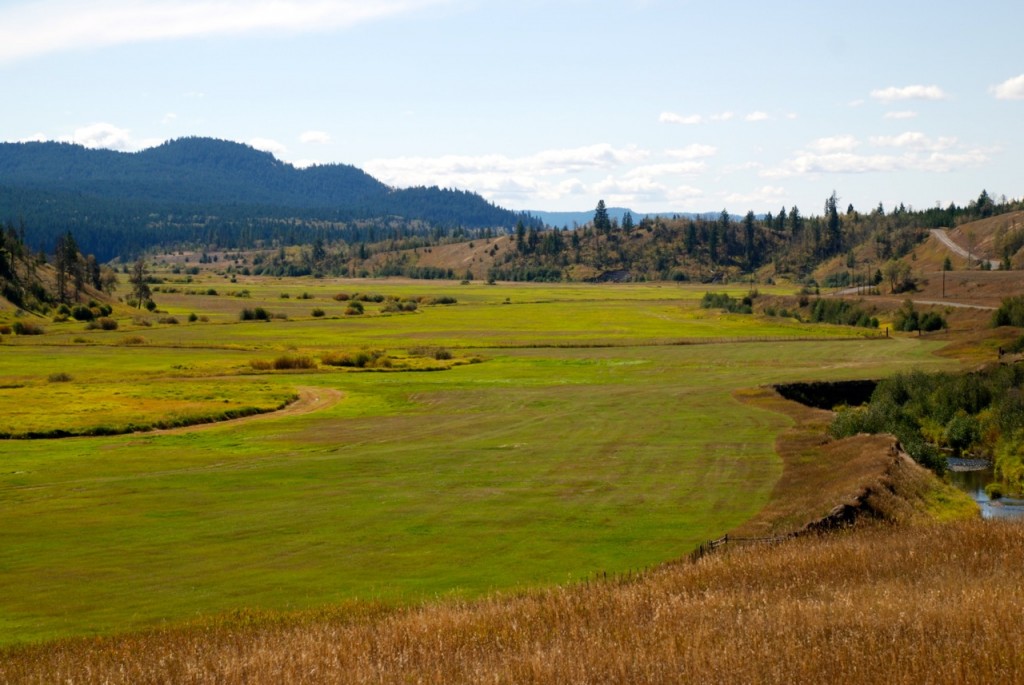 On the way up to the upper Salmon River, we stopped and hiked into Weyman Falls, which had a surprising amount of water considering this year’s dry summer. On our return, we drove through the plateau country, which resembles the Cariboo region with its many small natural meadows and lakes. As we began the descent to the valley we stopped to catch the view of Westwold from the hills to the south, which made the Grande Prairie look not so grand after all. 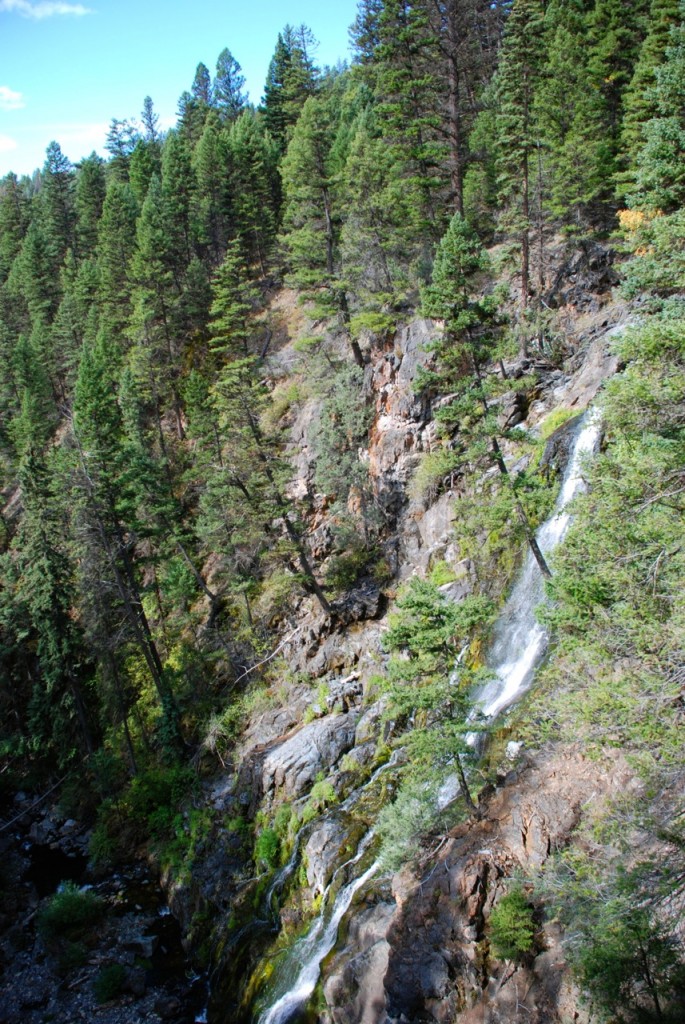 It was another day and another completely different ecosystem, when my wife Kathi and I drove from Three Valley Gap to Mabel Lake and on to Lumby. Our first stop was the campground at Frog Falls, where we hiked into view the falls from the bottom and the top. Interestingly, we found out why there are power poles along this stretch of logging road, as there is an old power generating station at the falls that supplies electricity to the resort at Three Valley Gap. Also impressive along the route were the many ancient giant cedar stumps, with notches cut for the springboards used to support the fallers with their crosscut saws. 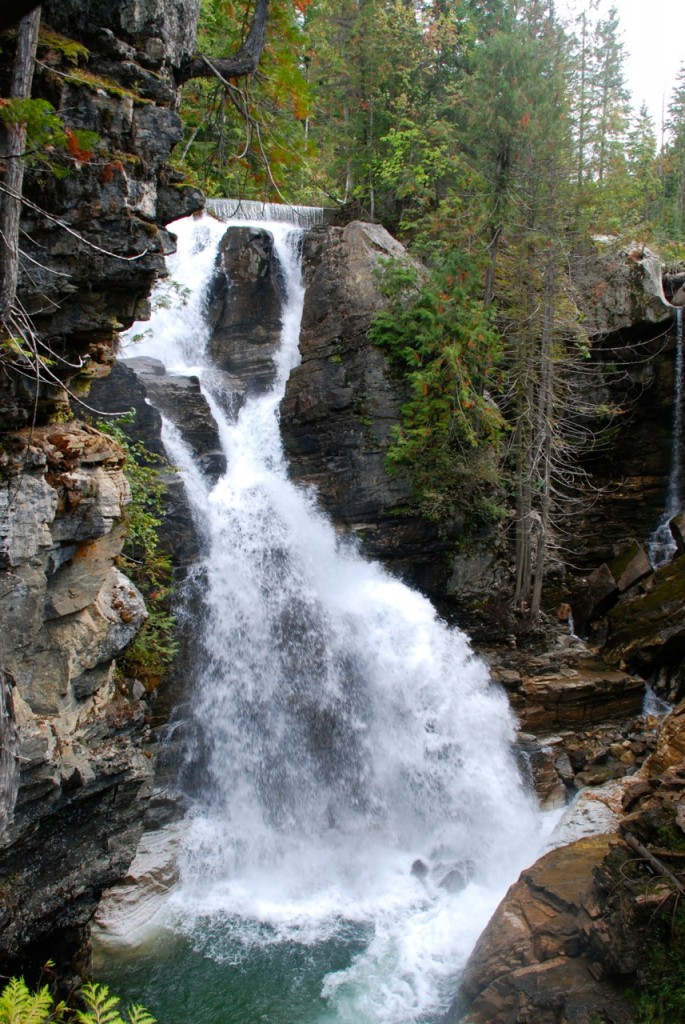 Frog Creek was renamed Wap Creek, a short form of Shuswap used by early settlers, in 1932. After driving into an overgrown road to the creek, we encountered a young couple who often camp there and walk the creek. They explained how they discovered many artifacts from the logging railway that ran parallel to the creek many years ago. After some research, I found out that this railway was built in 1907 to supply timber to the mill at Three Valley Gap and was removed after the valley was logged and the mill burned down. 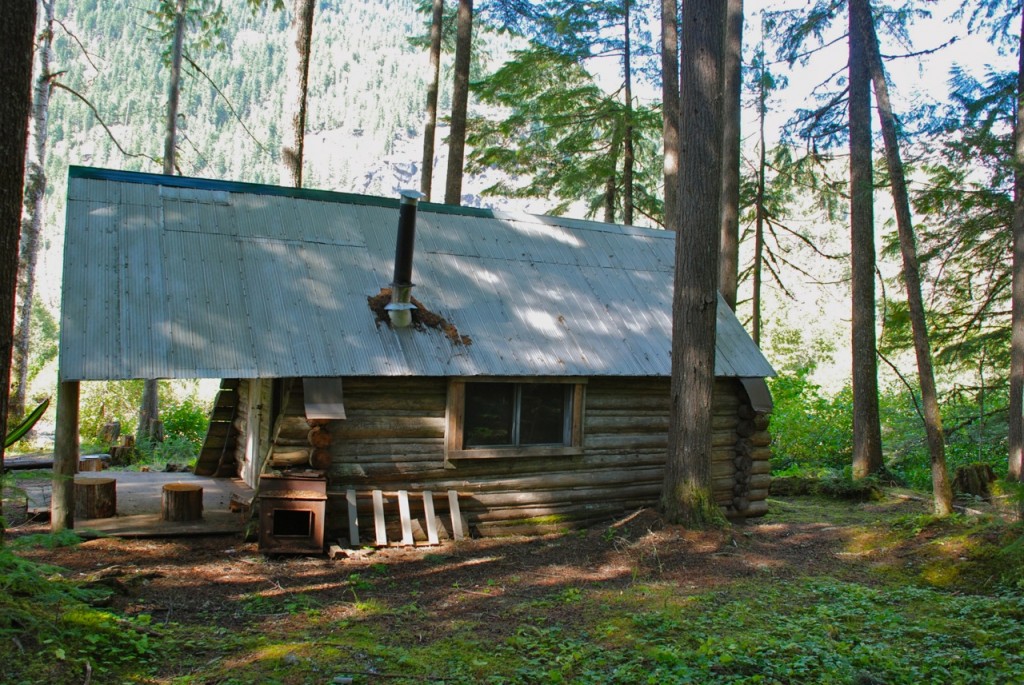 We also drove into a campground in Wap Creek Provincial Park that includes an old log trapper’s cabin that is open for use by the public. The views of the valley along the creek were outstanding here and at the mouth of the creek where it enters Mabel Lake. In addition to the Cottonwood Bay campground at Mabel Lake, we came across other camping sites along the lake where we hope to return one day and pitch a tent. 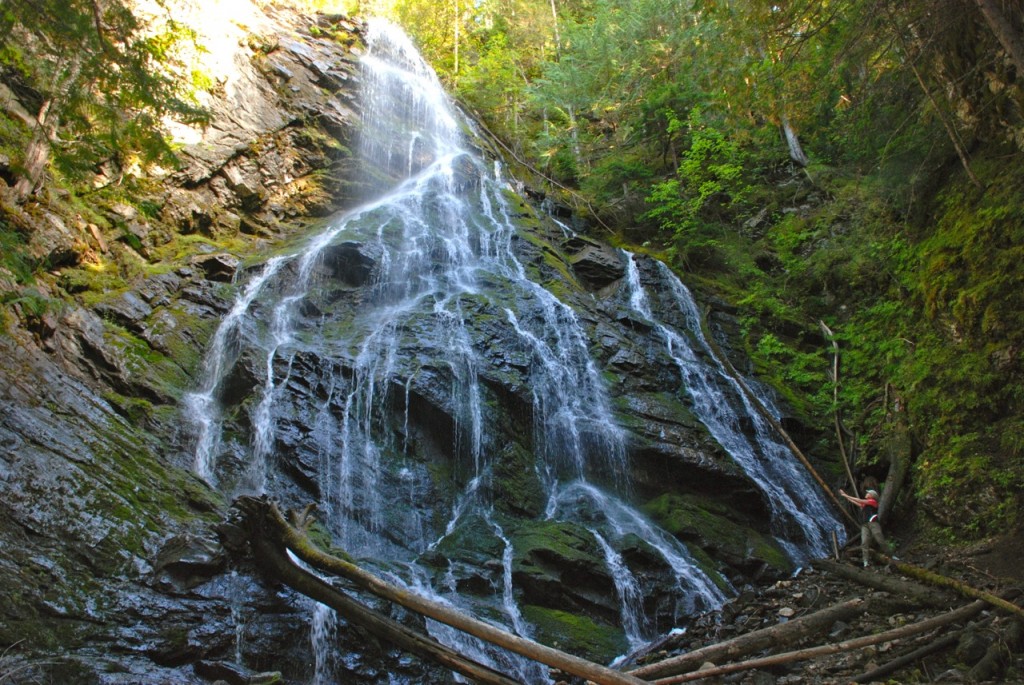 A highlight was finding the short trail to another impressive waterfall, Cascade Falls that spreads out widely on the approximately 30-metre high cliff face. Close by is a beautiful campground on the lake.

Compared to other regions, the Shuswap is blessed with amazing diversity and trying to capture this with a camera is a challenge. It seems that there are very few days in a year when the weather conditions are right for landscape photography, as even on many blue sky days there is haze, which turns the green hillsides grey and obscures the distant views. The drive along Wap Creek and Mabel Lake is a joy, with so much to take in, such as views like this in the Wap Creek valley: 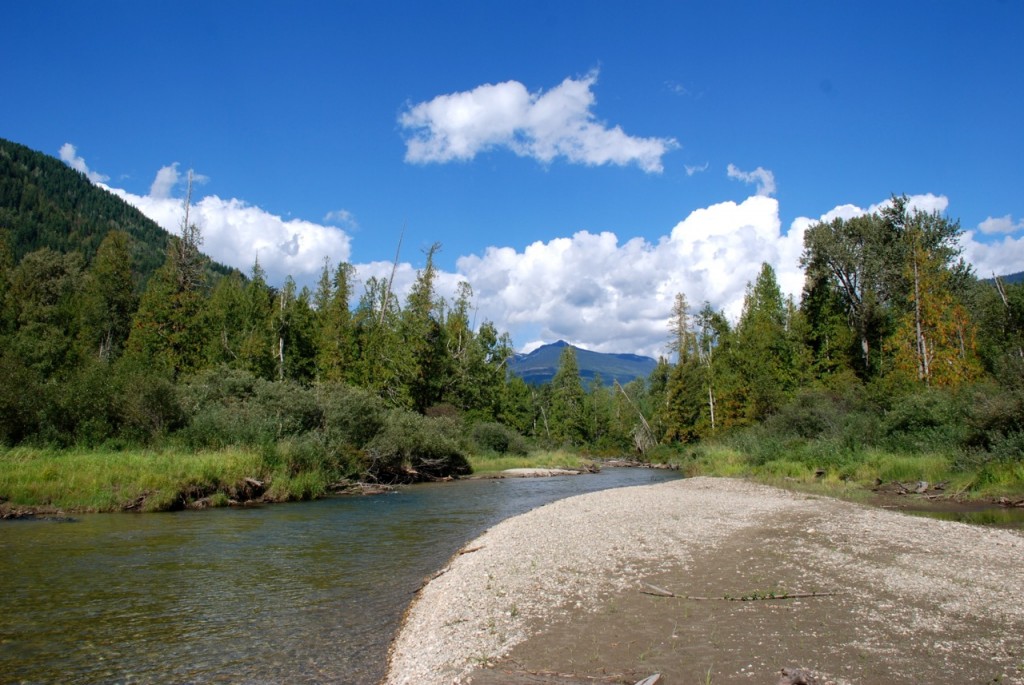 The mouth of Wap Creek at the top of Mabel Lake