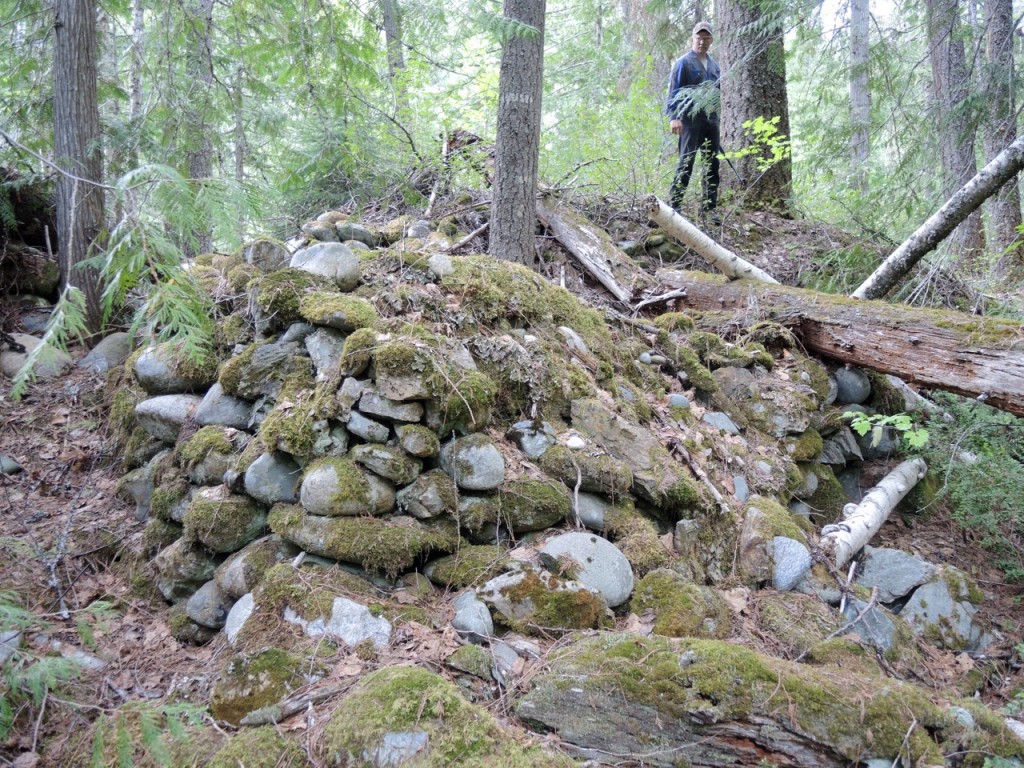 After three exploratory hikes in the Scotch Creek gold country, I look forward to at least another one because there are still more historical sites to document. So far, the remains of four Chinese cabins and more recent cabins have been located, along with many examples of old hand diggings including large piles of rocks, pits and channels. North Shuswap old-timer Larry Speed was my guide for a tour of the area near the forks, where as a youngster he had seen the abandoned placer mining operations that began in the early 1930s. 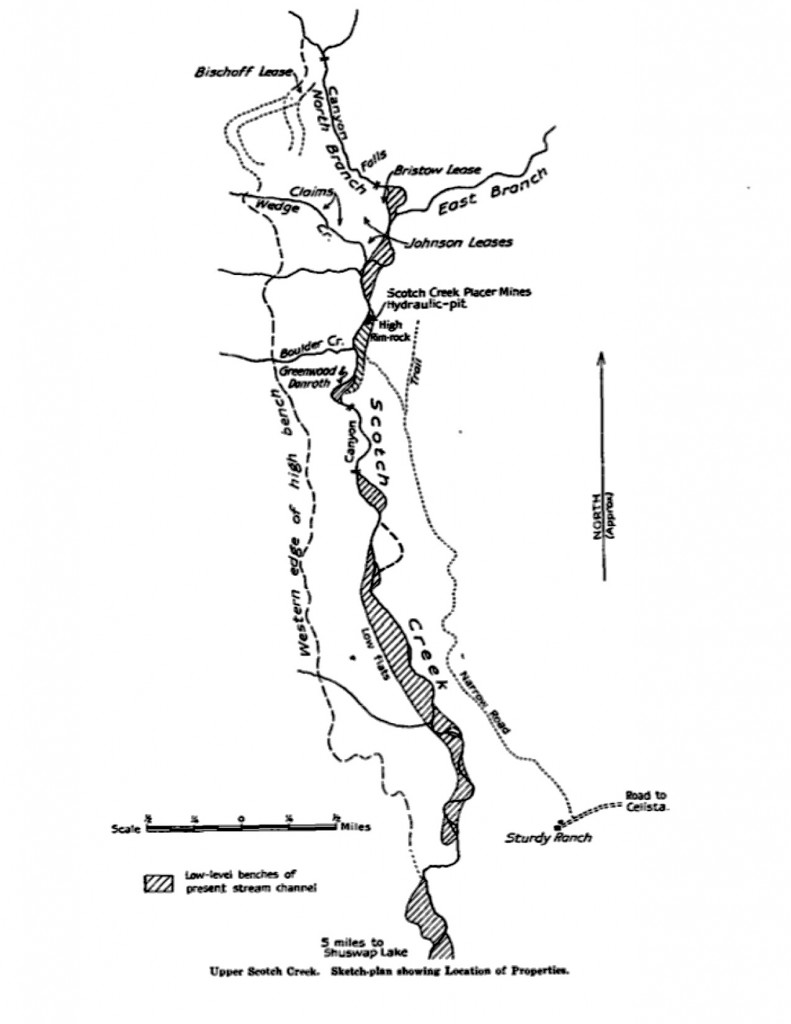 The 1936 Report of the Minister of Mines provides a map and details about 16 active claims and leases in the Scotch Creek valley during the third gold rush. Most of the work was done by hand using wooden flumes or pipes to provide the water needed to move the gravel off the banks and extract the gold with sluice boxes. These boxes were set at a slight angle and the gravel was shoveled in by hand and washed over riffles made of wood or steel that would trap the gold, with the tailings exiting the box at the lower end. 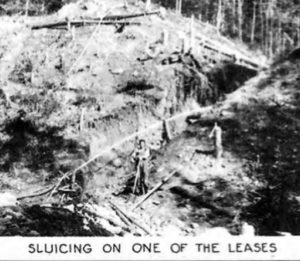 Thankfully, a prospector who has a current claim adjacent to the creek provided a government “property file” that contains a treasure trove of information and photos about the largest project, Scotch Creek Placer Mines Limited. This company was incorporated in 1935 after acquiring most of the remaining area from a half-mile below the forks to the Indian Reserve by the highway. Their camp included a number of cabins, an office and engine room and a large cookhouse. 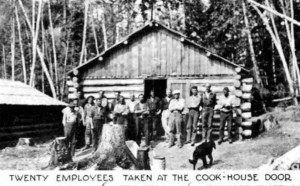 A large hydraulic system was built utilizing 2,000 feet of pipes ranging in size from 12 inches to 8 inches to send water from Garnet Creek at high pressure to wash the gravel off the bedrock on the hillsides. According to another local old-timer, there was too much water pressure for the sluicing and some gold was lost in the tailings that ended up in the creek. 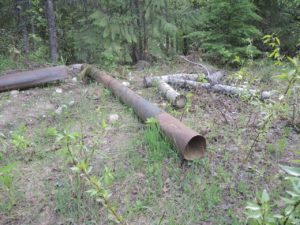 In addition, the company had a 1-yard wood-burning dragline shovel with a 60-foot boom to excavate material in the creek bed. Larry remembers seeing the remains of this equipment partially buried in the creek.

A few pipes remain at the site 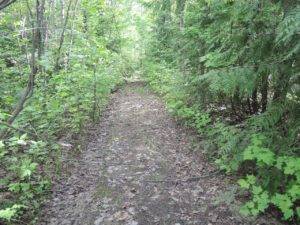 To provide better access, the company built a wagon road to the forks along the route of an older trail that extended from the end of the Meadow Creek Valley above Celista. As well, a warehouse for the placer operation was constructed on crown land just beyond the original Sturdy Ranch. As the logging road on the west side of Scotch Creek had not been built yet, this road was the only way to bring in equipment and supplies. 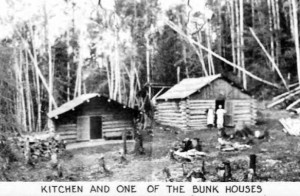 In the 1935 placer mine prospectus, the company geologist claimed, “the ancient, gold-bearing gravels on the Pre-Cambrian bedrock are exceedingly rich in rough, coarse gold and good, gritty gold can be found in any of the gravels on your property.” He also went on to claim that the site was free of glacial action and the only one like it in Canada. A total of 150,000 shares were issued at a cost of $1 per share to cover the costs of the operations and purchasing the existing leases. 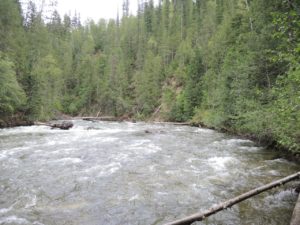 Also contained in the property file are letters and reports from a senior mining engineer and John Walker, the Provincial Mineralogist. All of the assertions in the prospectus were thoroughly disputed, “it is very doubtful if the rocks in that area are Pre-Cambrian and it is certainly untrue that they have not been denuded of their rich gold-bearing gravels, if any, by later glacial action” and “When the Chinese give up work on a stream it is doubtful if much pay-dirt remains for the small-scale operator.” The engineer also revealed that the old leases had not been purchased, but only optioned with monthly payments. 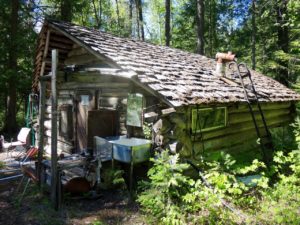 Given that their rationale for large-scale placer mining was seriously overstated and their techniques were flawed, it is no surprise that the company was not successful and was gone in just three years. Yet the small-scale miners continued to have limited success and some carried on operating in the valley until 1942, when the government suspended all gold mining for the war effort. According to the 1950 provincial Placer Mining Bulletin, a total of 480 ounces of gold worth $14,193 was recovered between 1931 and 1945. No doubt, there were some unhappy shareholders who lost money in what was just one more Shuswap mining scheme failure.

North Shuswap’s gold mining heritage could one day be a theme for tourism with the trails and historical sites a destination for adventure seekers. The results of my investigations and research will soon be on display as part of an exhibit in the new museum space at the R.J. Haney Heritage Village and Museum, that will include a large map, photos, an old gold pan, and Chinese artifacts recovered from the site of the cabin remains, as well as a rocker (small sluice box) and other photos and artifacts assembled by Deborah Chapman, the museum curator. 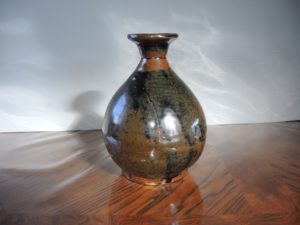 The grandson of one of North Shuswap’s pioneers, Ralph Bischoff, was my guide on the first expedition into the area. Ralph lives in the old family homestead in Meadow Creek. He had hiked along the creek many times as a kid fishing with his father. We found many examples of the diggings, which were neat piles of rocks, excavations under boulders and ditches used to channel water and holes. The gold tended to accumulate in the gravel under the rocks and boulders, which the Chinese miners would then dig up and pan to find the gold. 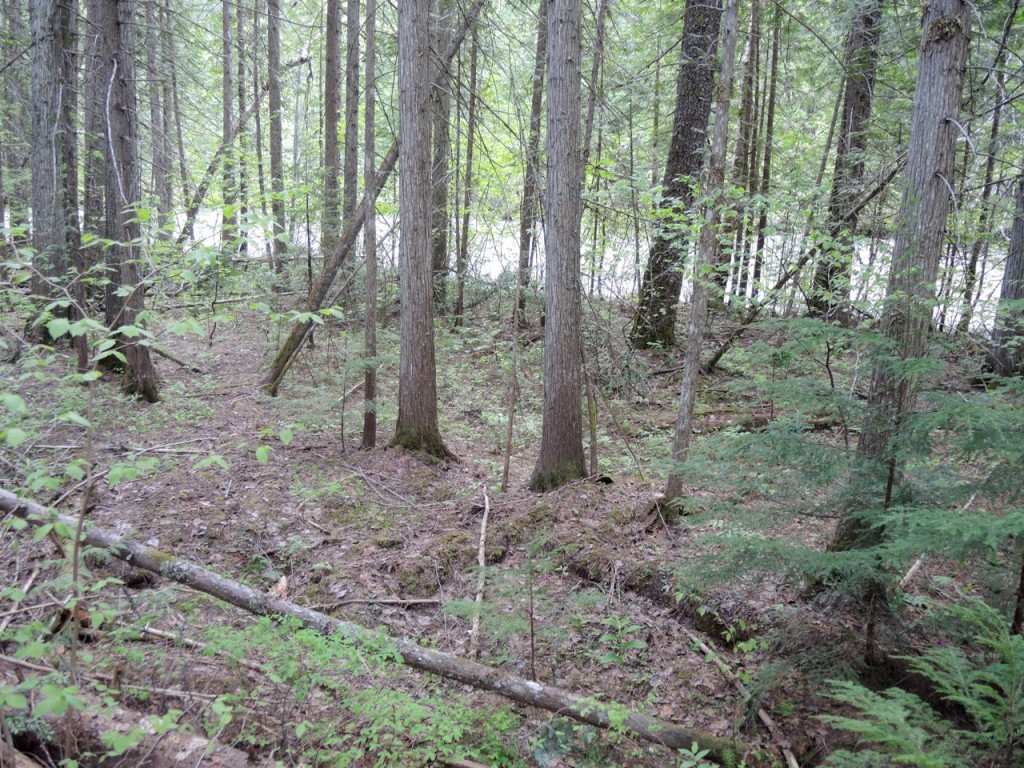 The remains of one old cabin alongside Scotch Creek

We found just one old cabin remains, which was just the outline of the structure, as the logs had rotted into the ground long ago. The hike was extremely difficult, as we descended into the area on a 90 degree slope and had to exit up another steep slope to avoid the area known as dark canyon.

My second visit in was with old timer Larry Speed who moved to Meadow Creek as a young boy in the late 1940s. He also had visited the area many times as a youngster and young man and remembers some of the men who were still prospecting in those days. We parked at the forks near the bridge and walked along the creek where he pointed out where the old placer mining operation was, including the site of the cable car installed by Bob Bristow at his claim. 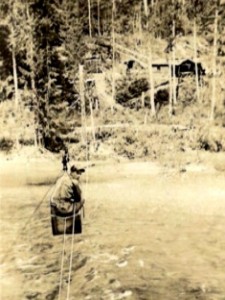 We also found the remains of two old Chinese cabins. 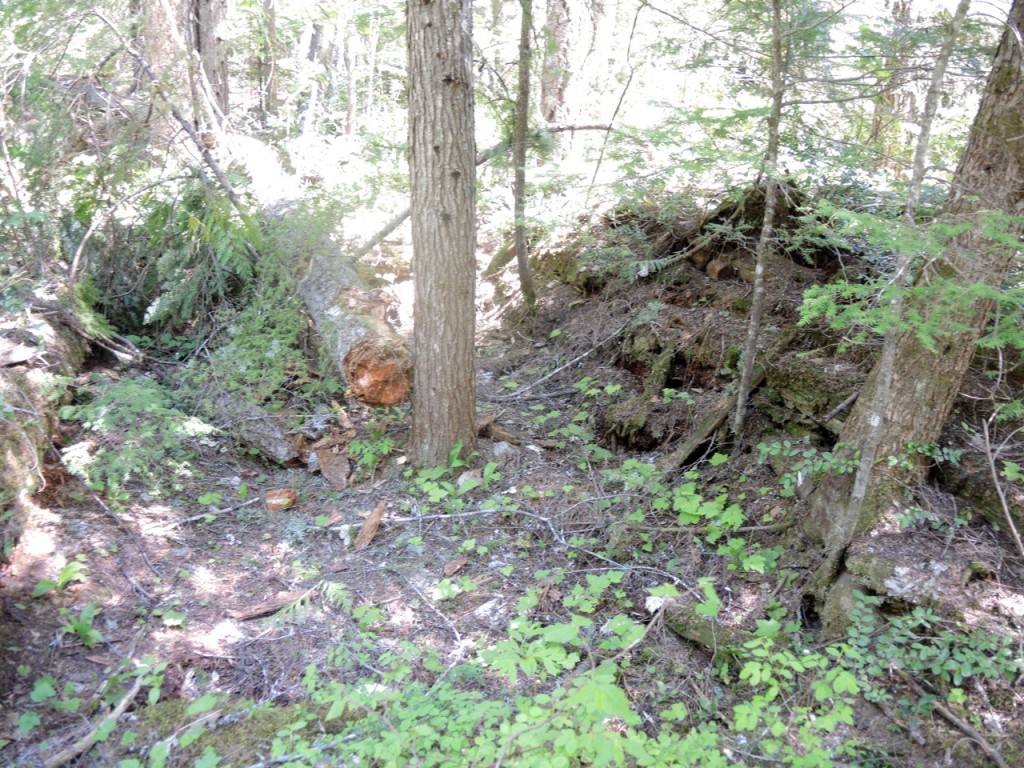 Some of the logs were still visible in the remains of this old cabin.

My next column will focus on my third visit to the area and some of the prospector characters who lived in cabins along the creek in the 1930s and 1940s.