Stories of those who were lured by gold

Home » Stories of those who were lured by gold 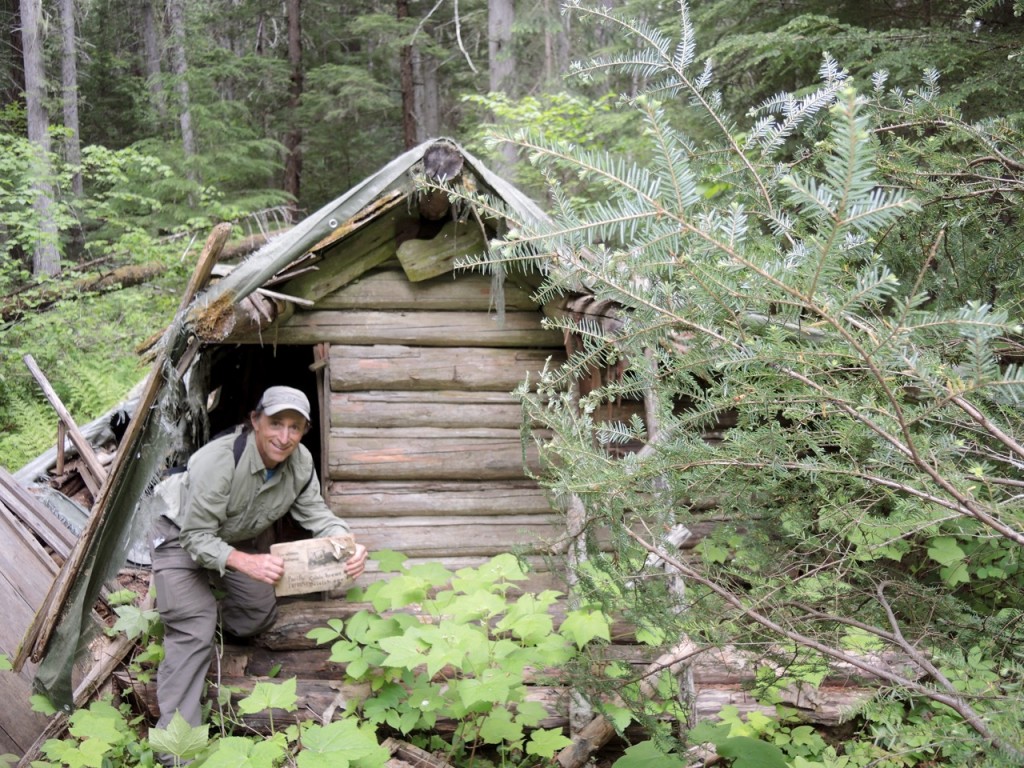 While little is known about those who panned for gold in Scotch Creek during the first and second gold rushes, there are still old-timers around who remember the solitary men who lived in crude cabins and barely made wages in their quest for the motherlode. Except for the walk on the flat ground just south of the forks, searching for their cabins has been challenging, due to the steep ground, fallen trees and thick bush. It is no doubt that these gold miners were a tough breed who could endure the hardships, the loneliness, and strenuous work.

The most famous miners of them all was William Henstridge, who was also known as Billy the Trapper and was one of the first to homestead in what is now Sorrento. He came to B.C. to prospect for gold after travelling across Canada with a Red River cart and oxen. On his way he took part in the last buffalo hunt in Saskatchewan, was a scout for the Northwest Mounted Police, and he fought in the Riel Rebellion for both sides, depending on which district he was in. 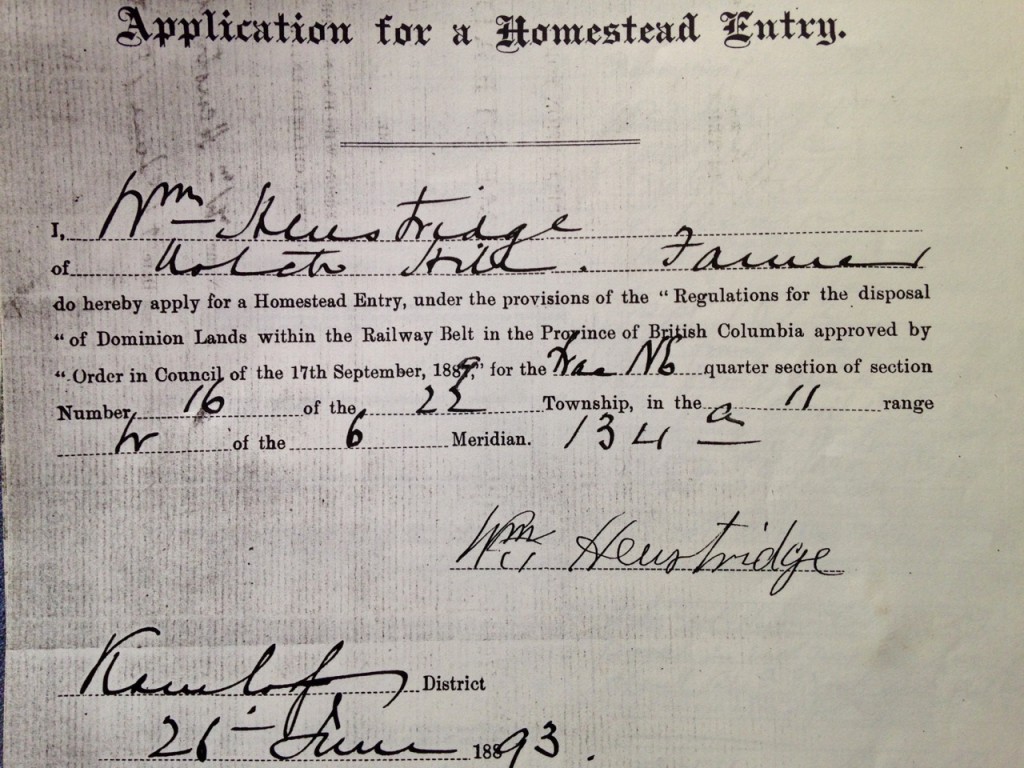 After travelling throughout the province, in 1892 Billy decided to homestead along the south shore of Shuswap Lake next to Newsome Creek. He built a cabin, cleared some land, laid out a trap line, raised bees, and built a blacksmith shop. Soon trappers from throughout the region would bring their furs to Billy’s cabin, from where they would be transported to Notch Hill for shipment on the trains. The sternwheelers also landed at Billy’s beach and thus it became known as Trapper’s Landing. 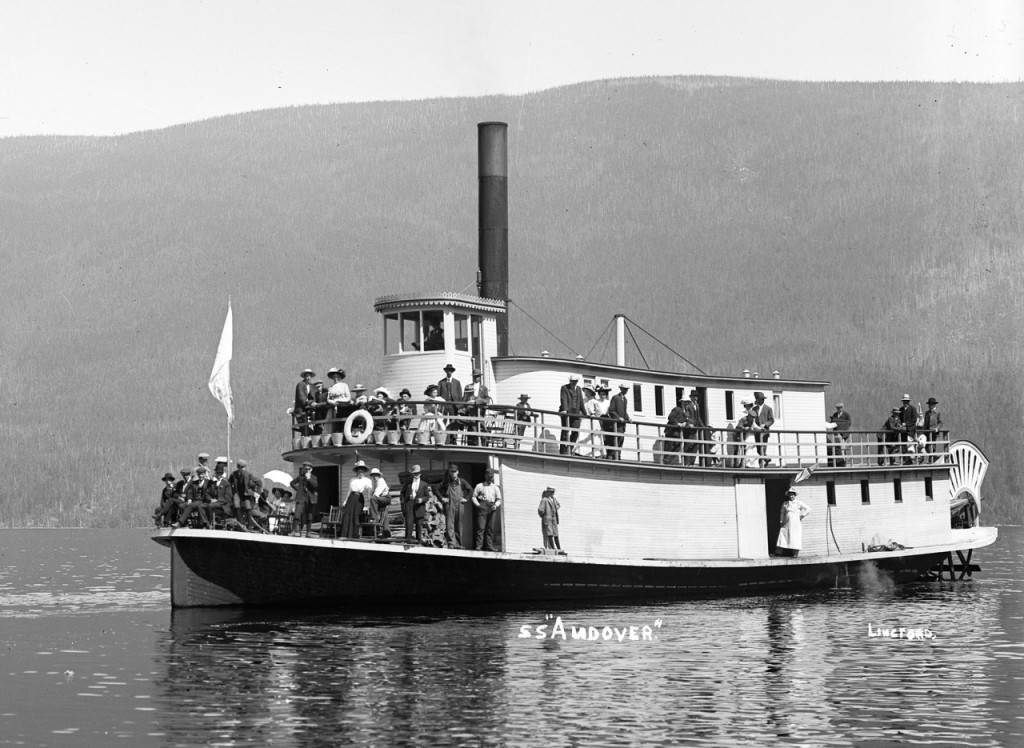 In 1906, John and Florence Reedman’s second son was born in Billy’s blacksmith shop, which had become the friendly stopping off place for most of the settlers and prospectors on the lake. Billy had trap lines at Adams Lake where he had a cabin and all the way up to Tum Tum Lake. Given that he preferred solitude, he moved to Adams Lake and when that area became too busy, he moved up to the Adams Plateau, where the alpine meadow, Henstridge Prairie, was named after him.

It was likely around 1930, at the age of 72 that Billy moved to his cabin at Scotch Creek to work on his claim below the forks just to the north of dark canyon. Old-timer William Daline remembers going fishing at the creek as a youngster and Billy invited him in for lunch at his cabin. He recalls how Billy was a generous man, “who would give you the shirt off his back” and that he once loaned his violin to Dave Garland, who kept it for many years. 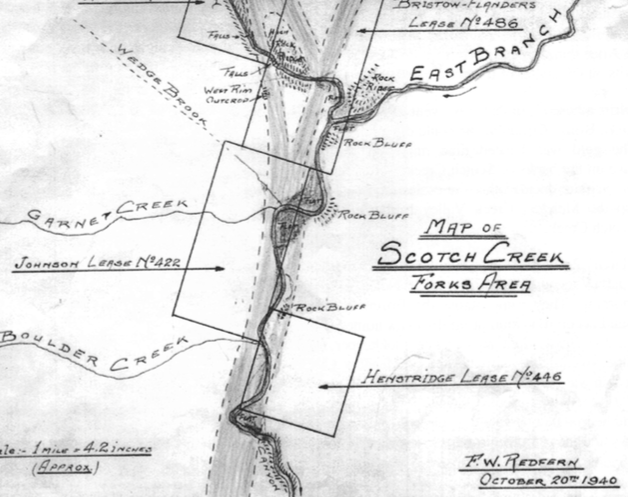 Ralph Bischoff grew up hearing many tales about Billy, who was renown as a one-eyed sharpshooter and could hit the bull’s eye at l00 yards. His favourite story was first told by Ralph Richards who after returning from the Second World War encountered Billy on his well-worn trail between the Adams Plateau and Scotch Creek and noticed how Billy was missing his glass eye. When asked what had happened to it, Billy responded that he had lost it on the trail. A week or two later, he saw Billy again and his glass eye was back in the socket. When asked where he had found it, Billy replied, “I was walking along and there it was, staring right back up at me!”

One Christmas, Billy and his good friend and “partner” George Bourgeois (or Busane) were to have dinner at the Sturdy Ranch at the end of Meadow Creek Road. When George did not show up, they headed down the trail and found him dead from exposure after surviving a premature mine explosion. The constable, who investigated with Billy, reported afterwards, “that little guy must be nearly eighty, but he just walked the legs right off me!” Billy lived to the ripe old age of 97, and spent his last years in a cabin near the Celista Hall. 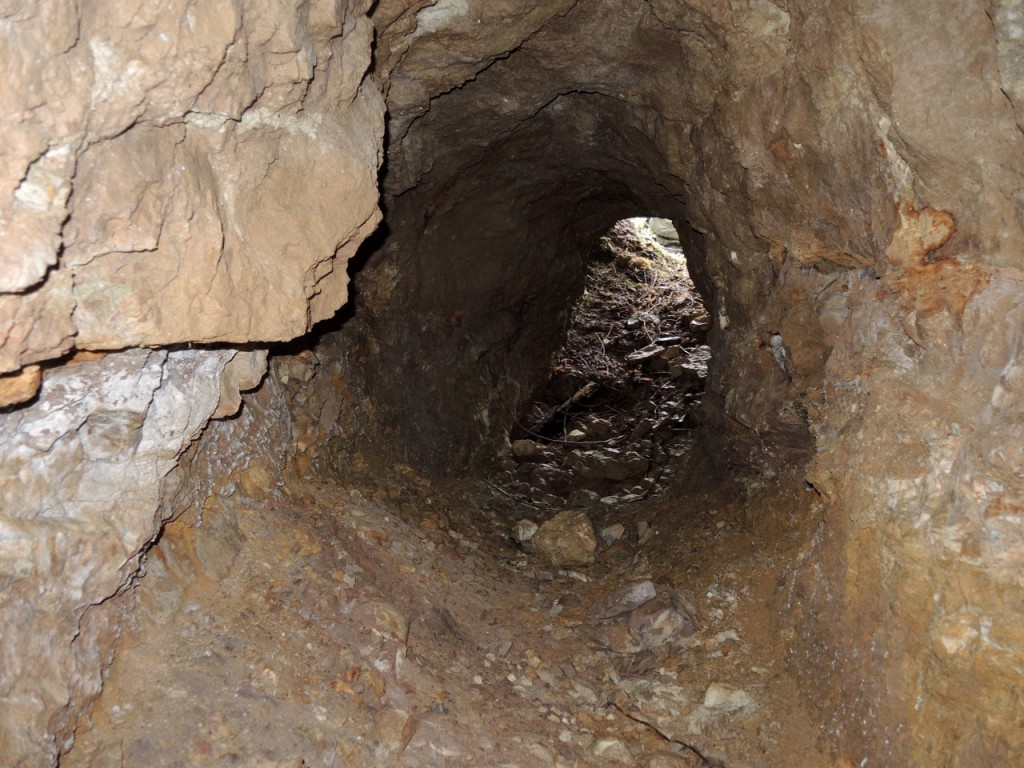 The tunnel is about 10 metres long

George Bourgeois may have been the miner who blasted out the tunnel just upstream from George Hood’s cabin. Hood was a reclusive First World War veteran, who chose to live in isolation, where he may have also panned for gold. He was known to always wear a black hat and jacket and was a spiritualist, who used a crystal ball. Apparently, he first lived in a hole in the ground and later moved into the cabin that is still standing with a caved-in roof next to Scotch Creek. 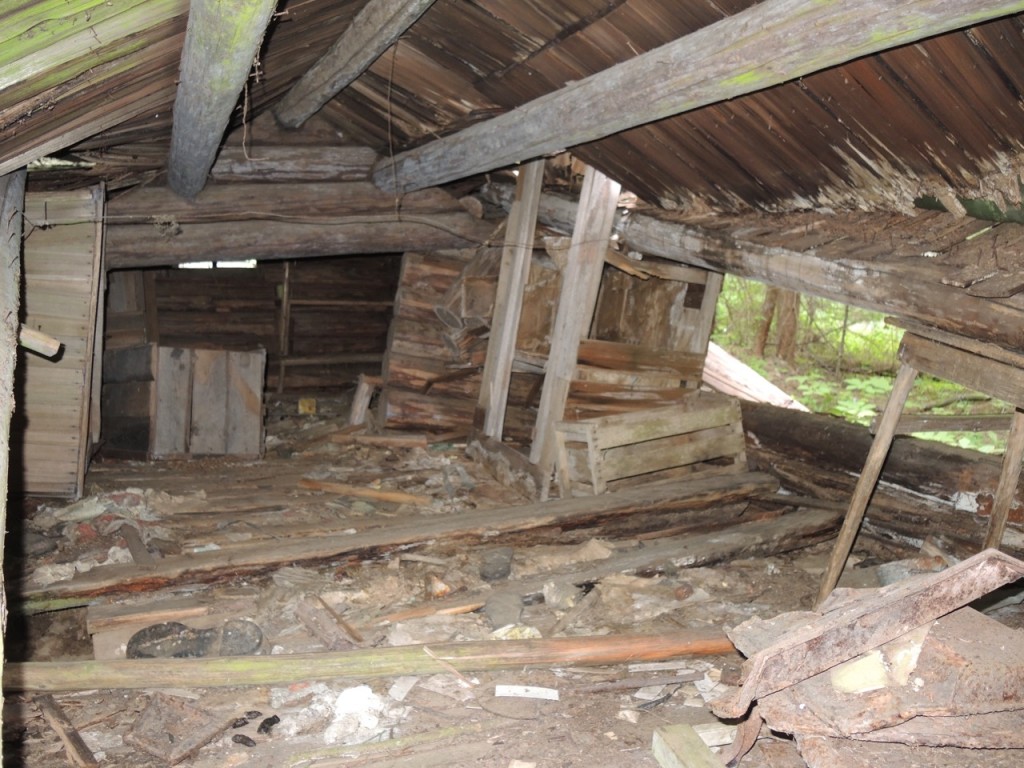 We made two attempt to find Billy’s cabin, first following the directions of Larry Sped and then of Ralph Bischoff without success. On the first hike, we explored the area just to the north of Meadow Creek. We found another Chinese cabin with the remains of two corners and a stone hearth. On the return, we followed a hand-dug water trough that brought water from the creek to the diggings. We also found the end of the water channel that brought water south to where George Hood’s cabin is still standing. The terrain is extremely challenging to hike, given the steep ground and the maze of downed trees and thick bush.

I am planning one more column about the lives of some other miners from the 1930s and 1940s. Stay tuned! 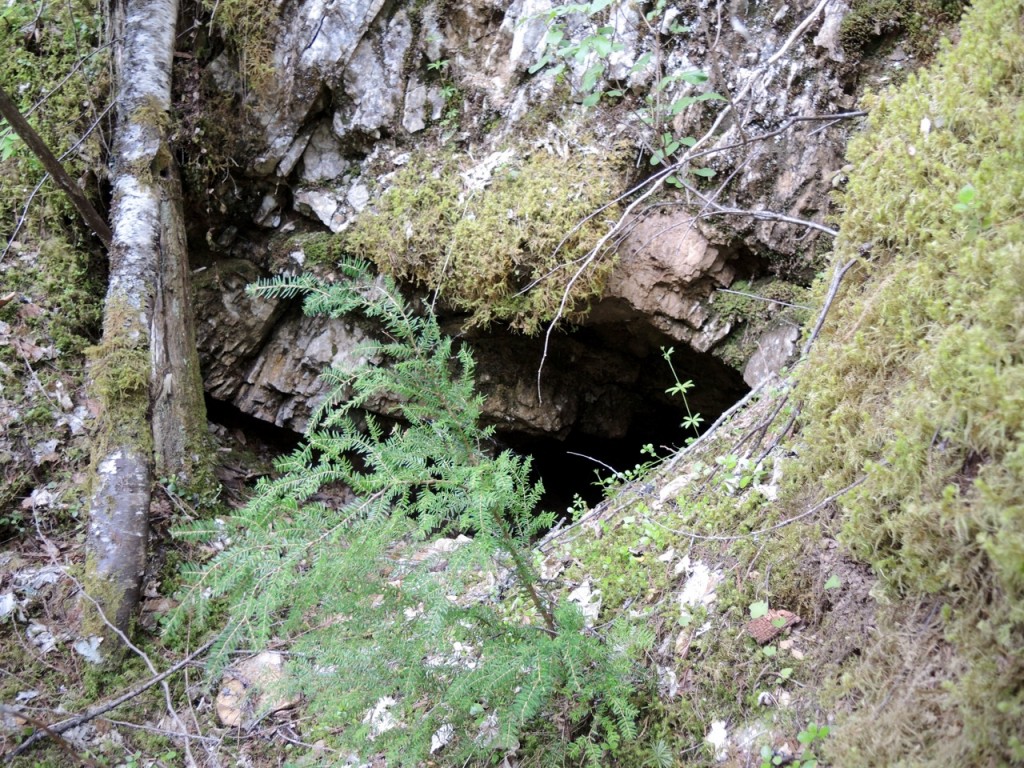 The entrance to the tunnel 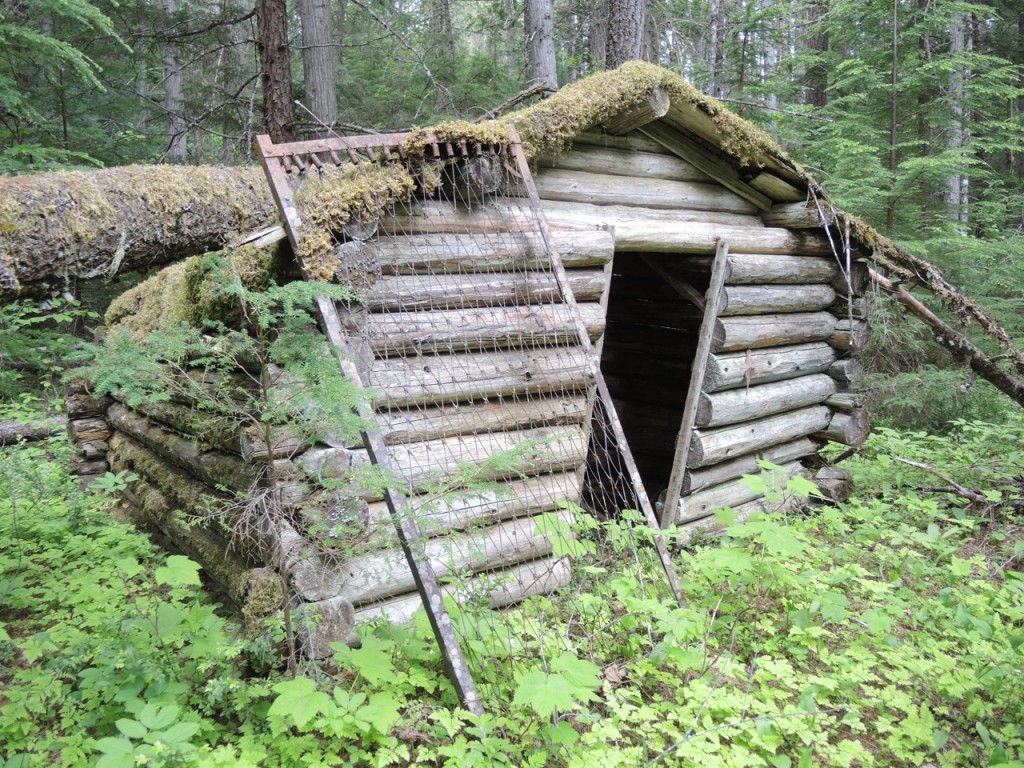 another cabin or shed behind George Hood’s cabin