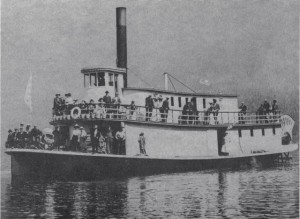 The steamer Andover on Shuswap Lake, circa 1910

Before there were roads and automobiles, sternwheeler steamships served a vital role in the development of the Shuswap region. From 1866 until 1916, 19 stern and side-wheeled steamships were built to provide transportation between, Savona, the North Thompson, the Shuswap Lakes and as far south as Fortune’s Landing (Enderby). 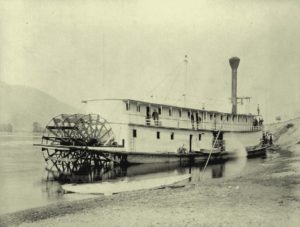 S.S. Peerless used in constructing CP Railway – Little Shuswap Lake. The Peerless was launched by the Kamloops Steam Navigation Company in November of 1881. The sternwheeler was 133 feet long, had engines that allowed a speed of 18 knots and required only 18 inches of water.  Onderdonk album photo courtesy of the B.C. Archives and the Kamloops Art Gallery

The ships ranged in size from the massive 133-foot, 307-ton Peerless built in 1881 with the engine salvaged from the Shuswap’s first steamship, the Marten to the 33-foot, 15-ton Red Star built in 1887.  Shuswap steamships hauled supplies to the goldfields; carried men, equipment, ties, and rails for the construction of the railroads; hauled firewood, farm produce, and building supplies for the settlers; serviced the logging industry; and carried passengers. 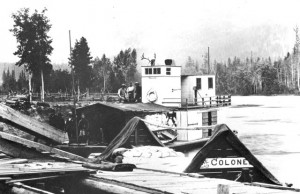 A number of boats were built in the late 1800s that provided service to Eagle Pass Landing and Spallumcheen (Shuswap) River settlements. The small Kamloops I was built in 1872 and its most famous passenger was the region’s first white woman settler, Mrs A.L. Fortune.

The 80-foot sidewheeler Spallumcheen was built in 1878 and because its threshing machine engine was so noisy and its name was difficult to pronounce she was known as Noisy Piggy. Also built in 1878, the 86-foot sidewheeler Lady Dufferin plied the waters until a fire in 1886, after which she was used as a tugboat until 1892. 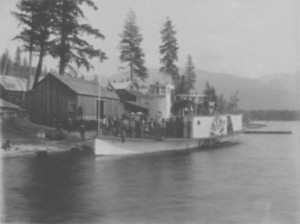 Two other boats were built to ship lumber and flour from the mills along the Shuswap River mills as well as passengers and freight, the 33-foot Red Star 1 built in Victoria and the 57-foot Red Star II, which was built in Enderby.  Time schedules were difficult to maintain, as the ships had to stop frequently for loads of cordwood and during low water, the ships would often get stuck on sand bars. 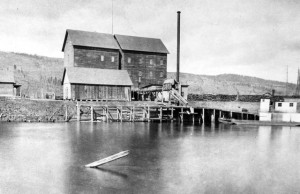 From 1880 until 1906, sawmills in Kamloops and Kault (near Tappen) had virtual control of the Shuswap Lake bench lands through the timber berths that they held. These companies built most of the steamships to transport the loggers, horse teams and equipment to the logging sites and to tow the booms of logs to the mills. Logging was often done in the winter with the snow facilitating the hauling of the timber. Logs piled up on decks along the shorelines waiting to be rolled into the water and towed away in the spring. 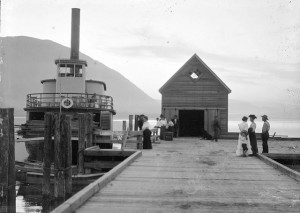 Andover at the Salmon Arm wharf, circa 1909-1914, photo by Rex Lingford and courtesy of Salmon Arm Museum and Archives at the RJ Haney Heritage Village

The two 90-foot sister ships, the C.R. Lamb and the Andover were built for the Arrow Lakes Lumber Company in 1907 and 1908 for approximately $23,000 each. These vessels provided the greatest service to North and South Shuswap settlers. At first, the C.R. Lamb was the logging ship and the Andover provided mail, freight and passenger service thanks to a $1500 a month government subsidy. The government also assisted each community in the building of a wharf for both the steamships and private boats.

Schedules and freight rates were published in the 1913 Chase Tribune. There were four classes of freight, with the fourth; grain, vegetables and building supplies the least expensive to ship and livestock and farm implements the most expensive. Passengers were charged four cents a mile, which meant a trip from Celista to Kamloops was $2.28 per person and shipping a box of apples would have cost 90 cents. 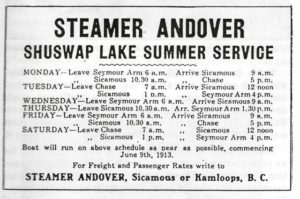 Sternwheelers were constructed with a shallow draft to avoid running aground on sandbars and to enable them to tie up on beaches. Sorrento pioneer Ted Coubeaux once recalled how these boats were handier than the trains, “If we had goods to ship we would simply wave a flag and Captain Ward would pull up to shore to load them up. He would even take boxes of apples and sacks of potatoes and trade them for flour and sugar. All of the supplies for our new house came by steamboat.”

By 1913, despite the excellent service and government help, the steamships became uneconomical and in 1915 when many men left to fight in World War I the service was discontinued. The Andover was brought back into service in 1919 that included summer social outings with live bands, but by 1930 the combination of better roads and the economic depression brought the steamship service nearly to an end. 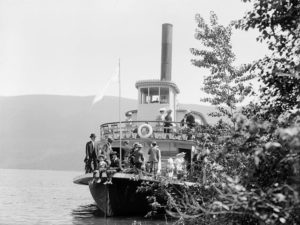 A cruise on the Andover, circa 1909-1914, photo by Rex Lingford and courtesy of Salmon Arm Museum and Archives at the RJ Haney Heritage Village

In 1932, Billy Louie purchased the C.R. Lamb and ran it for six years. He had to petition the government to install a lift span on the Pritchard Bridge so he could provide service between Kamloops and Shuswap Lake. A dance floor was added to attract passengers for his moonlight cruises. But in 1938, the dilapidated ship was beached in Kamloops and the sternwheeler era was over. 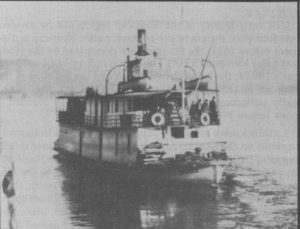 A nearly complete list of the steamships that once plied the Shuswap:

The Distributer I, sternwheeler built in 1884 and used to construct the CPR 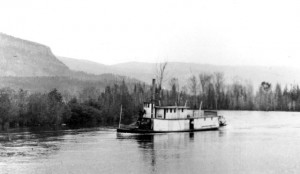 The Thompson, built in Salmon Arm in 1895 for passengers and freight but then used for towing logs, 95 ft. long sternwheeler, gross tonnage of 149.8

The Whitesmith, buit in Sicamous in 1928,  wood-burning steamer with a screw propeller, 78 ft. long, 128 gross tonnage, built for passengers and freight