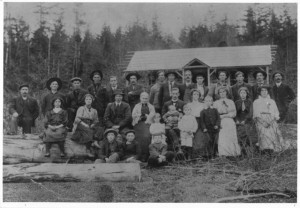 The pattern of early settlement in the Shuswap was influenced by the location of arable land, the modes and challenges of transportation and the early lumber industry, which resulted in a multitude of communities, most of which continue to thrive today. As settlers flooded into the Shuswap between 1896 and 1915, their transportation options anywhere except near the railway were limited as there were no roads.

Anywhere near or on the lakes, goods, produce and people were transported by boats called launches and by sternwheelers from spring to fall, and in the winter, the access was across the ice.  Nine communities sprang up around the lake, each in a pocket of farmable land separated in many cases by steep, rocky ground.

Before there was much presence of the provincial government, groups of settlers would work together to build the roads they needed.  The first road in Salmon Arm that connected the railway station to the Salmon River Valley was begun by the provincial government, but when the allotment of $500 was used up, settlers finished the road with corduroy logs. There was just a rough trail from Notch Hill for the Blind Bay settlers to use, so one of their first tasks was to build a wagon road.

On the North Shuswap, five hamlets sprang up from Lee Creek east to Anglemont and in Seymour Arm, agricultural lots were sold with promises of grand orchards. The centre was Celista, where there was a store, a post office, and a school and a large hall was built in 1934. On the south shore, Sorrento, Blind Bay and Eagle Bay each developed as distinct communities with stores, schools and halls.

Most of the early Shuswap settlers were English or Scottish. However one rather isolated area, White Lake, was settled by Finnish miners in 1910, who were advised to go there by the land agent in Kamloops.  They were expert woodsmen and thus they built log structures, including saunas, near the lake where they could access water easily. To finance their homesteads, many of the men left to work in mines during the winters.

Along the railway track communities sprang up alongside the stations needed to service the steam engines with fuel and water. Chase, Carlin, Tappen, Taft, and Enderby grew rapidly, as each had large sawmills. Salmon Arm became a regional farming supply centre with access by railway and water.

Amazingly, six communities developed east of Sicamous; Solsqua, Cambie, Malakwa, Craigellachie, Taft and Three Valley Gap alongside the tracks and the Eagle River. One of them, Solsqua, was also primarily a Finnish farming settlement.

While communities adjacent to Shuswap Lake were just beginning, settlements adjacent to the Shuswap River were progressing rapidly, as this region had the best farmland and was the most accessible.  However, low water in the late summer and fall often made it difficult to ship out the flour milled from the impressive grain harvests and shortly after the CPR was completed, papers were signed to build a railway from Sicamous to the head of Okanagan Lake. Construction of the Shuswap and Okanagan Railway began in 1890 and was completed in 1892, thus providing a further boost to the communities of Grindrod, Mara and Enderby.

Settlement to the east of Enderby was delayed until a logging road was pushed up into the valley in 1908. The small farming communities that developed at Ashton Creek, Hupel, Kingfisher, Trinity Valley and Mabel Lake were also dependent on the labour intensive logging industry. East of Vernon, farming settlement began as early as 1877 in the Shuswap community of Lumby after a road was built to access the mining activity in Cherryville. 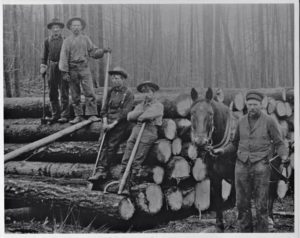 The dates when the first schools were established show how settlement progressed throughout the Shuswap, with the best and most accessible farmland attracting the earliest settlers. The first school was built in 1883 in Shuswap Prairie, just west of Chase, which was followed by Grand Prairie (Westwold) in 1888, Fortunes Landing (Enderby) in 1889, Salmon Arm in 1891, Lumby in 1893, Mara in 1896, Notch Hill in 1897, Kault (near Tappen) in 1899, Canoe Creek in 1901, Silver Creek in 1902, Carlin and Hilton (near Cherryville) in 1909, and in 1910, schools opened in the North Shuswap, Sicamous and Seymour Arm.

The major wave of early settlement ended in 1915, just after the First World War began. Many settlers enlisted and some never returned. Out of the approximately 41 pioneer communities that at one time had schools and in many cases, halls, stores and post offices; 31 still exist in one form or another and thus help define the rural community character of the Shuswap.

Shuswap’s many rural communities continue to thrive a century after they were originally established thanks to strong community spirit and in many cases, a history of cooperation and collaboration.  In some cases, the heirs of the original settlers continue to live in the communities that their grandparents created and amazingly, some of the original community homes and halls still exist and remain in use today.

Here is the list of the original 41 Shuswap communities: