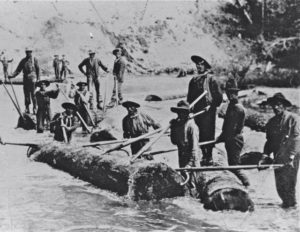 Despite the obstacles that many settlers encountered in gaining title to their homesteads due to the rights held by timber companies, the success of settlement in the Shuswap was due in large part to the contributions to the economy by the forest industry. From when some of the first trees were felled by Francis Anstey in 1878 until World War II, there were four eras of forestry beginning with some timber cutting for the Shuswap Mill in Kamloops; a few mills supplying lumber, timber and ties for building and maintaining the railway and for local construction; demand for lumber in the Prairies giving rise to high volume sawmills in strategic locations, many owned by large American companies; and an industry focused on poles and ties due to the lower demand for lumber.

Shuswap Lake’s Anstey Arm was named after Francis Anstey by George Mercer Dawson in 1888. Born in England in 1830, Anstey was a legend in his time, a 6 foot 6 inch tall, powerful man who often mentioned he was a descendent of the Black Prince, the son of King Edward III. He likely came to British Columbia in the 1850s and helped build the last Hudson’s Bay Fort in Kamloops in the 1860s. In 1880 he pre-empted 320 acres at the head of the arm named after him, where he logged and cut shakes and shingles that were rafted on to Kamloops. 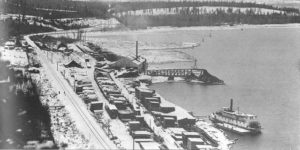 The first major sawmill in the Shuswap was built by the Genelle brothers in 1886 at Tappen Siding adjacent to a convenient beaver pond close to the railway and it supplied ties and timbers to the railway as well as lumber for snowsheds, stations, warehouses and homes for the section men and managers. In 1894, The Genelles relocated the mill to a narrow strip of land alongside the lake they named Kualt after the name for the local Indian settlement.

The Genelles operated a floating logging camp that moved around the lake poaching timber, which was towed in booms to the mill, by the S.S. Thompson sternwheeler. They were also careless in providing the stumpage fees and eventually the government forced them out of business and they sold the mill to the Columbia River Lumber Company in 1898, which ran it until 1910. 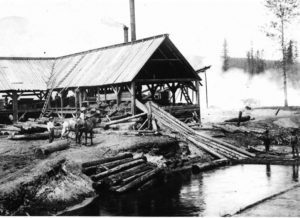 Small portable mills operated in the Salmon Arm area beginning in 1892 to cut the timber cleared from the Salmon River Valley and the nearby benchlands. Brayden and Johnston built a larger permanent mill on the west side of the Salmon River in 1904, which soon became the town’s largest employer. For two decades there was an annual spring river drive when upwards of a hundred men worked from two weeks to a month in the frigid water directing the logs downstream. Not only were the banks of the river damaged, but also many salmon fry were likely killed. 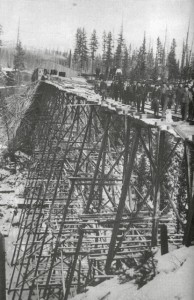 In 1906, the Columbia River Lumber Company relocated its sawmill from Carlin Siding, named after Mike Carlin, a successful lumberman, to White Creek west of Tappen. There were no shortages of calamities for this mill. In 1901, a high trestle built over Broderick Creek to relay ties and lumber to the siding collapsed killing two men. Settlers often used fire to clear the land and one of these fires nearly reached the mill in 1907 and two years later another fire finally destroyed the mill. 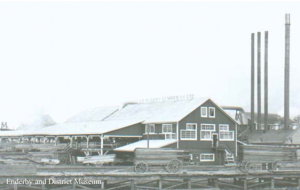 The first large sawmill in Enderby was built along the banks of the Shuswap River in 1894. In 1905 it was sold to the Minnesota-based A.R. Rogers Lumber Company, which operated the mill until 1921 when most of the easily accessible timber had been removed and prices had fallen. Most of the timber came from the Mabel Lake area and was sent down the river in the annual spring log drive. The mill was powered by wood burning steam boilers that also produced electricity for the city. 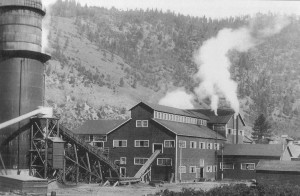 The town of Chase owes its existence to another American owned operation, the Adams River Lumber Company, which incorporated in 1907 and quickly became the largest mill in the interior. Most of the timber came from forests adjacent to Adams Lake and the upper Adams River and was floated down to Shuswap Lake where the logs were boomed and hauled to the mill in Chase. A splash dam built near the outlet of the lake to control the water level devastated the upper Adams salmon run which has never recovered. Lack of accessible timber as well as lower lumber prices resulted in the mill closing in 1925. 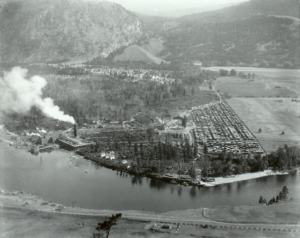 The Shuswap forest industry provided jobs for many settlers, especially during the winter logging season. As well, many pioneers were able to bring in much needed cash by cutting railroad ties with a broadaxe or cutting poles. For most Shuswap rural communities, farmers depended on forestry-based income to make ends meet. Yet for the most part, as is true today, the vast majority of the multi-millions of dollars in lumber profits flowed out of the Shuswap to company owners and shareholders in the U.S. and other parts of Canada.

There was not room to include information about the early sawmill built in Lumby. The White Valley Sawmill was built in 1888 by Pierre and Charles Levasseur. It was water powered and produced lumber for communities in the Okanagan. It was likely that the Lumby mill never grew to the size of the other mills because of transportation limitations, as lumber would have been shipped to market via horse drawn wagons on the early road to Lumby.