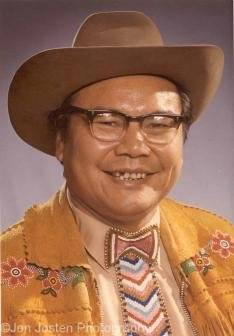 There are few Shuswap residents that have achieved provincial recognition, and fewer still that have attained either national or international prominence. It has been said that some men seek greatness, others are called upon and some are destined for greatness. It has been said that Chief George Manuel was destined to greatness. Although he passed away in 1989, his legacy of fighting for Aboriginal Rights lives on through the Centre for World Indigenous Studies that he helped establish in 1984, where the library is named after him.

Born in 1921 on the Neskonlith Reserve, where he did not hear an English word until he was eight years old, George was shuffled off to the residential school in Kamloops, where, at the age of 12, he contracted tuberculosis and was sent to a hospital near Chilliwack. It is likely that the pain of the illness that left him with a lifetime limp and his recovery time allowed him to develop his mental capabilities.

His first job was working as a busboy at the Tranquille Sanatorium, where he met Marceline Paul, a crippled Kootenay Indian who worked in the hospital kitchen. They eventually had six children and he supported them by working at a sawmill. He took his first political stand when at age 34, at the advice of his mentor, Andy Paull, he refused to pay for a medical bill, as the federal government had brought in an amendment to the Indian Act denying health coverage.

After teaching himself how to type and gaining public speaking skills at the Toastmaster’s Club, he began his political career by raising money for the local sports teams and hosting First Nation musicians, including a bass fiddler named Chief Dan George. He became a tireless community organizer, and by 1959 he was elected to succeed Paull as the president of the President of the North American Indian Brotherhood of B.C. Later that year he also became Chief of the Neskonlith Band.

Following a decade of promoting community development on reserves throughout the province and pressing for reforms in government policies towards Indians, George showed impressive leadership by his work to deal with the crisis presented by Trudeau’s White Paper that proposed to dissolve Indian nations and promote the assimilation of Indian people into Canadian society. In 1970, George became the president of the National Indian Brotherhood and used the power and resources of this countrywide organization to successfully oppose the White Paper.

As part of the effort, George travelled to Tanzania, which had achieved independence in 1964 without warfare, to speak with President Nyerere about how he could provide assistance to Canadian Indians. He was rebuffed and told that he first had to do a better job of organizing Indian communities to determine what they wanted, and once Indigenous peoples achieve their goals, they would become the Fourth World.

Inspired by his visit to Africa, in 1974 George co-wrote with Michael Posluns the book, Fourth World: An Indian Reality, a moving narrative of the Canadian Indians and aboriginal peoples everywhere and their struggle for survival. The book describes how Europeans and Native people have not co-existed and calls for Europeans to re-evaluate their goals and morals to allow for a “Fourth World” where Indigenous peoples and Europeans can live together without domination, but with respect for different ways of life.

In 1975, George, along with Indigenous leaders from across the globe, launched the UN affiliated World Council of Indigenous Peoples. George became the organization’s first president, a position he held until 1981 and he worked vigorously to ensure that the Universal Declaration of the Rights of Indigenous People became a reality.

Another crisis developed in 1980, when Trudeau’s government was working to patriate the Canadian Constitution in such a way that it would remove all Aboriginal Rights. To counter this initiative, George organized the Constitutional Express, trainloads of First Nation leaders that headed to Ottawa where constitutional negotiations were underway. Another delegation travelled to the UN and Europe to gather support for the cause. Eventually, they were successful and the First Nations of Canada had their rights entrenched in section 35 of the constitution.

Despite enduring a progressive heart disease, George continued his efforts to protect Aboriginal Rights throughout the world. But by 1989, his heart finally failed and he was laid to rest on a hillside above the spot where he was born. George received many honours during his life, including being thrice nominated for a Nobel Prize, becoming an Officer of the Order of Canada and receiving an honorary degree from UBC. George’s sons Arthur and Robert have followed in his political footsteps, both men serving as band council chiefs and his daughter, Vera, became an internationally known playwright and poet.

George Manuel’s book, “The Fourth World,” is out of print and unavailable in the Okanagan Library. The only copy on Amazon costs over $200! George’s son, Arthur, who is close to publishing his own book, reports that his publisher would like to reprint “The Fourth World,”and Arthur plans to add a chapter or two.

“As long as I am leader, Our position is not going to change from that of our forefathers. I do not want the responsibility for selling the rights of our children yet unborn.”

“There exists no cultural, social, economic or political victory in the history of mankind that did not cost the price of hunger, sweat, blood, agony, and money.”

“I don’t have to tell you, you know that the Indian today is suffering, more than any race in the world. Not because of poverty, not because of discrimination, not so much from exploitation, but from more then any other single factor , through loss of his values, his pride, his language, most of all his LAND, in other words his entire way of life.”

“You must understand that many Indians do not give a damn about white acceptance, they given up trying to make themselves understood long ago.”

“Everyone wants a meaning in life, everyone wants and needs a sense of involvement in something larger then the miserable competitive business of providing for his own wants. Everyone wants an opportunity not only to get up but to give up and everyone had something to give. There are more kinds of poverty then the material, and the law of compensation is such, that usually, he who is poor in one sense, is rich in another.”

“As Indians we have a big obligation and responsibility to ourselves and to out children. I say as an Indian that our first responsibility is to act and preach the gospel of action. Action to shed the shackles of ignorance and pity, and from out of the past, take up the war cry of battle, to restore our pride and dignity as men and women. We must rise and fight for what we want and believe, blow by blow, eye for eye, and teeth for teeth. We have to create an image which people of Canada and abroad will respect. An image we ourselves and our children will regard with pride.”

“I ask again to the Indian people, what are we going to do about over coming the many problems and frustrations facing us? You know, everyone knows, only Indian people by their own efforts and initiative can and will make the change from the terrible situation we are in. the future of the Indian People depends on the Indian People.”