Restoring a sense of place

Home » Restoring a sense of place 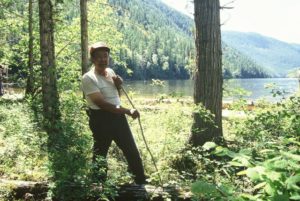 Chief Atahm School on the Adams Lake Indian Band reserve north of Chase, which is B.C.’s oldest aboriginal immersion school, has undertaken an ambitious project to determine most of this region’s original place names. School principal, Robert Matthew, believes strongly that “the only thing that makes us special is our language and our land.” Consequently, one of the school’s key goals is for its students to develop a strong personal identity that includes first-hand knowledge of the land and its place names.

Over the past few decades, there have been many traditional use studies prepared for development projects that include place names, but these reports are not available to the school, to band members or to the public. Instead, Robert has worked over many years with four elders to determine the original place names. They taught Robert that there is much more to a place name than words on paper, as in addition to knowing the name, one must spend time there on a regular basis, learn its stories and develop new stories based on any “adventures” occurring during the visits.

Robert has done just that every summer and now the students and their families, many from other bands than Adams Lake, are joining him. He described one trip fifteen years ago with five truckloads of adventurers on a quest to find the remains of an old cabin where families gathered before heading out to hunt. The three elders in the group, the late Joe Michel and Bill Arnouse and Lawrence Michel each had stories and memories to use in their quest, including how certain hills would line up with distant mountains. They found the cabin eventually near Stukemapten Lake. I too was there in the early 1990s with both elders and chiefs from two bands. 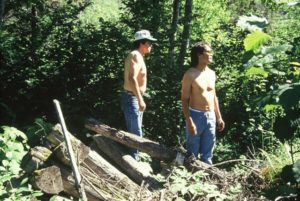 So far, Robert and his team have revived more than 280 place names, but more work is needed to ground truth the names. For example, he pointed to one name that means throwing something into the water, but the location was wrong as it was too far from the river.  Currently, they are working primarily on four areas; Adams Lake and River, southwest Shuswap, South Thompson to Hoffman’s Bluff and between Sicamous and Revelstoke. The eventual plan is to share all the place names with the public sometime in 2014 or 2015.

Robert kindly provided some of the place names in the project. The level bench area along the southwest shore of Adams Lake was once a large village called Wáwelt, and is now the site of the Interfor sawmill. To the north is T’keqiqe, now called Bush Creek, site of Adams Lake Provincial Park. The original name for Adams Lake, which was named after a famous Secwepemc chief in the mid 1800s, is Csteln. And the original name for Copper Island is Cemete’tkwe.

The place name project fits perfectly within Chief Atahm School’s curriculum and overall objectives. From kindergarten to the end of grade 3, students are fully immersed in the Secwepemctsin language. Conventional teaching methods are adapted to incorporate many components of traditional Secwepemc culture. Elders, including Lawrence Michel, join with the teachers as the students learn about gathering roots and medicinal plants, cleaning and smoking fish as well as singing and storytelling. Learning first hand about the original place names helps the students better understand who they are and thus improves their personal strength and ability to withstand prejudice. 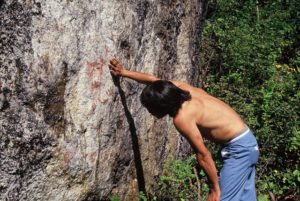 Examining ancient pictographs on a boulder next to Momich Lake

Yet, this remarkably successful educational program is now under threat due to the actions of the conservative federal government. Through recently proposed legislation, the Department of Indian Affairs would be able to influence all the First Nation schools in the country and could take away local control and initiatives. Robert would like to see a major backlash effort to resist the plan, but apparently First Nation leaders are trying to thwart the plan through negotiations.

It is the Shuswap place names on our maps that help make our region unique and special. Even though these names are likely an inaccurate derivation of the original name, they still provide us with a sense of place that connects us with the Shuswap peoples. Names like Cinnemousun, Spallumcheen, Squilax, Pukeashun, Celista, Humamilt, Hunakwa, Malakwa, Queest, and Momich certainly spice up our region more than the familiar British names that can be found elsewhere. It would be wonderful if we could one day add more of the original place names to our maps, so as to make the Shuswap a culturally richer place

Secwepemctsin had always been an oral language, until 1974, when Dutch linguist Aert Kuipers developed the present writing system for the language. This system consists of 43 consonants and 5 vowels, but even these letters do not represent the Secwepemc sounds accurately. The language is difficult to learn, as many of the sounds are not found in the English language. And there are three main dialects, in the east, the west and the north; and most of the words are either similar or the same, but with different pronunciations.

If we were ever to absorb more of the original Secwepemctsin place names, the spelling would have to be such that the names would be easier to understand and pronounce. Our current place names that stem from the Secwepemc people, although now inaccurate, are at least easier to pronounce than the original names.