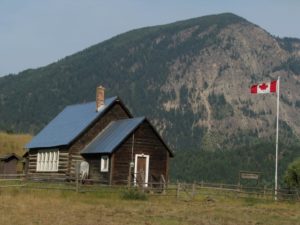 There is a well-used shortcut between the Shuswap and the North Thompson that utilizes the recently upgraded logging road above Adams Lake and then turns west at Agate Bay (also known as Squaam Bay) on a paved road that goes to Louis Creek and the Yellowhead Highway just south of Barriere. This small, narrow ranching valley, where Sinmax Creek flows from the petite Forest Lake to Adams Lake, is often overlooked as being part of the Shuswap. Yet despite its small size, it deserves attention due to its unique history and mineral resources.

The valley has likely always been an important travel corridor between Adams Lake and the North Thompson, and that is why Sinmax Creek was once known as Pass Creek. It was the showing of minerals that first attracted attention to this valley. The first news of the find was published in the July 8, 1893 edition of the Inland Sentinel in an article by John Fremont Smith, a respected prospector, Louis Creek store owner and later the first and likely only black alderman for the city of Kamloops.

Smith had journeyed into the valley where he inspected a galena claim by Hector McLean and Joe Zink just east of a waterfall and he too found a vein of pure galena. At that time, there were other nearby claims. He also found an old rocker, used for gold panning, that was about 30 years old, which indicated that prospectors had already been in the valley during the first gold rush. It was not until the following year after the claim had been sold to new owners that a wagon road was built and work at the Homestake Mine began in earnest. By the spring, some 600 tons of ore was waiting at Louis Creek to be shipped out by paddlewheeler, however massive flooding that year swept the ore into North Thompson River, never to be recovered. 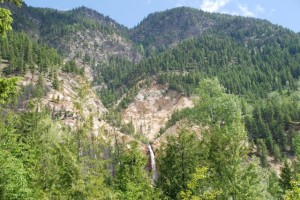 Homestake Mine site and waterfall

The first settler in the valley was G.J. Forrest in 1887, for whom the lake was named after. Others soon followed him and within a decade, much of the valley had been cleared, with ranches established. The soil in the valley is rich, because when the glaciers melted, the outlet of the Adams was blocked with ice for a time and thus the water flowed through the valley to the North Thompson depositing a thick layer of silt.

It was not until the Canadian Northern Railway was completed along the North Thompson River in 1915, that it became practical to ship ore from the valley and mining began in earnest. Two years later, the Kamloops Silver Mines became incorporated and with silver prices higher, the underground mine was operating at full bore.

Meanwhile, many of the settlers, who were still considered squatters, were being threatened with expulsion, as the rights to the valley timber was still held by the Adams River Lumber Company. Then in 1919, a massive fire swept through the valley destroying most of the timber and there were rumours that one or more of the disgruntled settlers started it. The fire also destroyed the mine buildings and infrastructure, and the site was abandoned.

The settlers enjoyed a good life in the valley, as they benefited from both the mine and the lumber company, which provided jobs and outlets for their produce, cattle and hay. As their families were growing larger, there was a need for a school and they built and paid for the first one in 1916 at Squam Bay. When it became too small, it was replaced with a log school in 1918 and the government chipped in $75 towards the construction. When this school became too small, a third one was built and the old log school was moved to where it still stands today next to Agate Bay Road and serves as a community centre. The last school was closed in 1964 and was moved to Brennan Creek. 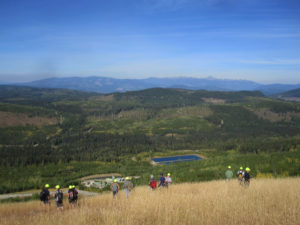 Mineral exploration in the hills north of the valley carried on and in 1989, the Shuswap’s largest mine opened up just below Johnson Lake. In just four years of operation, the Samatosum open pit sulphide mine produced over 22-thousand ounces of gold and over 30-million ounces of silver. However, as with most mines of this type, upon closure, acid rock drainage became a major problem. After a government pollution abatement order was issued in 1996, proper reclamation efforts began in earnest. In 2007, the company received a well deserved mine reclamation award. And it is likely that their water treatment efforts will carry on for many decades to come. 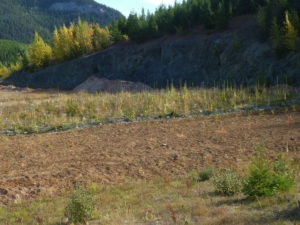 Samatosum Mine reclamation in progress

One other notable activity in the valley has been the watershed restoration work completed in Sinmax Creek, where the loss of riparian vegetation had resulted in significant erosion and loss of farmland, as well as an associated decline in Coho stocks. More than $450,000 of restoration funds has been spent under the direction of the Adams Lake Lumber and the Adams Lake Indian Band to stabilize the banks and restore native vegetation, which apparently is still holding up. 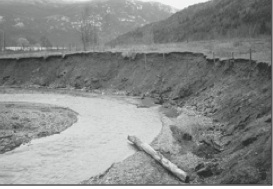 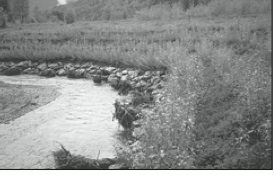 There was so much more to write about and yet there is not enough room in the Shuswap Market News for it all. To begin with, there is confusion around the naming of the bay. On a 1915 map, it is called Agate Bay. And adjacent to the bay is a small Indian Reserve called Squa-am, which refers to the shape of a woman’s breast. The locals have said that the first owner of the resort, the La Fave family, established just after WWII changed the name of the bay to Agate because he felt that Squa-am was insulting (close to Squaw). However, in reality the bay was called Agate much earlier as the map attests to and perhaps the name was chosen because the quartz found in the area does resemble agate, even though apparently there are no agates. 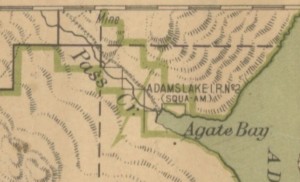 portion of the 1915 map showing Agate Bay and Pass Creek

To further confuse the naming issue, forestry maps refer to the bay as Skwaam Bay. And the local history book, that much of this material for this article came from is called “Silver Seams, Tall Timber and Red Earth, shared memories of the Settlements of Squam Bay, Fadear Creek, Blucher Hall, and the West Side of Adams Lake.” I chose to use the Agate Bay name, because that is the name of the road and the name on the 1915 map.

It would be wonderful if the local history book was available at the local libraries, since it was published in the year 2000. However, the committee unfortunately did not place copies in any of the libraries, except in Barriere and their copy is too worn out to lend. Fortunately there is one copy in the Kamloops Museum Archives, which I was able to read there. And there were once boxes of the books stored and for sale in an antique store in Louis Creek, but the store burned to the ground in the 2003 massive fire.

As for the restoration in Sinmax Creek, it apparently is holding up. However, the BC government has given up on watershed restoration and there is no funding for ongoing monitoring of all the work done across the province, let alone any funding for all the work that still needs to be done. No one knows how Pass creek became Sinmax Creek and what the word Sinmax means.

The valley is very scenic and is worth a drive. Another road heads south alongside Louis Creek and ends up connecting with the road to Sun Peaks. When there was a resort at the bay, it was a popular swimming, picnicking and camping area for Kamloops and area residents. But the resort was closed and the land sold off in small lots, where there are now cabins and trailers. Just north of the bay is a public recreation site for camping and fishing.