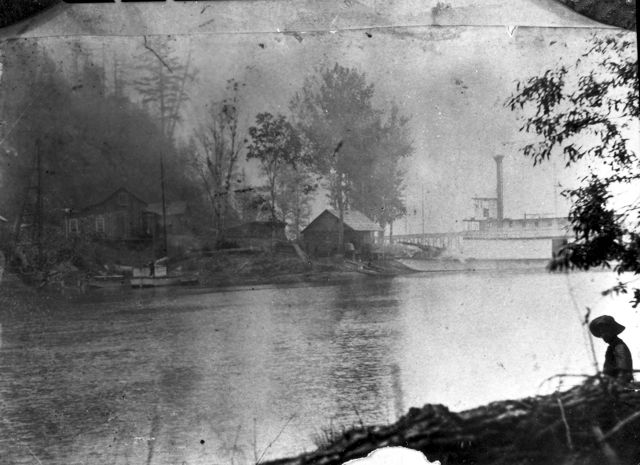 In the early 1880s, Kamloops was still a small cattle town with only one school and the only settlers in the Shuswap Lake area were in Chase and Enderby. The Inland Sentinel was published in Yale on an ancient press imported from California to Victoria in 1853 and it served the whole interior of the province. In October 1882, its owner/editor Michael Hagan wrote the following account of his trip on the sternwheeler, the Spallumcheen, from Savona to Fortune’s Landing (near present day Enderby) that provides a fascinating overview of the Shuswap prior to settlement:

“The Steamer entered Shuswap Lake about 40 miles from Kamloops. Upon the north side Mr. Jas. Hartney has been camped, getting out logs for the Shuswap Saw Mill Co. He has also got out 30,000 feet for the Railway, and has removed his camp to the opposite side of the lake, near its head, where he is now located at choice spot to get timber – Hartney’s Bay – a place land-locked. His present contract with the Railway Co. is for 270,000 lineal feet, principally for cribbing, to be delivered at Savona’s Ferry; he has a number of men and 4 yoke of cattle busy at work.

“As night approached our boat (after some hours delay in moving Mr. Hartney etc.) we passed Cape Horn where a shelter is always found. Passing the NE branch leading to the Big Bend, we entered the East Arm for 12 miles, where Mr. D. Grant, the well-known shingle-maker, was landed with his freight. The locality has a biblical supply of cedar trees, which are worked into superior shingles, shakes, pickets for fences, etc.

“Stopping over one night, we took on Mr. Francis Anstey. He informed us that he had an almost unlimited supply of cedar trees, from 6 inches to as many feet through, long and straight, and could supply timber of that description for railways as well as shingles; his shipments are stated to have been about 200,000 shingles. When Mr. Anstey was about to leave, Mr. Grant asked him to try and induce his (Anstey’s) Siwash to remain with him (Grant). Mr. A. said the Indian expected to get $30 due him for wages when they reached Kamloops, and asked if an Indian was ever known to stay behind with $30 in sight? That settled the question, and the boat shoved off.

“Today we steamed for 20 odd miles to the head of Shuswap Lake, and must say the scenery was very attractive. Generally the appearance was mountainous, with occasional strips of bottom land spreading at times to miles. The grandeur of the fresh green firs and spruce trees contrasted with the faded yellow look of the cotton wood, and gave variety to the scene. The water was, in places, very clear, and presented salmon, whitefish, and trout, while wild geese and ducks abounded; grouse etc. were to be seen along the banks. We passed numerous places along the bank that are flat, light-timbered, and above the high-water mark. The soil was said to be excellent.

“About 70 miles on our journey we passed to the right Salmon River, and, nearly opposite, to the east runs Eagle River. Our captain two years since had taken Major Rogers, his nephew, and his dozen Indians some miles up the river when the persevering explorer started to find the passage for the railway, since reported as practicable and likely to be adopted.

“From Savona’s Ferry to the head of navigation at Mr. Lambley’s landing or Mr. A. L. Fortune’s, is 142 miles by water, or 105 by wagon road. The landing is comparatively a new place, but signs of progress are visible in the fine warehouse and other buildings, and cultivated fields to be seen. Mr. Lambley is Govt. agent, and prompt to give information respecting lands or anything pertaining to his office. Evidently he is energetic, and is rendering good service to the district.

“A few notes on the locations identified in this account: Hartney’s Bay may refer to Blind Bay, which is landlocked since there is no navigable stream there. Cape Horn, named after the tip of South America, is more commonly known today as Ruckell Point (incorrectly named after an early settler, Jack Ruckle).  Mr. Hagan most likely returned to Yale via horseback on the old Brigade Trail through Falkland.