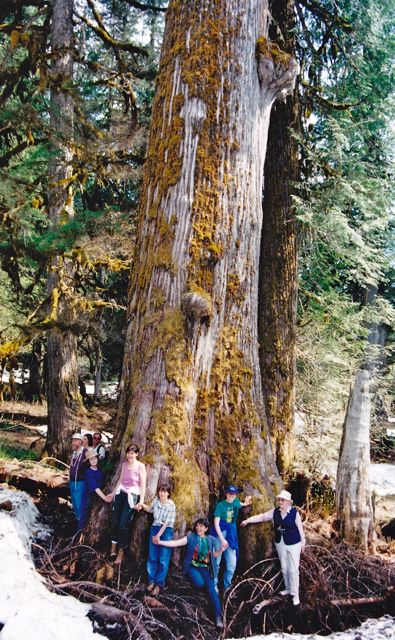 A group of conservationists surround a 3.65 metre diameter ‘Seymour giant’ which was slated for logging. A framed copy of the 1993 photo was given to the Minister of Forests’ regional manager, who issued a moratorium that allowed the company to only log half the blocks. After six years of intense advocacy and negotiations, the Upper Seymour River Valley became a provincial park.

The Shuswap Environmental Action Society (SEAS) recently celebrated its 25th anniversary with a party that included some great local live music. I helped form SEAS with local activists who had been involved with other local advocacy groups, including the Shuswap Nuclear Action Group, the Shuswap-Thompson River Research and Development Association, and the Shuswap Recycling Society.

At the inaugural meeting in February, 1989, I gave a short speech that included these thoughts, “We are all sick of hearing how we live in a throw-away society, how our forests are being clear-cut at double the rate that they are growing back, how our lakes and rivers are dying from pollution, how our food is full of chemicals that cause cancer and how our governments respond only when the problems reach epidemic proportions. We want to find out how these global problems relate to us here. We hear on the news how poorly the B.C. forests are being managed, but what we need to find out is what forestry problems exist here at the Shuswap.  We need answers, we need to spread the word, we need to take action and we have to fight from the grassroots level up. “

It did not take long after incorporation for the fledgling society to begin taking action. In just its first year, SEAS sponsored a well-attended forestry workshop that included a field trip to recent Larch Hills clearcuts with forest service staff and a local sawmill forester. A very successful Earth Day event at the community centre with speakers, displays and a dance band raised significant funds to publish an educational newspaper, the Shuswap Eco-Watch, with articles on waste dumps, forestry, pesticides, radon gas, recycling, and water quality, an issue that continues to be a major concern.

For the next few years, SEAS focused on developing a sustainable stewardship plan that further evolved into advocacy efforts to improve forestry practices, promote wilderness conservation and push for land use planning. Two more Eco-Watch newspapers were published with colour satellite photos showing where logging was proposed, followed by a series of newspaper columns promoting park creation. Map brochures were published to encourage the public to visit the endangered wilderness areas that needed protection and a video was made called Shuswap Wild with spectacular photography including aerial scenes.

Land use planning began in Kamloops in 1992, which, after three years, resulted in new parks in the Adams Lake area in addition to many others in that region. Finally in 1995, land use planning began in the Okanagan Shuswap, and SEAS conservation efforts evolved from advocacy to process and finally negotiations. The result was 25,000 hectares of new parks, including the Upper Seymour River rainforest and the magnificent Anstey-Arm Hunakwa Lake wilderness area. Additionally, thousands of hectares of old growth forest were set aside and there was direction for vastly improved forest management to better protect non-timber forest values.

In an effort to advocate for lowering the rate of logging, SEAS produced a spatial timber supply analysis in 1994 that clearly showed how there would be little intact forest left after 17 years. The rate of cut was never decreased, which likely contributed to the loss of this region’s major sawmill in Canoe a few years ago.

In 2008, the successful effort to halt the proposed marina and condo development near the mouth of the Adams River resulted in national media coverage. And while we were unable to see the property purchased by the provincial government to be added to Roderick Haig-Brown Park, the current plan for the Cottonwoods Campground includes public access to the beach, restoration of significant fish habitat, removal of the buoys, and a continuation of RV camping.

After SEAS helped change the map of the Shuswap through the creation of new parks, in 2010 it worked with many diverse partners including all levels of government to produce the first map of the Shuswap watershed in a poster format.

Over the 25 years, SEAS has sponsored countless forums on many issues, including lake water quality, pesticides, climate change, watershed management and the tar sands and pipelines. It helped initiate the Regional District parks system and has investigated the impacts of poor logging practices that resulted in numerous debris torrents that have devastated local infrastructure.  After 25 years, SEAS has left an impressive legacy of new parks and improved environmental protection measures. To learn more about SEAS, visit its website, seas.ca and watch The SEAS Story video on YouTube.