This Shuswap town was once a French enclave

Home » This Shuswap town was once a French enclave 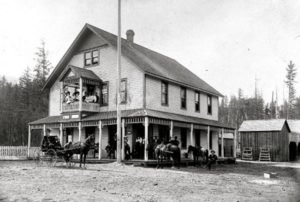 Although the Lumby area is most often considered to be part of the North Okanagan, it is actually in the Shuswap watershed, as Bessette Creek flows through the town before it enters the Shuswap River. The first settlers came from Quebec in the 1870s and named the area White Valley after George LeBlanc who built a four-room cabin in 1874. The first one to pre-empt land was Mr. Bessette, who arrived via the Okanagan Brigade Trail before 1874.

At that time there was no town of Vernon, so all the supplies had to come from Kamloops. The early families pre-empted large acreages and after years of difficult land clearing, their properties were converted into excellent farmland. Most of the tools they used were crude and homemade and even their wagon wheels were sawn from large logs. With no roads, they were forced to travel on rugged trails for long distances.

A few years before there was any development in Salmon Arm, the White Valley settlers began to develop a town. When Louis Morand sold most of his 650 acres, he kept 40 acres where he laid out the townsite and named it Lumby, after Moses Lumby the government agent for the district of Vernon. He built the hotel in 1891 naming it the Ram’s Horn and when it burned down that year, he quickly constructed another one. In those days, mail was brought in by horseback by Charles Christien, whose family was also one of the first in the area.

While the first settlers were attracted to the valley for farming, it was the region’s abundant stands of timber that later became the mainstay for its economy. Paul Bessette built the first sawmill, which was powered by a waterwheel. In these early days, there were cattle drives and thousands of tons of hay were hauled to Vernon via horse teams and wagons and then shipped to Vancouver via rail.

Given that many of the first Lumby settlers came from Quebec, they were Roman Catholic. Their first church services were held in the Bessette’s dining room with Father Pandosy who travelled widely from his base in Kamloops until his death in 1891. The first church was built in the valley in 1892 and served the community until 1921, when a church was built in town while Father Carroll was the resident priest. 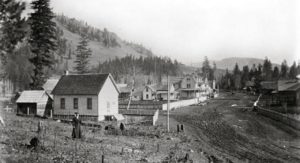 Tom Norris came to Kamloops in 1893 at the age of eighteen with hopes of becoming an engineer. Instead, he chose teaching as his first profession and after writing his exams he moved to the White Valley where he became the area’s first teacher. He lived at the Ram’s Horn Hotel and described in his 1954 memoir the view of early Lumby from the piazza above the veranda as “four smoking chimneys” and remembered the settlers for “their cheerful, whole-hearted hospitality.”

As was the case for every early community in the Shuswap, the need for socializing meant the building of a hall was always a priority. For Lumby, the first hall was the upstairs of the store built by Louis Morand in 1898. When the town’s building boom began in 1912, Dr. Ormsby built the first community hall. By 1933, it had become too small, so the community pitched in and built a larger one. However, the flooring material was delayed until the day prior to its scheduled opening. The men worked all day and night installing the boards just in time for the big inaugural dance. 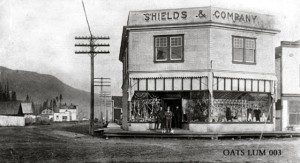 It was not until 1924 that the first railway tracks were built to Lumby, which allowed for the construction of the large sawmills that became the major employers for the region. By the 1950’s, the annual payrolls totalled over one million dollars and lumber production exceeded the combined output of Kamloops and Kelowna.

Even though Lumby has both a museum and a published history, it was difficult to find the information needed. Local histories, like that of Lumby’s, are sometimes simply a collection of family histories and do not include the general facts about how the community developed. Fortunately, the Okanagan Historical Society published Alleyne Tull’s “The Story of Lumby” in 1956, when the town was first incorporated, which was the source of the historical details for this column.

Times have certainly changed for the small town of Lumby. With most of the sawmills shut down and the nearby glass plant now gone, there are few employment opportunities. Yet, the town carries on and community spirit there remains high. An interesting and scenic circle trip is to drive east from Enderby, take the Trinity Valley Road to Enderby and then head to Mabel Lake, then to  Wap Lake and Three-Valley Gap before returning on the Tran-Canada Highway.