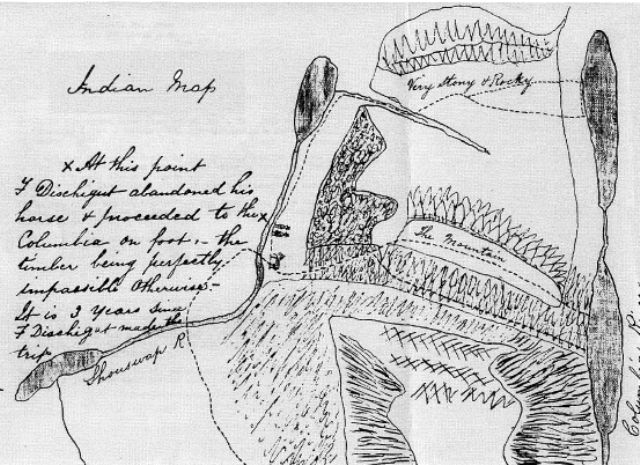 No discussion of mining in the Shuswap would be complete without a review of the early Cherry Creek gold rush and the succeeding years of both placer and underground mining in and near Cherryville. The story begins as early as 1858, when Louie and Joseph Christien arrived in the valley to settle near where the town of Lumby is today. According to the Christien family records, Louis, along with his friend William Peon discovered gold at Cherry Creek in 1862.

Three years earlier, gold was discovered along the banks of the Kettle River and its headwaters are close to the headwaters of Cherry Creek. The result was a mad rush of American miners across the border and in 1860 there was a clash between the Americans and the Chinese. When the fledgling B.C. colony sent its gold commissioner there to quell the disturbances, he was driven from the mining camp by a hail of stones, which Victoria newspapers dubbed the “Rock Creek War.”

Consequently, it is possible that when more gold was discovered in Cherry Creek, the government in Victoria decided to keep a lid on the news. They dispatched newly appointed Assistant Commissioner of Lands and Works, William Cox to survey the country to determine where a road could be built to the Columbia River and to identify potential Indian reserve lands. Thick standing and downed timber prevented Cox from travelling any farther east than Cherry Creek and with the help of his Indian guides he drew a crude map of the region.

It did not take long for mining activity to begin, as the November 2, 1863 edition of the British Columbian noted that 200 men will winter there and that a contract had been issued for two bridges over the Shuswap River. And in July 1864, the newspaper described how there were three companies working at Cherry Creek and that one claim was paying $20 a day to each hand. 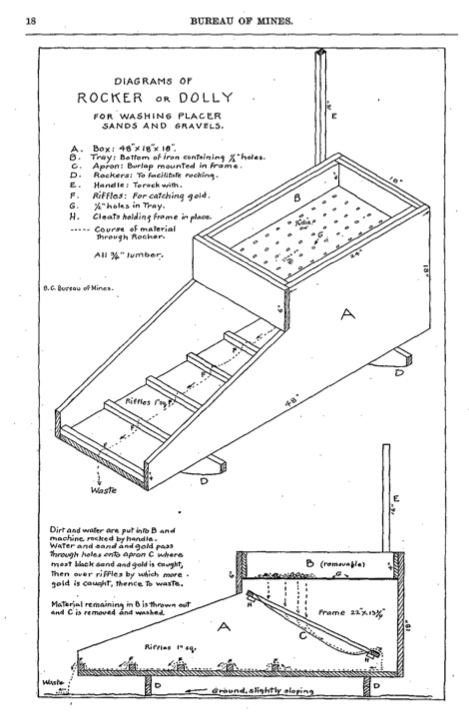 In 1874, British Columbia began publishing annual mining reports and the first one noted how silver had also been discovered at Cherry Creek, however “every effort to discover a well-defined workable lead has been fruitless, the very heavy character of the timber and superincumbent brushwood and soil forming an almost insuperable obstacle to successful prospecting.” The 1876 report described how a “bona fide seam of pay dirt” had been discovered and that the best claims were located 50 or 60 feet above the creek.

It took until 1877 for a road to finally be constructed from Lumby to Cherry Creek. The 1877 mining report described the first tunnels into the hillside and suggested there were other nearby creeks with successful claims. Apparently, an earlier mining company had spent upwards of $20,000, a princely sum in those days, tracing a vein of quartz ore without success, but that a new company may have found it again. Most of the work then was placer mining and involved using water pressure to wash vast amounts of soil and gravel, which likely resulted in damage to spawning beds in both the creek and nearby Shuswap River.

With the new road came families and thus, Cherryville was formed, followed by other nearby farming communities. More quartz veins were explored and mined nearby in the Monashee Mountains and by 1930 over 16,000 ounces of gold and minor amounts of silver had been extracted. Despite all this mining activity, Cherryville has remained a tiny village even though it is one of the oldest communities in the Shuswap.

Through some extensive research on old mining activity, information was uncovered about another mine north of Sicamous at Marble Point called the Iron Mask. The 1900 government mining report explained how two shafts had been dug into veins of pyrrhotite. By the next year, the tunnel was 220 feet long and that the value of the ore was averaging $12 per ton. There were 73 men working there in 1905 and 14,629 tons had been shipped to the smelter. Few reports exist after 1905 and remnants of the old shaft can still be found at what is now one of Shuswap’s Marine Parks.

There have been many other mining ventures elsewhere in the Shuswap. For a brief time in 1930, interest was high regarding silver-lead-zinc claims on Crowfoot Mountain. Pits were dug and some ore was removed, but obviously there were insufficient quantities to warrant further efforts. Scotch Creek was the sight of a small gold rush in 1885, when laid off White and Chinese CPR workers headed there to strike it rich. However, after the placer operations had finished by the turn of the century, any future attempts to find rich veins of ore in the surrounding hills were unsuccessful. 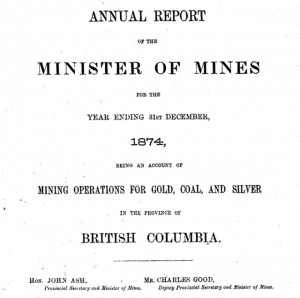 Going through the old mining reports provides a sense of just how insignificant the Shuswap region was regarding mineralization. By the late 1800s, each report contained hundreds of pages with only a few sentences or paragraphs about activity in the Shuswap. It is no wonder that to this day, the Shuswap region has not become one of the more familiar regions of B.C., like the Cariboo or the Kootenays where mining created cities in the mountains and plenty of stories in the newspapers, as well as reams of government reports and significant economic benefits.

Information about another old mining exploration site just below the lookout on the trail between White Lake and Blind Bay is still needed, as the remains of an old mine shaft can be found there. The information about the 1862 map and the very early days of Cherryville comes from a website journal produced by Don Elzer, called the Monashee Almanac.