Gleneden was once a Finnish community

Home » Gleneden was once a Finnish community 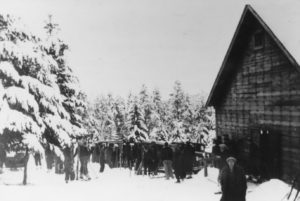 Ski-jumping event at the Gleneden Hall in the 1930, photo courtesy of Salmon Arm Museum and Heritage Association

While it is now a rural suburb of Salmon Arm, Gleneden was once a thriving Finnish farming community where residents shared a passion for sports, theatre, potlucks, music and other social activities. According to Hans Kusisto, the son of one of the area’s early Finnish pioneers, it was the first settler, Emerson Bowman, who chose the name Gleneden, as the valley reminded him of a glen back in his native country England and he deemed that its paradise nature was like the biblical Eden.

Many Finnish immigrants first settled in Salmon Arm where they built a hall on Front Street that had a second floor with sleeping rooms that provided temporary accommodations for single men. According to Salmon Arm historian Ernest Doe, the first surveys in Gleneden were done in 1893 and the first wagon road was built in 1896, primarily for logging.  The Finns began to homestead in Gleneden in the early 1900s, including Hans’s father Frank in 1912 and Victor Hill in 1909.

By the late 1920s, the majority of the Finnish settlers were living in Gleneden and thus the hall in town was sold and a new community hall was built by volunteers on property donated by the Maki family. The old hall was a single story wooden building with a partial basement for the kitchen. The settlers also built a school, which used the hall for concerts and other get-togethers.

Many plays were hosted in the hall, both in Finnish and English. Key to the success of the community was the volunteer help by local women, who later formed the Gleneden Ladies Club in 1946 under the leadership of Mrs. Mary Korpi.

One of the most popular pastimes at the hall was recreation badminton that included invitational tournaments. By 1930, the Sports Club was formed that sponsored a variety of activities including ski jumping on “Boot Hill” just above the hall and cross-country racing with homemade skis. Former Olympian Eino Jatteenmaki provided instruction, which helped to increase local enthusiasm.

Every winter a standard size hockey rink was built next to the hall. In the summer there were both men’s and ladies’ softball teams that often travelled to outlying areas for games. After softball practice, campfires were built along the road where the players would spend the rest of the evening socializing with family and friends.

The old hall was shut down by the government during the final years of World War II, because Finland had defeated Russia, which was an ally, when it attempted to invade the country. Finns were “classified as enemy aliens” and thus were not allowed to hold group activities. With the Finnish Society disbanded, the Gleneden Community Association formed in 1945 to manage the hall.

When the Gleneden School was lost to fire in 1970, students were bused to West Salmon Arm West Elementary. As a result, there were fewer activities at the hall. Three years later, the massive Gleneden fire destroyed the hall, along with many homes and farms.

Efforts to rebuild the hall were led by Margaret Lund and Rocky Johnston, with financial help from government grants and insurance and thanks to donations of lumber from Federated Co-op.  Construction proceeded thanks to the efforts of community volunteers and the new hall was opened in 1975.

The new hall, with its modern kitchen, three washrooms and hardwood parquet flooring has served the community well for card games, bingo, dances, karate, badminton, meetings and weddings. Other groups have also benefited from using the hall for dances and concerts.

However, due to changing circumstances, the multitude of recreational opportunities and the current fast paced, digital society, community activities have seen a decline. Hans has certainly witnessed the changes, as he explained, “in those early days the Hall was strong as we did things together and now most people who live here do not even know each other.” 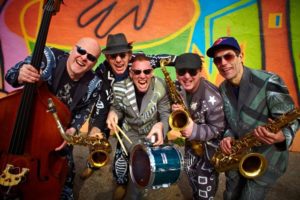 On November 15, there will be an opportunity for music lovers to once again experience the appealing nature of the Gleneden Hall as the legendary Shuffle Demons will be playing for a jazz concert and dance in the same hall they played in 1992 at the first Roots and Blues Festival. Joining them will be the much-loved R&B band, the Salmon Armenians. Tickets for the event, a benefit for the Shuswap Environmental Action Society, will be available soon at Acorn Music in Salmon Arm.

Most of the information on the history of Gleneden in this column comes from an unsigned history of the hall obtained from the Salmon Arm Museum and Heritage Association. According to the Salmon Arm Observer archives, the inspector of enemy properties seized Gleneden Hall in 1940 because it was registered in name of the banned Finnish Association.