A moose tale like no other – population in decline

Home » A moose tale like no other – population in decline 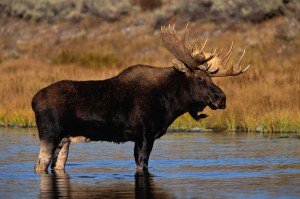 There is nothing like catching sight of a massive moose to evoke a sense of fascination and awe, but given the current moose population decline caused in part by climate change, such an experience may become far less likely. And yearning for the good old days of abundance would be a misunderstanding, as moose are a recent migrant to the Shuswap and the entire southern interior of the province.

Moose are the largest member of the deer family and the and the least gregarious, they are native to the northern boreal forest and their name originates from the Algonquin word moosu for “twig biter” or he strips off young tree bark.” With their odd looking flap of skin called a dewlap or bell hanging below the neck, their hump above the shoulders and the male’s antlers that vary in size and shape according to their age, moose are their own comic caricature. 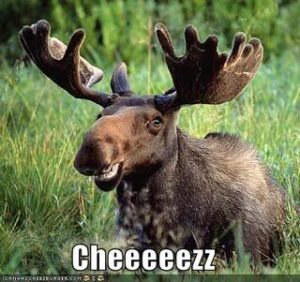 It was logging and road building that allowed moose to migrate south to the Cariboo-Chilcotin sometime in the 1920s, and they may not have appeared in the Shuswap until the 1940s. Along with the moose came wolves and as logging proceeded up the mountains, the wolves have now nearly annihilated all but a few remaining small herds of mountain caribou.

Across North America, moose populations are declining rapidly. In the U.S., parasites have become a major problem, as warmer temperatures and higher moisture levels encourage the growth of the parasites. Moose hunting has been banned in Minnesota, where one population is at fewer than 100 from 4,000 and another is now less than half. There, the main culprits are brain worms and liver flukes, whereas in New Hampshire it is winter ticks.

In British Columbia, where there are three sub-species of moose, populations are also in rapid decline. Government surveys show a 70 percent drop near Terrace, a 60 percent drop near Anahim Lake and a 50 percent drop around Prince George. Wildlife scientists are putting the blame on the pine beetle epidemic, which has resulted in massive clearcuts that reduce cover for the animals and improve access for wolves and hunters.

Another problem is the increased use of all-terrain vehicles that provide easy access throughout the landscape. A report by Wildlife Infometrics of Mackenzie singles out unregulated hunting, which includes First Nations, who hunt without restrictions on the number, sex or age of the moose they take and are not obliged to report kills. But parasites may also be part of the problem, as in April, a moose that was starving and infested with ticks wandered into a Smithers grocery store. It was later euthanized.

Here in the Shuswap, there are also reports of rapidly declining numbers of moose, particularly in the North Shuswap. Former local and provincial BC Wildlife Federation president, Mel Arnold, has heard from an Adams Lake area trapper who saw only one moose in 2012. Two other local hunters have confirmed Mel’s concerns and all three put the blame on wolves, which have apparently increased in numbers and have been seen at low elevations.

We cherish the memories of every moose sighting, including the large bull moose we observed from our canoe that was swimming across Greenbush Lake. And then there was the moose that was headed straight for us with a logging truck directly behind it as we drove the steepest and narrowest section of the Adams Lake road in the winter. At the very last moment before impact the moose turned and jumped off a cliff, but no doubt it survived the snowy descent.

In the winter, we often see signs of moose along the many deer tracks in the Lee Creek hills. And occasionally, we even see them along the highway near the lake. Sadly, these majestic creatures seem to be headed to oblivion, as yet another victim of the warming climate, development and perhaps, overhunting.

Of course the loss of moose will negatively impact hunters and families that depend on freezers full of moose meat for the winter. But ironically, because moose are a relatively new migrant to the southern interior, the loss of moose may indeed be returning the ecosystem to more natural conditions.  But for the central and northern B.C., where moose have long been an important part of the ecosystem, their loss could end up to be part of the downward, climate change induced spiral that is occurring throughout the world.