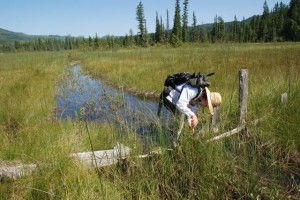 Shuswap’s unique valley of the gods

It is a landscape so unique and fragile that the public is forbidden to enter. The 178-hectare Mara Meadows Ecological Reserve, located in a hidden valley below the Larch Hills ski trails, protects a unique calcareous fen wetland ecosystem that is home to the richest diversity of orchids in the province and many other rare species. We recently had the opportunity to accompany the voluntary warden for the reserve, biologist Jeremy Ayotte, on his bi-monthly visit to measure the water levels.

We were advised to wear an old pair of running shoes as we would be walking in the water and rubber boots would be too hot and uncomfortable. After a short hike through the trees we entered the end of the valley, where a long beaver dam contains the water, which has killed numerous cedar trees. Jeremy took the first measurement while standing almost up to his waist in water. 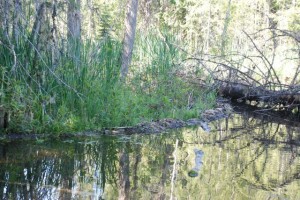 Beaver dam near the outlet of the creek

The three of us hiked along the edge of a vast marshland until we reached the mudflats that would be dangerous to enter due to the risk of being swallowed up in the quicksand-like mud. One of our goals was to see one of the resident Greater Sandhill Cranes that nest in the meadows. And sure enough, we heard their loud clicking calls and with scopes we were able to view a pair of the majestic, large grey birds with bright red heads at the far end of the meadow.

Dangerous quick-sand mud in the meadows

We were also on the lookout for the unusual, carnivorous Sun Dews and soon we found a patch of the tiny, red leaved plants on a dry knoll. Tentacles surround each leaf, each with a drop of sticky sap that sticks to the unwary insect that lands on the plants. The tentacles actually close around the insect to digest it. 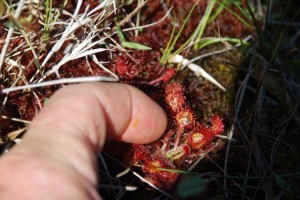 On our return, Jeremy took a few more measurements at the small wooden dams that barely block the flow in the old ditch that flows through a portion of the meadows. He is carrying on the practice begun over fifteen years ago by the previous reserve warden, famed outdoor enthusiast John Coffey who passed on last year. Stable water levels are key to the health of the reserve and previous concerns about the potential for reduced flows have been replaced with concern about rising levels due to the work of the beavers. BC Parks is now planning to install a permanent measurement instrument. 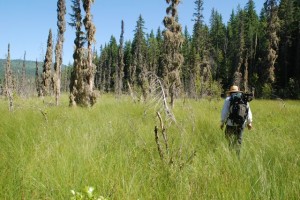 Up until the late 1960s, the meadows were considered a useless area to be avoided. When an agricultural lease was filed, the applicant attempted to drain the meadows first with heavy equipment and when that failed, with explosives. At that point, the North Okanagan Naturalists took an interest in the valley and in 1969 a proposal was submitted to the government for its protection. In 1972, the meadows were made a reserve, which was further enlarged two years later.

The naturalists built the small wooden weirs and dams in the ditch to slow the drainage and help maintain the water level in the bogs. However, much of the water in the meadows is not surface water from the two creeks that flow through it, but is carbonate-rich spring water emanating from nearby limestone bedrock. The combination of the alkaline water and the alkaline and acidic soils contribute to the rich plant diversity of the meadows.

Another amazing feature of the unique valley are the three drumlins, two of which are in the reserve. Drumlins are small, elongated hills that look like half-buried eggs and are composed of glacial till that remained after the glacial ice retreated. The drumlin we saw was covered with trees, but its dome-like shape was still discernable.

During the Okanagan Shuswap Land and Resource Management Planning process (LRMP), local conservationists advocated the protection of Violet Creek, which runs through the meadows, as well as an adjacent portion of forested land. They were successful, and the 124-hectare Upper Violet Creek Park protects the strip of riparian vegetation on both sides of the creek above the meadows, while still allowing recreational use for Nordic skiing. An adjacent area to the meadows was also protected, but it has yet to become a legislated park.

Learn more about the Mara Meadows at: