Why every autumn smoke gets in your eyes

Home » Why every autumn smoke gets in your eyes 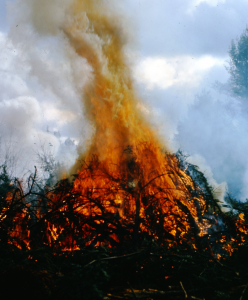 There was little time to revel in the sudden appearance of sunshine in October after over a week of low dense fog, because our skies quickly filled with smoke from countless logging slash piles.  While forest practices have improved since the bad old days of the 1980s, forest companies still routinely slashburn, and the amount of material going up in smoke has increased despite the growing concerns regarding, waste, air quality and increasing levels of CO2 that fuel climate change.

The primary rationale behind the yearly practice of slashburning is to reduce wildfire hazards, as history shows that many massive forest fires began in the mass of logging debris of branches and tops left in logged over areas. Most slash is now burned in piles near the landings where the logs are piled, as the practice of broadcast burning over the entire logging block is rarely used, due in part to the many times these fires escaped into standing timber, but more so due to the currently used practice of mechanized “whole tree” logging where the entire tree is brought to the landing. 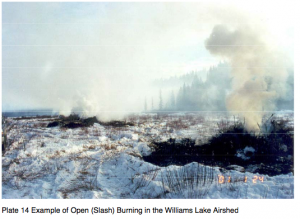 Fortunately, slashburning is far more regulated now than in the past as burning is only allowed when the venting conditions are such that the smoke rises and dissipates quickly.  After many years of public complaints and public health concerns the provincial government finally recognized how excess smoke in the air can cause illnesses and exacerbate existing health problems such as asthma and brought in regulations to better control slashburning.

Yet, while the government has toughened the rules for burning, it has loosened the rules regarding logging waste and it has far fewer staff monitoring logging operations. Forest companies revised utilization policies to cope with difficult market conditions, so that the minimum 4 inch top was increased to 6 inches, which has increased the amount of material and useable timber in the burn piles.

Observations from numerous sources have confirmed that logging waste piles in Shuswap area forests have been increasing in size and number. Last year, we took photos of some gigantic piles along the road to Eagle Pass Mountain. While options do exist to minimize or utilize logging waste, companies are fixated on their balance sheet and thus can only afford to burn. 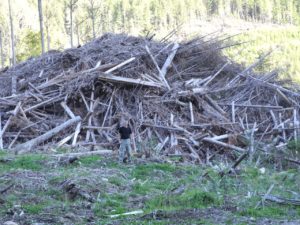 Elsewhere, waste wood is used to make pellets or is used for bio-fuel in highly efficient co-generation power facilities. One local company that no longer exists, Riverside Forest Products, experimented with mobile chippers and spread the material back out on the blocks where it can break down quickly and improve soil fertility.

Even though forestry companies claim they log responsibly and maintain the sustainability of the forest resources, whole-tree harvesting does just the opposite, by removing the woody debris that would under natural conditions rot and build up the forest soil.  Most of the nutrients in trees are in the branches and needles, both of which mostly end up in slash piles.

Typically now, logging is done by feller-bunchers and grapple skidders that pull entire trees to the landing where a processer limbs, tops and bucks each tree, leaving the waste in massive piles. After a year or more of air-drying, a forestry crew lights up the piles using a mixture of diesel and gasoline with back pack pumps, the same back pack pumps that are used to hold water during fire season.

Studies show that air pollution is a major cause of health problems. Wood smoke contains fine particulates that enter eyes and respiratory systems as well as toxic air pollutants, including PAHs, benzene, formaldehyde, acrolein and methane. While a rural lifestyle is usually considered healthier thanks to cleaner air and water, every fall the use of our skies for disposing logging industry wastes can mean our health is actually being compromised.

As well, due to the pine beetle and massive slash pile burning, B.C.’s forests have turned from a carbon sink to a major contributor of carbon to the atmosphere.  According to provincial data, annual net CO2 emissions from forestlands are 82 million tonnes, which is far higher than the 62 million tonnes from industry and transportation.  Perhaps it is time to consider a policy proposed in a 2003 Simon Fraser University research project that would reduce slash burning by attaching a fee for all fibre burned that would thus encourage environmentally sustainable alternatives.

While slashburning is wasteful and pollutes our airshed with carcinogenic smoke, it does not compare to what we have to put up with during a major wildfire season, when the smoke is so thick it blocks out the sun. And fire is indeed part of the natural ecosystem functioning.  Ironically, due to the many decade long policy of putting out wildfires, the build-up of dead trees and branches in the forests contributes to the size, number and severity of s that get out of control. Consequently, controlled burns are often needed to replicate natural fires that do not destroy forest but serve as a cleaning up function.

Given the pressure caused by climate change, we do need to re-think how logging waste is dealt with, as currently the practice of slashburning contributes to the problem. Ideally, to reverse climate change, forest management should focus on minimizing the amount of logging, especially the remaining few old growth forests, and the associated practice of burning and maximize restoration and the re-growth of healthy forests.