What happened to dancing?

Home » What happened to dancing? 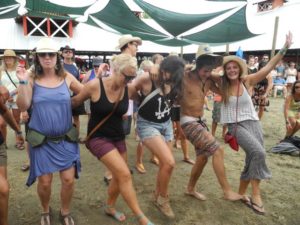 Despite the enormous increase in opportunities to hear live music in the Shuswap, there has been an unfortunate decline in community dances. A number of factors have resulted in the decline, including more stringent rules and regulations, more expensive fees for use of facilities, and a waning of interest in dancing. This situation was certainly not always the case, as the Shuswap has a long history of dancing.

First Nation pow-wows stem from the Secwepemc peoples age-old traditions of drumming, chanting and dancing.  Before the days of movies, radio, and television our Shuswap pioneers enjoyed live music and dancing and some of the first community structures built by volunteers were the halls used for these events. And prior to the construction of community halls, one–room schools and barns doubled as community centres for concerts, dances and parties.

Shuswap Lake settlers had barely begun clearing their lands and planting their fields in October 1906, when Blind Bay pioneers held a week-long work bee to build their first hall. People came from all over the lake to help and when the log building was completed in March 1907 there were 70seventy settlers dancing the night away. Blind Bay pioneer Archie Reedman’s diary is filled with descriptions of dance parties, some lasting all night long.

Fast forward to the 1970’s and early 1980’s, the Shuswap Coffee House organized dances at the Glen Eden Hall and the old Shuswap Theatre in Tappen. Dances were a popular year round activity at community halls throughout the Shuswap. The Salmon Arm Folk Music Society sponsored dances and concerts for years at the Community Centre and in various halls. When the focus shifted to the annual Roots and Blues Festival at the Fall Fair grounds, the concerts and dances ended.

Part of the blame for the decline in community dances lies in the higher costs and the difficult to obtain liquor permit, that amounts to what I characterize as a war on fun. Consequently many community halls, including the SASCU Recreation Centre are seeing limited use for dances as few groups can cover the higher rents and insurance and they struggle to find volunteers to run the events.

But there also appears to be a decline of interest in dancing. One of the oldest organizations in the city, the eighty-year-old Salmon Arm Dance and Social Club holds six dances a year at the Legion, many with live bands. However, the membership has declined to 30, as perhaps there are fewer people that want to polka, fox-trot, two-step and waltz. 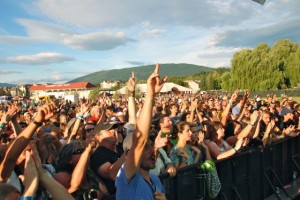 The trend for the Roots And Blues Festival has been for less dancing and more standing in a crowd vibrating, which is what the younger crowd likes to do. This year the dance area was taken over by people in chairs and the gyrating standing crowd owned the front of the stage area. The dance tent did see a steady number of people eager to learn new types of dance or improve their skills and there is usually some creative dancing happening at the Boogie Barn Stage and along the sidelines at other stages.

There is indeed a crowd of people in the Shuswap and nearby communities who enjoy dancing to great live music, whether it is country, rock, blues or reggae. One of the region’s most successful events of the year is the Trail Alliance shindig at the SASCU Recreation Centre and the dance floor is always crowded. In April, I helped organize a successful, well-attended dance at the Canoe Hall with a great band from Kamloops that raised funds for the Downtown Activity Centre.

Thankfully, especially for the dancing crowd, a new Shuswap Recreation Society initiative dedicated to presenting live music called the Shuswap Music Hall in partnership with music producer Mark Greenhalgh is hosting its first event on Friday, September 20th. This will be an opportunity to dance to B.C.’s much acclaimed Latin-rock-soul-reggae band, The Boom-Booms, plus Kamloops own funk-soul-R&B band, Earthbound. Tickets are available at the SASCU Rec Centre or by phoning 832-4044.

Why dance? – It is healthy, it feels good and it is the best way to enjoy great music. While some folks never dance because they are too shy or too self conscious, others simply never picked up the habit or are simply too reserved. I can remember picking up the dance habit early, back in the days of early rock n’ roll when the records were 45s and stacked on the players. In grade school, dancing was part of gym class. But it wasn’t until university that dancing really took hold at parties and to the great bands that  played in Berkeley and San Francisco in the 1960s. And now it is hard to say what I love the most, dancing, swimming, skiing, hiking, gardening, mountain biking or blogging!