Have you been stung yet?

Home » Have you been stung yet? 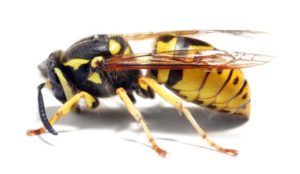 One of the joys of country living in the summer is enjoying a meal on the deck, but this year the wasps have driven many of us inside. It has been a bit more than a decade since the last major wasp summer and consequently I did some research to determine the factors that likely resulted in this year’s wasp population explosion in the Shuswap and throughout the southern interior.  Consultant and former B.C. Provincial Entomologist Hugh Philip provided many details that coincided with the information available on the Internet.

Weather is the key factor that determines the size of wasp populations. Only the wasp queens hibernate over the winter and when they emerge from the ground in the spring their first task is to find a suitable nesting place and lay their first eggs. The initial brood is key to the success of the colony, as the first four to seven workers take over maintenance that includes foraging, building new cells, feeding the larvae and insulating the nest.

Survival of the queens during the winter is directly related to winter temperatures and last winter was particularly mild. The early spring colonies are also dependent on the weather, as it is crucial that the first workers survive to ensure the hives grow and prosper. Dry, warm weather boosts the growth of the colonies as the workers can then spend less time concerned with thermoregulation and more time foraging.

A certain amount of moisture in the spring is also crucial, as wet conditions encourage the growth of caterpillars, which are a key food source for the wasps. This spring there was a warm spell at the end of April, which provided a boost to the new wasp colonies, and relatively dry weather in May and June further encouraged growth.

Despite their nasty stings, wasps are considered beneficial species because they prey on other insect pests, including flies, crickets, caterpillars and grasshoppers. There are primarily two types of yellow jackets in the Shuswap, the western wasp and the sandhill wasp. The western species builds nests in the ground and the sandhills build either aerial nests in trees or inside walls. 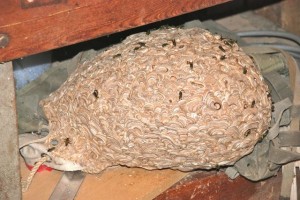 Recently another species, the European paper wasp, has been spreading west and was first seen in Salmon Arm in 2005. This species forms small aerial colonies and is becoming a worrisome pest for fruit growers and vineyards as it feeds primarily on cherries and grapes.

A fascinating characteristic of wasps is the feedback loop created by the larvae that produce a sweet secretion used by the workers for energy. Wasps often cause more problems towards the end of summer, as they are in search of sugars and carbohydrates to replace the declining amount of secretions when the colony switches over to producing drone (male) and new queen larvae that do not produce the secretions. The wasps here are now consuming our entire late crop of everbearing strawberries, hollowing out each one even before they are fully ripe.

There are many tips available to avoid attracting wasps such as avoiding wearing scents, or using hairspray and fragranced cosmetics. Traps are only useful if placed at least 12 metres away from where you plan to spend time outside, otherwise the traps will attract the wasps to you. Swatting can also increase numbers and if you do kill one, it produces a scent that attracts more.

We may indeed be forced to endure a greater number of high population wasp years as the climate warms. Warmer weather that lasts longer provides more opportunities for all insects that produce multiple populations to increase in numbers, including mosquitoes and serious pests such as aphids and mites. Given the rate at which the planet is warming, wasp stings may indeed become more common. So far this year, I have been stung three times, what about you?