“Coffee House scores a hit” read the headline of the December 20, 1978 Salmon Arm Observer, which went on to describe the first night in the new Shuswap Theatre in Tappen as a “resounding success,” at which “a new club has been launched.”  This event was the beginning of a golden era for musical entertainment in our community. Often the audiences were full for both open mikes that featured local talent and for entertainers from throughout Canada, including some international groups. 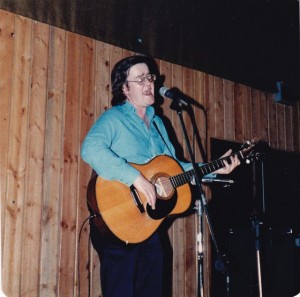 Sometimes the theatre venue, which was once the Tappen Women’s Institute Hall and later a restaurant, was not large enough, so the Gleneden Hall was booked. That is where Stringband first played, as did Bim (now Roy Forbes) and also where we danced the night away to Dan Rubin’s band, Flying Mountain.

The open mikes attracted musicians from as far away as Kamloops and Armstrong. Each act played a few songs and then usually during the second part of the evening there would be a rocking jam that was always well appreciated by the dancers in the audience.

It was at one or two of these evenings that four students from the high school played some great jazz, which was likely some of their first gigs. One of the young musicians, Richard Underhill, has become a Canadian jazz legend and his band, the Shuffle Demons, played at the first Roots and Blues Festival and will be at the festival again this year. When I asked Rich about that evening, he noted, “Actually you gave us an ‘inspirational’ quote that we still laugh about today. ‘Hey guys, sounds great, you’ll go near!’  Classic!”

By 1980, the Coffee House had become a well-appreciated component of Shuswap culture, thus we took the leap and formed a non-profit society with 40 members.  The first newsletter, in late February, sported a logo with a music staff rainbow in a Shuswap landscape scene designed by Julie Farr with help from Jake Jacobson. Meetings were often held during the potluck suppers that we enjoyed prior to most events.

In June, the society became officially registered with a constitution that included these purposes, “to promote the development and education of local musical talent, to establish an information exchange centre for musicians, society members and friends, to create a public awareness of local musical talent, and to provide musical and cultural entertainment from other parts of Canada and the world.”

The February, 1980 newsletter reported on other accomplishments including a healthy bank balance and a recently purchased six channel sound system that was also available for a low rental fee to local musicians. As well, the Coffee House had joined the Salmon Arm Arts Council and the Salmon Arm Cultural Foundation.  So many events were planned, that other venues were needed when Shuswap Theatre had a play in production.

Perhaps the most exciting announcement in the newsletter was that the Coffee House was working with the City of Salmon Arm’s 75th Birthday Committee to produce their first music festival in July at the Fall Fair grounds. Lumber had been donated by Federated Co-op to build a stage atop a donated truck frame. Unlike the festivals that began in 1992, this festival was to feature only local musicians. A form was included in the newsletter that also appeared as an advertisement in the Salmon Arm Observer for musicians to fill out if they were interested in performing at the festival.

The poster for the festival, which had free admission, listed 29 featured groups and single artists and boasted of “many, many more.” Some of the artists that played at the festival were David Allan, Dave Cowan, Jim Johnston, Doug Rawn, Mike and Pat MacDonnel, Jake Jacobson, Karen Beggs, and Jeanette Clement. T-shirts that featured the Coffee House logo were made and each performer received a free one. 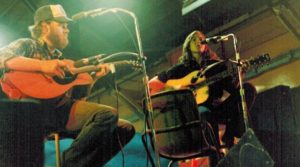 The September 1980 newsletter boasted of many successful dances, open mikes and concerts, with more to come, including the Mullberry Street Jazz Band, Ian Tamblyn and Ferron. However, a weekend of rain had forced the music festival inside the noisy arena for the first night and inside the cow barn on the second night. Despite the low turn-out and having to compete with other events at the weekend party, a large number of very talented musicians played, the performances were recorded, and two, new stars emerged, Deborah Klein and Valerie Dunn.