This year marks the 20th anniversary of the Salmon Arm Roots and Blues Festival, although one year was skipped just prior to the first year of the outdoor festival at the Fall Fair grounds. For many years the festival was just one project of the Salmon Arm Folk Music Society, which also sponsored concerts and dances throughout the year. Before the Folk Music Society there was the Shuswap Coffee House that sponsored dances, concerts and many open mic’s from 1976 until 1983, in a variety of venues.

In the early 1970s, evening coffee houses were organized as a project of the Salmon Arm Youth Centre, to provide activities for both young people and local musicians. These events were held at the Centre when it was in the former Armory and later in the old Legion building. A number of factors contributed to the emergence of the Shuswap Coffee House organization, including the building of the Youth Centre’s log building, the volunteer efforts by music enthusiasts, the role a local store provided as a cultural centre for the community and of course the participation of a growing number of local musicians.

Although I am not a musician, my love for music and my skills as a producer and a promoter were key in these early days after I helped build the log Youth Centre. I teamed up with banjo player extraordinaire Jake Jacobson, who was the proprietor of the Sweet Earth Natural Foods Store where music jams were a regular feature as soon as the store opened in 1971. And Jake was also a councilor at the Youth Centre.

When the new Youth Centre opened we had a permanent home for what we called the Shuswap Coffee House. Key to our early success was the help of three Lee Creek musicians, David Allan, Naomi Moriyama and Doug Rawn, who formed the group “Homegrown” that toured BC and Alberta and played in local venues. Doug hosted many of the early open mic evening coffee houses using their sound system. He remembers that as more people came to play, the fewer songs he had to play and eventually as the organization grew, he was able to bow out.

It was only natural for the Coffee House to eventually bring in traveling performers as feature acts. One of the first musicians from outside our community to perform was Juno winning blues artist, Willie P. Bennett. He wowed us with his incredible harmonica playing and he inspired us to bring more traveling talent to our community. Following this success, we brought in Ken Hamm, Pied Pear and many other groups to perform at the Coffee House.

From 1976 until 1980, the Coffee House was an ad hoc organization that ran on a shoestring budget, with homemade posters, hand built tables and borrowed chairs. Admission was only a few dollars and young people were encouraged to attend. The Sweet Earth Store served as the gathering place for musicians and music enthusiasts. This is where tickets were sold, notices were posted and occasional newsletters were available. Jake looked after the group’s finances and he was the technician who helped manage the sound system and built our first stage lighting system out of juice cans that we used for many years. 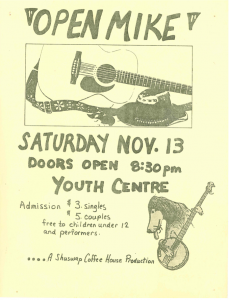 The Coffee House also benefited from the close proximity of another cultural icon, the Caravan Stage Company that was set up in during the off-season in Yankee Flats and then in Tappen in those early days. After the Bill Miner show, Ron Weihs, set up his “Ron the Fiddlers Amazing Juice Bar and School of the Arts” in the Sweet Earth store and for a few months organized the Coffee House, during which time he renamed it the “Endless Talent Co-op.” Ron also played with Sue Kyle and Allan Bates in a group they called Stringfire. Another well-loved group that emerged out of the Caravan to play at the Coffee House and elsewhere was “Three Dollar Bill,” made up of Caravan artistic director Nick Hutchinson, actor and now Lee Creek musician Jude Bastien and fiddler Richard Owings, who now plays in numerous Shuswap groups.

One of the disadvantages of the Youth Centre venue was that we could not serve beer, which was often requested by our clientele especially for dances. In 1978, Shuswap Theatre leased a former restaurant in Tappen, turning it into the Shuswap’s first live theatre facility. The Shuswap Coffee House also moved into the theatre, which soon became likely one of the best venues for live music that our community has every had. With its low ceiling, good acoustics and roomy stage, it was a perfect intimate location to hold so many fabulous events, including a concert by one of Canada’s foremost acts at that time, Stringband.

Another key factor that helped lead to Shuswap’s current reputation as a cultural centre also occurred in 1978 when Rick and Linda Tanaka moved to the Shuswap from Ontario, where he became the director at the Youth Centre. Rick remembers how they chose to move to the Shuswap because there was “a live theatre, a film society and a coffee house.” The next column will be about how our ad hoc group formed a society and organized a plethora of events including the Shuswap’s first music festival.