Jazzing up the Shuswap

Home » Jazzing up the Shuswap 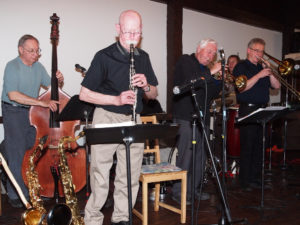 While the typical jazz music venue in most cities is either a hotel lounge or nightclub, in Salmon Arm jazz lovers flock to Nexus at the First United Church that has become a well-appreciated, 325-seat music venue for the community. We can all thank the Salmon Arm Jazz  Club for their dedication to hosting talented players from the community as well as from throughout Canada. 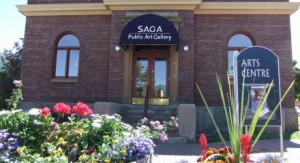 There has long been a vibrant music scene in the Shuswap, but it was not until three young local musicians, Jacob Verburg, Darrin Herting and Leon Power began holding weekly jams on Thursdays at the Salmon Arm Arts Centre Public Art Gallery in 2009 that jazz began to become part of the scene. In the first year, there were a variety of musical themes and players, always with an energetic amount of improvisation. 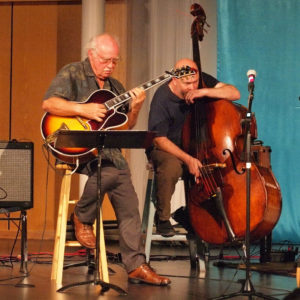 In 2010, when Jacob decided to take a break from organizing the shows, high school music teachers Sandy Cameron and Brian Pratt-Johnson, both well-appreciated and highly skilled players, took charge and the focus shifted to jazz. To ease the burden, the schedule was changed to twice a month and gradually more musicians came from Vernon, Kamloops and Kelowna to participate in the programs.

As the Jazz Club formed, decisions were made to ensure that admissions would be by donation and to avoid the bureaucracy of a registered society by keeping the club administration ad hoc. At the same time, they decided to ensure that all performers were paid fairly according to how far they travelled. Their organization structure worked so well that within two years there was no longer enough room at the Art Gallery for the size of the audience, and the venue shifted to the former Shuswap Chefs restaurant for two years until it closed. 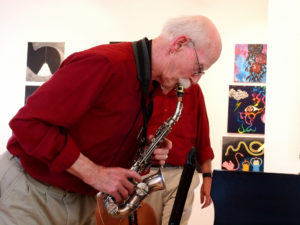 One cannot help but feel a sense of joyful pride when CBC Hot Air jazz program host Margaret Gallagher lists the cities where a featured band is playing on their tour and Salmon Arm is included. As Sandy Cameron explained, it was touring band members who found out about our Jazz Club and made the request to play here, which makes sense given that Salmon Arm is about halfway between Calgary and Vancouver. 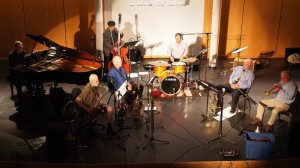 Jazz on the Nexus stage, photo by Clive Bryson

In 2016, the First United Church, which had in the past been used for concerts and music festivals, decided to create a unique venue for the community called “The Nexus at First” as a way to create an additional revenue stream as well as increase utilization of their facility. It was a perfect fit for the Jazz Club and as long time volunteer Stan Zobac explained, the church “bends over backwards” to provide warm and generous support.

When Sandy left the community to live in Victoria for a few years, skilled guitarist Jordan Dick took over as director and continues in this role today. Audience sizes are typically in the range of 75 to 125, but often the crowds are greater when the club is hosting a band that is on tour. Some of the favourite musicians include bassist Bernie Addington from Kelowna and from Vancouver, guitarist Bill Coon and saxophonist Cory Weeds, who also ran the famous Jazz Cellar. 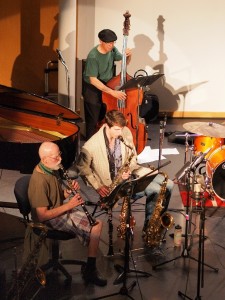 There are an estimated 50 jazz players in the Shuswap according to Sandy, and many shows feature a group of them in a quartet or more. Typically, the group only needs only one rehearsal to go over the selections and the arrangements. What makes jazz so enjoyable for aficionados is the improvisation, which usually occurs during the solos for each of the players. 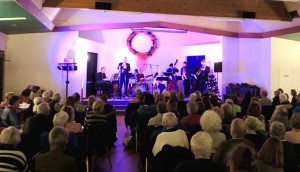 One of the highlights of the season is the annual Christmas show and this year was no exception with a sold-out crowd filling the auditorium. For most of the program, one only had a sense that it was holiday

music during the first few minutes of each song, as the arrangements were fluid and creative, with many of the solos and the vocals by Andrea Roberts and her son Jonas provoking a sense of joy that fit the season. 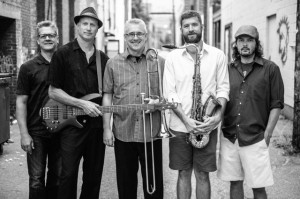 The line-up for January is impressive. On January 10th the show features a sextet led by Revelstoke trombonist Bob Rogers and on January 24th the program will feature “Soul Station – The Music of Hank Mobley” with an Okanagan quartet that includes Bernie Addington (learn more at jazzsalmonarm.com).  Be there or be square!

Kamloops is over five times the size of Salmon Arm and yet it does not have a jazz club, although jazz groups do play occasionally in a few venues. So we are very fortunate to have an active jazz scene in the Shuswap, where there are also many other very active volunteer organizations that provide a rich diversity of art, cultural, recreational and sport activities.

Perhaps some of the factors behind the success, are the amazing school music program and the music stores that have instructors and many students. A number of local students have gone on to develop music careers, such as Shuffle Demons founder, Richard Underhill, pianist John Rasmussen, and more recently, Jake McIntyre-Paul, who is studying at Capilano College. Some have returned and are now school music teachers like Brook Roberts.

There is a wide variety of music at the Jazz Club, both at any one night or at different shows. Most often performed are the jazz standards, but one can also hear funk, Latin, Bebop, swing, and even rock. Another favourite genre are Django Reinhardt and Stephane Grappelli tunes. In March, there will be a Choro band, The Chorogues, that plays Brazilian jazz.