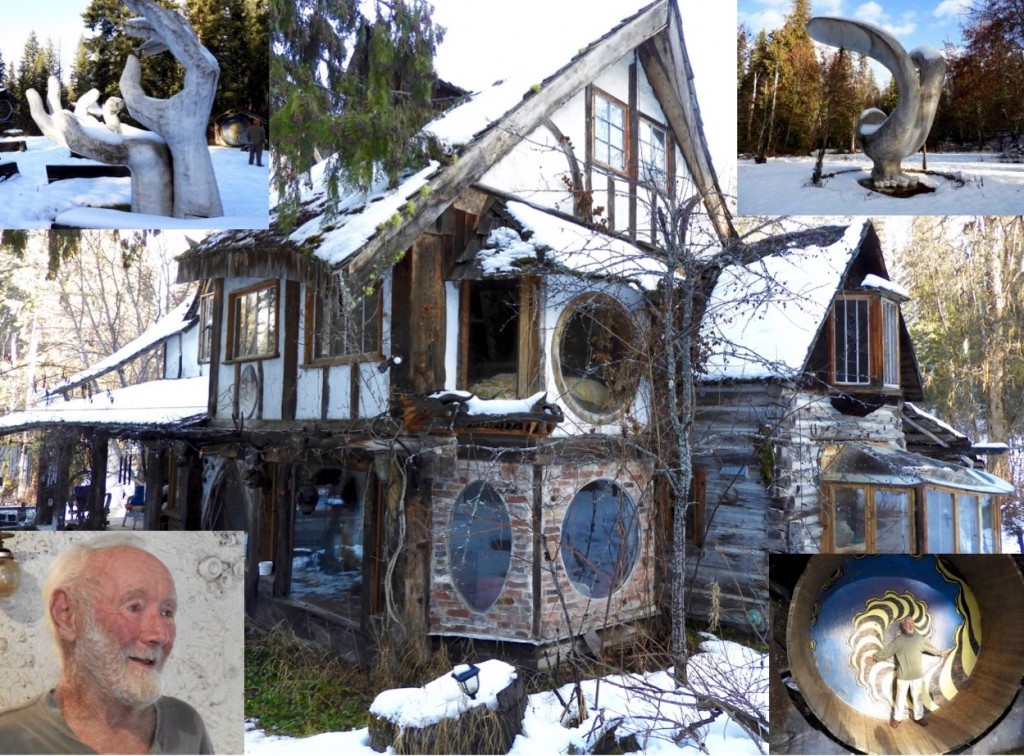 In the late 1980s, famed CBC host Vicki Gabereau did a series of interviews called the “Best Guest Quest” with relatively unknown people who deserved fame. Many of Chase artist Laurie Payne’s friends listened intensely when he was on the show.  We were not disappointed as Laurie entertained us as well as listeners across Canada with stories about his colourful life, from growing up during the Second World War in rural Great Britain to how he chose to settle in a run-down farm above Turtle Valley in the mid-1960s. 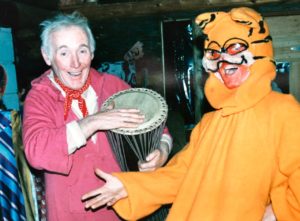 Drumming has always been big for Laurie

There is no shortage of labels for Laurie Payne; he is a potter, a visual artist, a poet, an author, a playwright, a sculptor, a fine woodworker, an environmentalist, and a controversial advocate for men’s rights. Vicki Gabereau had no doubt been briefed about his accomplishments, but rather than focus on his achievements, she was more interested in uncovering his past and how he came to live a non-conformist life in rural southern British Columbia. 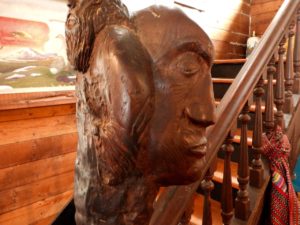 Laurie carved this back in his London days

In the interview, Laurie described what it was like to grow up during the war under the fear of Nazi bombing raids with little adult supervision. After graduating high school, he was conscripted to fight in Korea, where unfortunately he did not avoid combat but gained some reprieve by working as a radio operator and sometimes the driver for a colonel. After the war, Laurie worked in London and then moved to Australia to join his mother and sister, where he met Robyn Thornton, the future mother of three of his children. He hung out with the beatnik crowd and then decided to join them at Sydney University where he majored in English and philosophy. 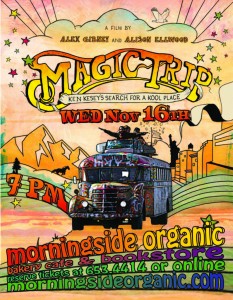 After gaining his degree with top marks, he received a fellowship to do creative writing studies at Stanford in California. It did not take him long to meet up with other like minded radical thinkers and he soon found himself at famous counter-culture author Ken Kesey’s sprawling ranch house in the Palo Alto hills where he and Robyn took their first hit of LSD, which was still legal then. He never looked back. 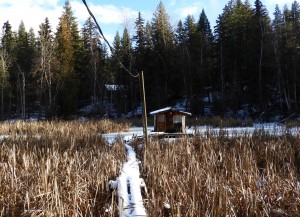 After two years in the U.S., they were ready for change and headed up to Vancouver. With their small savings they decided to look for land and chose to search for a rural property near Kamloops. They fell in love with an abandoned homestead and managed to convince the owner to sub-divide off 40-acres. After removing a massive mound of pack rat droppings from the old cabin and house, Laurie set up a studio to make pottery and jewelry, while Robyn taught high school in North Kamloops. 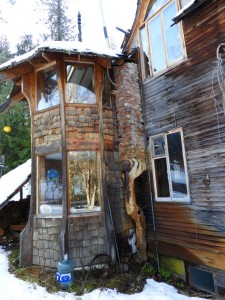 The chimney is held up by a “hand”

They also opened a shop on Victoria St. called “Where it’s at,” to sell their crafts along with posters and some paraphernalia. After less than a year in Kamloops they moved to their property in 1968 with their baby son, where they endured many years without power, phone or running water. When Laurie was not away doing carpentry work, he was busy renovating the house and adding more outbuildings using impressive, creative designs. 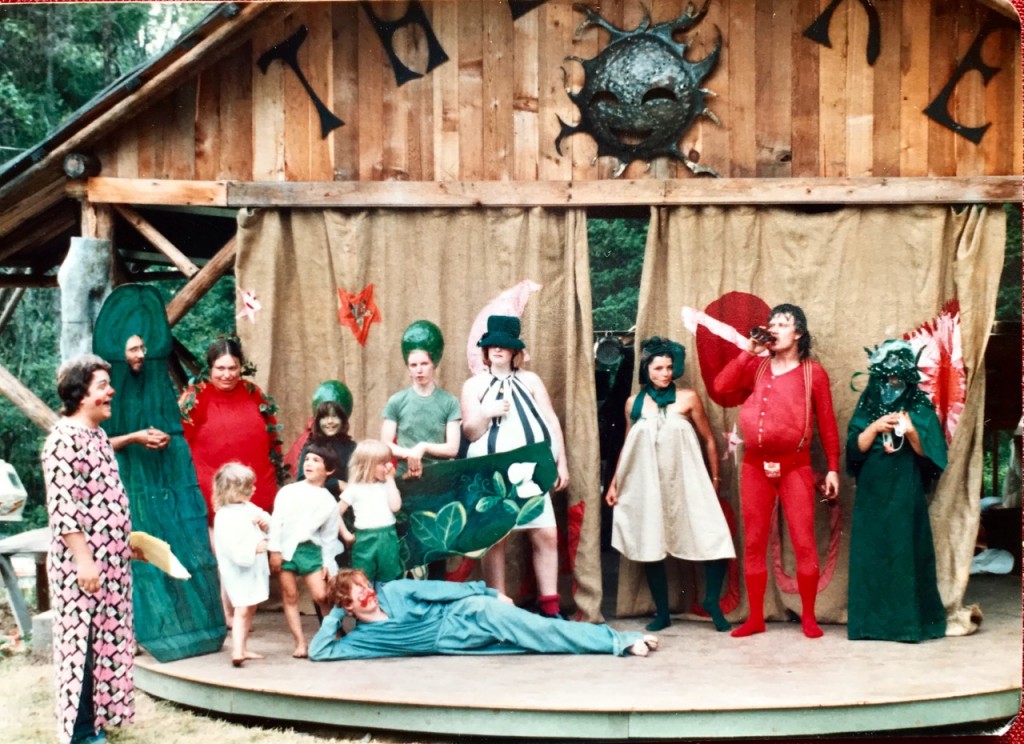 In 1984, the Solstice skit featured vegetables

There was also much fun to be had at the Payne farm, with yearly celebrations that attracted many local artists, musicians and theatre folk. The summer 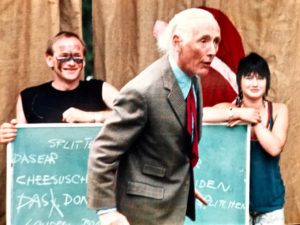 solstice was the major event for over four decades, with skits and bands playing on the Mumbo Theatre stage, feasts and the ritual walk. Laurie built two massive 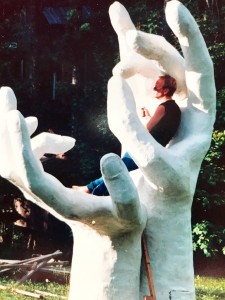 ferro-cement sculptures to adorn the property; one is a giant set of hands and the other a set of wings on feet. There is also a giant hamster wheel that a person can run inside of while taking care not to lose their balance.

During the early 1970s, the spring equinox was celebrated in the streets of Chase with a snowball battle between the forces of summer and winter followed by a potluck and dance. In the mid-1970s, Laurie managed to get a federal grant to build a fountain in a small park close to downtown. The fountain had to go after it was vandalized, but the bowl is still there and filled with flowers every summer. 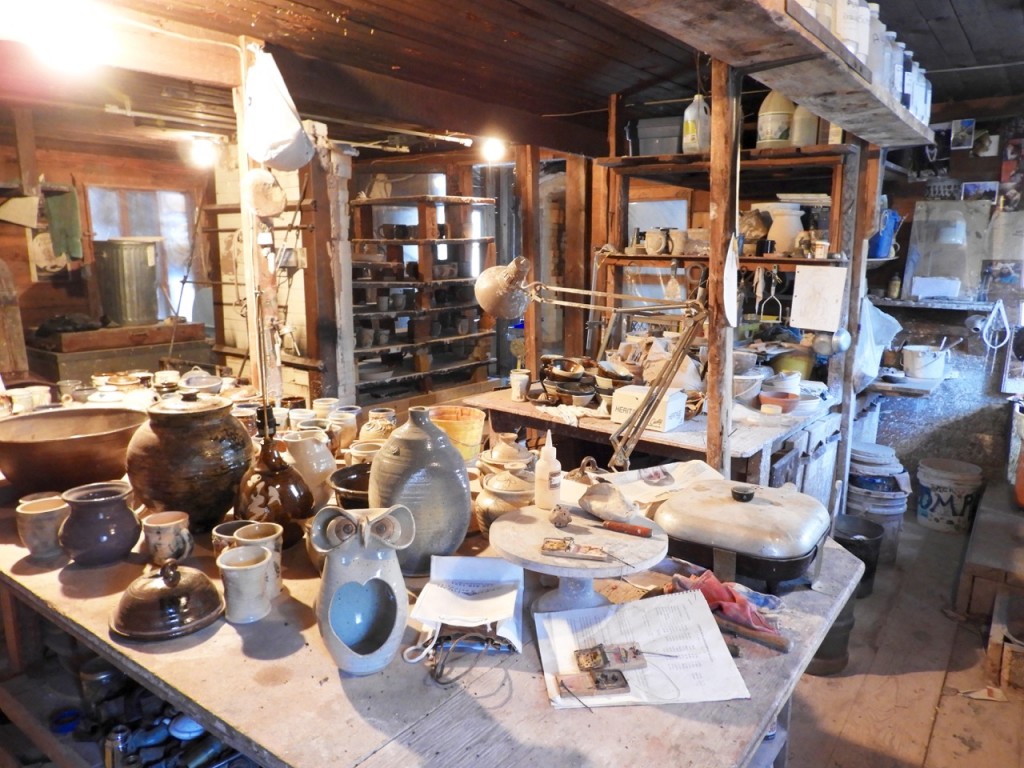 Now at the age of 86, Laurie is moving into the concluding stages of his life and this may be the last year he makes his annual winter migration to Thailand to escape the cold and snow. His pottery studio is still filled with amazing pots, many with sculpted faces and shapes. 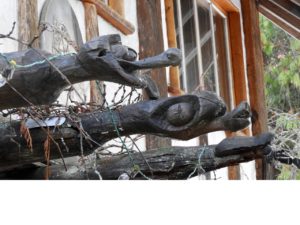 The carved gargoyles have survived the weather outside the house that looks like it belongs in a movie set, and inside his paintings and etchings still line the walls. More can be learned about this remarkable Renaissance 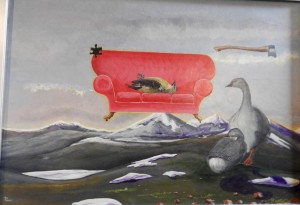 man by reading his novel, Shawandasse, his children’s book, Mush and the Big Blue Flower or his memoir, Child of the River. 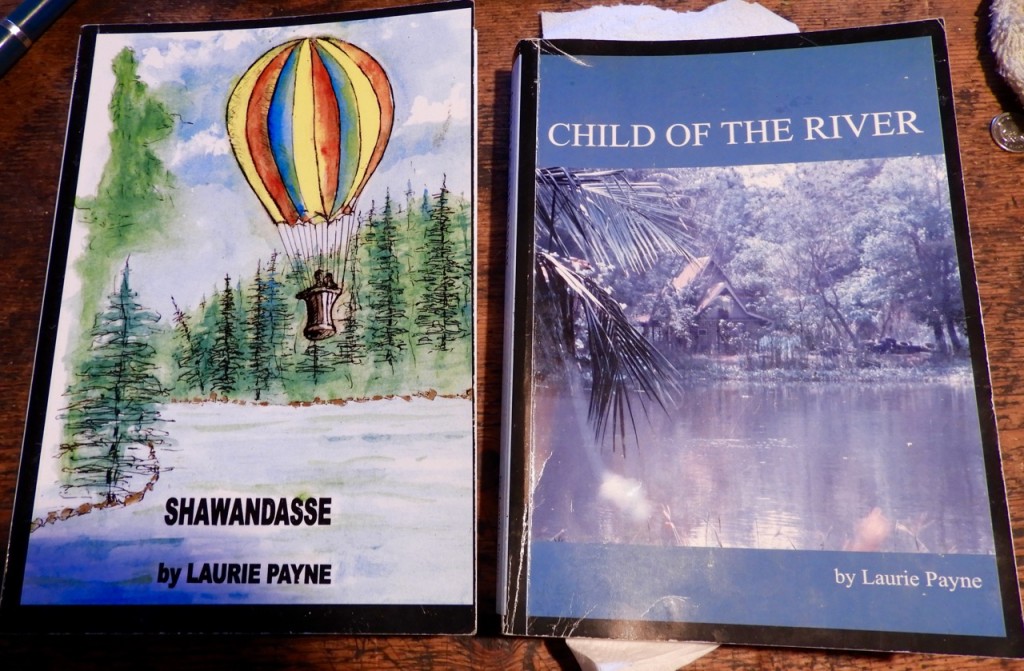 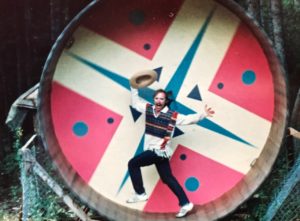 The author in Laurie’s wheel at the 1984 Solstice

Laurie and his then wife Robyn were some of the first people we met after moving to the North Shuswap in 1969. Their century old farmhouse was where the hippie party scene was from the sixties until this century. We enjoyed many fun, music filled times there with friends and neighbours. 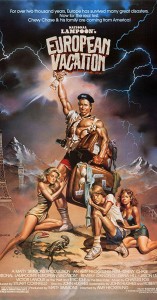 One summer in circa 1971, two gals joined the ad-hoc band and that fall they played in the back of my old pick-up truck in the Chase parade earning us second prize, which we spent buying rounds of beer at the Underwood Pub. One of these gals later moved to Hollywood where she became a big star – Beverly D’angelo! 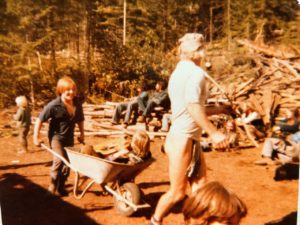 Laurie at an early Harvest Festival, circa 1976

Laurie would always be the most outlandish character at any of our get-togethers. Whether he was bringing a three-legged roast chicken to a potluck, dressing up in only a loin cloth for our annual prom when many of us we wearing ties and gowns, or ensuring that everyone in the room knew he was there; Laurie made sure he was the centre of attention. 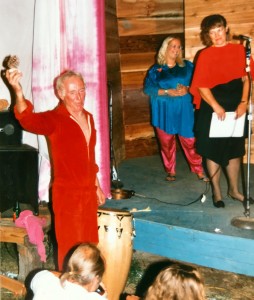 There was also a certain level of homegrown mysticism surrounding his scene, as during the Solstice ritual walk, everyone picked up and set down their grudge rock  at thirteen stations manned by different spirits. The rock would eventually be added to the cairn at the end of the journey and your grudges would be gone for another year.

A key celebration in our Lee Creek Community was the annual Harvest Festival that first began in 1976 and lasted until the year 2000. There were volleyball games, children’s games and parade, music jams and the always-popular skits. In 1985, Laurie took the skit to another level with a full-length show, called Musical Chairs. 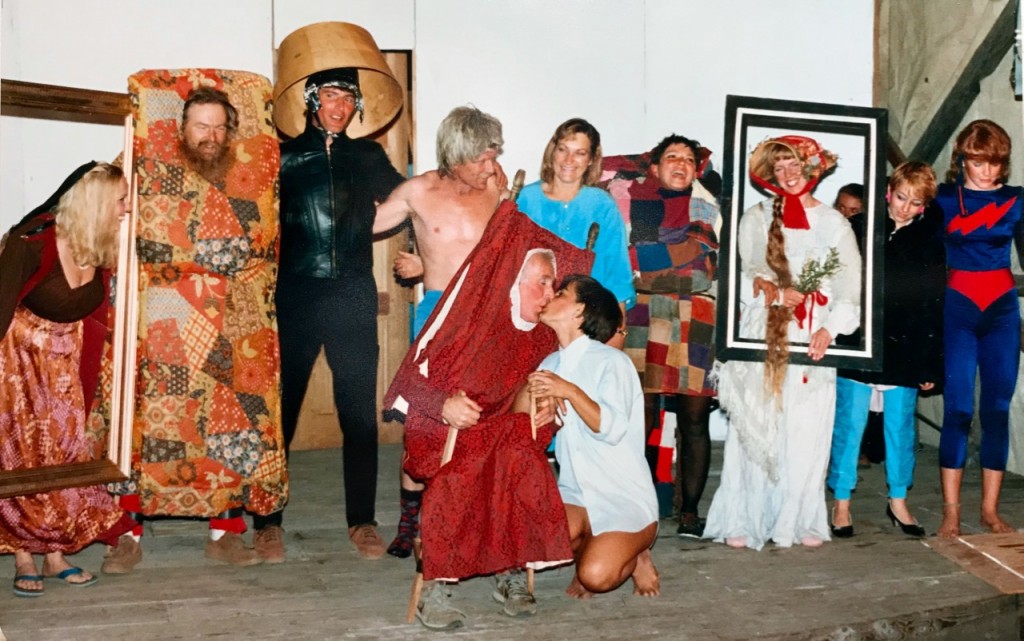 Actors portrayed furniture in the production, in which the lady of the house fell in love with her chair, creating jealousy amongst the other furniture. It was such a success, that Laurie managed to bring the show to the Sagebrush Theatre in Kamloops. 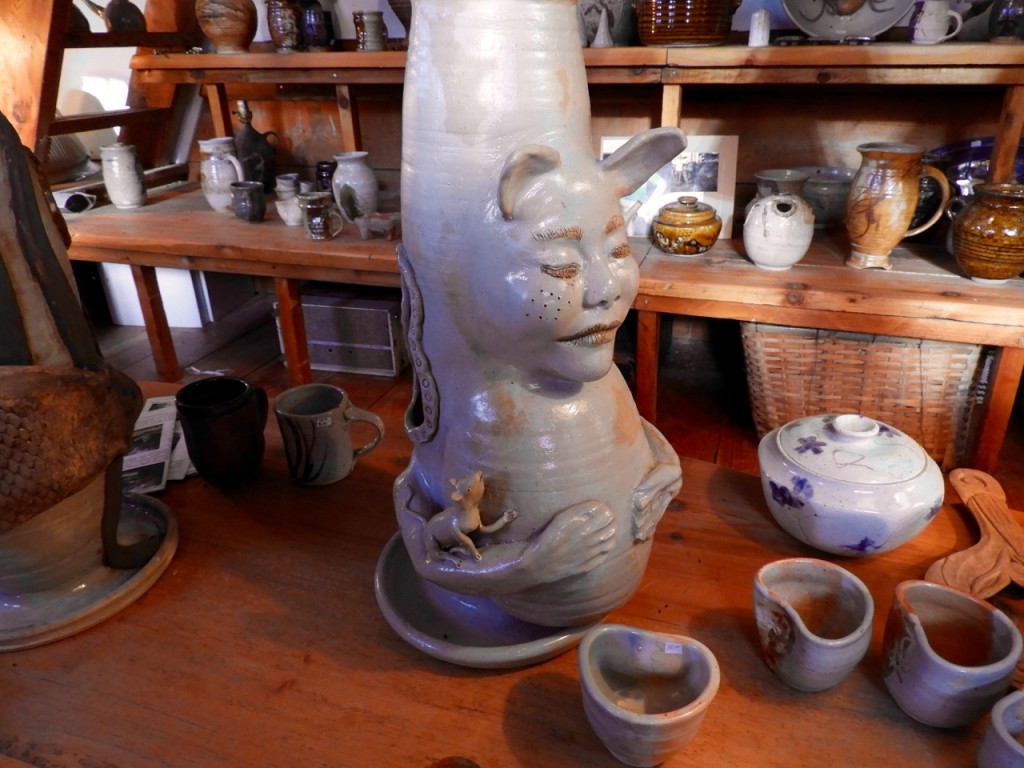 One reason for writing this article is that Laurie deserves greater recognition, as he is certainly a one-of-a-kind, talented artist and his work could inspire others. Perhaps one day, there could be a showing of his artwork in a local gallery that could include photos of his large sculptures, his house and his woodwork along with his pottery, paintings and etchings. 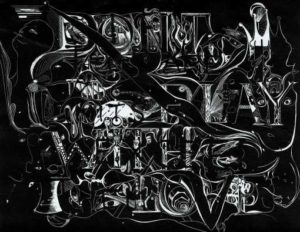 Laurie has an online blog that feature some of his creative writing. Visit it here: LAURIE PAYNE’S BLOG

Here is an excerpt from Cow-joy and Wikileaks:

I saw my own entrapment in rush hour traffic as the spiritual manifestation of a great, terrible stampede, of a spooked species; all of them, billions, leaping out of their beds, gobbling coffee, and roaring down the highways to workplaces to pass their lives in utterly meaningless activities. I saw the factories like that; and I saw the armaments industries, and the whole great maddened war machine, a Blakean Terror crushing all and everyone before it. I recognized herd-madness at its apogee; its mindless brutality and murderous rage. And I recognized that nothing could halt this stampede except a powerful revelation—a mirror held up to us all to show us in our primitive and mindless madness.