Salmon Arm – Big ideas for a city with big rewards 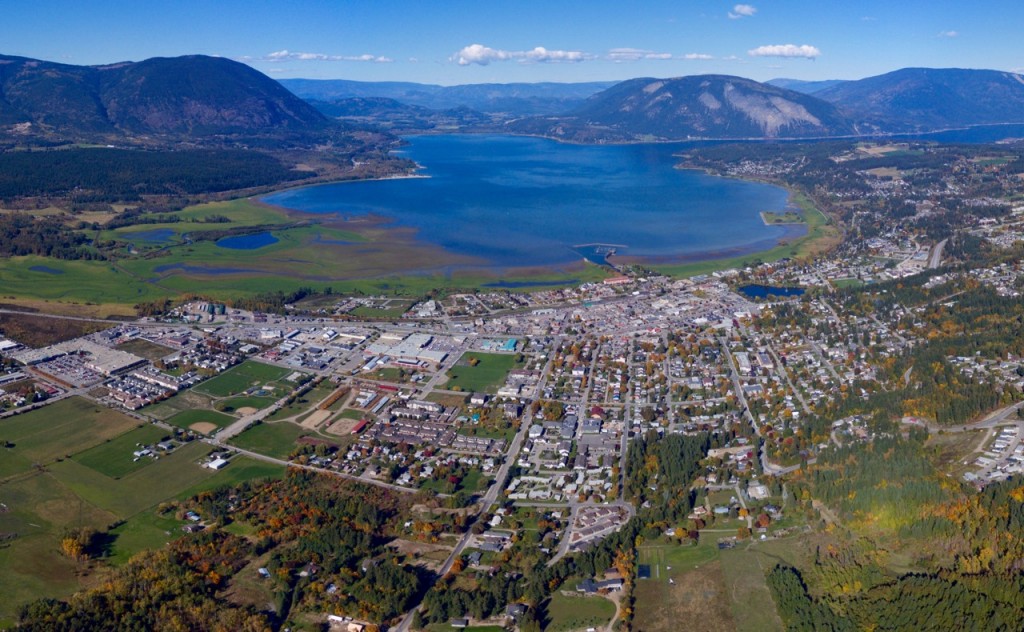 The result of the recent branding project for Salmon Arm, “Small City, Big Ideas,” engenders a vibrant future for the community filled with the promise of innovative, high tech businesses as well as exciting, new cultural and recreational opportunities. Given that the population last year skyrocketed with 9.3 percent growth that included many young families, another brand that might make even more sense to describe the community that exists now would be “Small City, Big Rewards. 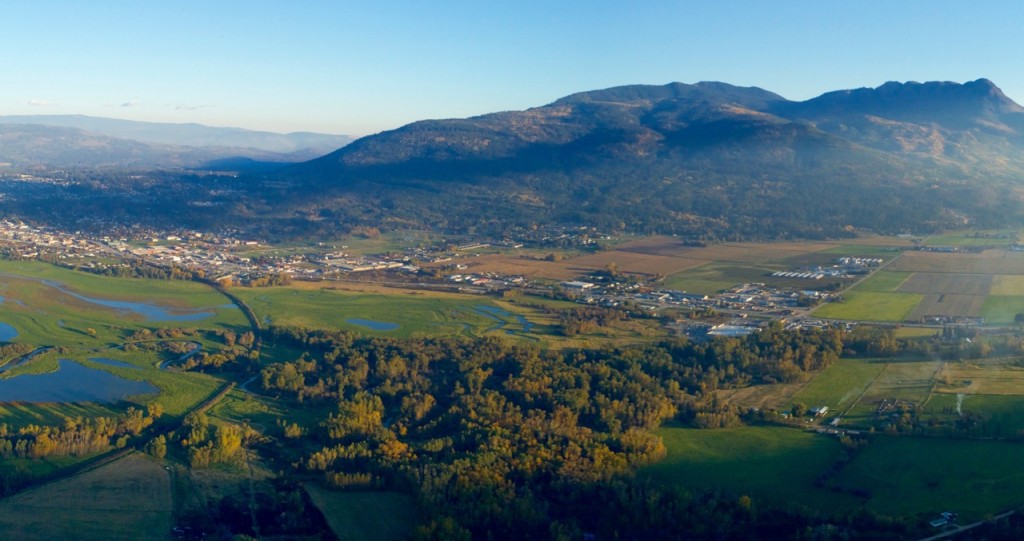 While there are many advantages to living in larger communities, there are also many drawbacks such as more traffic, more crime, more pollution and a more expensive cost of living. The many rewards of living in Salmon Arm include its friendly atmosphere; its well maintained parks, trails and playing fields; its many volunteer organizations; its growing manufacturing base; its lively cultural scene; its rich agricultural heritage; its ideal transportation corridor location; its positive relationship with the Secwepemc people who have lived here since time immemorial; and perhaps best of all, its magnificent forested setting at the base of picturesque and sacred Mount Ida and adjacent to Shuswap Lake with stunning vistas of hills, rocky bluffs and valleys. 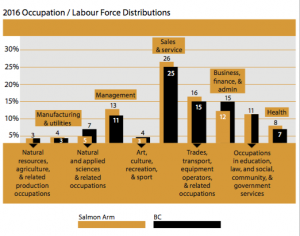 Given that Salmon Arm is the commercial and cultural centre for the Shuswap region, residents from most other communities benefit from the city’s remarkable, ongoing growth. While the latest census data indicates government transfers including retirement income are a key economic driver (see below), other sectors are gaining in significance including construction, manufacturing and the growing high tech industry that now supports upwards of 700 jobs. 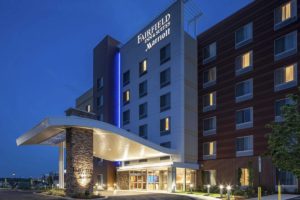 One clear indicator of the growth, besides the increasing population is the value and number of new building permits, with last year’s total of nearly $67-million that includes 164 new family units that is far above the 17-year average of 113 units. Topping the chart is the new 95-room, $10.7-million Marriott Hotel that is now under construction.

It was unfortunate to see the Canoe Forest Products sawmill close leaving only the plywood plant to provide jobs, however the city’s industrial park has clearly taken up the slack. At last count (in 2009) there were 73 businesses employing nearly 800 workers. One of the most innovative and unique companies is Dinoflex, which manufactures recycled rubber products. It recently announced a $3.5-million expansion and upgrade that will bring yet more jobs and further boost the local economy. 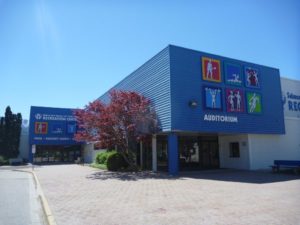 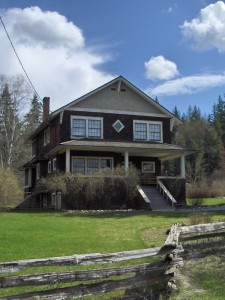 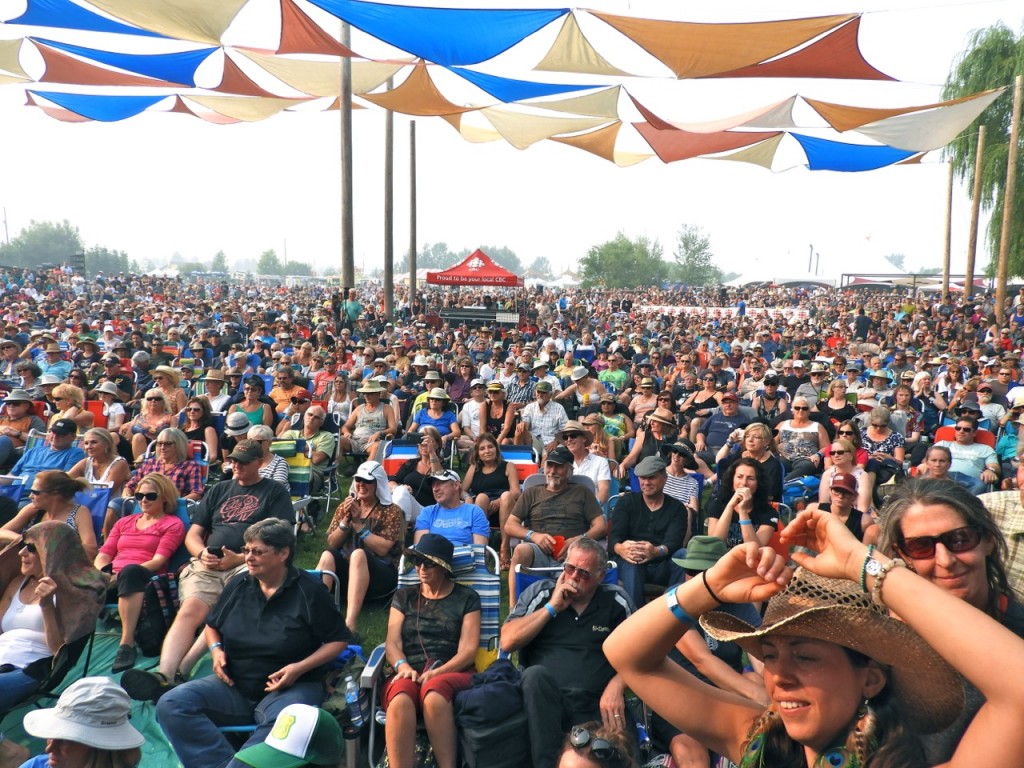 Salmon Arm’s crown jewel is the annual Roots and Blues Festival which attracts an audience from far and wide, some of whom decide to relocate in the Shuswap after experiencing all that our region has to offer. There are many other events that bring residents and visitors together including the summer outdoor music series Wednesdays at the Wharf, the Shuswap Music Festival, the Fall Fair, mountain bike races, cross-country ski races at Larch Hills, and ball tournaments. 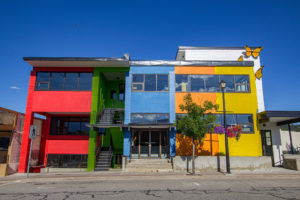 While there are a multitude of advantages to living in Salmon Arm, there is certainly room for improvement as the Big Ideas brand suggests. The new Innovation Centre and Makerspace is a major new positive development that now needs to be fully utilized. Two big ideas that would certainly improve the city would be a much larger post-secondary institution closer to the town centre as has been proposed and a cultural centre that would include a good-sized performing arts venue. The only other much needed improvement would be for the city to have more of a night life, as one can find in other smaller communities like Revelstoke, Nelson, and even Ashton Creek, but this will take time and a larger population living downtown.

While the labour force distribution graph above show how retail and service employs the most people, it is not actually an economic driver as stores and services either recirculate money or move it outside the community. True economic drivers are those sectors that bring new money into a community, such as manufacturing, government jobs and agriculture.

In actuality, retirement income is most likely the major driver of the Salmon Arm economy. According to the 2016 census data, 16 percent of the population over the age of 15 receives transfer payments, which includes pensions, government assistance, employment insurance, tax credits, etc. The data also shows a 23.4 percent gap between employment income and market income, which includes investment income and retirement income. Add the the gap (23.4%) and the transfer payments (16%) minus the income other than related to retirement and approximately one-third of all the income in Salmon Arm comes from retirement funds, which makes sense because nearly one-third of the City’s total population over the age of 15 is older than 65.

The ideal would be for more high tech and manufacturing businesses into the city along with more young families, as that would be the best way to boost the economy and create growth. However, encouraging more boomers to retire in Salmon arm would help as well, as for every group of seniors (perhaps 3-4 couples) another job would be created in the retail/service sector. Given that in the next ten years there will be a tsunami of boomers retiring in the lower mainland, the Shuswap would be one of the best places for them to relocate, as the Okanagan is getting so overcrowded.

Plus, many of the amenities that seniors want are the same that younger families want and as explained in the column, Salmon Arm has so much to offer. About all we lack is downhill skiing, but then Silver Star and Revelstoke are not far away. It could noted that the one organization that is doing the most to increase recreational opportunities that promote growth is the Shuswap Trail Alliance.

A Facebook comment to the post, “Too bad there’s nowhere to live.” reveals a gap in the column. and yes one major much needed improvement would be more housing, especially affordable housing. Fortunately, a project has been announced, but the details have yet to be revealed. The city is also encouraging secondary suites, but no doubt the more, the better. Given there is so much agricultural land in the city, it would be good if the ALR would allow for for people who want to assist with the farming and perhaps have a second job in the city. Co-op housing would be another solution that is working well in other jurisdictions.