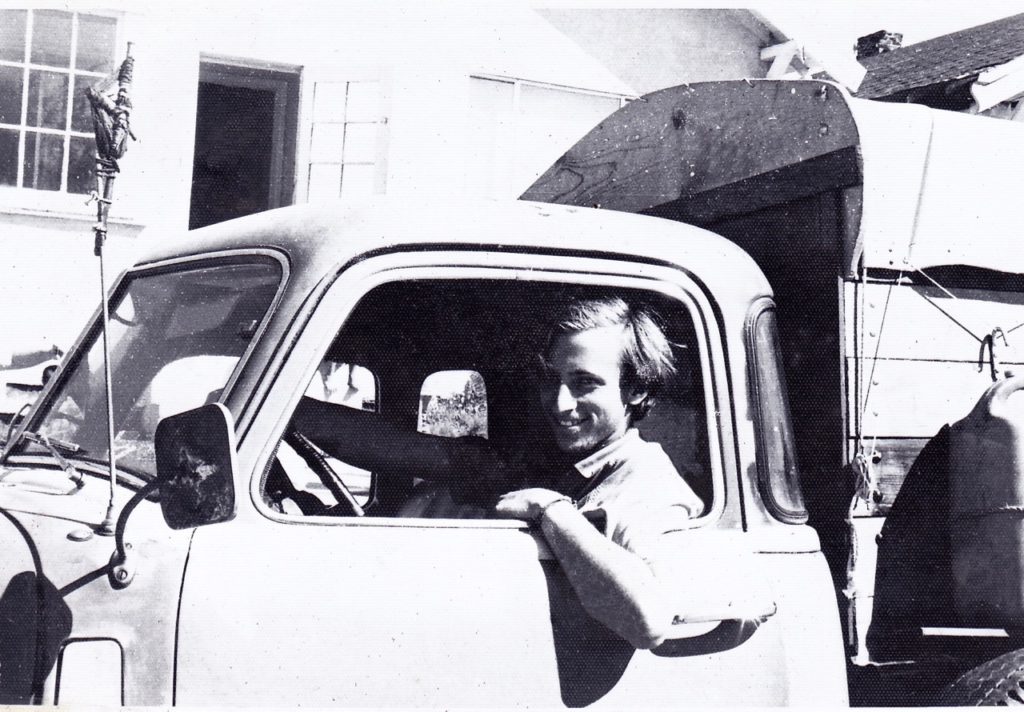 At the wheel of “Lucy” the day we left Berkeley, California 50 years ago, note the ‘Gods Eye’ on the aerial

April 2019 marks a milestone in my life, as 50 years ago I crossed the border as a landed immigrant to begin a new life on our treed property above Shuswap Lake. The border guards must have chuckled when they saw us arrive in our 20-year old pick-up truck with my homemade camper that resembled a Conestoga wagon, two dogs, a cat and homesteading tools.

Here is an excerpt from a poem, At the Border, I wrote one year later:

Here I stand head in hand

I turn my face to the green mountains

Leaving behind that land filled with

Unable to make it with those people

I despised their evil ways

War over there, everywhere 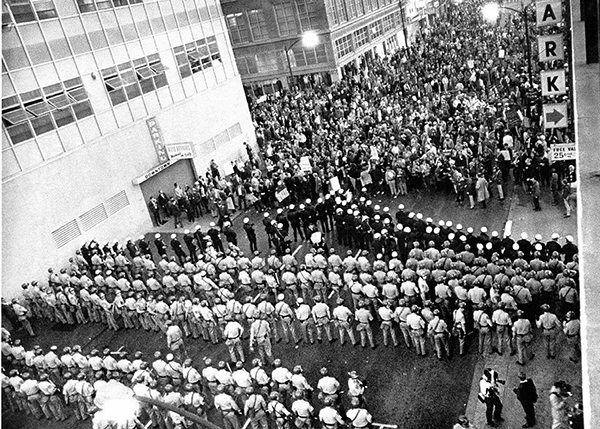 I helped organize this 1967 anti-war demonstration in front of the Induction Center in Oakland, California

If it had not been for the illegal and immoral Vietnam War, I might now be at the end of a university research and teaching career, but there were only two options in 1969, prison or Canada. We were also part of the “back-to-the-land” movement, well primed by reading the Mother Earth News and the Whole Earth Catalogue. 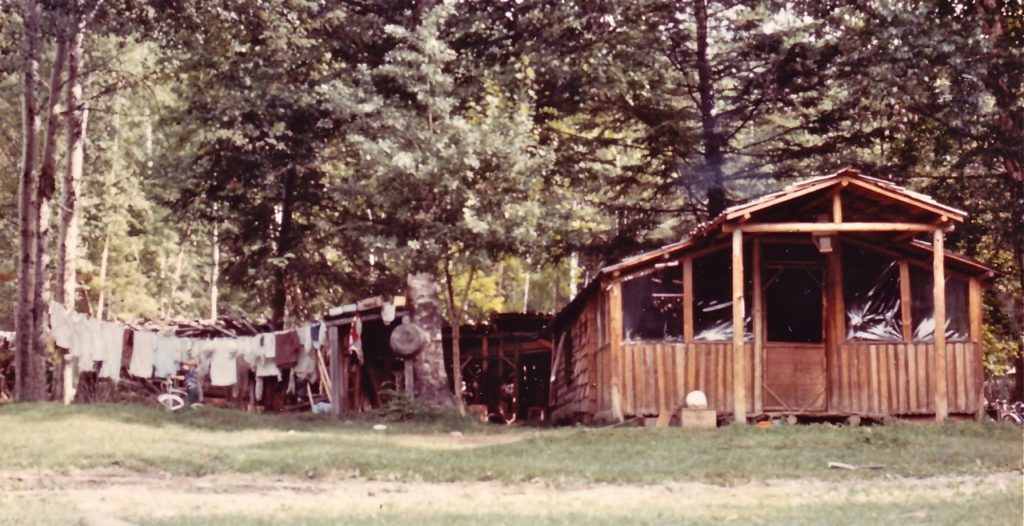 We built an addition on to our rustic log cabin for the kitchen. It had plastic windows for the first few years, circa 1972

Once we arrived at our small rustic, log cabin, it did not take long before the harsh realities of homesteading, starting a family and earning a living began to take the sheen off our ‘living in the wilderness’ fantasies. After making some crude furniture, building an outhouse and busting sod to make a garden in the small clearing in front of the cabin, I went to work at the local sawmill in order for us to survive. 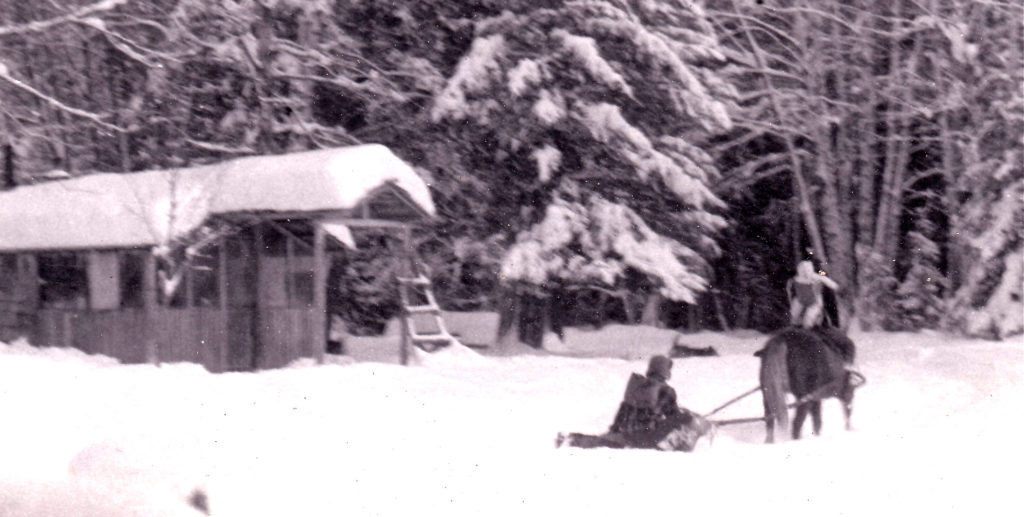 Many of our hardships were self-imposed, including cutting firewood by hand with a bucksaw or crosscut saw. After four years, we had three children, two horses, goats, sheep and chickens. The winters tested us the most, melting snow for washing, hauling drinking water from the well, trying to keep warm with plastic on the windows, and using our horse to traverse the two mile long snow covered logging road to our vehicle for trips to town. 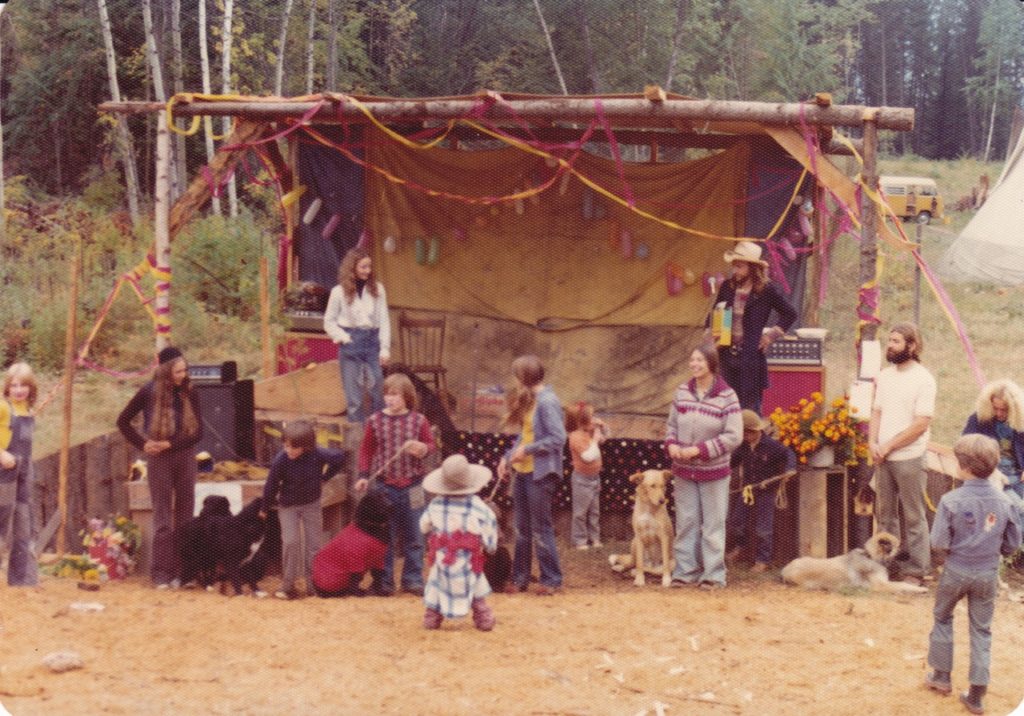 I was an emcee for our community’s first “Harvest Festival”  in 1976, which included a dog show

Overshadowing the hardships, were the many fun times we had as more folks joined us on the hillside to homestead too. There were work parties and many get-togethers with homemade music and much laughter. We went on trail rides, had feasts and spent many a late summer afternoon at the beach. We had the most fun at our annual festivals complete with parades, kids games, volleyball, dancing and skits.

1973 trail ride to the top of Crowfoot Mountain 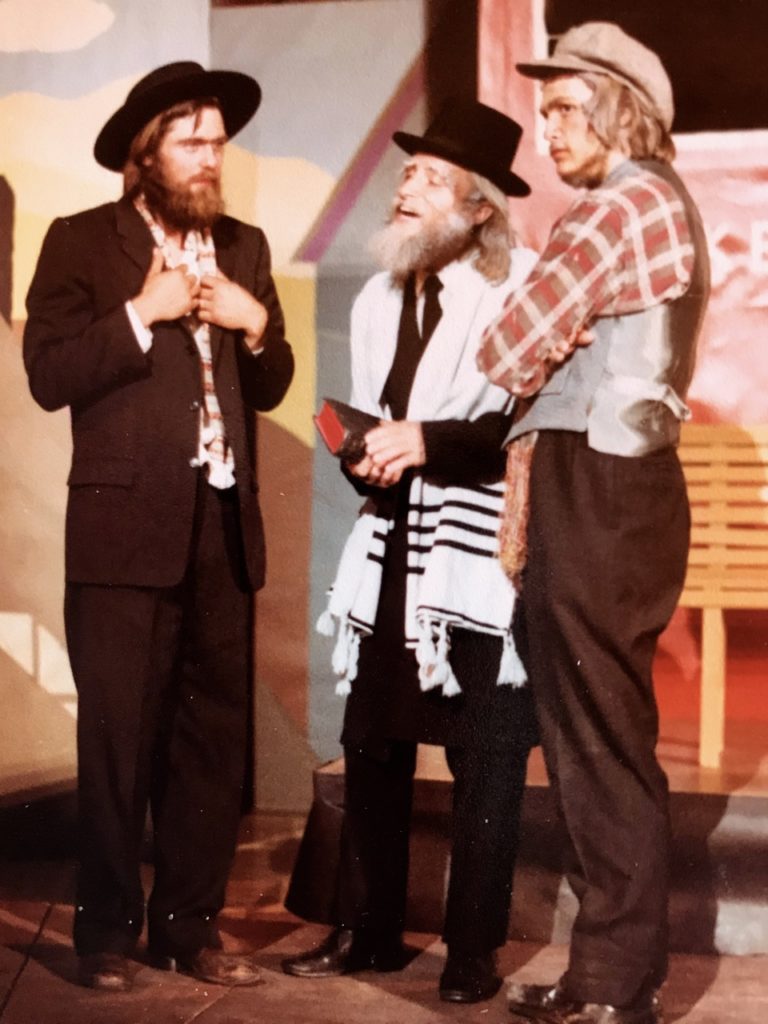 The passion that led me to the Shuswap carried on from the local community that developed on our hillside to many unique projects that served the larger community. From music promotion, to theatre, to local history writing and research, to decades of environmental advocacy and to writing and helping publish the first book about the Shuswap region.

Working the land has been a constant over the 50 years, in tune with the seasons. Growing organic fruit and vegetables helps keep us and some friends well fed all year long, thanks, in part, to our root cellar. In some ways, the vision in the end of my 1970 poem, Earth Sausage, has come to fruition:

In the now isolated country

Where the creeks still run true and the deer abound

A race of people

With the patient balanced rhythm that nature intended

They raise their crops and children together

Play music, dance, and sing together

And mould the dirt, clay and wood together

To build a together space in harmony with the land 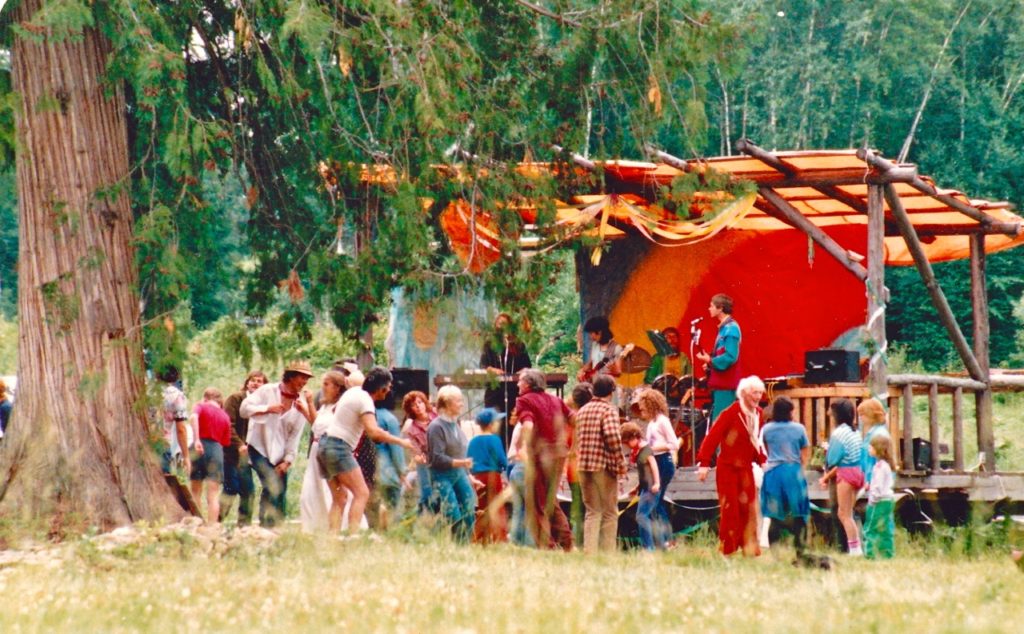 The Lee Creek community’s garden party in the early 1980s with the gang dancing to our local band, “Homegrown”

The smile on my face on the day we left Berkeley shows the joy I felt about leaving the U.S. to begin a new life in the wilds of Canada. Yet, underlying that smile, was the fear and stress of giving up a life of comforts to begin a new life in a world I knew very little about that would include hardships, along with the difficult physical work needed just to survive. 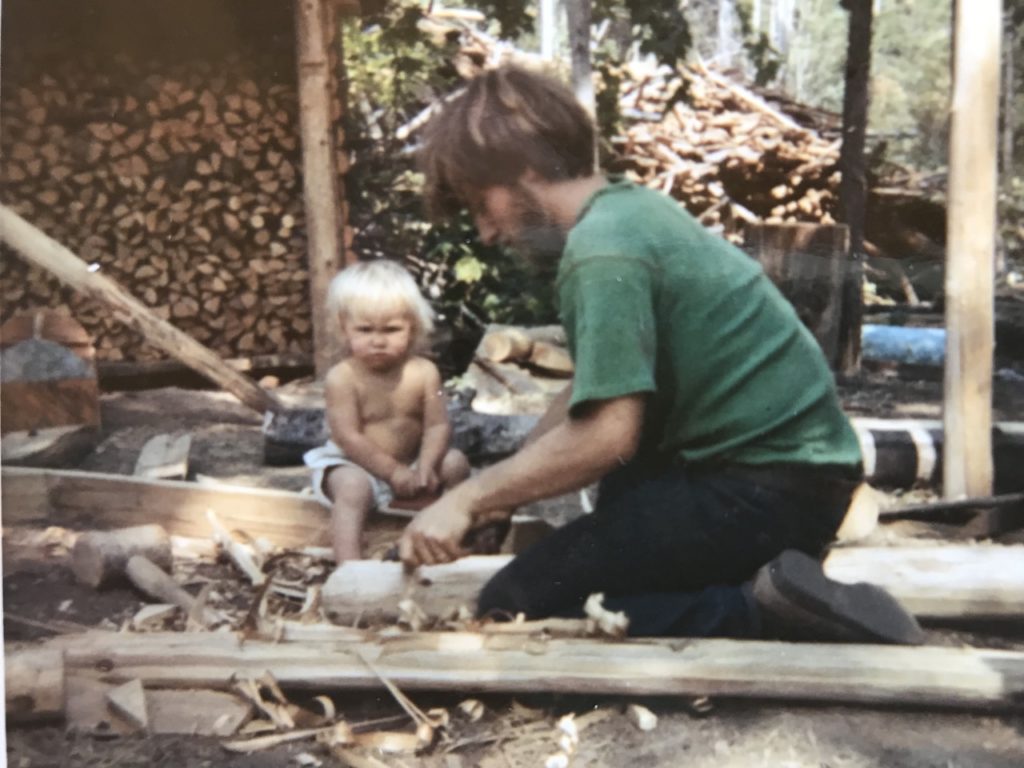 In the late 1960s and the 1970s, many other young, urban “hippies” would also attempt to live in the country, either in communes or on their own. While some were successful, many others were not and ended up moving back to towns and cities to live a more normal lifestyle. 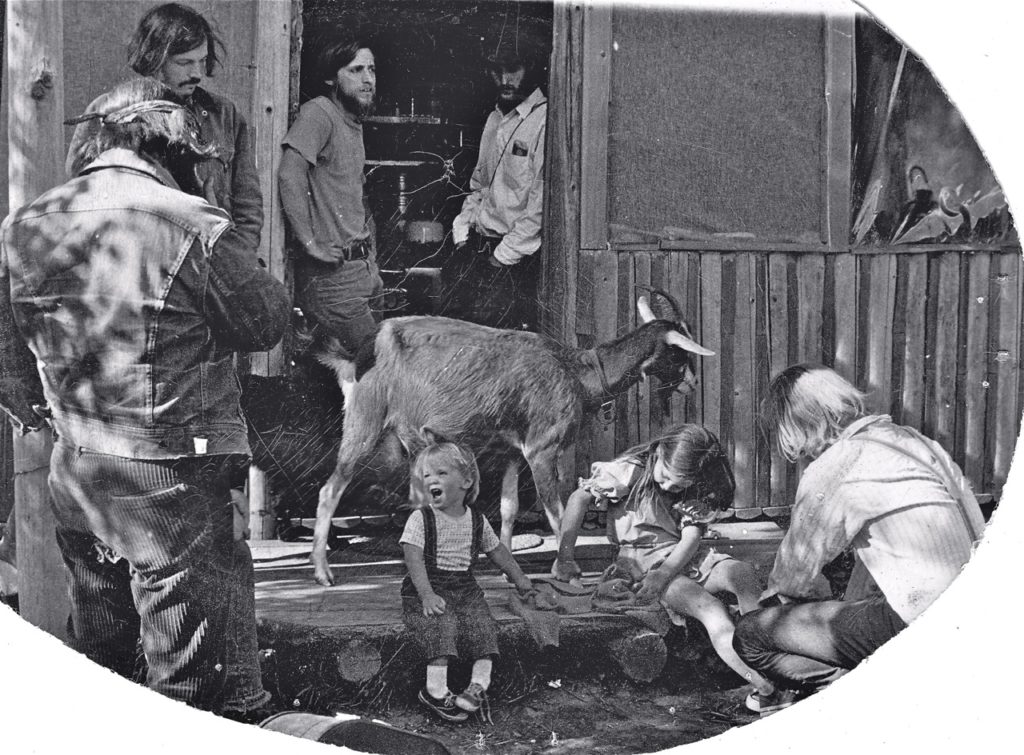 A typical scene in our lives, circa 1971

There are many reasons why I am still living on this property for the past fifty years, especially the support from my loving partner and wife, Kathi, who joined me here 39, years ago. As well, what began as five of us moving here from the U.S. (my former wife, her brother and his wife, and a close friend who only lasted five years before leaving due to his dislike of the winters), grew to a much larger group of back-to-the landers. We jokingly referred to the six families who homesteaded 80 acres above us as the “upper commune,” while our group living on our 80 acres was the “lower commune.” 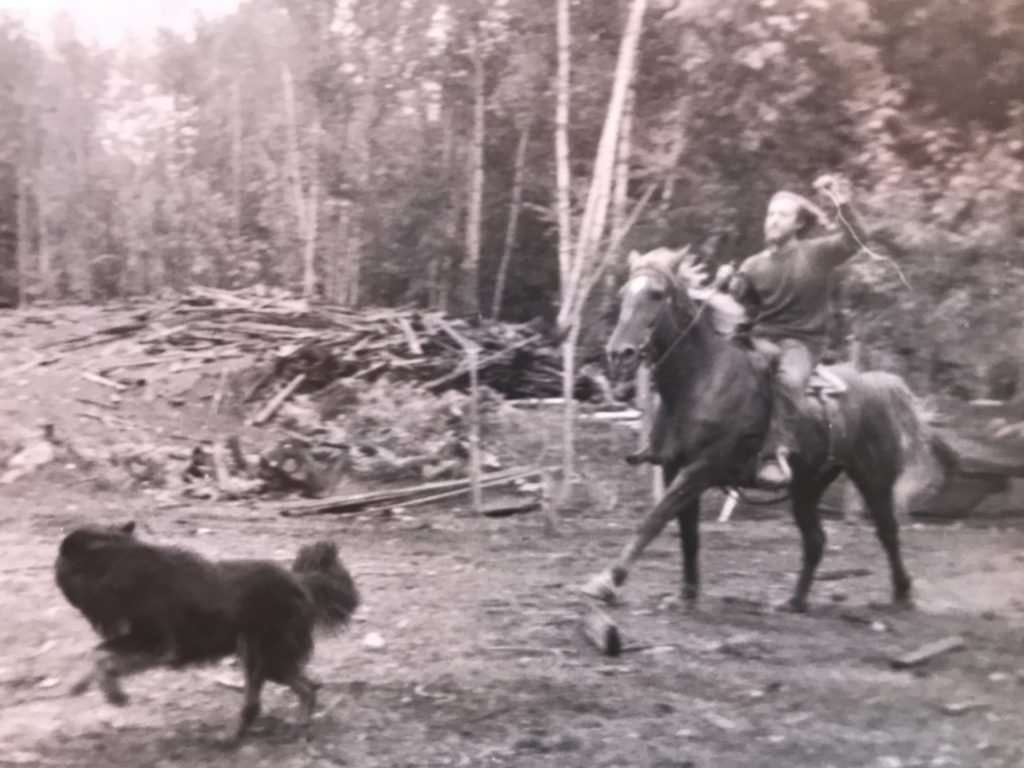 Having some fun with my horse, Whiskey. In the background, is the slab pile behind our cabin, which was left by the previous owners who had a small sawmill on the property

Initially, I had some other names for our property. At first I called it “God”s Eye” after the spiritual objects we made in Berkeley from sticks and yarn, like the one attached to the antenna of the truck we drove to Canada. This name was part of the spiritualism we felt living in the natural world, as opposed to the urban jungle we left. I later came up with a more humourous name for the property, the “Happy, Hippie Hobby, Hobbit Farm,” as the Hobbit trilogy was one of the key books we all read then. I also named the seasonal creek that flowed down from the hills through our property, Hobbit Creek and the bluff above our properties, Hobbit Hill. 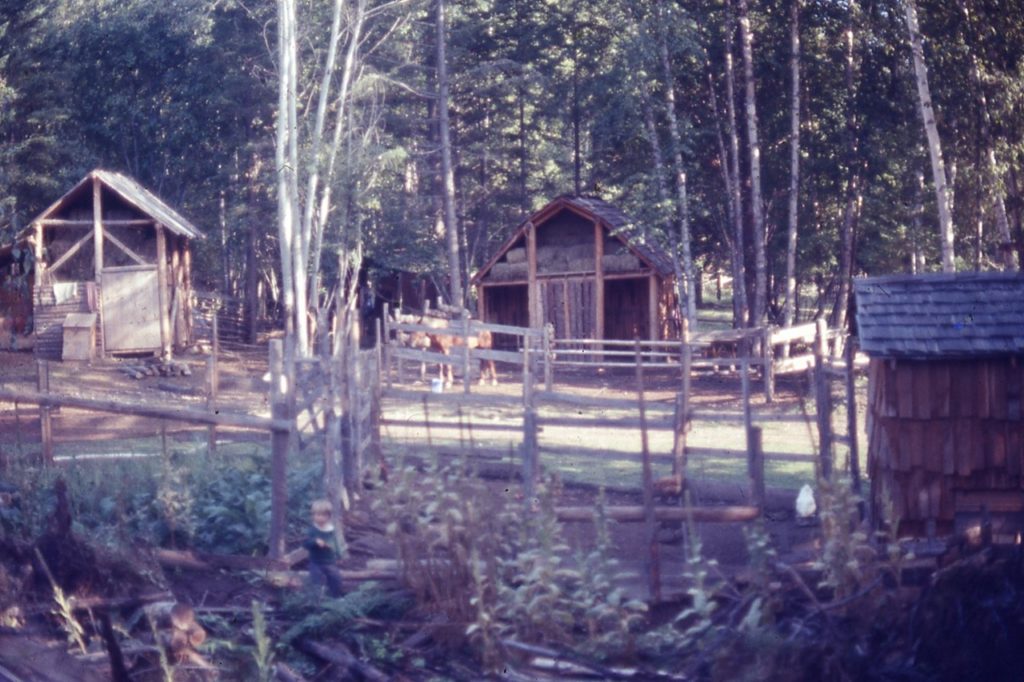 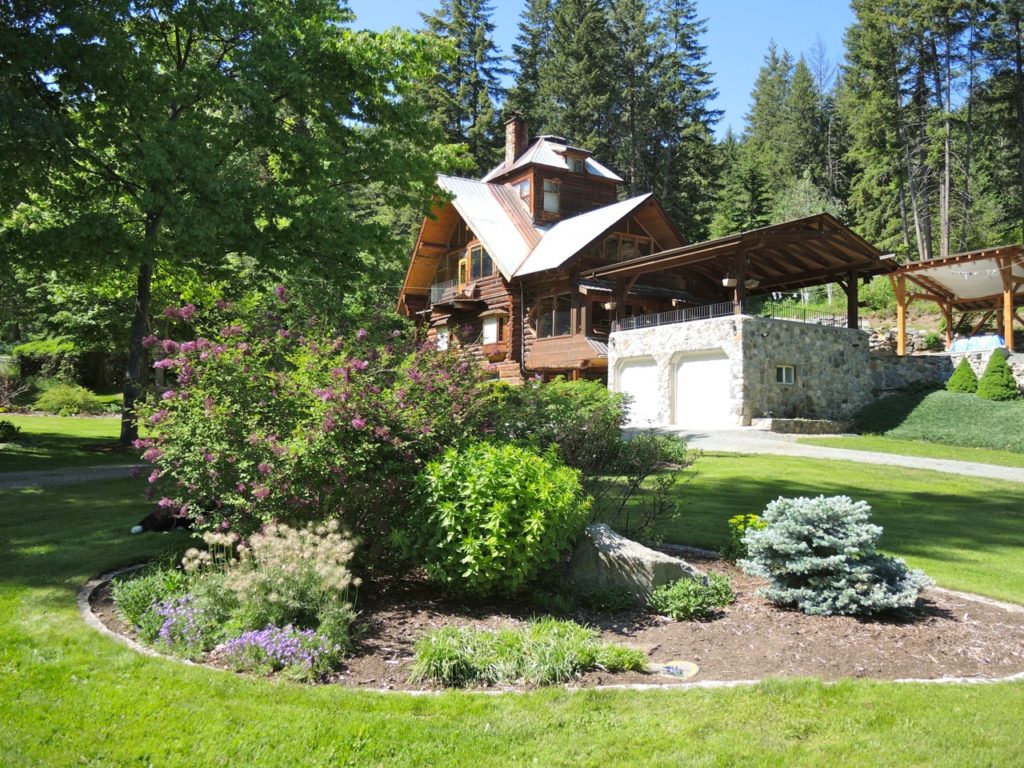 Perhaps one of the main reasons for sticking with it all these years was the vision I initially had, remained and guided me all these years. Here are some words I wrote on a scrap of paper years ago either just before we left the U.S. or shortly after we arrived:

We wish to make our own lives

We wish to align our bodies & minds

To nature, rhythms, cycles, changes of the witches’ season spirit

We can no longer relate to the

You stick to coffee & tobacco

You die of cancer & heart disease

From your pack-a-day habit

Your one drink a night

Your filet mignons & your chocolate éclairs

Richness in life is what we seek

Our image is health, beauty, and happiness

We want to produce & design

All our necessities – our clothes, houses, and food

Typed on another scrap of paper in my files is the list of items we brought into Canada on April 17, 1969 and the list of items that followed. A copy of this was given to the border guards, which was one of the requirements for entering the country as a landed immigrant. 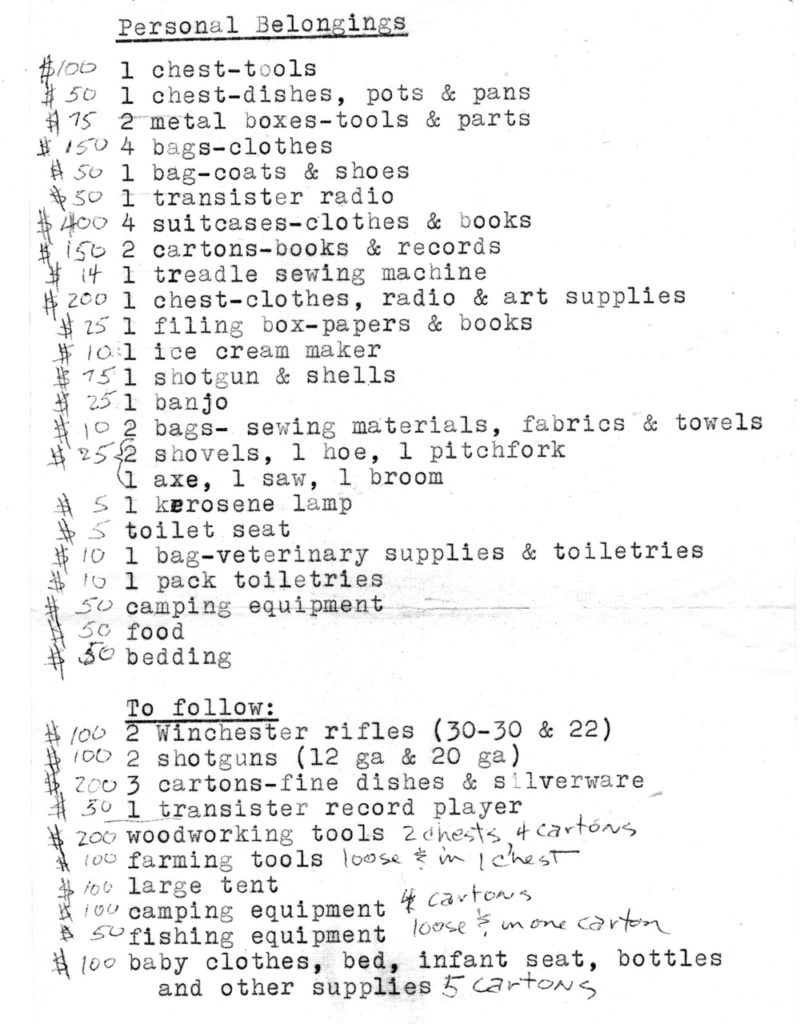