The joy of cross-country skiing at Skmana

Home » The joy of cross-country skiing at Skmana 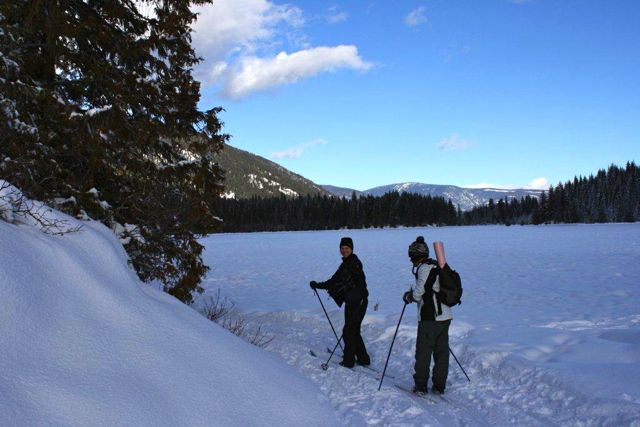 With just 18 km of groomed and track-set trails, the Skmana cross-country ski area is small in size, but there is a huge amount of local volunteer support that has made this true gem of a winter playground a major success. Just a few years ago, the Skmana Cross-Country ski club had dwindled down to just 25 people, and its Bombardier trail groomer was becoming old and unreliable.  Under the leadership of the then president, Brian David, the group began an ambitious fund raising project in 2011 to raise $25,000 to purchase a new grooming machine.

Success was achieved in less than a year and the membership numbers grew once again. Local government grants from two regional districts and the town of Chase provided over half the amount needed and the rest was earned through silent auctions, ski-athons, private donations and other fund raising projects. The new equipment includes a new snowmobile and a Ginzu groomer, which is what the Larch Hills uses for their side trails.

We have been skiing at Skmana for years, although only a few times each winter. Our favourite aspect of the ski area is the lake itself, as we often ski around it a few times as we enjoy the big sky, the views of the surrounding hills and watching the ice fishers dangling their lines. The trails in the hills are also great fun, especially the dips and the curves. Local skiers appreciate Skmana’s casual atmosphere, its close proximity to the West and North Shuswap, and its diversity of terrain.

The Skmana Club is very active, with many social functions throughout the season, including moonlight skis, potlucks, skill development sessions, and fund raising activities. In 2012, the Shuswap Trail Alliance helped the club design and build snowshoe trails and this winter snowshoeing has become a popular activity around the lake.

A few years ago, the club built a new warming hut closer to the lake after the older one was vandalized and burned. Skmana Lake is also a popular campground, especially for fishers. However, when the lake was treated to kill the invasive perch, the fishermen stopped going there and the campground became a party destination that resulted in shameful vandalism. Now that the lake has been restocked, the fishers have returned and there is hope that the party crowd will go elsewhere.

The Skmana area has an intriguing past. In 1911, the Adams River logging company built the massive, timber framed 11km long Bear Creek flume that moved the logs from the hills to the river, where they were eventually transported in booms to the mill in Chase. Skmana Lake served then as a holding pond for the adjacent timber prior to it being sent down the giant, 5-foot wide water slide to the river. During World War II, there was a Japanese internment camp near the lake, and only recently were the buildings demolished. And in the 1970s, a biathlon training centre was built at Skmana, but was never used.

The idea for a Chase area ski club first began to get going in the mid-1980s when a group of committed Nordic skiers from Chase began to look for an area to ski in and chose Niskonlith Lake. They made their own trails in those early days and a Jack Rabbit program was launched to teach children from the community how to ski. After a few years they realized that the ski conditions were unreliable at Niskonlith Lake and they began to search for a better area.

A forester in the group who worked for Adams Lake Lumber helped them pick the Skmana Lake area, as above the lake was an old network of logging roads and skid trails. And the forestry company then assisted the group by clearing off the brush off the trails and rounding the curves with a bulldozer. 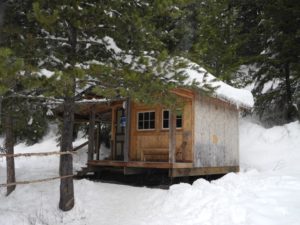 In 1990, the group formed a society and purchased a used Bombardier groomer. Key to the club’s early success was the support in Chase from Brian and Trish David’s sport store, The Starting Line that sold and rented skis and served as a centre for the club. By the mid-nineties, there were upwards of 30 children in the weekend Jack Rabbit program with four instructors.

Now the G-Force store in Chase assists the club by providing memberships and complimentary skis for locals who want to try out the sport.  There is also a ladies ski program every Friday morning. The Shuswap is enjoying one of the best ski seasons in many years, and enthusiasts should consider trying out the Skmana trails, especially if they have never been there before.

We are so fortunate in the Shuswap to have such wonderful places to recreate. Remember, that both Larch Hills and Skmana are successful because of the efforts of a large group of volunteers. Maintenance of these trails is done by committed volunteers, but there are high costs to run the equipment and maintain the infrastructure. One way you can help cover these costs is to become a member of the club. Otherwise, please remember to make a donation at the entrance to the trails ($5 at  Skmana and $10 at Larch Hills). This is inexpensive compared to the regulated cost of skiing at Stake Lake above Kamloops or at Sovereign Lake near Silver Star.