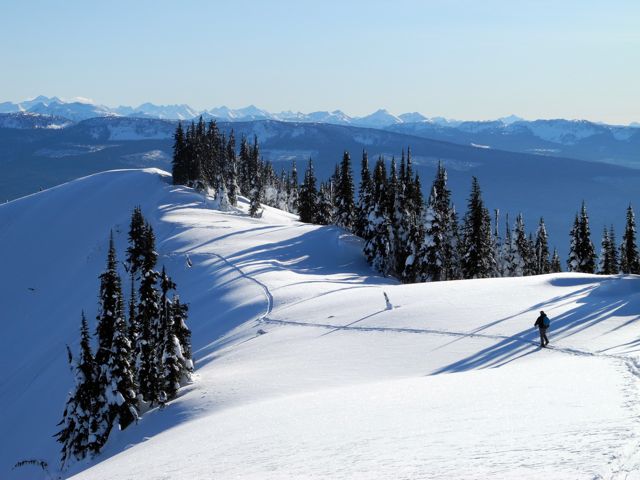 By the number of vehicles in the parking area, it was clear that the word is out about the advantages of ski-touring in the Queest Mountain area. A friend and I arrived at about 9am with two snowmobiles on a trailer that were not needed because the road had been plowed by Louisiana-Pacific, the forestry company that logs in the Gorge Creek area. The day after Boxing Day is one of the most popular days at ski resorts, and so too was it here as there were approximately two dozen skiers and snow boarders ready to enjoy the deep powder on the steep runs without any need to buy a lift ticket.

After gearing up and putting skins on our skis we used the up-track laid by the skiers ahead of us. Winding our way through the mature thick spruce and balsam forest, we gained altitude quickly. It took us about an hour to reach the base of the mountain where we could view the various options for our return run. Although we were now in an avalanche zone, we felt safe, as we had checked the online avalanche conditions that morning, which showed that the conditions were relatively stable in the North Columbia Mountains and throughout the province (the Canadian Avalanche Centre bulletin showed low risk at treeline and moderate risk in the alpine). 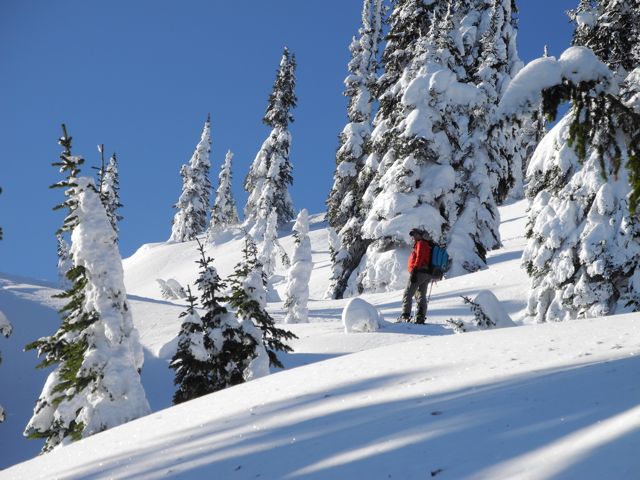 After another hour of climbing up the steep mountainside on a trail with countless switchback turns, which requires a technique of lifting and turning your skis that takes some time to master, we arrived at the top ready to hit the powder. Even though we were following the group in front of us, there was plenty of open terrain for some wicked steep turns that produced multiple face shots of powder snow spraying over us. 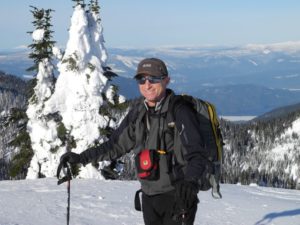 On the top, with Shuswap Lake in the background

We enjoyed our lunch in the nearly 280 cm of deep snow, at the bottom of the run sitting on the back of our packs that rested on our skis. The group ahead of us arrived and two of them were friends that have been skiing here for years. We followed them back up the mountain for a second run, again in fresh powder. Although I have skied here a number of times, I am still not confident about finding my way around, but my partner had a GPS that helped us navigate through the off and on foggy conditions. And it was also helpful to follow tracks set by my friends who know the mountain well. 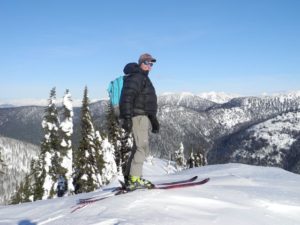 When we reached the top of the hill again at about 3pm the fog cleared off and we could see the two Queest peaks, the creek valley, the surrounding forests and cutblocks and the runs below that led back to the parking area alongside the road. Even though the skiers ahead of us had already tracked up our last run, there was plenty of powder left to enjoy our final turns on the steep slope. There were still three vehicles in the parking area when we drove away, and we guessed that these skiers had decided on one more run despite the possibility of having to ski back using headlamps.

The popularity of the Gorge Creek area continues to grow every year, as this is the best place to ski tour in the Shuswap, and it attracts skiers from as far away as Kamloops, Kelowna, Revelstoke and Vernon. Backcountry skiing also continues to grow in popularity, as it combines the best elements of cross-country and downhill skiing. While it is rare to experience deep powder at a ski-resort, because it doesn’t take long for the runs to be tracked up, a backcountry skier has fresh powder filled slopes to ski on regularly. 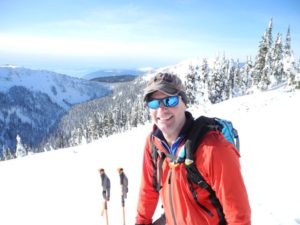 The Queest Mountains have become the Shuswap’s best-known, free snow playground, with sledders to the northwest and skiers and boarders to the southeast.  It was George Mercer Dawson who named these mountains and the creek, deriving the word Queest from the word, Kwieshp that was used in his 1877 Canadian Geological survey. An early translation of the word was ‘buffalo,’ but this translation was later deemed incorrect, and the original derivation of the name remains a mystery. 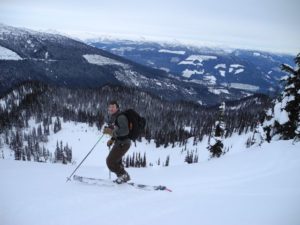 Upper Gorge Creek is included in the 2007 Columbia-Shuswap Regional District Area D parks plan final report as a community recreation park. It would certainly be beneficial if the CSRD could plow the road when logging is not happening, provide maps and signage, and develop summer hiking trails. To get an idea of what it is like to ski Queest Mountain, view my YouTube video using this link.

The latest word is that the Gorge Road will no longer be plowed this winter, so skiers will need to use a snowmobile to access the mountain. It is a good idea to take a avalanche safety training course if you plan to spend much time in the backcountry on skis or a split-board. Check online to find out where AST courses are available. I think that ski-touring is one of the best winter sports there is, because it combines alpine touring with steep, downhill skiing in deep powder snow. The best way to begin this sport would be to rent equipment and spend 4-7 days at a backcountry ski lodge in a guided group.

There is much more to the issue of First Nation place names and specifically the name Queest. Early geological surveyors like George Mercer Dawson relied on First Nation guides when they first explored this country. Often these guides were from a nation that spoke a different language than the nation whose land was being explored.

In the case of the word Queest, it is possible that Dawson’s guide came from the Okanagan. The word Kwieshp is not part of the Shuswap (Secwepemc) language, but it sounds like an Okanagan word for ‘name.’ So if Dawson asked what is the name for this creek, he might have heard this word and used it. A similar situation occurred somewhere near Hope, where the Indian guide was asked for the name of a creek and he replied with his First Nation word for water, which then became the name of the creek.