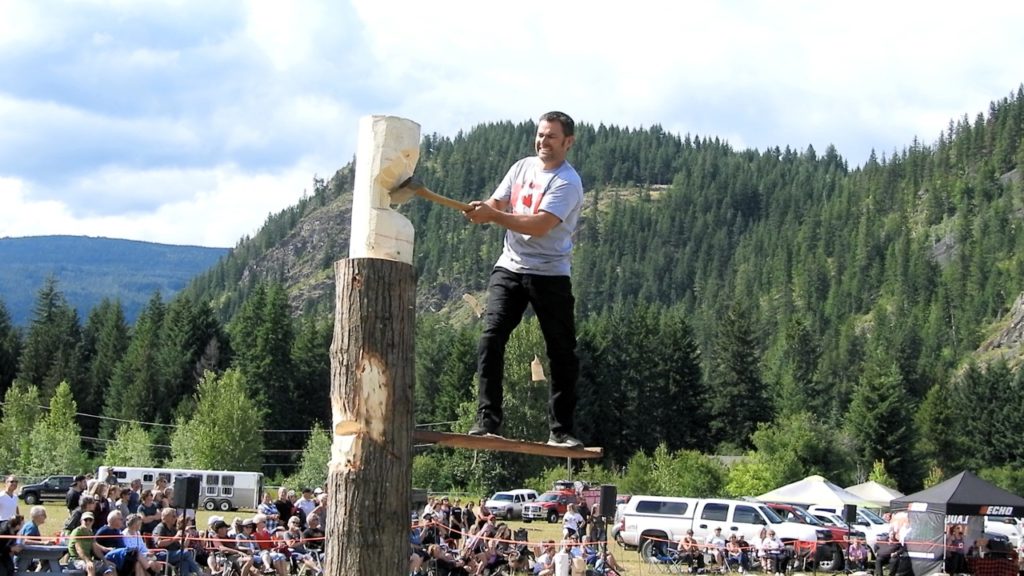 Carson Bischoff dong the final chopping in the Springboard competition

The large crowd gathered in Scotch Creek behind The Hub on the Canada Day weekend to watch this year’s Timber Day’s events were treated to two extraordinary opening acts. Jody Evans, who also produces the very successful logger’s show at Grouse Mtn. held every day of the week, performed his stunt high up on a “spar tree,” from which he “fell” while connected to a zip line and lumberjack extraordinaire, Carson Bischoff, “survived” when the outhouse “blew up!” The crowd loved the opening show and they were entranced for all the competition events that followed. 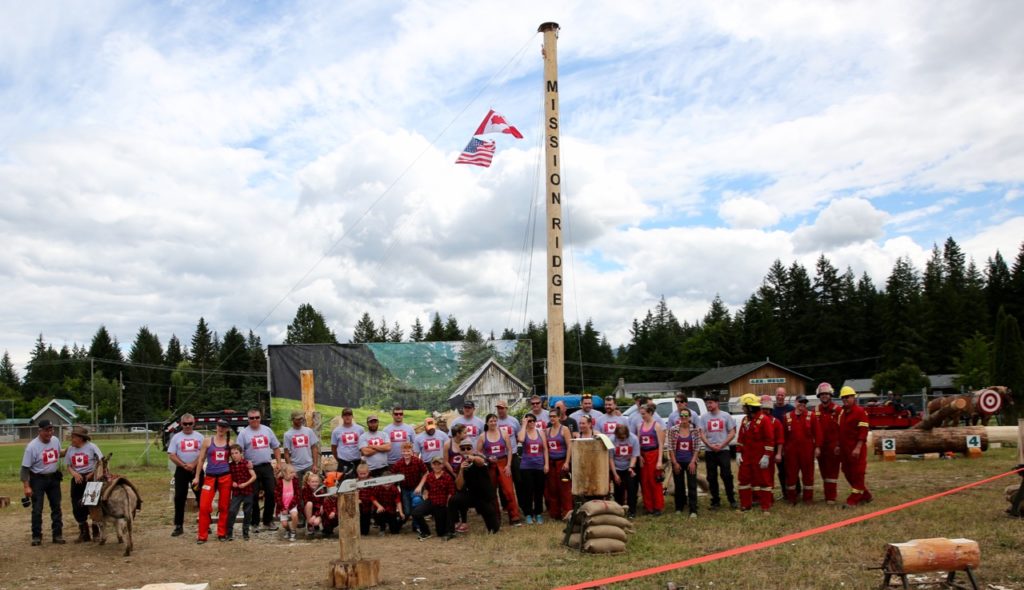 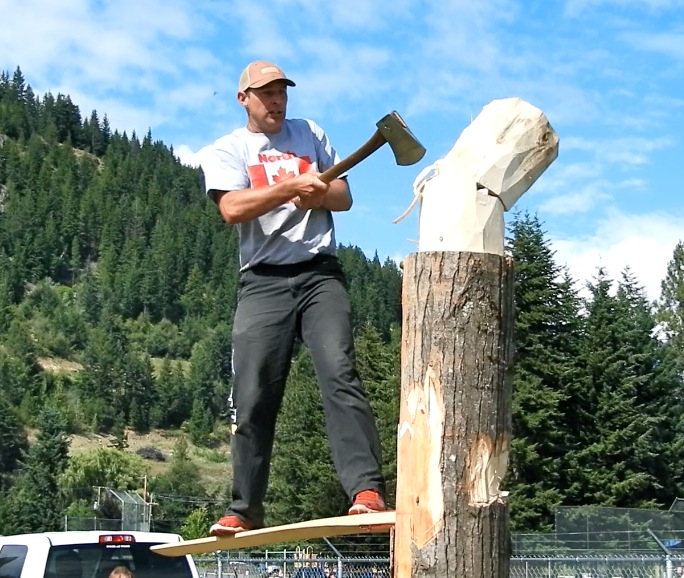 One of the most exciting events is the springboard, where the contestant has to chop a notch in a pole, insert a springboard that he climbs up to chop another notch until he gets to the top where he has to chop through the attached pole. You can still find old cedar stumps in Seymour Arm and elsewhere that have slots from the springboards used in the old days to fell trees in order to avoid the massive flared butts. 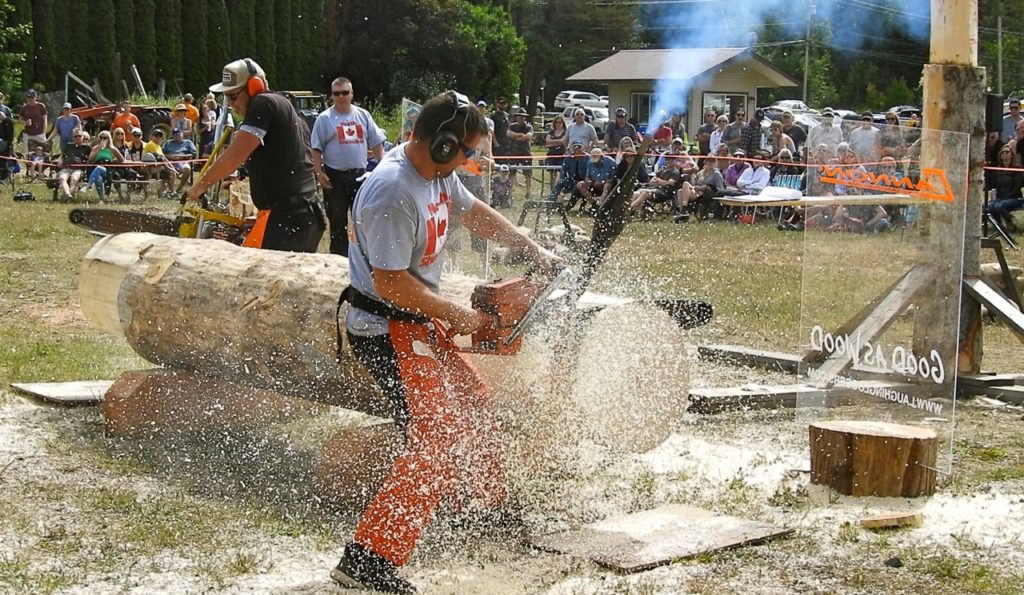 The world champion for the springboard event, Mitch Hewitt, who lives in Scotch Creek, had a lengthy handicap before he could begin and yet he still won the contest. Mitch travels to Sidney, Australia for the world competition. He married into the North Shuswap legendary pioneer family, the Bischoffs, who are the founders and the mainstays of the Timber Days Society, which hosts the event every two years. Local businesses sponsor the show by providing cash prizes for the winners and North Shuswap volunteer fireman provide much appreciate assistance. 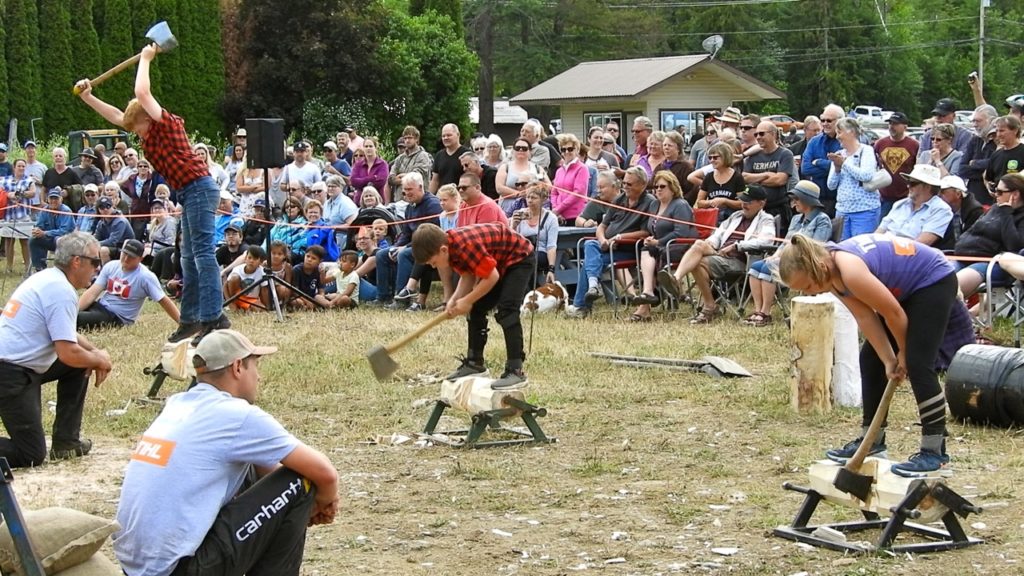 It takes brute strength and raw talent to perform well at logger’s sports according to Karl Bischoff, who began his career in 1977 at a competition in Salmon Arm. His favourite events include the wood chop, where the timberjack stands on the log secured in a steel holder while he chops through it; the cross-cut (or “misery whip” as the old-timers called it) where the sawyer is timed as they cut off a slice; and noisy “hot saw” where competitors use souped-up power saws to cut off two slices, down and up. 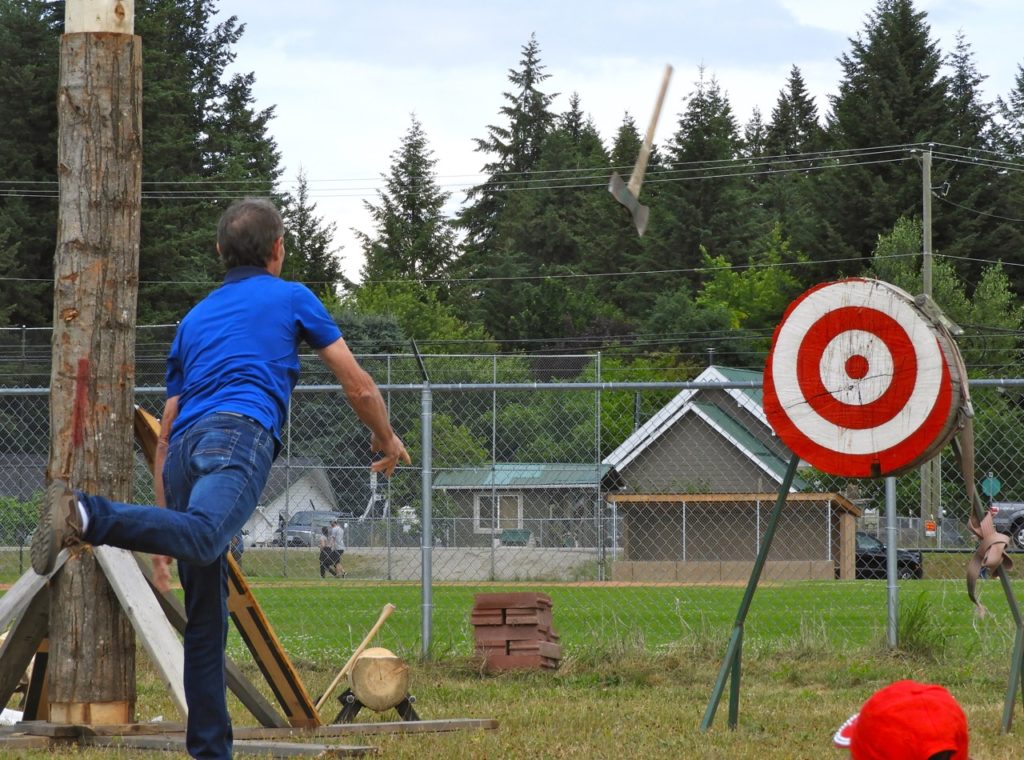 Other events include various power saw competitions, pole climbs, and the axe throws. Over the years, the Timber Days Society has acquired much of the gear used for the sport such as the steel holders for the wood chop and the axes and saws. Large poplar trees are felled and prepared for the chopping and sawing competitions. 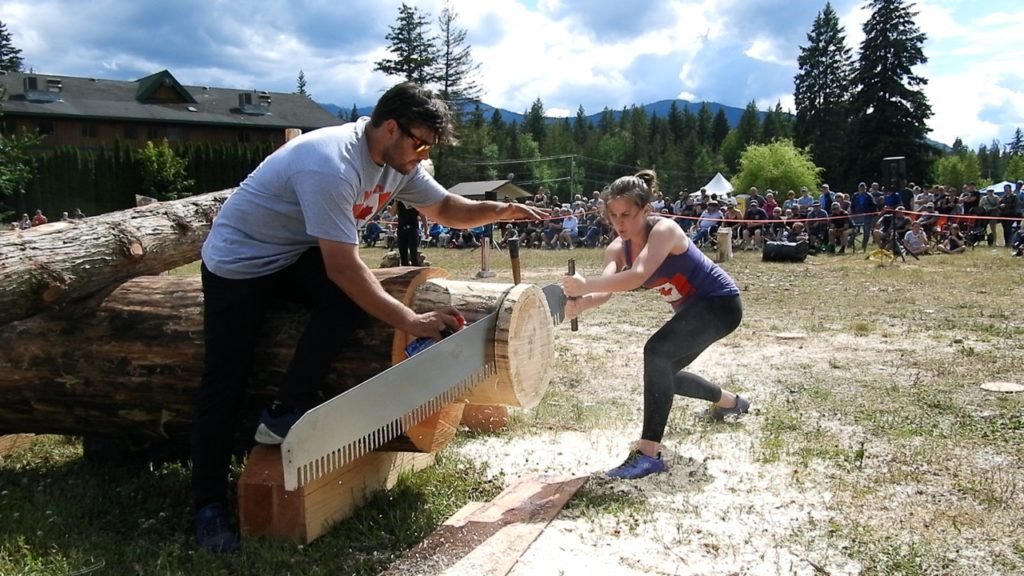 Just as there are fewer loggers now in the woods, given the advances in high-tech logging equipment, there are fewer people involved in logger’s sports. However, more women are taking up the sport and it was cool to see the gals sweating it up with the crosscut saws at Timber Days. Also, they had to change the name of the boy’s chop, as there was one very energetic girl swinging the axe. No doubt, the North Shuswap Timber Days will go on thrilling audience for many years to come.

Watch my video published by the Observer: Logger’s Sports 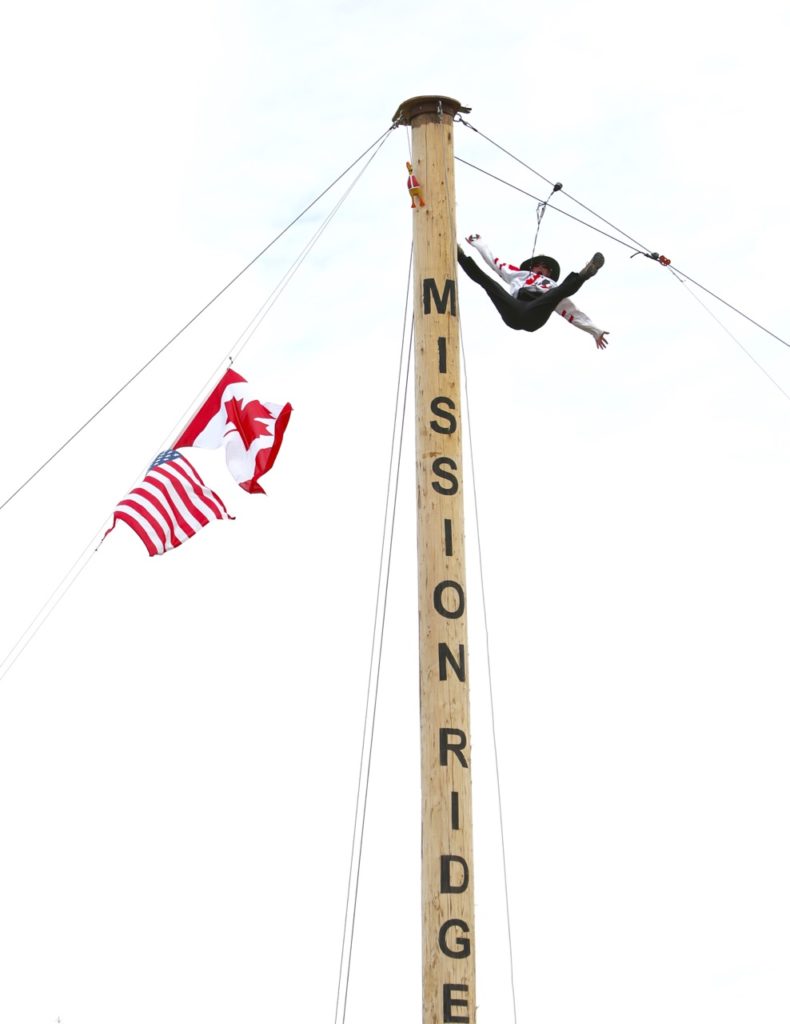 Jody Evans “falling off” the spar tree as the drunken tourist, photo by Janis Smith 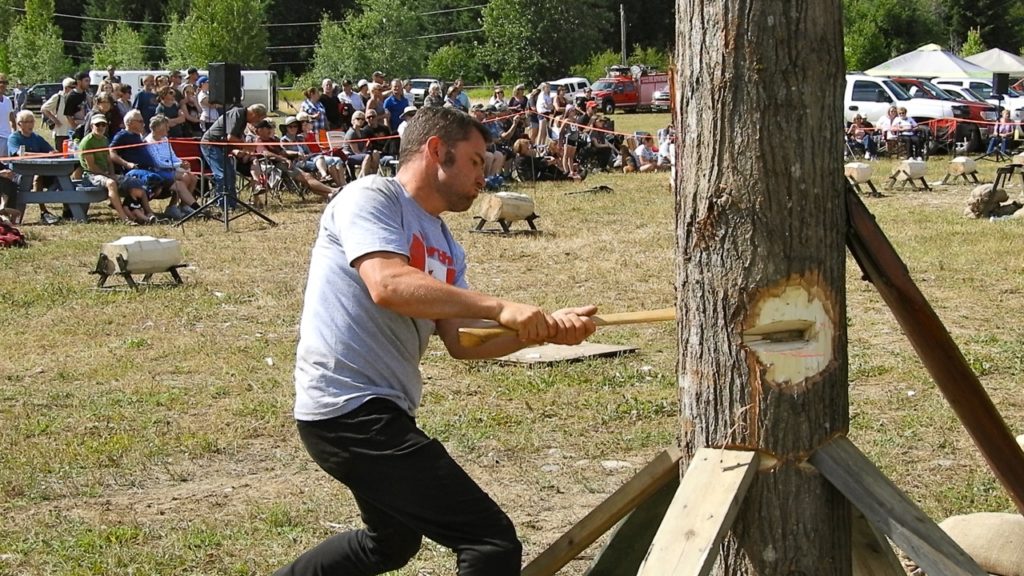 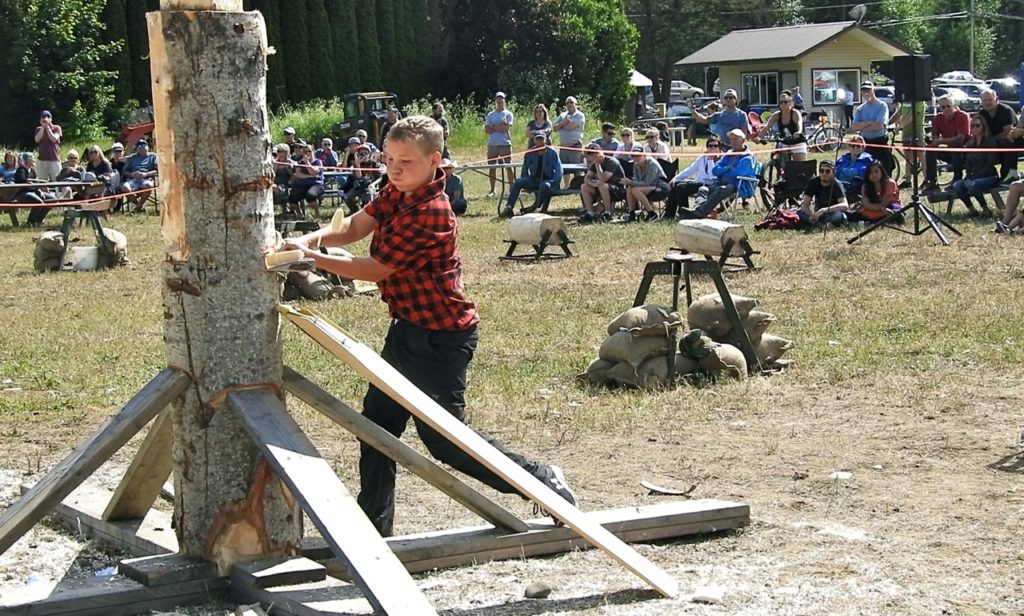 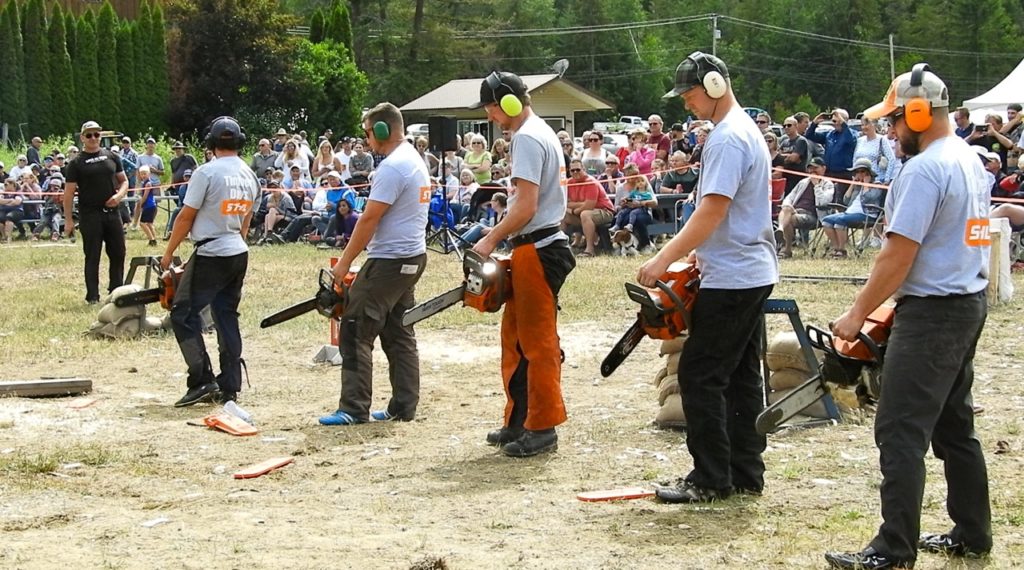 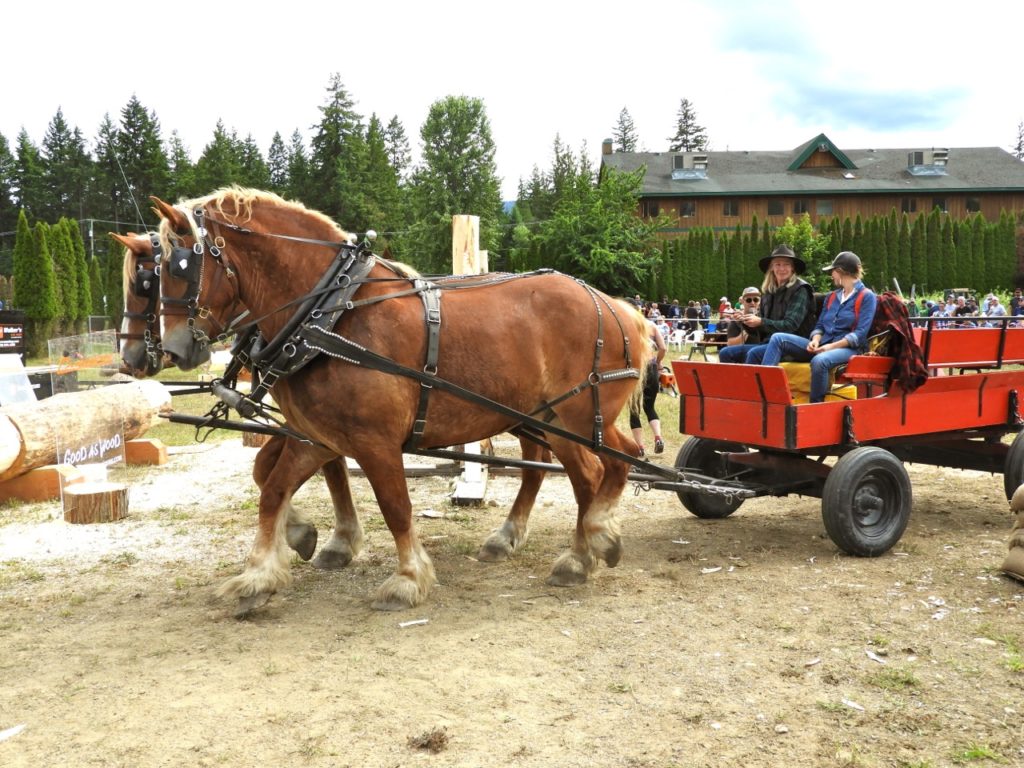 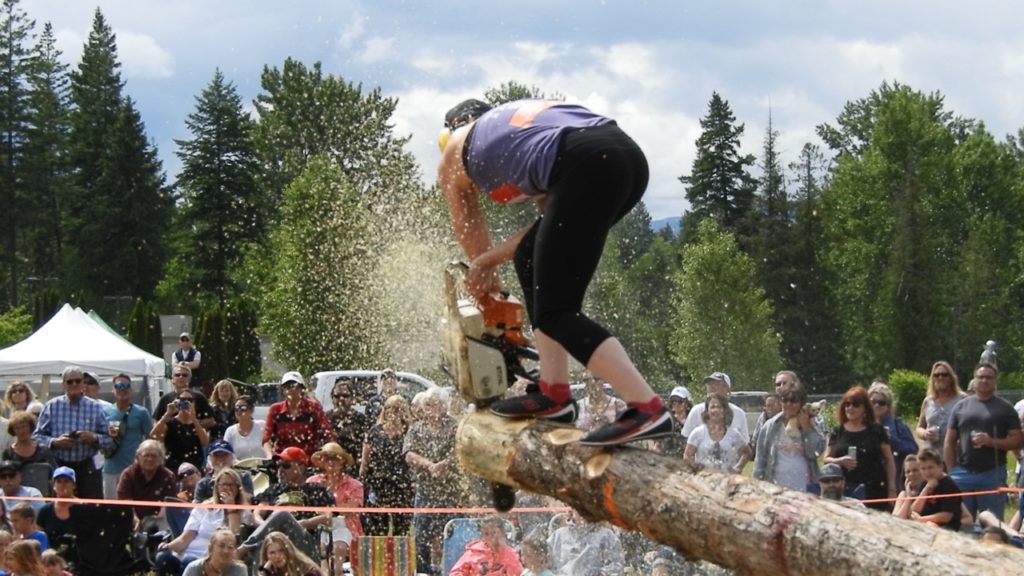 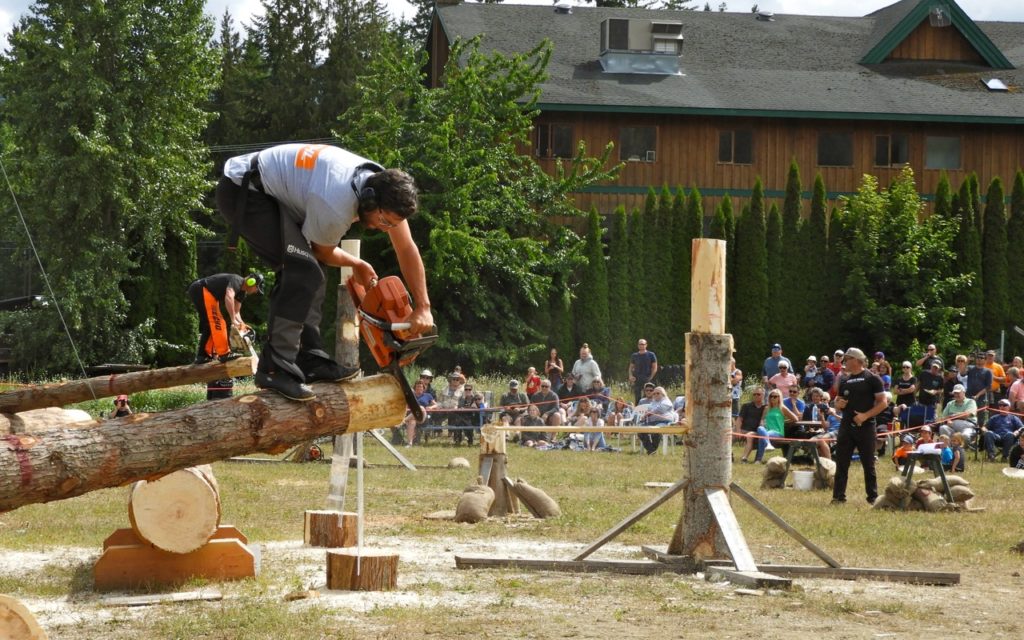