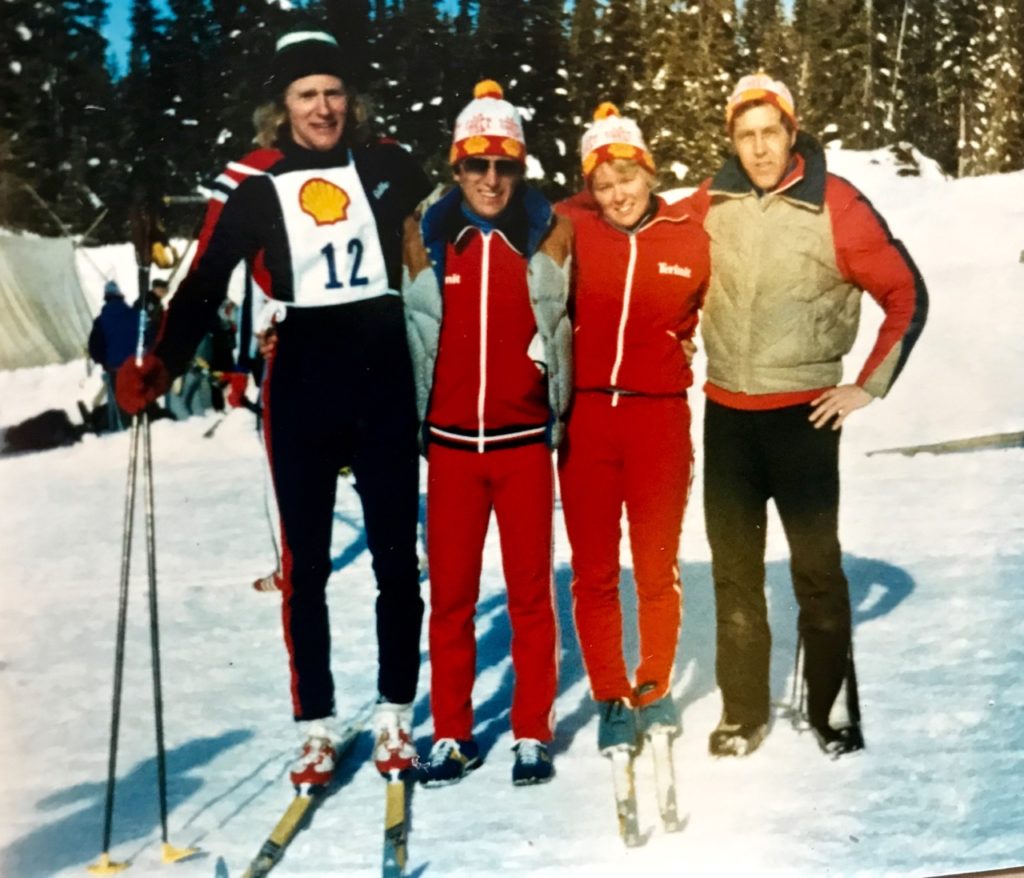 While Nordic skiing was a popular winter sport in the Shuswap, especially for Scandinavian immigrants during the settlement era, its popularity declined after WWII. Thanks to college instructors Tom Crowley and Connie Crowley, interest in the sport began to grow again in the early 1970s when they offered lessons to adults at local schools. In 1973, they joined with a group of avid cross-country skiers to form Shuswap Outdoors!, a club that continues to engage in year-round outdoor recreational activities. 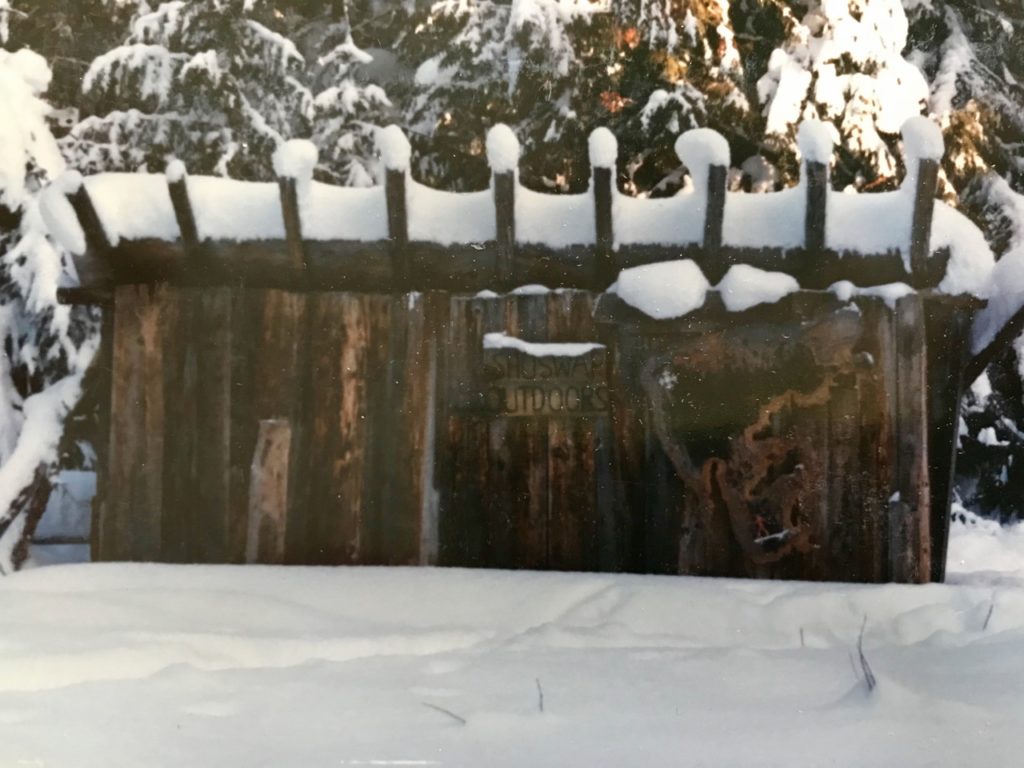 One of the original shelters built by Shuswap Outdoors!

Club members first skied at Mara Meadows where they discovered the many old logging roads and trails throughout the Larch Hills and realized that these hills were ideal for an organized trail network. After a few years of clearing the trails by hand, they formed a registered society in 1978, obtained a permit from the forest service office and received two Canada Works grants, which helped them design, clear and make the signs for 136-kilometres of trails. Two lean-to shelters were built out of logs and more trails were added in succeeding years. 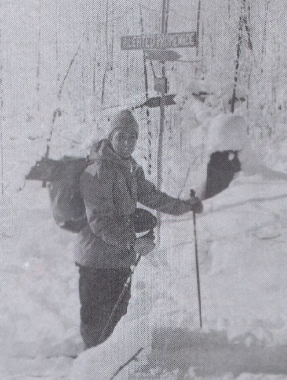 Shuswap Outdoors! members, Stig and Ruth Keskinen were keen skiers, a sport that Stig had excelled in as a youngster growing up in Finland. One day Stig was asked to teach Erkki and Aira Keski-Salmi’s son Reino how to ski. Reino, who along with his parents were also Finnish immigrants, was ready to race within a year and they entered the Lake Louise Loppet. A licence was needed to participate, which Reino acquired by joining the Revelstoke ski club.

As he did not want to keep racing as a Revelstoke skier, Reino suggested to Stig that they form a Salmon Arm club. While Ruth and Bev Walker took on the task of doing all the paperwork, Stig became the first president and in 1980 the club was incorporated with just four families as members. In the early days, practices and races were held on the level terrain at Dry Lake in Skimikin, which at first they tracked set using their skis. The club traveled to its first provincial race in 1979 where they did well and in 1981, they won the trophy at Burns Lake. 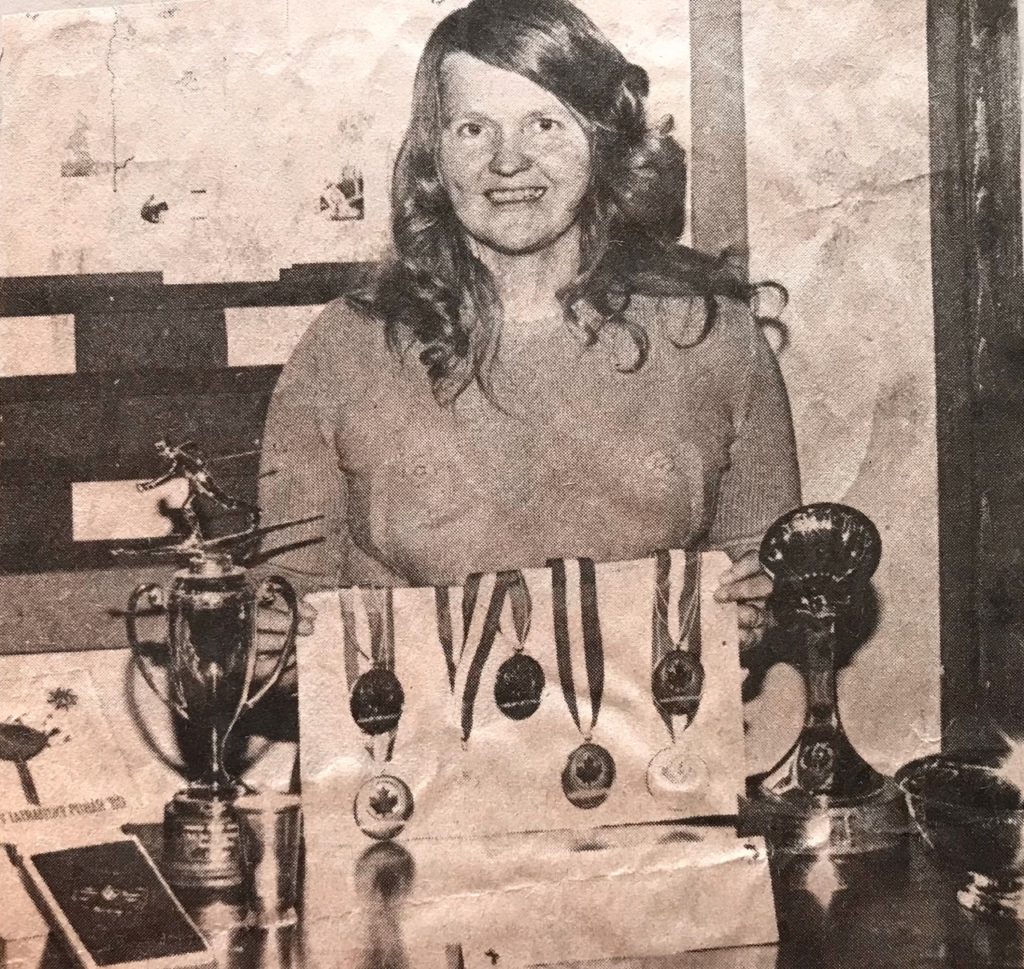 Ruth Keskinen showing off Reino’s awards in the early 1980s

The next step was to create a well-managed ski area in the Larch Hills, however they faced resistance from the local forestry office who was concerned that recreational use would restrict logging. Ruth and her team sprung into action, spending many days at a table in the mall signing up members and gathering petition signatures. As a reporter and columnist for the Shopper’s Guide, Ruth was critical of the forest service’s opposition and the news made it to sympathetic politicians and staff in Victoria. 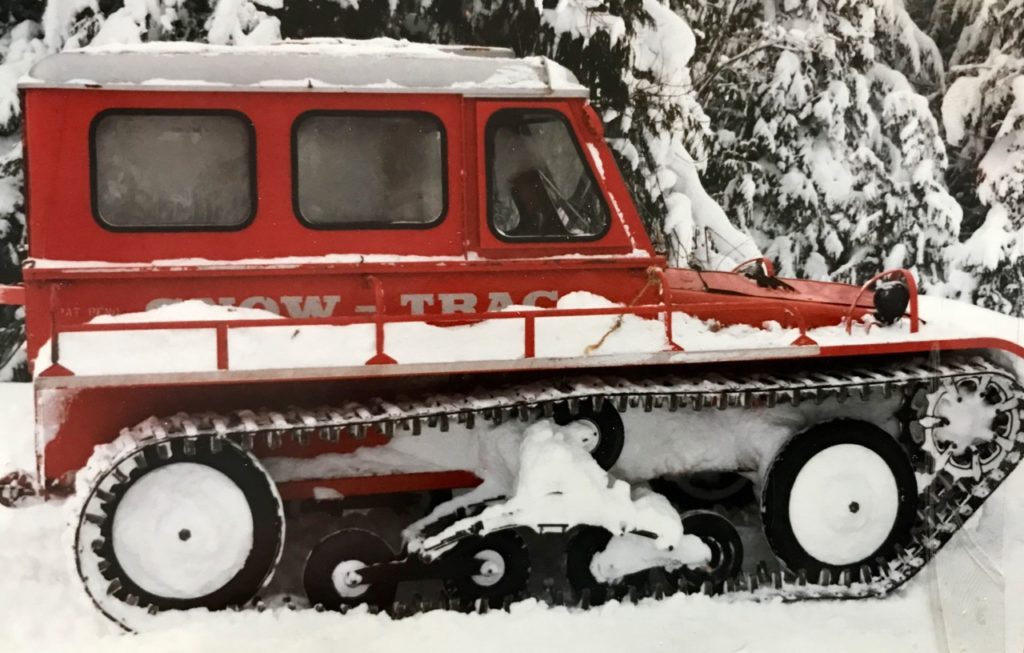 This twin-track snowmobile was the club’s first groomer, Photo courtesy of the Larch Hills Nordic Society

Once the local forest service reversed its position, progress came quickly. The first step was acquiring a groomer, and with a loan from Shuswap Outdoors! and grants, the Larch Hills Ski Club purchased a twin-track snowmobile and the forest service loaned them a tracksetter. 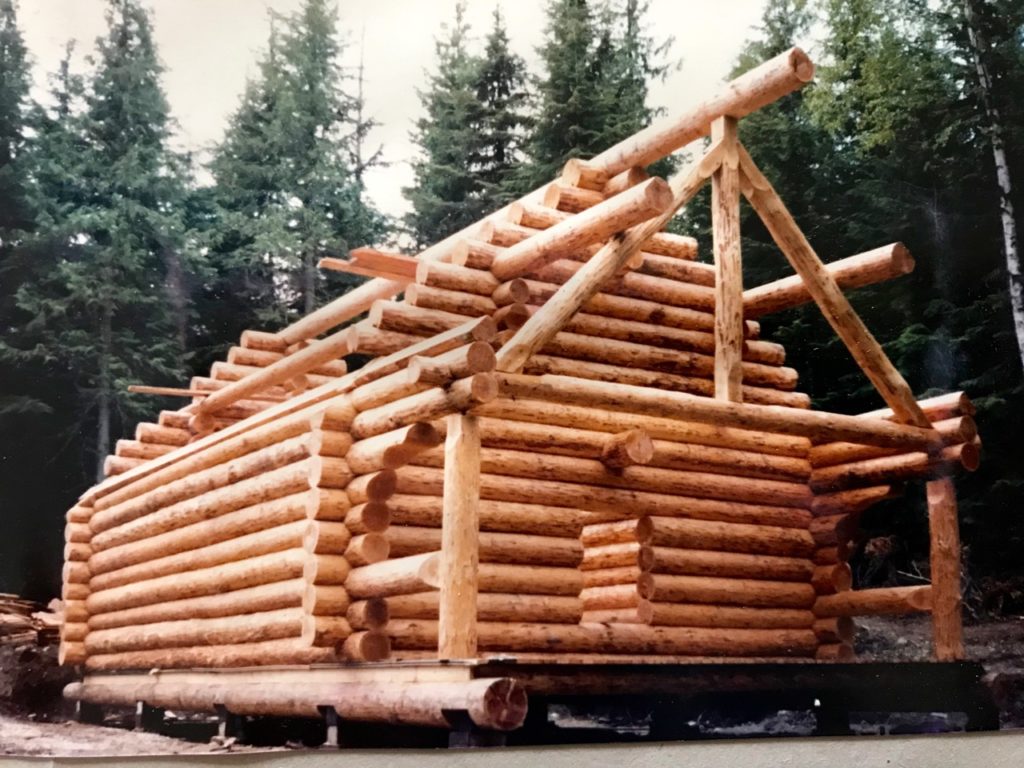 The original chalet with all the logs up, Photo courtesy of the Larch Hills Nordic Society

Trails were widened and in 1982, the forest service built a new logging road to replace the steep, muddy one now used as an outrun trail.  After many stakeholder meetings, in 1982 the Larch Hills was designated a 1,620 hectare winter recreation area. The following year, the original chalet was built by Duncan Morris, who supplied the logs, Dick Riach and other volunteers. 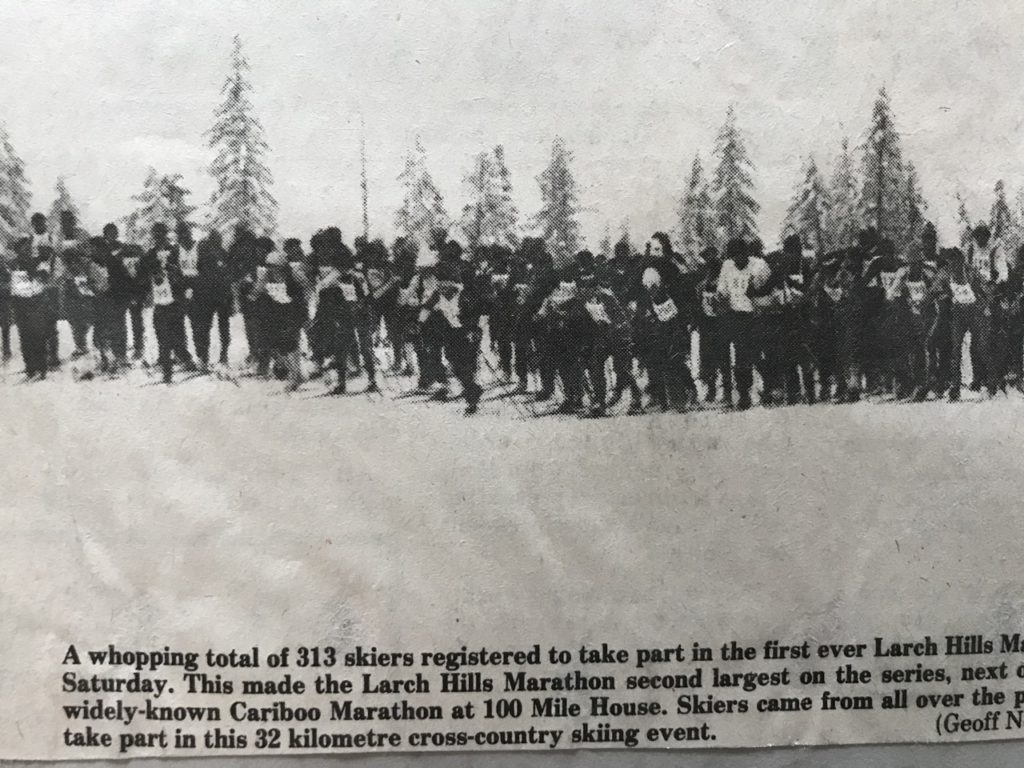 Local coverage of the first marathon held in 1985

Today’s amazing success of the Larch Hills year-round recreational area is a result of the cooperation between self-propelled recreation enthusiasts, ski-racing devotees, and government land managers keen on sharing the resource. Reino Keski-Salmi, whose idea sparked the club’s creation and who became a North American ski champion, may have become an Olympic hero had he not tragically perished in 1985 during a fire-fighting helicopter crash. The annual Loppet marathon, named after him in 1986, is now a premier event that attracts many hundreds of skiers.

In addition to clearing the old logging roads for ski trails and installing signs, Shuswap Outdoors! also produced 3 map brochures. The first one in 1978, showed a complex web of trails, each marked with a red circle, square or diamond indicating if the trail was easy, general or advanced depending on how steep it is or if it has sharp curves. 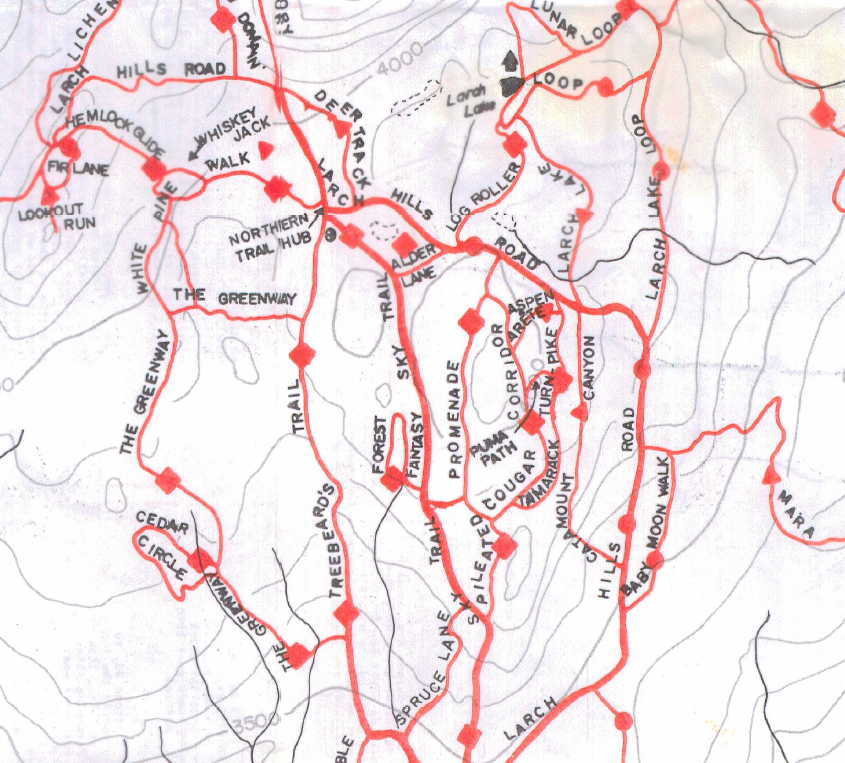 A section of the map (some of these trails are now groomed and others remain natural), from the Shuswap Outdoors! 1978 map brochure 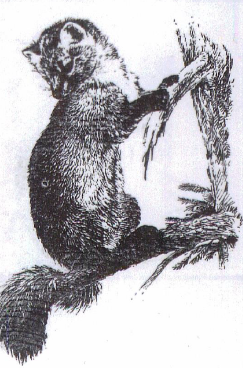 The routes are described in detail, with descriptions like “deep forest and little swamps are encountered,” “open, semi-rolling terrain,” and “three very steep sections before joining Larch Hills road.” Throughout the brochure, there is clip art of animals found in the hills. The brochures were printed on waterproof paper, so they did not fall apart in the snow. It was the hardy few that managed to ski in those days, as the road was not plowed and skiers would often need to break trail in deep snow. 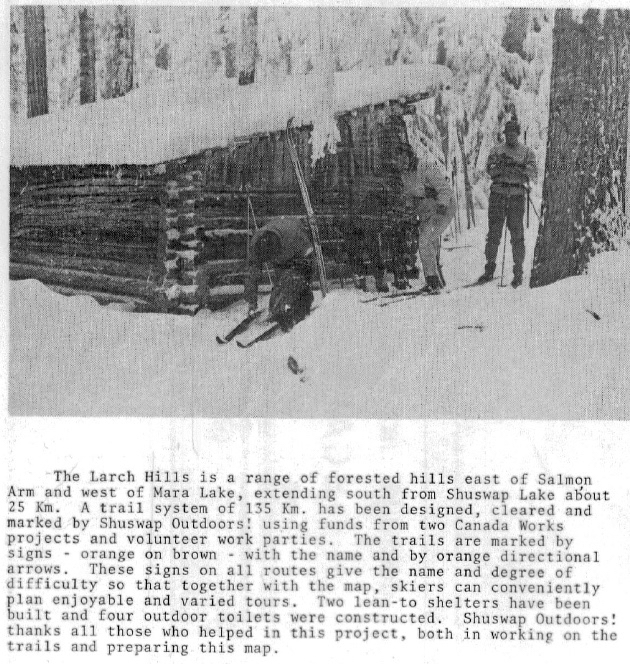 While Shuswap Outdoors! deserves the credit for establishing the Larch Hills ski area, it was the new Larch Hills Ski Club (now the Nordic Society) that organized the grooming, built the chalet, taught youngsters how to ski and helped made the area accessible for the public. There was a good deal of cooperation between the groups, however there was also a lingering dispute about grooming. Shuswap Outdoors! prefers ungroomed trails and finally, in 1990 an agreement was reached that ensures some trails, like Treebeard, remain ungroomed.

There are many others who deserve recognition from the early days of the ski club. The first four families in the club, were the Keskinens, the Keski-Salmi’s, the Walkers and the Harts.  Olie Hansen who lived beside the ski area, made sure the tracks were set and his wife, Gullan was an avid supporter and skied up until she was 80 years old (the Gullan’s Gully trail is named after her). Tom Emerson was instrumental in obtaining the grants to help cover the costs of building the chalet.

In the early days, there were practice sites in town, at the ball park, the industrial park and by the Shannon Bros. Recreation Centre in Canoe. In 1981, the club chartered a bus to take all the local skiers up to Burns Lake to compete. 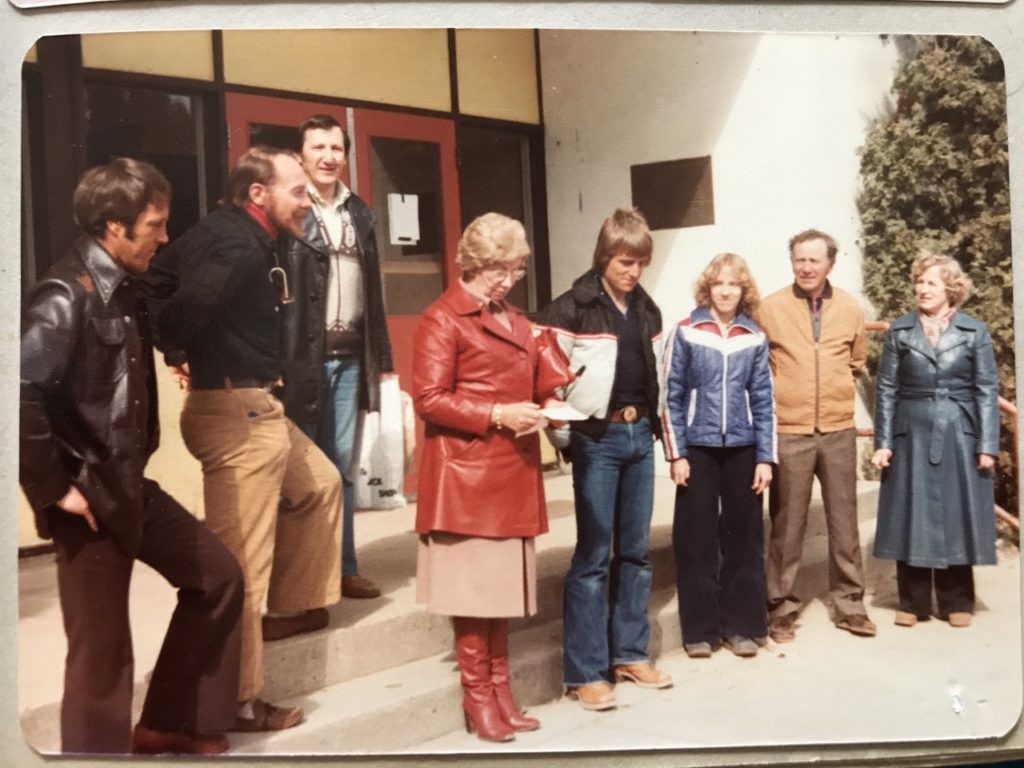 Mayor Lund presenting Reino with a plaque, behind her is Tom Crowley and Jack Alouf, Photo courtesy of the Larch Hills Nordic Society

Reino was a hero to the community and after he captured firsts in the North American Championships, he was welcomed home with a parade. At city hall, Mayor Lund bestowed him was a plaque from the District, in thanks for “putting Salmon Arm on the map.” Jack Alouf presented him with an Adidas bag on behalf of the Chamber of Commerce. 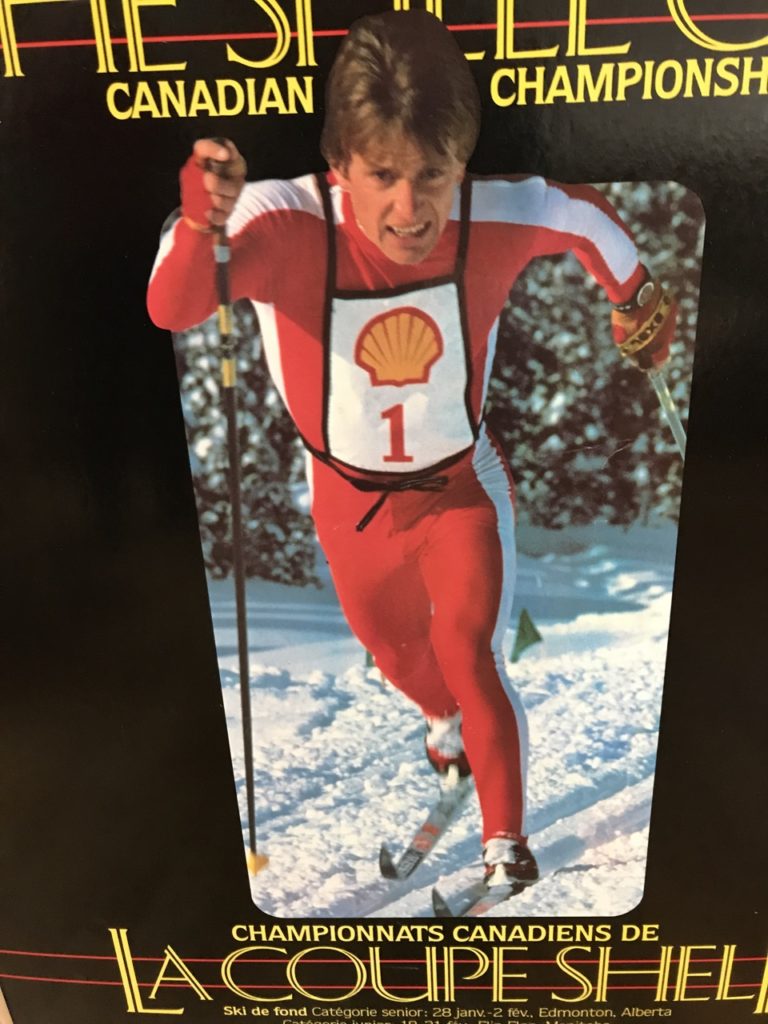 After two years of skiing, Reino was a National contender. Twice he was the overall Canadian Champion, a winner of the North American marathon championship and he had notable results on the World Cup Circuit. During one race in Edmonton in 1982, Reino was in the lead, but then collapsed from an inflammation around his heart and lungs. He had become sick after competing at a race in Quebec that had to be canceled midway, due to icy conditions. He recovered in short order and soon after tied for first in a race in Vermont and then became the first Canadian to win the Great American Ski Chase in California. 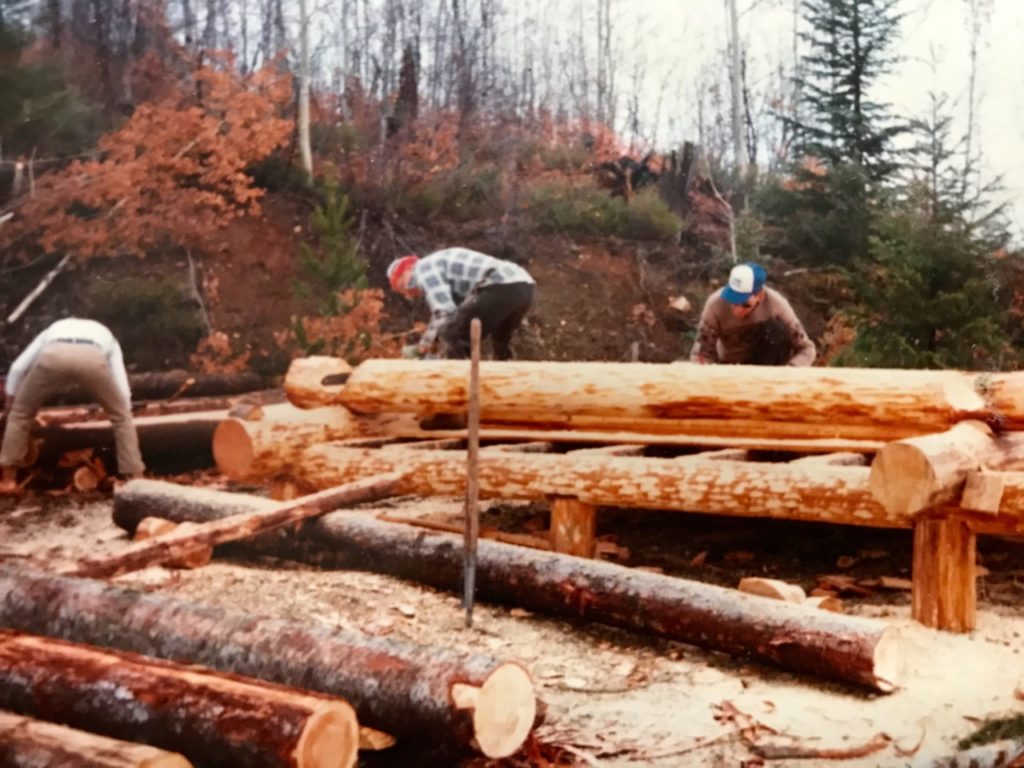 The first Jackrabbit Program to encourage youth skiing began in 1984 under the direction of Pat Hutchins, who became one of the club’s presidents. It wasn’t until 1985, that the first management agreement was signed with the Ministry of Forests. In the early days, there were conflicts with snowmobilers, which was finally resolved through management planning with the government. Cec Pulcifer began building Cec’s cabin in 1987 and finished it the following year. 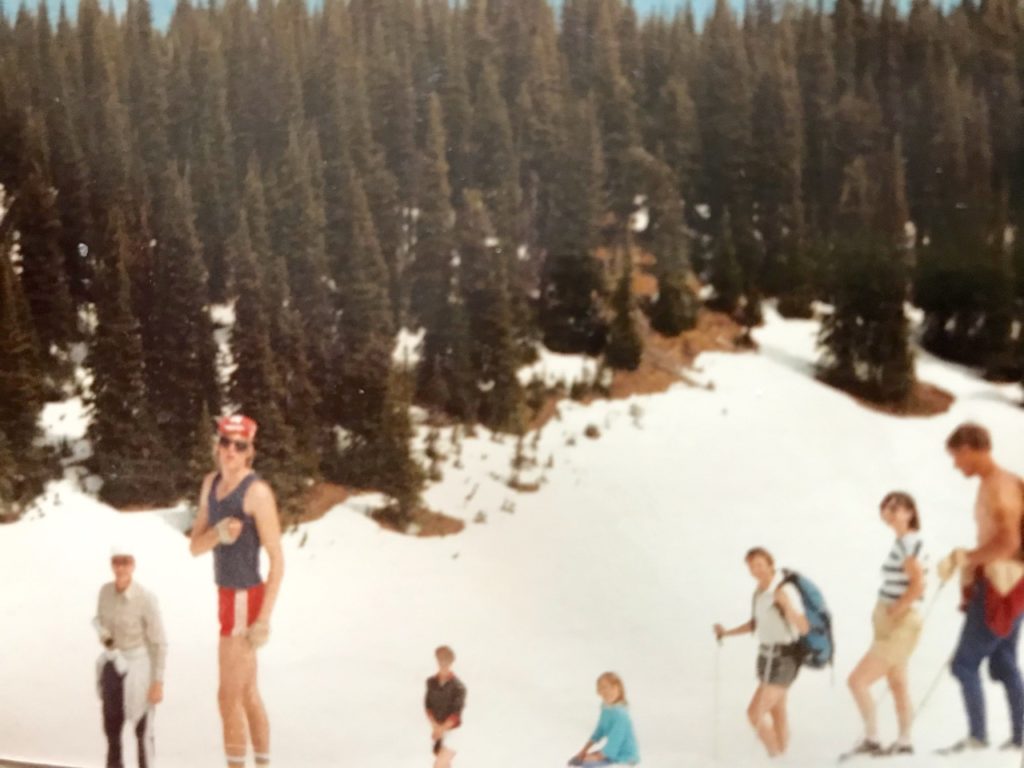 The “Slush Cup” was a popular event in the early days, Photo courtesy of the Larch Hills Nordic Society