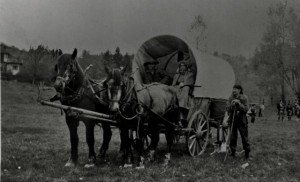 As was explained in a recent column, the city of Salmon Arm originated as the Salmon River Valley farming centre and Silver Creek was then and still is the heart of this valley. Silver Creek began as a close-knit community and it remains so now, as the locals continue to join together for events throughout the year at their community hall, that was built sometime in 1927, and at their local community park.

The creek was named by Caroline Johnston, a mother of two early settlers, after the silver diggings that were likely found some years prior to the beginning of settlement. Malcolm Graham, spent most of his childhood years in Silver Creek, where his grandfather Wilbur Ames homesteaded. He remembers stories about how the silver was dug out of the clay banks below the fork of the creek and hauled in sacks on the backs of mules to the CPR station in Salmon Arm. He also hiked up the trail when he was young and found some traces of silver that looked like wire.

I recently had the opportunity to interview a few Silver Creek community stalwarts, including two granddaughters of one of the original pioneers, Alexander MacLean. Verna Bell, who was born in 1936, grew up on the MacLean family homestead before moving to the Cariboo. Back home now and living on the remaining few acres of the original 160 acres, Verna remembers well how the focus then was their Seventh Day Adventist church and school and the social life surrounding this religious community.

Her grandparents travelled north from Montana in 1901 in search of land to farm after reading an ad in the local paper about B.C. homesteading opportunities. Joining them was the Haines family, who also settled in Silver Creek. Verna remembers how neighbours often helped each other then, whether by lending horses for plowing, assisting with building projects or bringing a buzz saw over to cut the winter’s firewood.

The first task that faced the early pioneers was to clear their homesteads, as the valley was originally heavily forested. When sawmills were set up, the river was used to transport the logs in the spring, which scoured the spawning beds and damaged the young fry. As a result of this damage and the slide at Hell’s Gate, the salmon disappeared from the river named after them and the settlers were no longer able to use the masses of dead fish to fertilize their fields.

Both Graham and Verna remember how the Salmon River was much larger and wider in the early days, due in part to higher snowpacks and far less pumping for irrigation during the summer and fall. When the pioneers arrived, much of the Silver Creek area was part of a large beaver meadow. A large portion of the road to Salmon Arm was built using logs as a corduroy road and it often flooded out in the spring. The year of the big flood was 1948, when much of the valley was under water.

Vegetable production in the valley was likely greatest during World War Two, when the government purchased the crops for the war effort. Many of these vegetables were first sent to a dehydrating plant and then were shipped overseas. Verna remembers one farm that employed Chinese farmworkers and the many rows of luscious tomatoes that they grew.

At one time, there were three communities in the Salmon Valley, each with their own community hall. Closest to town was the Mt Ida Hall, built in 1914, which was recently moved by Rob Fensom to his Harmonious Homestead farm and renovated. At the south end of the valley, nearer to Falkland is the decrepit, old Henden School that was later used as hall and then sold and moved to where it sits now.

Silver Creek now has two halls, with the newer Seniors Centre Hall built in 1978 just behind the Community Centre. Both halls continue to be used frequently. One of the most popular events is the monthly pancake breakfast at the Seniors Hall. Jamie Felhauer, President of the Silver Creek Community Association, reports that the community hall is regularly used for dances, martial arts classes, 4-H club meetings and birthday parties.

The community park, now managed by the CSRD, is also well used, especially by horse lovers, as it includes a riding ring. The annual Summer Stomp motorcycle rally was held at this park for 22 years until the event became too large an event. Other popular events at the park include Halloween fireworks, an Easter egg hunt and the annual wish horse ride that raises money for the Children’s Wish Foundation. [M any thanks to staff at the Salmon Arm Library and the Haney House Archives for their assistance with the research for this column.]

Unfortunately, Silver Creek’s history has not been recorded as well as other communities. The only publication about this community, “Silver Creek Ramblings,” which was published in the 1990s, provides few details other than some family histories. Consequently, no one that I spoke with was able to provide the year that their hall was built. Only through the help from the museum was this date found in the Salmon Arm Observer. This is much to glean from the micro-film archives of the Observer that can be accessed in both the Salmon Arm library and the Haney House archives, however few people are interested in history. Sadly, this resource is underutilized. I hope someday to spend some serious time going through the early years of this paper.

Further inquiries about the silver ore in Sliver Creek resulted in the news that the original bank of clay where the deposit was found is now buried in boulders. I still intend on hiking into this area to see if anything can be observed.