Rolf Walgren Bruhn in 1937 after reconstructive surgery from burns suffered in a boat accident. Photo courtesy of the Sicamous and District Museum.

George Abbott was not the first Shuswap politician that rose to prominence in Victoria. Sicamous pioneer and renowned lumberman, Rolf Wallgren Bruhn was first elected to the legislature in 1924 and during his long political career he served as a cabinet minister and became well known for his honesty, independence and sincerity. Interestingly, Abbott wrote the only biography of Bruhn that is also available online.

Born in 1878, Rolf grew up in Sweden, the son of Alex Wallgren, a Crown Reeve who after being accused of embezzlement fled alone to Canada and changed his name to Bruhn. The Wallgren family was left in dire straits and Rolf and his siblings had to work hard after school to help make ends meet. After winning a raffle, he gave the bulk of his proceeds to his mother and used the rest to buy a ticket to Canada, where he too changed his name to Bruhn. After working as a sailor on the Great Lakes, he joined his father in Malakwa where he took up a homestead and married Anna Treat, a recent immigrant from Missouri. 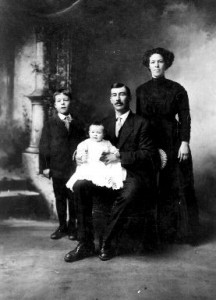 As is the case now, farmers then had to supplement their income with other jobs. Bruhn chose government roadwork and soon he became a foreman and then a superintendent. In 1910, the family moved to Salmon Arm, where four years later he also began his career in politics when he was elected as an alderman in 1914. During World War I, Bruhn supervised the construction of the road along the east shoreline of Mara Lake that was built by German internees who were camped at Two Mile and at Hummingbird Creek. 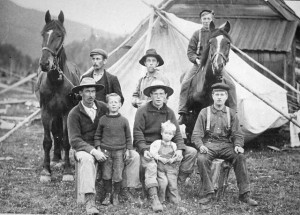 Bruhn, Highway Superintendent, seated on left. Building roads in the Malakwa area 1905-1910. Photo courtesy of the Sicamous and District Museum.

In the early 1900s, politics influenced government employment and thus when the Liberals replaced the Conservatives in 1916, Bruhn, along with other road superintendents, lost his job. He moved back to Sicamous in 1917 and started a forestry business that became his life-long venture and also helped shaped the future of the Shuswap. Beginning with selling cedar poles, Bruhn’s company grew rapidly into a diversified forest company that included poles, logs, railroad ties and lumber mills in Sicamous and Canoe.

In 1918, Bruhn suffered a major setback, when he was severely burned when an explosion destroyed his launch. He barely survived by diving into the water and during the many months of hospitalization and surgery, his wife Anna managed to keep their company going. Bruhn lived the rest of his life with major scars that required special care, but also served as a sign of his courage and dynamism.

When the redistribution of provincial electoral boundaries resulted in a new riding for Salmon Arm, Bruhn decided to run for the Conservatives. Even though the Liberals regained power in 1924, Salmon Arm elected Bruhn, who served his constituency well with his independent, non-partisan approach that even included voting at times to support Liberal government bills. Despite his maverick approach, he was unanimously nominated again in 1928 and won that election with an overwhelming majority.

Finally, the Conservative Party regained power after 12 years in opposition and Bruhn was appointed the President of the Executive Council. When the depression hit, he advocated for using unemployment relief for public works projects including the construction of the Trans-Canada highway. In 1930, he was chosen to be the Minister of Public Works, which became exceedingly frustrating as much needed federal funding was difficult to access and public work camps were closed and replaced by direct relief.

Bruhn’s timber business also suffered during the depression and at times he ran his company at a loss just to keep his workers and suppliers employed. He also frequently provided his own funds to assist families in need. Despite being a conservative, Bruhn advocated for public works and minimum wages, all too radical for his colleagues. When he supported his constituents’ request for a coalition, it was rejected and he resigned from the party to serve as an independent.

As a backbencher, Bruhn had more time to focus on his businesses. He sold the Canoe mill in 1936 and purchased a home in Vancouver where he became busy with mining projects and took time off to travel. Just prior to the 1941 election, Bruhn returned to the Conservative party and when they joined with the Liberals in a coalition government he once again became the Minister of Public Works until he passed away suddenly from a stroke in 1942. The Shuswap region was fortunate to be served by a pioneer politician and businessman with so much integrity, energy and fairness as Rolf Bruhn. 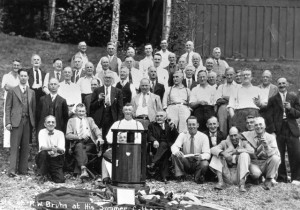 Bruhn’s 60th birthday party at his summer cottage on Shuswap lake. Photo courtesy of the Sicamous and District Museum.

Rolf Bruhn’s contribution to the Shuswap region was enormous, Not only was he a well-respected politician, he was also a community builder. His forestry enterprises employed many, including those who worked directly for his companies and those who supplied the company with materials. As a politician, Bruhn attended events throughout his riding, including many community events.

Bruhn’s non-partisan, independent politics should serve as a model to politicians today. His concern for his constituents and for the overall good of society trumped the demands of his political party. The highway bridge over the Sicamous Channel is named the Rolf Bruhn Memorial Bridge.