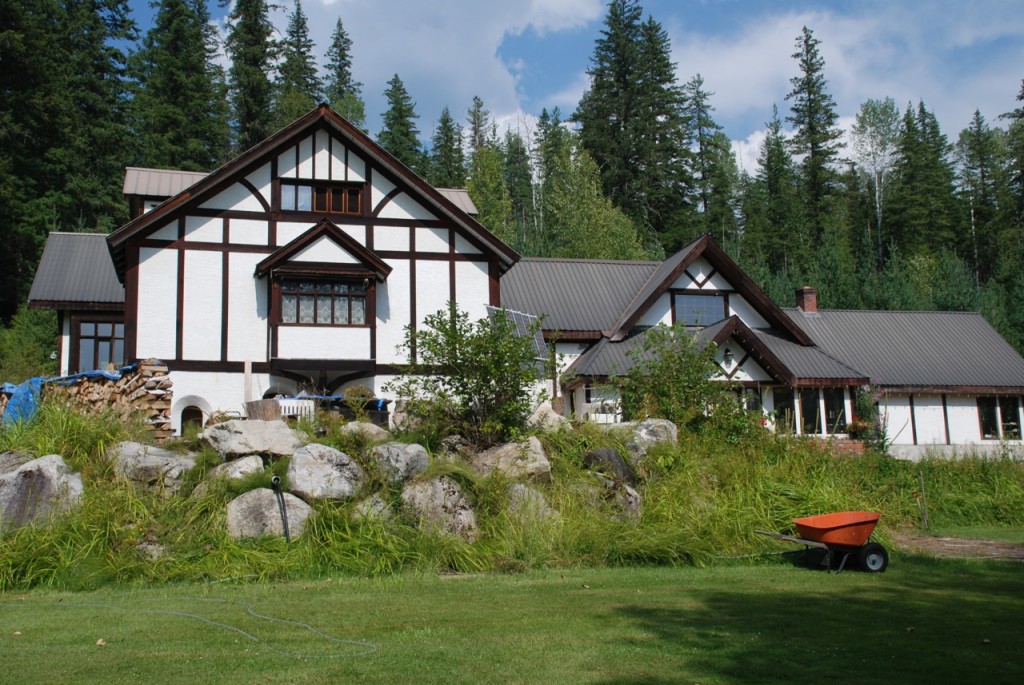 With the legendary Collings Tudor estate in Seymour Arm now for sale, it is a good time to examine more closely the work of the once very famous artist who began living there in 1910. On a recent trip to Vancouver, we visited the Uno Langmann Gallery to view a collection of Charles John Collings’ works and speak with Uno, a renowned art collector and an authority on the artist. 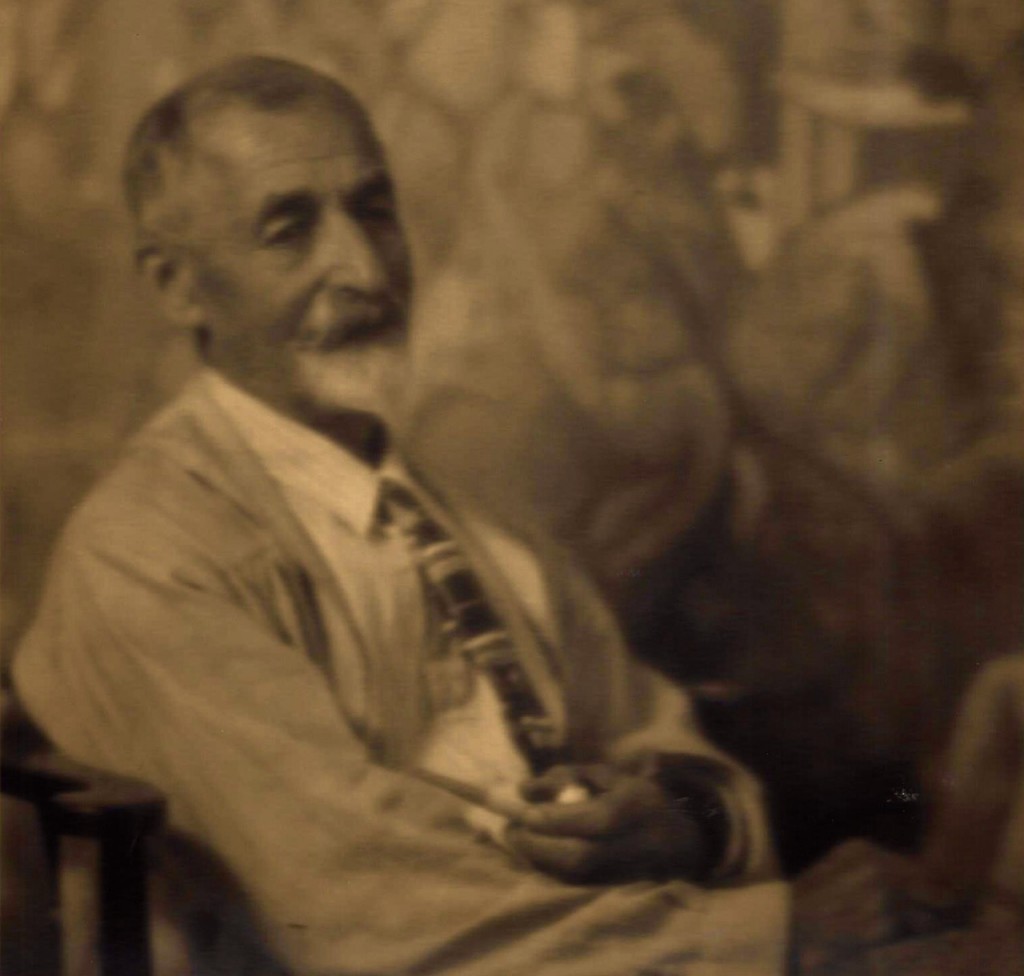 The watercolours are indeed fine works of art and range from scenes of the Shuswap, the Rockies and traditional England. The collection includes his drawings as well, which were done outdoors and used as studies for his watercolours. One of my favourites is the scene of Albas Falls, with its rich tapestry of many colours and shapes including the falls, the rocks, the trees and the ground all blended together in Collings’ unique and evocative impressionistic style. 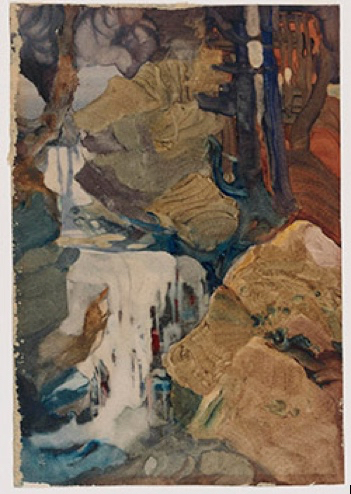 Collings’ watercolours are the finest that Uno has ever seen and ever since he purchased his first watercolour in Victoria he slowly built what is likely the largest collection from art dealers around the world.  Uno, a very generous man and a visionary donated with his wife Dianne 36 works from their Collings collection to the Vancouver Art Gallery (VAG). In 2012, the VAG mounted a show that compared the works of Emily Carr with those of Charles Collings.

In the book produced for the show, called Hope at Dawn, VAG Senior Curator Ian Thom explained that in 1927 when Collings had his only show in Vancouver, he was world famous whereas Carr was barely known, and yet the situation is in the reverse now. Carr began her career as watercolourist as well and later switched to oils. Both artists, notes Thom “found a deep sense of spirituality within the landscape…that gives each of their visions an enduring life.”

Collings, who worked for an insurance agency in England before immigrating here with his family at the age of 62, was mostly self-taught. He perfected an original technique that according to Uno, no one else has been able to master or even truly understand since. The paper was soaked in water for days and sandwiched between sheets of glass or slate. Pigments were applied to the paper and excesses were removed with a clean brush. Collings used an application of glycerine to prevent the colours from bleeding. 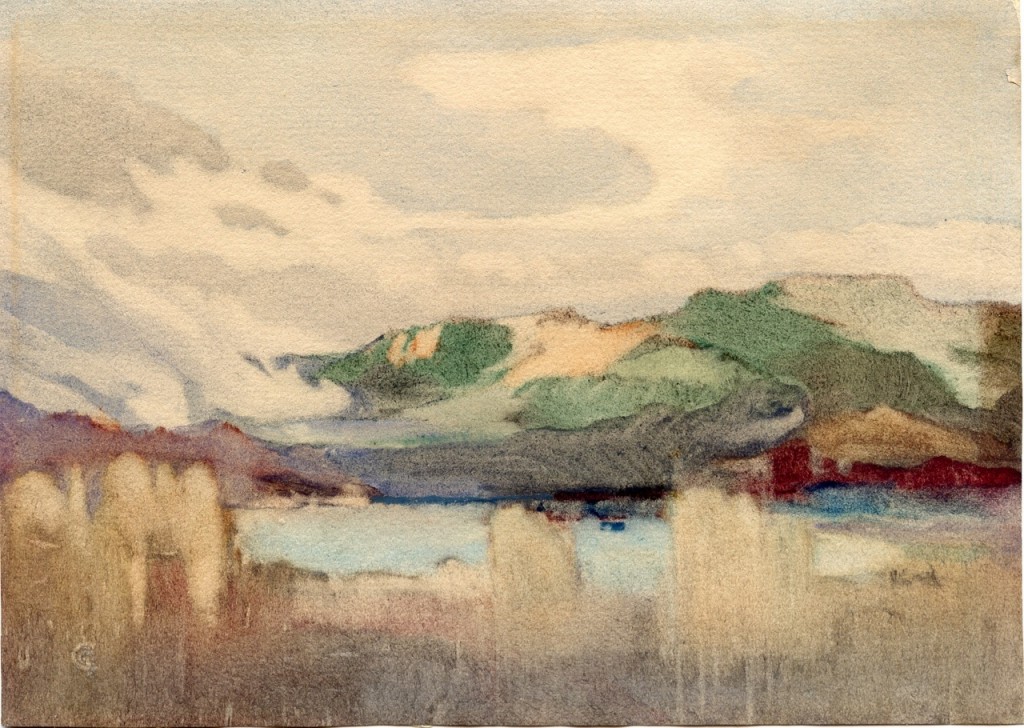 Clearing up on the Shuswap

The work, all done in his studio, was most exacting and tedious. There were many failures. One factor for his lack of recognition today, is that Collings was not prolific. Uno estimates that he only produced from 1,500 to 2,000 watercolours in total, a number far fewer than another famous watercolourist from the nineteenth century, Joseph Turner, who still had 6,000 works in his own collection at his death. 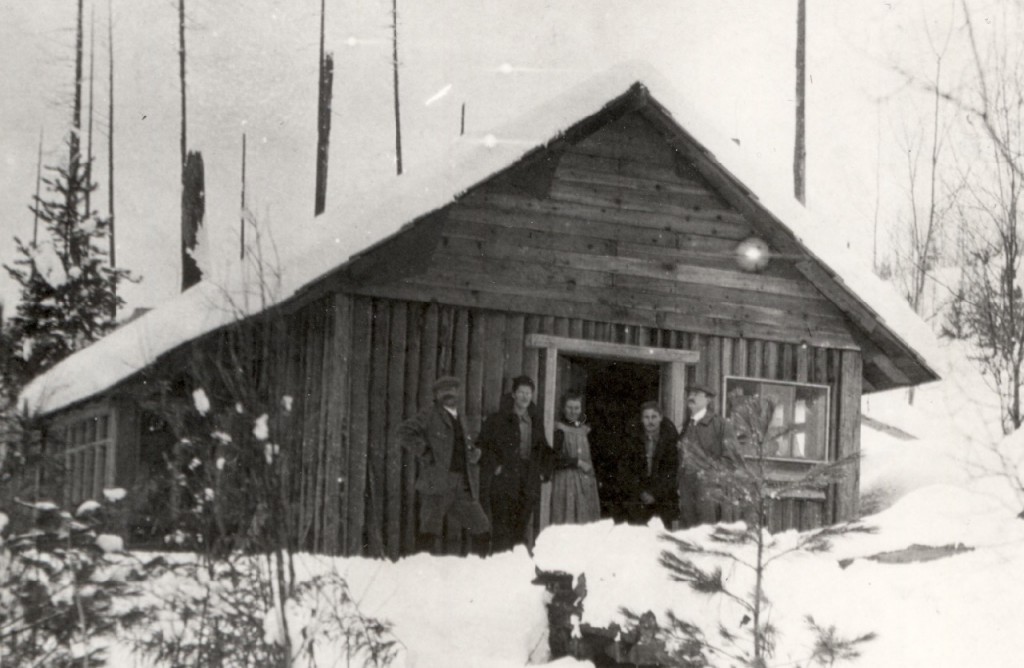 Charles, his wife Melora, his sons Guy and Carl, and one unidentified person pose in front of the newly constructed first stage of their home, Christmas, 1910. Image courtesy of the Kamloops Museum and Archives.

One of the reasons that Collings left England was that he was too often compared to Turner, so he sought to live in the wilderness where he could paint in solitude and find inspiration from the magnificent scenery. When he was not busy painting or helping his sons build the estate, Collings would hike in the mountains with his sketchpad to seek out more subject material.

Luscombe Carroll, the owner of the London gallery who sold most of his works was compelled to travel here in 1910 to find out what happened to him and determine if there would be more works to sell. He later reported how he found Collings on Christmas Eve,..living in a tent close to the beautiful Shuswap Lake, 55 miles from the railway and civilization-but happy! Meeting him thus after an interval of some years and noting the extraordinary beauty of the colour harmonies inspired by his Canadian surroundings, I was so enchanted with their magic that I determined the time had come when the world should realize his greatness and immediately arranged for an Exhibition of his work to take place at the Carroll Gallery during June, 1912. 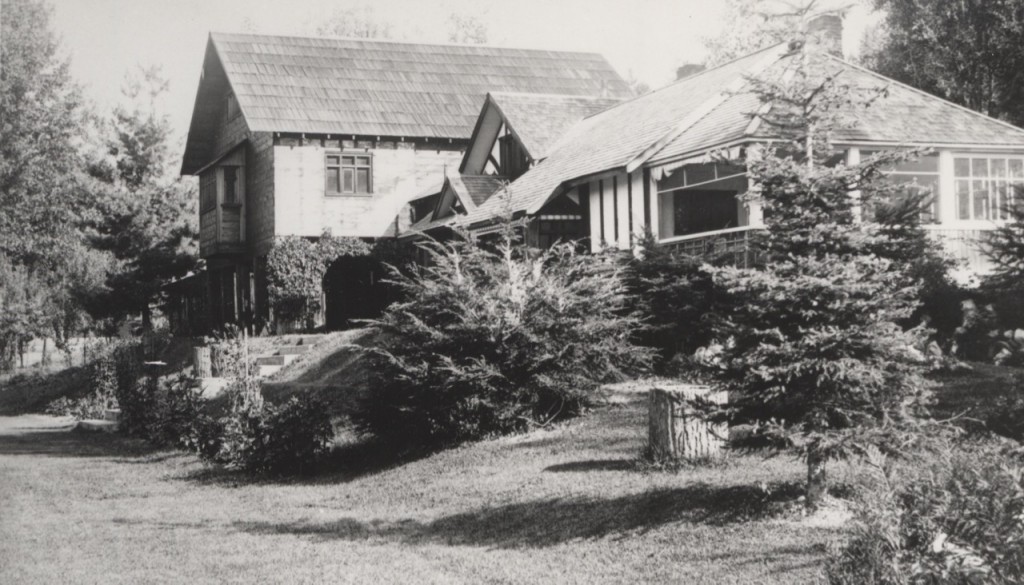 One of Carl Collings’ images of the estate, circa 1930, Image courtesy of the Kamloops Museum and Archives.

It would be wonderful if Shuswap residents could view an exhibit of Collings artwork, which was once vividly lauded by the American Art News, “Every picture is a complete poem in paint, for the author is poet and artist in one.” The exhibit could also include some of the excellent photography of the Collings Estate and other nearby scenes by Charles’ son, Carl Collings. 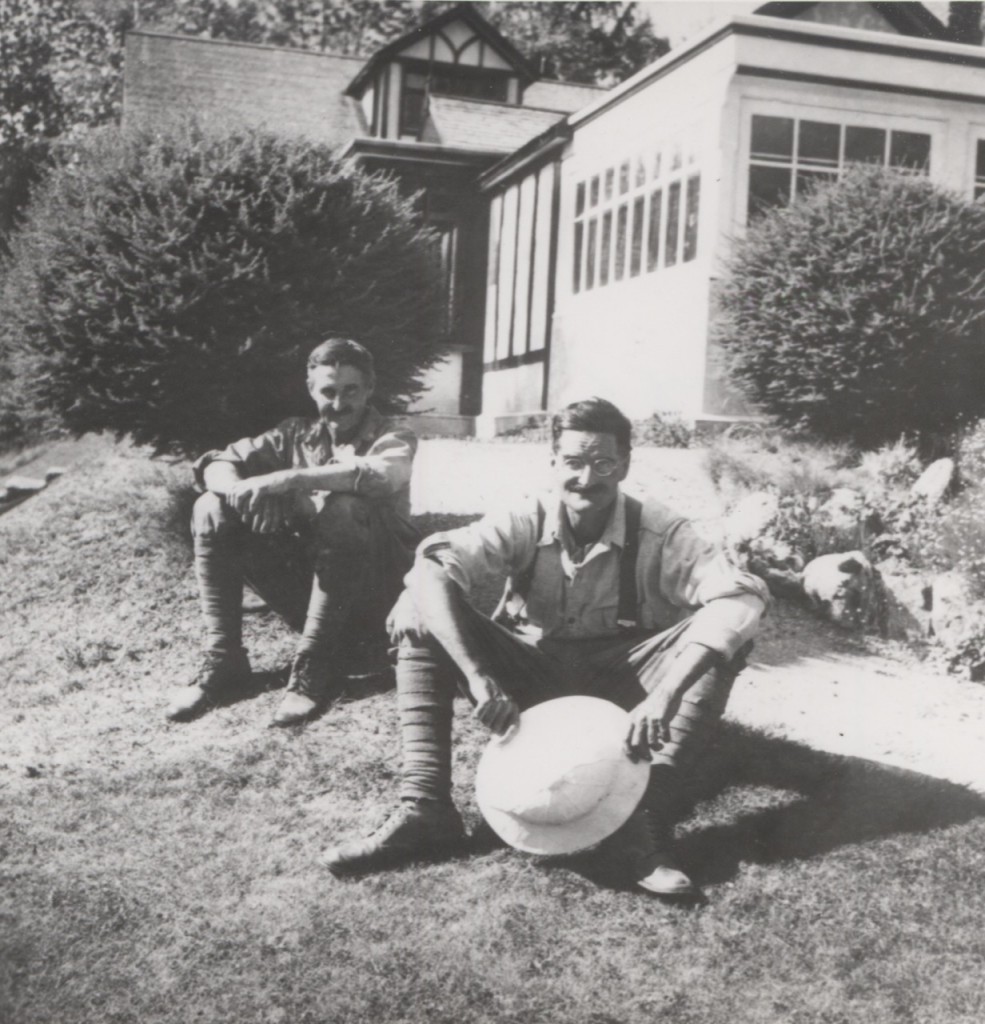 Carl and Guy Collings, Image courtesy of the Kamloops Museum and Archives.

The Collings story is most significant for the Shuswap region as it combines both local and international history with art and photography. Collings’ art is considered on par with one of Canada’s most famous painters, Emily Carr, and yet few local residents are aware of his contribution. Our local art gallery, SAGA, has a policy of only showing contemporary art that has been created within the last three years. A Collings exhibit would have to take place in another venue. The Langmann Gallery would be happy to lend their collection for a show, but much work is needed to make this happen.

When Guy Collings passed away, his close friend John Rivette inherited the estate, as Guy had no children or relatives. John painstakingly restored the house and was careful to utilize the original trim. Before John passed away, he donated all the remaining watercolours, drawings and photos to the Whyte Museum of the Canadian Rockies. According to Uno, most of these works are the drawings made before he painted the scene and some of the watercolours are the failures. Here is a link to the museum – Whyte

Here is a link to the Langmann collection – Langmann