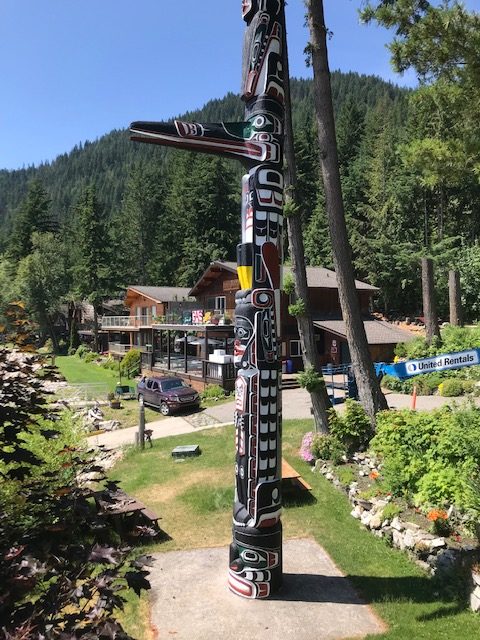 It is an incongruent sight, a giant totem pole on the shoreline of Shuswap Lake near the mouth of Bastion Creek. The pride and joy of Strata K 46 at the Totem Pole Resort, this massive work of art has a remarkable lineage and a fascinating history that is well documented in the book by retired physician Doug Armstrong called “Giants of the Pacific Northwest – The Hunt Family Totem Poles.”

The word “totem” comes from an Ojibway word “do-dain” meaning “a relative of mine.” Early anthropologists used the term “totemism” to describe primitive religions that were based on mystical relationships between humans and animals or plants. Totems are sacred objects or symbols that serve as an emblem for clans, families or tribes. 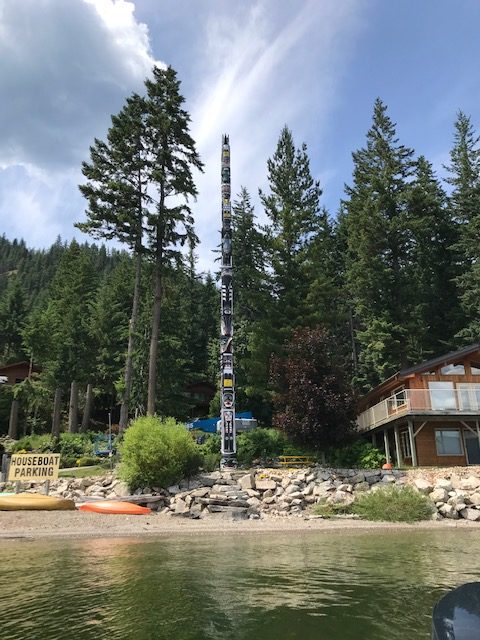 While carving of house monuments and grave monuments was part of Indigenous Pacific west coast culture for many centuries, totem poles are a relatively recent practice that began with the introduction of iron tools when Europeans arrived. The tradition reached its peak in the mid-1860s, and waned when smallpox and other diseases devasted local populations and finally died off when potlatches were banned in 1884. When the law banning potlatches was removed in 1951, totem pole carving began again.

The story behind the pole begins in 1823 when a daughter was born to the Tilingit Head Chief of Wrangell at Tongass on the southern tip of the Alaskan panhandle. Originally named Anisalaga, she became Mary and married Robert Hunt, a Hudson’s Bay company trader. They lived in Fort Rupert and when Mary’s mother died, they commissioned an 18-metre high memorial tombstone pole that was raised at her mother’s grave in Tongass after a potlatch ceremony. 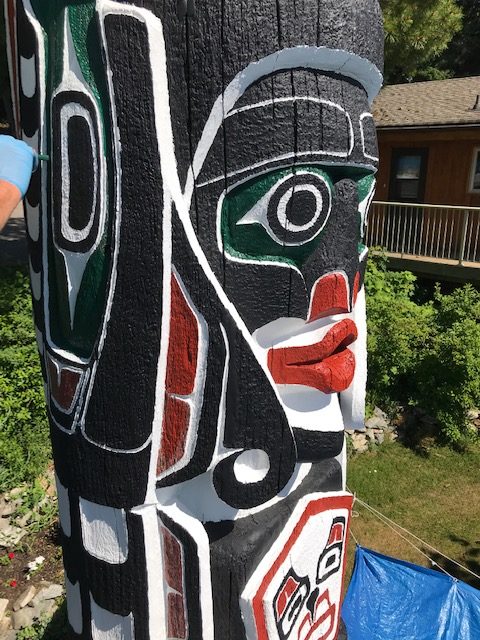 When the original Tongass pole was stolen, Mary had a second one carved by the master carver, Charlie James, in the early 1900s, which was raised in front of her grandson David’s home in Fort (Prince) Rupert. In the early 1950s, the pole was cut down due to safety issues and only two sections remain and are in storage at the Glenbow Museum in Calgary.

In 1971, Allan Dray, an Alberta based geologist who had retired from the oil business purchased what was then called the Nightingale Resort. A year later, he decided to commission a totem pole that would become a highly visible landmark for visitors and locals boating on the lake. When he inquired at the Royal BC Museum in Victoria, he was referred to the resident Chief Carver, Henry Hunt, who was initially dismissive of the request. When he presented Henry with a cheque for $13,000, the project began in earnest.

The pole began as one of four giant red cedar trees logged near Cowichan Lake and the carving was done in Victoria. Henry, who is Mary’s great-grandson, chose to incorporate Kwagiulth family crests from the original poles and two from his wife’s family. He was assisted by his son, Richard Hunt, who replaced him as the museum’s Chief Carver when he retired, and John Livingston, a master carver who grew up near the Hunt family.

The carving and painting was completed in the fall of 1973, and the 26–metre long pole was transported to the Shuswap by a specially outfitted logging truck. The plan was to float it to the resort, but at the last minute they chose to drive there over the rough road. The conditions were very wet and when they were close to the resort, the trailer slipped off the road and landed at the bottom of the slope. Allan was horrified as the pole was fractured and he left the next morning for Calgary.

Fortunately, John and Richard were not about to give up and with the help of local builders, they re-attached the two sections using a 6-metre long section of channel iron, that was covered with a cedar plank inlay. Ten days later they raised it with a crane and now, years later and after three renovations, it is considered to be one of the ten best totem poles in the world.

Due to space restraints, many key details about this story were left out of the newspaper column above. Regarding the history of totem poles, the connection between potlatches and totem poles was key. At one time, there were thousands of poles erected along the Coast from Alaska to southern Vancouver Island and Washington State. Almost all of them were raised and commemorated during a potlatch, which also including the carving of masks, the weaving of ceremonial blankets, and songs and dances, as well as gift giving by the wealthy hosts.

Politicians and missionaries misunderstood the meaning of the potlatches as they believed their were part of pagan worship of the objects and caused poverty. Often, there was excessive drinking during the events, which helped encourage the officials to ban the practice. Yet, in reality, the poles were symbols of the owner’s identity and history. By 191o most totem pole carving ceased, except by a few brave people in isolated villages including Alert Bay. Many poles were removed, cut up and sent off to distant museums.

Born in Fort Rupert in 1879, Mungo Martin is consider the father of the totem pole revival. As the age of 69, he became the lead carver at the University of British Columbia totem pole restoration program, carving replicas of deteriorated poles. In 1951, he became the first resident carver at the Royal Museum and supervised the building of the Kwagiulth Big-House, now called Thunderbird Park. The giant ,127-foot high totem pole in Beacon Hill Park was carved by Mungo and Henry Hunt, who replaced him at the museum in 1962 after Mungo’s death.

There are actually two versions of the Hunt pole history and perhaps the actual truth is somewhere between the two accounts. However, what is certain is that the first pole contained Mary’s family crests and was carved in the Kwagiulth style by master carver Charlie James. The second pole was bequeathed by Mary, who was a skilled blanket weaver, to her son George, who then gave it to his son David.

Shuswap’s Hunt family totem pole contains eight crests, six from the original pole and two from the Mungo Martin family, obtained through Henry’s wife. These crests or symbols have been passed down from family to family through maternal lines. In order from the top there are the Raven, Man Holding Frog, Seas Eagle, Grizzly Bear Holding Seal, Killer Whale, Cannibal Bird, Wild Woman, and the Two Headed Serpent.

The first restoration of the pole was done in 1988 by local handymen who built a scaffold and filled in cracks and repainted some of the structure. Eighteen years later, the second restoration involved removing lichen, moss, mildew and flaking paint, as well as applying liquid epoxy to strengthen bird-damaged wood and filling cracks and more re-painting using latex paint. There was also a massive osprey nest atop the pole, which blew down in 2001, resulting in the need for a layer of epoxy. This restoration was supervised by one of the original carvers, John Livingston, who spend 11 days on the project. The expensive costs of these projects were covered by the Strata members. 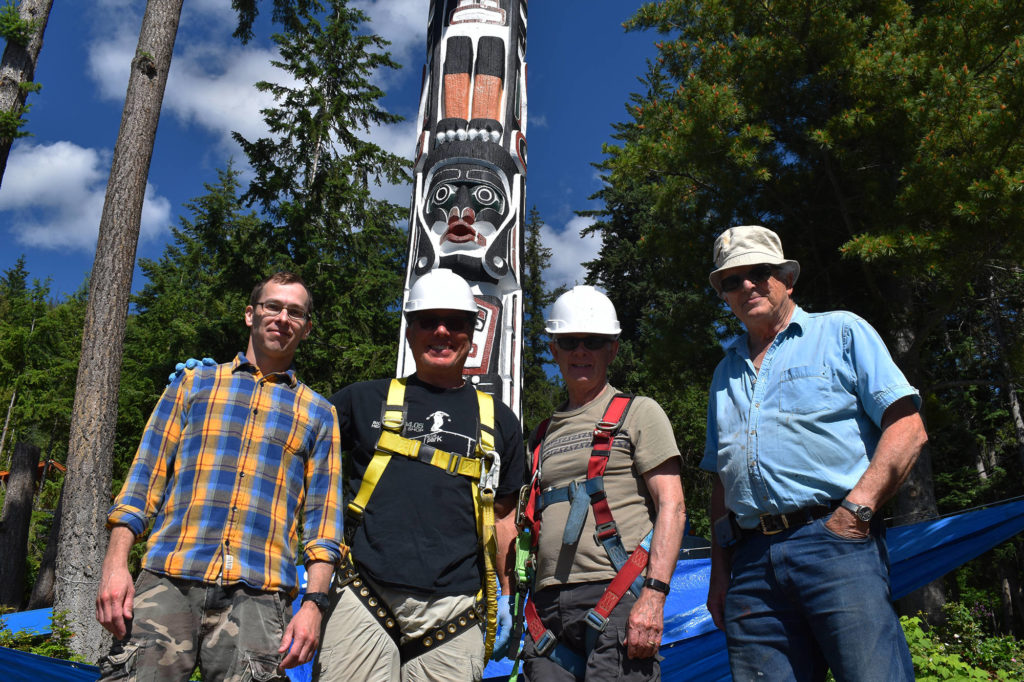 The 2019 restoration team, photo courtesy of the Salmon Arm Observer

The most recent restoration was completed earlier this year and involved more crack filling and re-painting. Author Doug Armstrong assisted with the latest project and some of the expenses were covered by the proceeds from the sales of his book. Now 47 years old, the pole will serve for many more years as an extraordinary landmark on the shore of Shuswap Lake, as Allan and Thelma Dray originally envisioned. 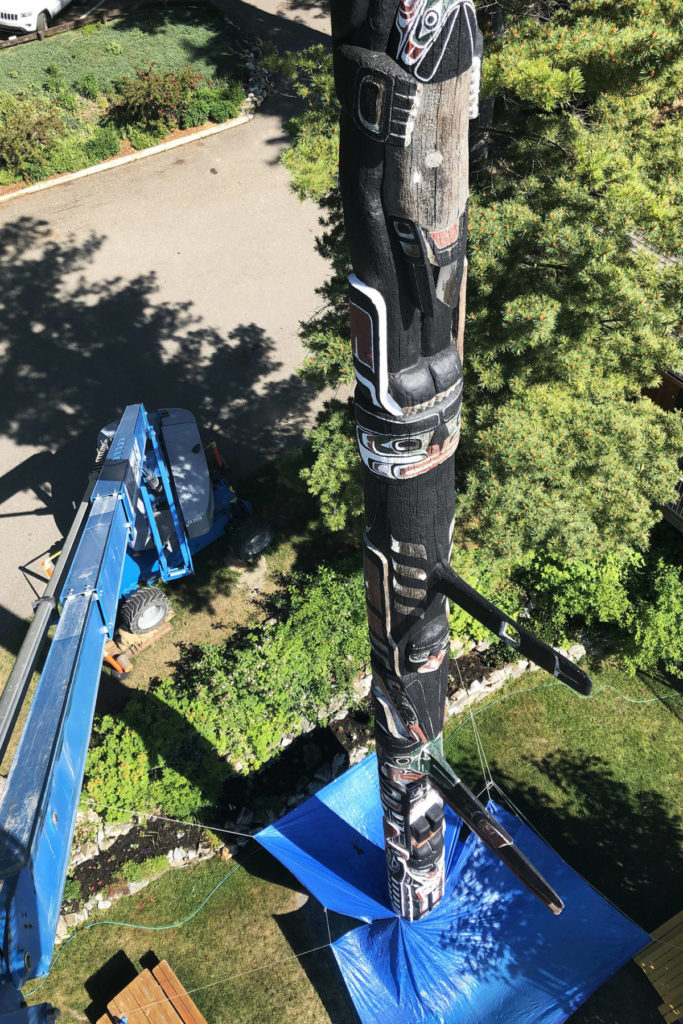 This year’s restoration was done using a hydraulic lift, photo courtesy of the Salmon Arm Observer