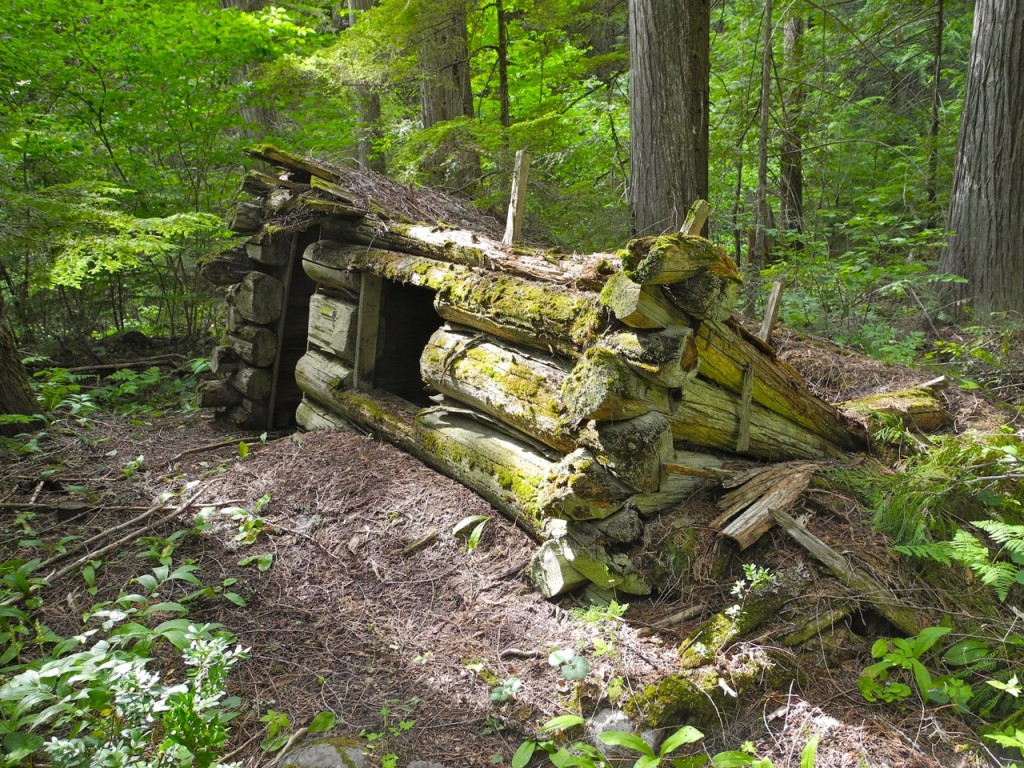 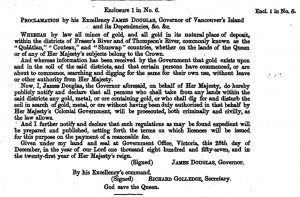 With news that the next exhibit in the R.J. Haney Heritage Village and Museum will be about gold, I began doing some research into the Shuswap gold rush that began as early as 1865, when miners began heading to the Big Bend on the Columbia River via Seymour Arm and to Cherry Creek. While the story of the gold rush town of Ogdenville, which was later named Seymour City, is well known, there is little information available about the gold mining that occurred in Scotch Creek likely by miners returning empty handed from the Big Bend. 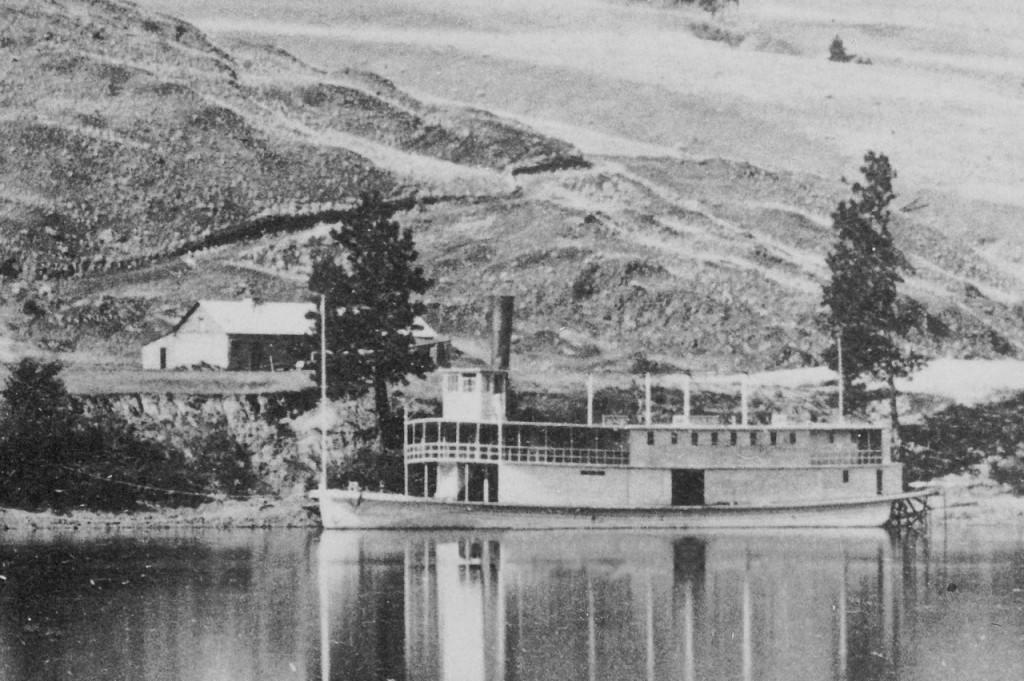 The 125 ft. long SS Marten was built on the beach of the Little Shuswap Lake in 1866 at Chase’s ranch to service the instant mining town of Seymour. Photo courtesy of the Kamloops Museum

There are just three references to the first Scotch Creek gold rush. In July of 1866, Dr. Henry Featherstone wrote to the Colonial Secretary, “When Adams Lake and Scotch [Creek} diggings were first discovered, it was thought another Williams Creek had been struck…” The Adams Lake diggings likely refer to Nikwikwaia Creek also known as Gold Creek, however despite all the prospecting, little gold was ever found there. 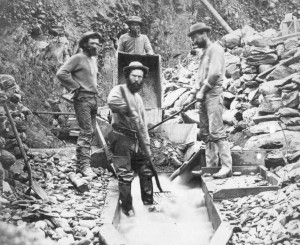 The March 5, 1867 Colonist newspaper reported, “Mining on Scotch Creek and Tranquille River will be carried on with vigor this year, and with every prospect of the most favorable results. The former has prospected well and ten claims are recorded.” In December 1871, the Colonist reported that the Scotch Creek diggings were not new and “In 1866 Dr. Chisholm found a company of men making $8 per day.” Six years later, a Geological Survey report noted, “Scotch Creek, flowing into Shuswap Lake from the north, has yielded some heavy gold, but no mining is going on there.” 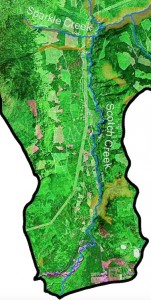 The next influx of miners to Scotch Creek occurred after the completion of the Canadian Pacific Railway line in 1885. Scotch Creek was the site of a construction camp that housed loggers and sawmill workers who were cutting timbers for the railway, many of whom were Chinese. After being laid off from their railway work, some men likely headed up the creek in search of gold via the former Secwepemc trail that was used by the first miners in the 1860s.

The Annual Reports of the Department of Mines provide some information about the second Scotch Creek gold rush. In January 1886, Mr. Dodd reported two companies making wages on a bar about ten miles from the mouth, with the gold in coarse pellets and nuggets. He also noted, “About twenty white men will winter on the creek and between fifty and sixty Chinese.”

The news was more optimistic by December 1886, when Dodd reported that Scotch Creek has become a new mining camp with prospects of future improvement, “The creek is steep and contains large rocks with make the working expensive. The supply of water is abundant. The gold is bright and heavy and sells for $17 an ounce here. My estimate of $22,000 as the yield of this creek during the past season may be taken as approximately correct.”

By the following year, the Scotch Creek gold rush was nearly over, as Dodd reported in December, “On Scotch Creek some $3,000 was taken out by white miners, who have abandoned the property and only half a dozen Chinese were left at the Creek last month.”

We can only imagine what the community of Scotch Creek looked like in the mid-1880s, as there are few clues. The February 25, 1886 Inland Sentinel reported that “20 odd whitemen and a number of Chinamen are busy preparing for active mining,” and that “the scarcity of supplies will soon be remedied as Mr. Chas E Williams is opening a large store at a convenient point for freighting and camps.” Two weeks later, the newspaper reported on the Scotch Creek stabbing case, when his partner, Charles Arbuckle after a night of drinking and fighting, stabbed William Lee.

In 1965, CBC broadcaster Imbert Orchard interviewed the legendary North Shuswap early pioneer, Jack Bischoff. In reply to the question, “When did the Scotch Creek gold digging start,” Jack replied, “I think it was in 1864.” He then went on to relate a story he heard in 1930 from an old-timer about his visit to Scotch Creek in 1886 when he witnessed a card shark trying to lead a cow on a rope up the gangplank and instead ended up in the water after the cow circled him.

From these few anecdotes, one can hypothesize that during its brief gold rush, Scotch Creek likely included a store, a saloon and other shacks left over from its days as a railway camp. There was a well-worn trail on the east side of the creek winding its way up to what is now called “Chinese flats.” Locals report that the once visible outlines of cabins are likely gone and all that can be found are piles of rocks that once directed water flows used for placer mining. A few artifacts were recovered years ago, including a vase and an opium tin. Perhaps one day, the Scotch Creek gold rush could become part of the North Shuswap’s identity, linking its past to the present and the future.

With so little information available about this extraordinary era of Shuswap history, the unknowns are most intriguing and provide an opportunity to imagine what it was like in what was likely a rough and tumble scene.

A few tidbits were left out of the column because of length restraints. The 1885 report also explained how the Zeran mining company was operating about 8 miles north of the mouth and had cut a tunnel into a quartz lode for a considerable distance. (see below).

At the end of the 1886 report is a table that provide details about all the mining going on in the province at that time. It notes that there were 16 companies, with 11 taking out gold. The average number of whites was 30 and Chinese, 45. Average wage for Whites was $3/day, for Chinese $2/day. There were 3 groups on bars, 8 working the creek, 1 in the hill and 1 in quartz. The value of the gold was $17/ounce.

Note – In early May, I plan to hike into “Chinese flats” with a few others to explore the area, make observations, and take photos. Stay tuned! 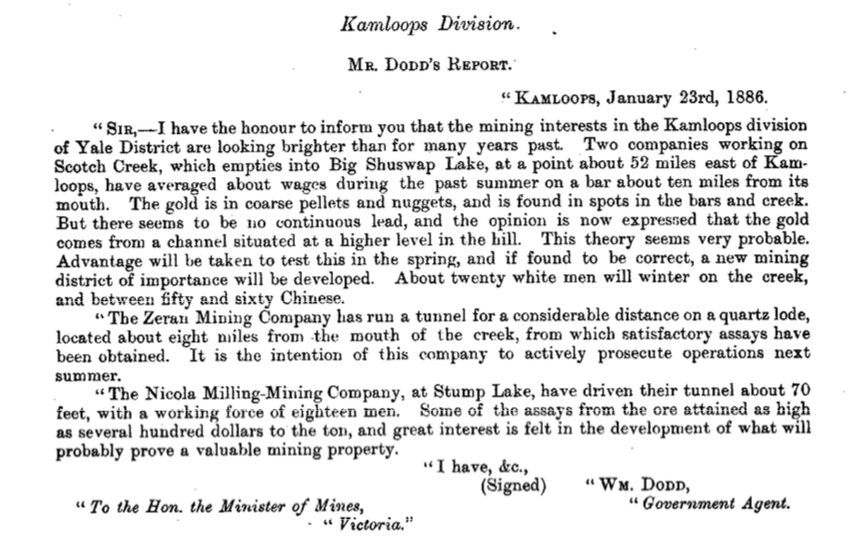