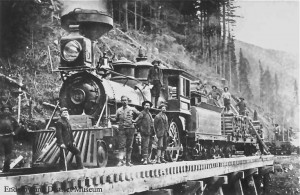 If and when the Shuswap is fortunate to have a rails-to-trail between Sicamous and Grindrod or Armstrong, it will be one of the last regions in southern B.C. to have this exceptional recreational feature. Yet, the now abandoned railway track that may become available was the province’s first spur line off the C.P.R. when it was fully completed in 1892.  The contribution that the Shuswap and Okanagan Railway made to both the settlement of our region and to the growth of the province cannot be overstated.

Early Spallumcheen rancher and government agent Moses Lumby was the driving force behind the effort to build the railroad. After, his first attempt in 1884 to convince Victoria to fund the construction was unsuccessful; he brought together a group of prominent politicians and businessmen to form a company to raise the funds needed and they successfully lobbied both the provincial and federal governments.

In 1887, a survey of the region was done for the provincial government that determined the cost for the 51-mile long railway to be $25,000 per mile and that there was more than enough farmland to provide the entire province with wheat. The surveyor also reported that he had heard “all the land is taken up” in the Spallumcheen Valley (between Mara Lake and Okanagan Lake).

Construction finally began in 1890, with the old hotel at Lambly’s Landing (soon to be re-named Enderby) the centre of the operations and eventually the first train station. With some 400 workers and a huge demand for rail ties and timbers, it was a boom time in the valley. Over half of the crew were Chinese, many of whom stayed to form communities in Enderby and the Okanagan.  A new automated track-laying machine was used that had been invented by the managing contractor and once the rail bed was prepared, they were able to lay down an average of a mile of track per day. 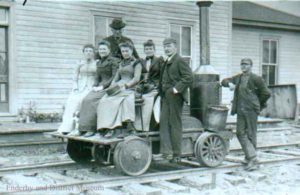 Prior to the final completion of the line, a small, steam driven flatcar known as the Kalamazoo was used to move small groups of passengers. The first passenger train to Vernon brought Lord and Lady Aberdeen in October 1891. With the railroad leased to the C.P.R. for 25 years, regular service to Okanagan Landing began in June 1892 where the sternwheeler S.S. Aberdeen provided service to Penticton. 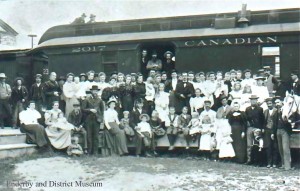 For fifteen years, there was not much freight and not many passengers, due in part to an economic downturn. The train only ran three days per week and the railway became somewhat dilapidated. However, the service was very friendly, as the train would often stop to pick up anyone who flagged it.

Slowly business picked up when the sawmill was built in Enderby and by 1905 the service was expanded to a daily operation. The major products shipped included flour, lumber, poles, bricks, fruit, grain and cattle. And with increased settlement, there were many more passengers. For over 50 years, the railroad facilitated significant economic development for the entire region from Sicamous to the Okanagan, but by the 1950s, local transportation shifted to roads and automobiles and passenger service ended. Soon trucks took over the hauling of goods and freight service ended in the 1980s. 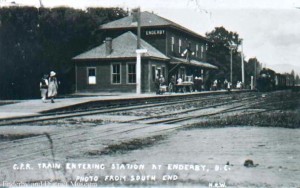 No trains have used the track from Sicamous to Armstrong since 2009. Discussions between local governments, the province, the Splatsin Nation and the C.P.R. regarding the sale of the railway land have taken place, but appear now to be stalled. While there does appear to be agreement for a linear corridor, the SureCrop Feed Plant in Grindrod would like to see rail service resumed to Armstrong.

A rail-to-trail corridor between Sicamous and Enderby would be a huge boon for the Shuswap tourism industry. The scenic route on the west side of Mara Lake would entice cyclists and hikers from afar and would provide an attraction during the spring and fall when more tourism is needed. The route would need to be closely monitored to prevent it from being damaged by motorized vehicles. Hopefully, one day our region will benefit once again by the Shuswap and Okanagan Railway corridor that opened the valleys up to development.

What a difference the railway made to the first settlers, who up until then had relied on steamboats and horses for transportation. It is very significant that the Spallumcheen and Okanagan Valleys were deemed important enough then to warrant the first spur line off the new C.R.R. The 1887 survey was done by A.S. Farwell and his report provides insightful description of the region and its agricultural potential.

Farwell included quotes from George Dawson 1877 Geological Survey Report, including this one:

“The Spallumcheen Valley, running from the north end of Okanagan Lake to the Spallumcheen Arm of the Shuswap Lake, is already an agricultural district of some importance, and constitutes the largest area of available land found together in any one valley of the interior of the southern part of the Province.  The portion of the valley examined (south end) is partly prairie land, most of which is taken up, and partly wooded. The climate is such that without irrigation fine crops of all sorts can be raised. The soil of the lower benches and bottoms is clayey, deep and rich; that of the higher levels is lighter, but still good. The sub-soil shows a tendency to resemble the white silt deposit, but it is not well characterized as such.”

It is amazing that the land was mostly taken up as early as 1877.  Also, Dawson describes some of the Spallumcheen  as “prairie land.” It is no wonder that the land was settled first, as there was no need to clear the trees and they could plow the ground up and plant right away.

Farwell estimated that in the entire region from the Boundary to the Shuswap there was 300,000 acres suitable for growing wheat without irrigation. Estimates are provided for specific townships and sub-regions, including Salmon River Valley (12,000 acres), White Valley (near Lumby – 10,000 acres) and Shuswap River north of Enderby (10,000 acres).

It would be a real delight to cycle from Sicamous to Enderby. The views along Mara Lake would be awe inspiring and there could be a side trail on the west side of Rosemond Lake at the southern end of Mara Lake. Also, there could be trails in the peninsula that nearly divides Mara Lake in half. The section along the Shuswap River would also be incredibly scenic, with views of the rich farmland and the Enderby Cliffs. 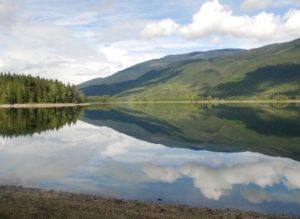