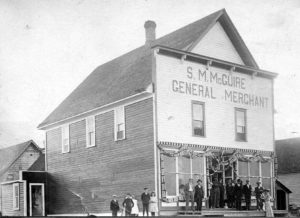 The first regions of the Shuswap to be settled were those with the best agricultural potential and the best access.  The extensive natural grasslands adjacent to the fur brigade trail between Fort Kamloops and the Okanagan prompted the beginning of the Shuswap’s first permanent settlement of Grand Prairie, now Westwold, in 1864. Soon after, Whitfield Chase purchased his acreage from former fur trader John Todd and in 1867 Alexander Fortune pre-empted land just south of where Enderby is today. Although settlement occurred far later for what is now the Shuswap’s largest community, Salmon Arm, it progressed rapidly after the Canadian Pacific Railway was completed in 1886.

It is difficult to comprehend why anyone would choose to settle in or near Salmon Arm in those early days, as the area was densely treed with massive cedar and cottonwood trees and laden with mosquitoes in the summers. Nonetheless, once a few hardy souls began to homestead the rich valley bottomland adjacent to the Salmon River, many more soon arrived. To facilitate settlement, the government surveyed the Salmon Valley in 1887, with the first settler arriving the following year. By 1890, with nearly 200 settlers there was a school, a general store, and a post office and the first bridge was built across the Salmon River.

There is no doubt clearing land in those early days was brutally difficult without the benefit of machinery or stumping powder. Many of the larger stumps remained in the fields for years. Yet the early yields were reportedly huge and within a few years the farmers were shipping produce via the CPR. One of the advantages that the Shuswap had over the drier Okanagan and Thompson regions was the greater annual rainfall, which meant that irrigation was not necessary. 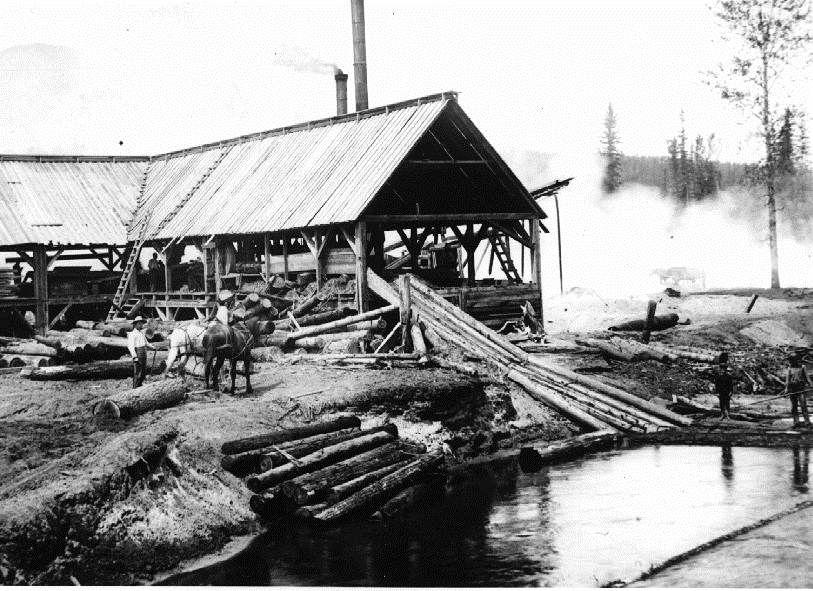 Key to the success of the early settlement was the establishment of the local sawmills that provided both employment and some cash for the logs from land clearing. The first mill was set up at the Tappen Siding by the Genelle Brothers in 1887, which was moved three miles east to Kault in 1894.  A portable mill was set up in the Salmon Valley in 1892, which was later moved closer to town and expanded into a permanent mill that by 1909 was the community’s largest employer. One of the unfortunate impacts from the pioneer forest industry was the annual spring log drive down the Salmon River that scoured the salmon spawning beds.

Despite the early success with mixed vegetable and berry farming, including tomatoes and strawberries, problems soon developed. Inconsistent weather, competition from south of the border and the expense of shipping the produce to markets induced settlers to switch to dairying and general farming. Many of the early settlers emigrated from England with the expectation of growing fruit and soon after the first apple trees were planted in 1891, the bench lands became dotted with orchards.

There was one characteristic more than any other that encouraged the steady settlement growth in those early days, and that was the pioneers’ commitment to community and cooperation. The settlers worked together to build local roads, set up schools and churches and develop community associations. Two agricultural associations were formed in 1896 and the first fall fair was held the following year.  One of the first organizations formed was a chapter of the temperance movement in 1893, followed by a chapter of the Orange Lodge in 1894, which built a hall in town the following year. And the Women’s Institute that formed in 1909 was the first one in the B.C. interior.

The pioneer economy also depended on continued cooperative efforts. In 1907, the fruit growers organized the Salmon Arm Farmers’ Exchange, which five years later shipped out over 20,000 boxes of apples and 2,000 boxes of plums and pears. Similarly, the dairy farmers formed a creamery association in 1915 that soon after constructed its own processing facility.

It also took cooperation to survive the calamities that struck in 1894. Massive flooding inundated half the valley and covered the railway tracks. Then in July, a huge fire that began in a smouldering slash pile at the base of Mt. Ida sped through the valley destroying the sawmill and many farms.

As more settlers moved into the valley and hillsides, the village of Salmon Arm grew rapidly to service the surrounding farming community.  By 1904, with news that nearby Enderby had become a city, a committee formed to incorporate Salmon Arm. In May 1905, the Municipality of Salmon Arm was proclaimed. Over the succeeding 107 years, dedication to community was continuous in Salmon Arm and the surrounding region, with such successful and diverse groups as the Salmar Community Association, the Roots and Blues Festival, the Shuswap Community Foundation and the Shuswap Trail Alliance.

There was likely a temporary settlement during the railway construction phase located alongside the tracks near where the CPR station is today. However, there is no mention of this in any of the histories of the town. Interestingly, while nearly every community in the Shuswap has a fairly comprehensive history book, none exists as yet for Salmon Arm. While there are a few pictorial history books and one dated and rather concise book by Ernest Doe, there is need for a detailed, all-inclusive volume that begins with the Secwepemc people and ends in this century.

According to the Doe history, the first white man to settle in the Valley was A. J. Hedgeman in 1888. Prior to this, T.H. Hatherly homesteaded in Sunnybrae in 1885. He was influenced by the notion that the CPR would bridge the lake from Engineer’s Point to Sunnybrae instead of continuing around the lakeshore. The first settler in the area that was to become the city, was a German by the name of “Swordfighter” in 1885. His log cabin was purchased the following year by H.C. Fraser.